Since he became Prime Minister, Boris Johnson has spent a lot of money.

COVID-19 has led to expenditure and borrowing on an unprecedented scale, but much of this spend has been – to use his words – spaffed up against the wall.

Here is a summary of just how much taxpayers’ money he has wasted or committed to be wasted, including a running total in red.

‘Get Ready for Brexit’ Campaign

This campaign started ahead of the 2019 General Election, when Johnson blurred the lines between Government information communication and political advertising with his £100 million ‘Get Ready For Brexit’ advertising.

The adverts pushed a pro-Brexit message and was a waste of money, according to the National Audit Office. In a report into the campaigning, the independent watchdog found that it had “limited impact” because it was attempting to deal with issues that were not “manageable and resolvable”.

The campaign was pulled early, at the end of October 2019, but an estimated £75 million had already been spent on it.

Johnson needed to keep the newspapers – which had suffered a substantial loss in profits – on side during the Coronavirus lockdown and so gifted them £35 million in COVID-19 advertising and advertorials. Even the Guardian took the questionable cash.

Compliant newspapers studiously ignoring his initial ‘herd immunity strategy’ and shocking mishandling of social distancing was of note. But, finally, Health Secretary Matt Hancock and Public Health England’s inability to provide personal protective equipment for the NHS was too much even for the most mainstream press to sideline.

The Government awarded £3 million to a small consultancy run by two New Zealanders that have a background in right-wing political campaigns, Sean Topham and Ben Guerin to deliver digital content around the Coronavirus.

As part of his headline-grabbing claims for testing, Matt Hancock rushed to buy £16 million worth of antibody tests from China that proved to be faulty.

After the debacle of the faulty tests, the Government ordered 10 million tests from Roche and Abbott. Costs were not disclosed, but the British Medical Journal (BMJ) reported that “there is evidence to indicate the NHS will spend £79 per test”.

These tests are likely to be a waste of money as there is little evidence about how long immunity lasts for those who have had the Coronavirus.

The BMJ cited a reader in microbial pathogenesis at the University of Bath who said that the tests were a waste of money because “they are much more accurate if used 14 days after symptoms arise, but currently people with symptoms are told to self-isolate for 14 days anyway, making taking a test moot”.

On 8 July, the Treasury  revealed that the Government had spent £15 billion on PPE – a huge amount for a bungled operation that led to the UK having more health and care worker deaths than anywhere else in Europe, according to Amnesty and Medscape.

Many companies with proven track records offered to make or obtain PPE, but most were rejected or ignored by Public Health England (PHE) and the Government. Instead, rules for emergency procurement were used to commission many other companies that had no experience and little or no trading history. These included: Luxe Lifestyle Ltd, which was awarded a £25 million contract with no employees or experience; Aventis Solutions Ltd, a recruitment company given £18.48 million with only net assets of £322; PestFix Ltd, with assets of just £18,000 awarded a contract for more than £108 million; and Excalibar Ltd, which was only incorporated as a company in January 2020.

This led to significant costs, according to procurement expert Bernedette Spofforth. Writing in Byline Times on PPE procurement, she observed that “PHE agreed to set prices at the height of demand for products” – which meant that it would have been paying up to 70c for a simple surgical mask even four weeks later when the prices had dropped to 15c.

Therefore, a conservative estimate is that at least half of the £15 billion spent on PPE has been wasted and probably much more.

The Government and NHSX – a unit formed from the Department of Health and Social Care and NHS England to “drive the digital transformation of care” – were determined to create a tracing app for the Coronavirus that held data centrally, unlike other countries.

This was part of the Boris Johnson administration’s ‘world beating’ test and trace programme. However, after a trial in the Isle of Wight, it announced that it would instead be using the Apple and Google app that many other countries had already adopted. Matt Hancock said that the Government’s app was now viewed only as “the cherry on the cake” of a test and trace system. It wasted £11.8 million in the process.

Taxpayers have had to pay £10 billion so far for a test and trace system that is still not working effectively.

In areas of northern England – where infection rates have been a concern – a leaked Government report showed that only 52% of the close contacts of people who tested positive for the Coronavirus were being reached in Blackburn and Darwen, and less than half in Oldham, St Helens, Manchester and Rochdale.

A test and trace system that is so ineffective is certainly not good value for its £10 billion cost – particularly as it was outsourced to Serco to establish and completely bypassed GPs and local communities that could have provided a more locally effective programme.

A Spaffometer score of £5 billion seems generous to the Government.

Hospitals with No Patients

In April, seven Nightingale hospitals were set up and operated for the first three months of the Coronavirus crisis at an estimated cost of £346 million, according to the Health Service Journal.

Only two of the hospitals actually admitted patients and, even then, very few.

The London Nightingale treated 54 patients in total. Almost a third of the cash – £108 million – was earmarked for the Birmingham hospital, even though it has treated no patients.

This £800 million initiative is the brainchild of the Prime Minister’s controversial chief advisor and is modelled on the Advanced Research Projects Agency (ARPA) in the US.

Based on his and Johnson’s track record, it is reasonable to conclude that the money for this pet project is likely to be spaffed up the wall in terms of delivering anything of value for the British people.

To avoid participating in the EU’s Galileo programme, Dominic Cummings has persuaded Boris Johnson to commit £500 million to a consortium bailing out the global communications company, One Web, to enable it to build a rival Global Navigation Satellite System.

This is a complete waste of money as this system could only ever be a back up for Galileo and, if the UK lost access to Galileo, it would cost the UK economy an estimated £1 billion a day or one-sixth of its GDP.

Although negotiations are still in play, the Government has stated that if no agreement is reached with the EU by the end of the year, Britain will leave without a withdrawal agreement.

The Organisation for Economic Co-operation and Development (OECD) has warned that a ‘no deal’ scenario could subtract more than 2% of the UK’s GDP over two years – equating to £40 billion. The problem is that, if a ‘no deal’ Brexit occurs, it will probably be impossible to know how much it will have cost the UK because of the impact on the economy of the Coronavirus crisis.

The Cabinet Office Minister Michael Gove has announced a £705 million budget to help manage border controls ready for leaving the EU at the end of the year.

This would be unnecessary if the Government wasn’t pushing Britain into a ‘hard Brexit’. It is unclear whether this budget includes provision for the world’s largest lorry park at Dover.

The Home Office has revealed that it spent £11 million on “additional passport costs” in moving to the ‘patriotic’ blue passports which hark back to when Britain ‘ruled the waves’.

A small price to pay to put a smile back on the faces of Brexiters as they fly to Madeira.

As exclusively revealed by Byline Times, the Home Office has been given an extra £1.3 billion a year for the transition to Brexit.

This includes £480 million for Brexit transition work in 2019/20 with an additional £121.6 million for ‘no deal’ Brexit preparations and £4.7 million from across Government. Additionally, £695.2 million has been allocated for “transitional activity” in 2020/21.

Last September, Parliament’s Public Accounts Committee found that up to £100 million of contracts had been given to just six major consultancies that all involved shaping Brexit policy – normally a job done by Whitehall and unusual to outsource.

Worse, the committee found that the Government had not declared the contracts within the 90 days guidelines, perhaps in an attempt to conceal them. 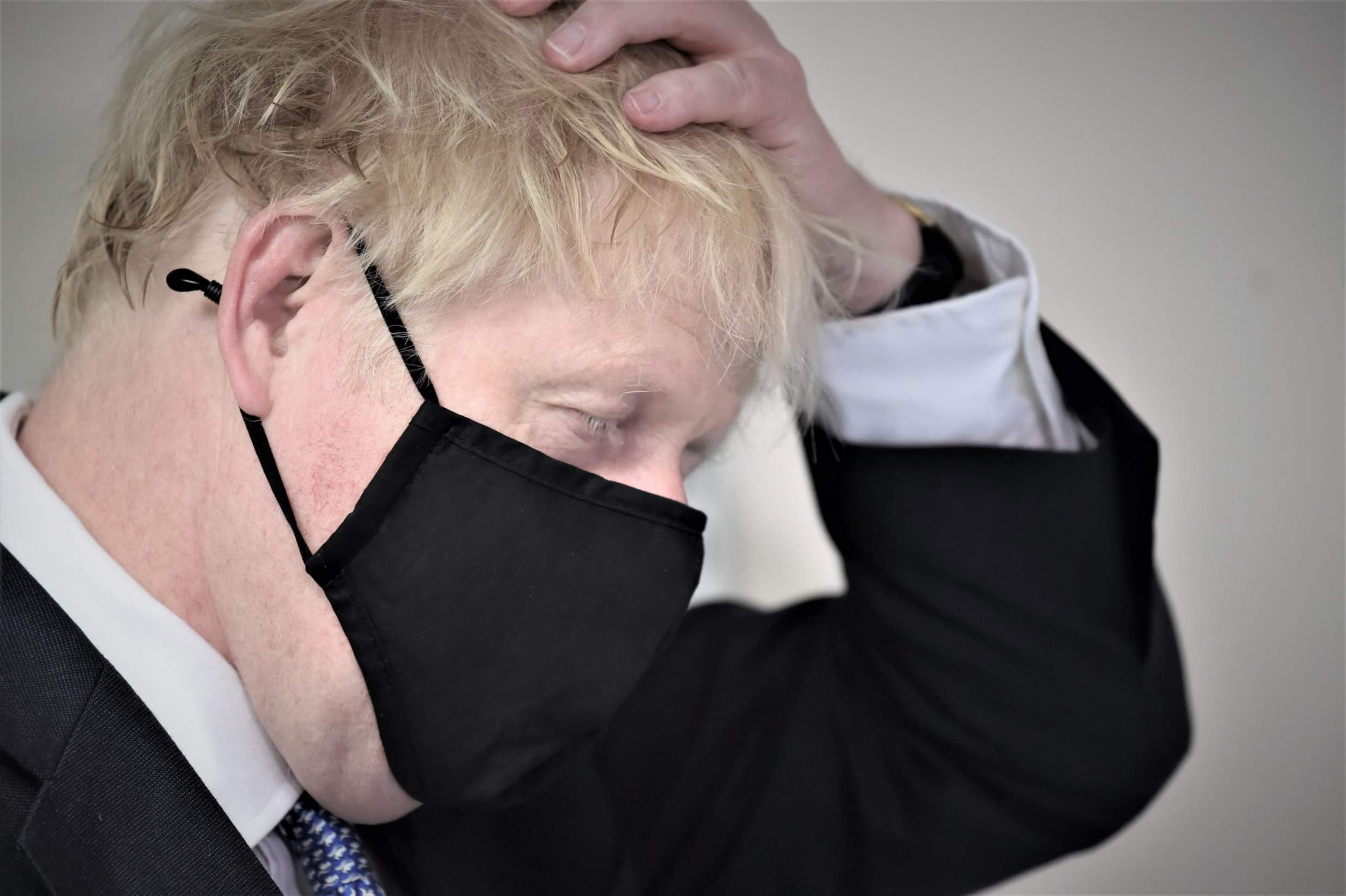 Hell of a YearBritain Under Johnson’s Rule

The £57.193 billion total doesn’t include other wasted costs that are difficult to assess or verify.

The testing programme commissioned to Deloitte consistently under-performed against targets, NHS volunteers only helped very few people, and no doubt there will be many more questionable procurements that will be revealed in due course.

There is also evidence that some Government ‘bounce back’ loans have been subject to fraud and, more worryingly, that the Government seems to be missing the opportunity to use business loans to help the green economy grow and is wasting support on polluters.

With the information we do have, it looks like Boris Johnson has wasted more money in his first year in office than any other Prime Minister in living memory.