As British troops fly out to aid their Polish allies, the thousands of hungry, cold and frightened people amassed on the Polish-Belarusian border are increasingly pawns in a populist political game

The European Union (EU) has agreed to impose more sanctions on Belarus as tensions mount at the country’s border with Poland.

Between 5,000 and 20,000 people remain trapped in makeshift encampments in the forest, caught between Belarusian and Polish forces, having already fled the violence in their home countries such as Iraq and Afghanistan. At least nine people have been killed.

Hungry, freezing and afraid, they are pawns in a political chessboard between East and West, Russia and the European Union (EU).

Meanwhile, the UK Government has sent 10 military troops to the Poland/Belarus border, after Poland refused support from the EU Frontex Border Force.The deployment decision demonstrates the closeness between the two nations, both of which are in dispute with the EU.

Johnson recently spoke to Poland’s Prime Minister Mateus Morawiecki ahead of the COP26 Conference, with the two finding common cause regarding rows with the European Court of Justice.

Poland has rejected help from the EU’s Frontex in part, analysts argue, because Europe’s often brutal border force is still governed by laws and regulations. Instead, the Government has declared a state of emergency – forbidding Polish citizens from providing material aid to the arriving migrants, arresting journalists, and ordering illegal pushbacks.

It has, however, accepted help from its UK ally. Whitehall sources quoted in the Guardian said it was appropriate to consider helping Poland given that “it is Belarus that is pushing migrants towards the border.”

Human rights groups have criticised the decision to send UK troops to the border. Steve Valdez-Symonds, Amnesty International UK’s Refugee and Migrant Rights Director, said in a statement: “sending British soldiers to erect more border fences rather than address the needs of people dying at those borders shows a shocking disregard for both human life and the right of people to seek asylum.”

This, Valdez-Symonds continued, is in keeping with the UK Government’s wider approach to migration. The decision to help push back people seeking asylum, he said “is completely in tune with UK asylum policies and action elsewhere, including at our own borders.”

Pawns on the Chessboard

In summer 2020, all eyes were on Europe’s “last dictatorship”, as Belarus’ erstwhile leader Alexander Lukashenko claimed to win the nation’s election with 80% of the vote. The results were met with protests that erupted across the country. Opposition leader Sviatlana Tsikhanouskaya was forced to flee to neighbouring Lithuania, while her husband was put on trial. Her fellow opposition leader, Veronika Tsepkalo, also left Belarus.

Lukashenko cracked down on the protests with violence and repression. There were allegations of torture, including rape. The third female opposition leader Maria Kolesnikova was jailed, journalists were imprisoned, and a Ryanair flight was diverted to arrest dissident Roman Protasevich – later paraded on state TV confessing to numerous crimes. The head of a Belarusian exiles group, Vitaly Shishov, was found dead in Ukraine.

Sanctions were duly imposed on the country, which borders the European Union, Russia, and Ukraine. This led to Lukashenko warning Western powers that, “we stopped drugs and migrants. Now you will eat them and catch them yourselves”. Since then, the dictatorship has been prodding people seeking asylum towards the Belarus/Poland border fence. Anyone who tries to turn back is met with violence.

On one side of the border fence, Lukashenko is sticking two fingers up to the west with the backing of his allies in the Kremlin. The latter is amassing troops on the Russian border with Ukraine, with the Pentagon warning that an invasion could be on the horizon. Lukashenko has already signalled his loyalty by deploying special forces on the Belarus/Ukraine border, staging provocative military exercises and welcoming nuclear-capable Russian bombers into its airspace. The manoeuvres on that second border are crucial to understanding the wider geopolitical consequences of the actions in Poland.

On the other side of the border fence is Poland and the EU – towards which Russia has taken an increasingly antagonistic and belligerent stance.

No wonder, then, that Morawiecki accused Putin as being the “mastermind” of the border crisis.

But neither is Poland that popular with the rest of Europe right now, making its UK alliance even more vital. The increasingly authoritarian Government is heavily invested in anti-migrant rhetoric. It has weakened judicial independence and the free press, and has faced criticism for its anti-LGBTIQ and anti-abortion policies.

That lack of press freedom is evidenced by a ban on Polish media accessing the border, with the Deputy Minister of Foreign Affairs justifying the decision by saying: “it is not the media’s access to a given place that is crucial here, but the message.” Writing in Wyborcza, journalist Roman Imielski explained how the minister was effectively saying “if we admit journalists to the border, they should convey not the truth, but the message that the rulers want”. Where journalists have been present, they have allegedly been attacked by Polish troops. 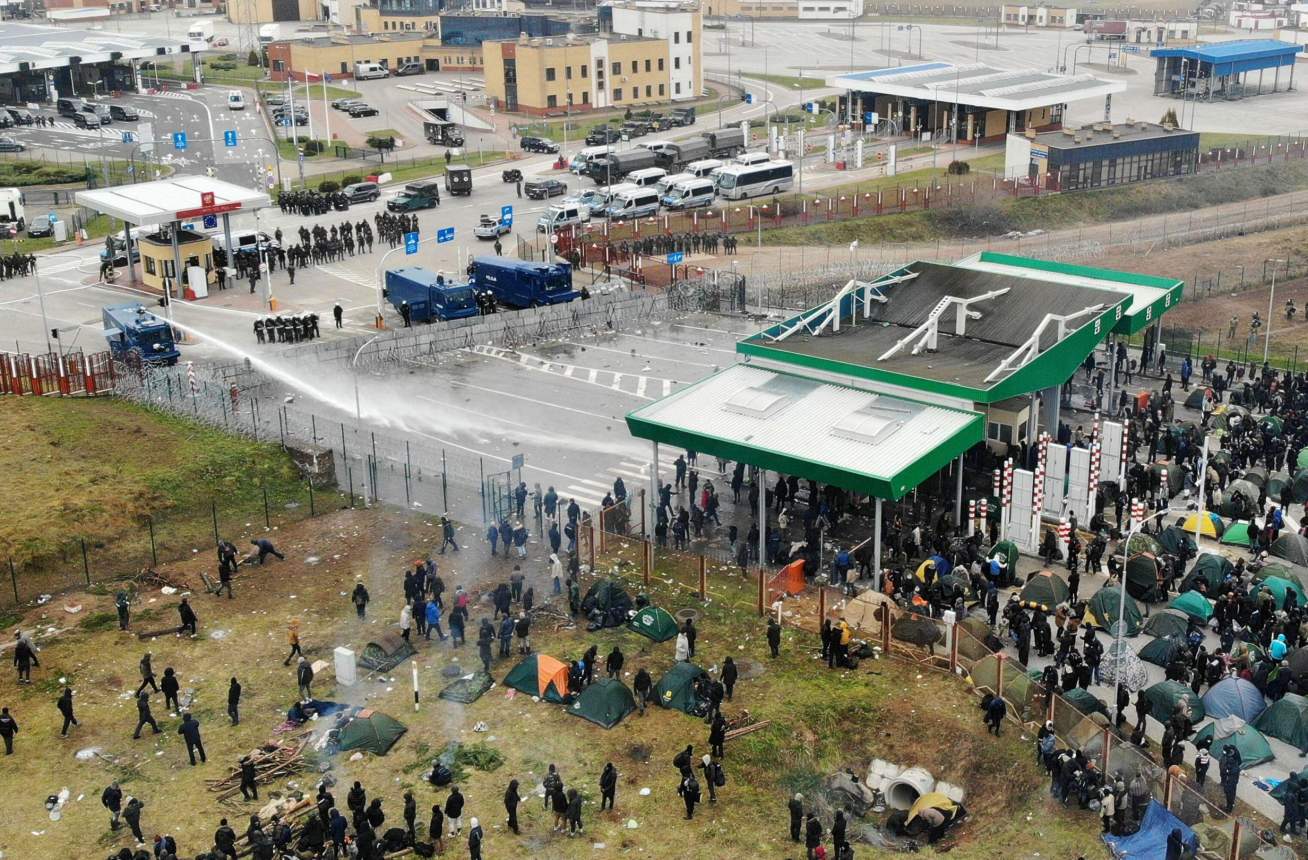 Could the Migrant Crisis on the Belarusian-Polish Border Lead to a Major War in Europe?

From Crisis to Coup

For the ruling Law and Justice Party (PiS), the human suffering on its freezing border could, in fact, be manipulated to turn a humanitarian crisis into a political coup.

Poland faces an election in 2023 and PiS is slipping behind in the polls. The leadership raced to power on anti-migrant rhetoric in the past and it now hopes the crisis will allow them to appeal to its voters via migration once again.

Back in 2015, PiS’ leader Jaroslaw Kaczynski warned his supporters that the increasing number of people seeking asylum in Europe would bring “parasites and protozoa”. He also said Poland did “not invite refugees and had the right to say no”. In this recent crisis, Kaczynski has called for a “new law” and said “we must strengthen the military”. The Sejm has also voted through the construction of a border wall.

Prime Minister Morawiecki spoke of “protecting holy Polish territory” – appealing to Islamophobic as well as anti-migrant sentiment – while Culture Minister Piotr Glinski has promised to “defend Poland against migrants”. No wonder outspoken critic of PiS and former EU Chief Donald Tusk has said the crisis is “political gold” for the authoritarian, far-right party.

Poland’s troops have matched the warlike rhetoric with aggressive action: using gas and stun grenades, water canons, and tear gas against people huddled on the border, some of whom will have already fled violence in their home countries.

The right-wing commentator Ryszard Majdzik appeared on Polskie Radio 24 to praise tactics such as illegal pushbacks, saying “the Polish soldier is at the border and has the right to use any means in order not to admit here the scoundrels, terrorists, and others, who want to cross Poland on their way further on to the European Union”. Far-right activist Piotr C. Lisiecki tweeted “we will spend 1.5 billion zlotys on the border wall, because no one has the courage to spend 1.5 zlotys on the border on a 7.62 cartridge. This is the measure of the fall of Europe”. His tweet appeared to endorse shooting people seeking asylum.

Professor Rafal Pankowski, from the anti-racist Never Again Association, told Byline Times how Poland is witnessing “a huge wave of hate speech and dehumanising rhetoric against the refugees in both traditional media and online social media, with crudely Islamophobic undertones and in line with far-right fantasies about a war of civilizations. I am afraid this recent wave of xenophobia further undermines the basic values of humanity which have been seriously undermined in Poland in the last years.”

Trapped between two fronts of armed guards are the women, men and children who are cold, afraid, hungry and desperate for human empathy and kindness. Many of the people pushed by Belarus to the border are survivors of the conflicts in Afghanistan and Iraq – conflicts heavily linked to British political decision-making and military forces.