With schools in England reopening with no real mitigation measures in place, concerns mount that educational settings could become the epicentre of a new surge in Coronavirus cases and instances of Long COVID in children

After an academic year marred by disruption and self-isolation due to the Coronavirus, the sight of children returning to school is welcome. But, with the UK recording 41,192 COVID-19 cases on Monday – an increase of 14,716 on the week before – it is clear that the virus isn’t going away.

Following the relaxation of all restrictions on 19 July in England, despite the emergence of the Delta variant, schools are now reopening without bubbles, contract-tracing, and face masks in place.

In Scotland, cases have soared as pupils have returned to school. Such is the concern that schools will lead to a spike in infection rates, a coalition of medical experts and campaigners have written an open letter to the Education Secretary expressing concern about the risks of another wave of the pandemic.

“The Government has a duty to protect children, our wider communities, and the NHS and healthcare workers from the impact of a fourth wave following school re-opening,” the letter’s authors wrote. “There has been no plan for robust mitigation measures in schools to reduce the risk for children from infection and the consequences thereof, including Long COVID, hospitalisations, staff safety and educational disruption.”

These are fears echoed by those working in schools.

“It’s almost as if COVID-19 has gone,” one primary schoolteacher in Durham told Byline Times. “The children are no longer in bubbles and year groups can mix. There never was mandatory mask-wearing for pupils and, if staff want to wear them, they can – but no-one is.

“Normally I’m excited about the new school year and the possibilities it will bring for our children, but there’s a cloud of fear hanging above all of our heads. Allowing the children in our care to become infected then infect each other with possible Long COVID is unforgivable”.

With case numbers in Devon rising, secondary schools have been advised by local Public Health England teams to revert to staff and students wearing face coverings in corridors and communal areas. Last week, the nearby Derriford Hospital declared a critical incident as the number of COVID-19 patients hit record levels.

“We’re not routinely sending large numbers of students home due to being potential contacts in school, but I think more staff and students will be absent due to rising cases and testing positive,” said the chief executive of a multi-academy trust in Devon. “The staff absence problem is massive – we do not have the funds to keep paying large supply teacher bills. Schools need more basic funding.”

Scientists across the world have criticised Education Secretary Gavin Williamson’s stance on COVID-19. Data suggests that, in the past two months, there has been more than 2,300 hospitalisations of under-18s, while one in seven children will experience long-term effects lasting for 12 to 15 weeks or more. According to the Office for National Statistics, an estimated 34,000 children are living with Long COVID in the UK. 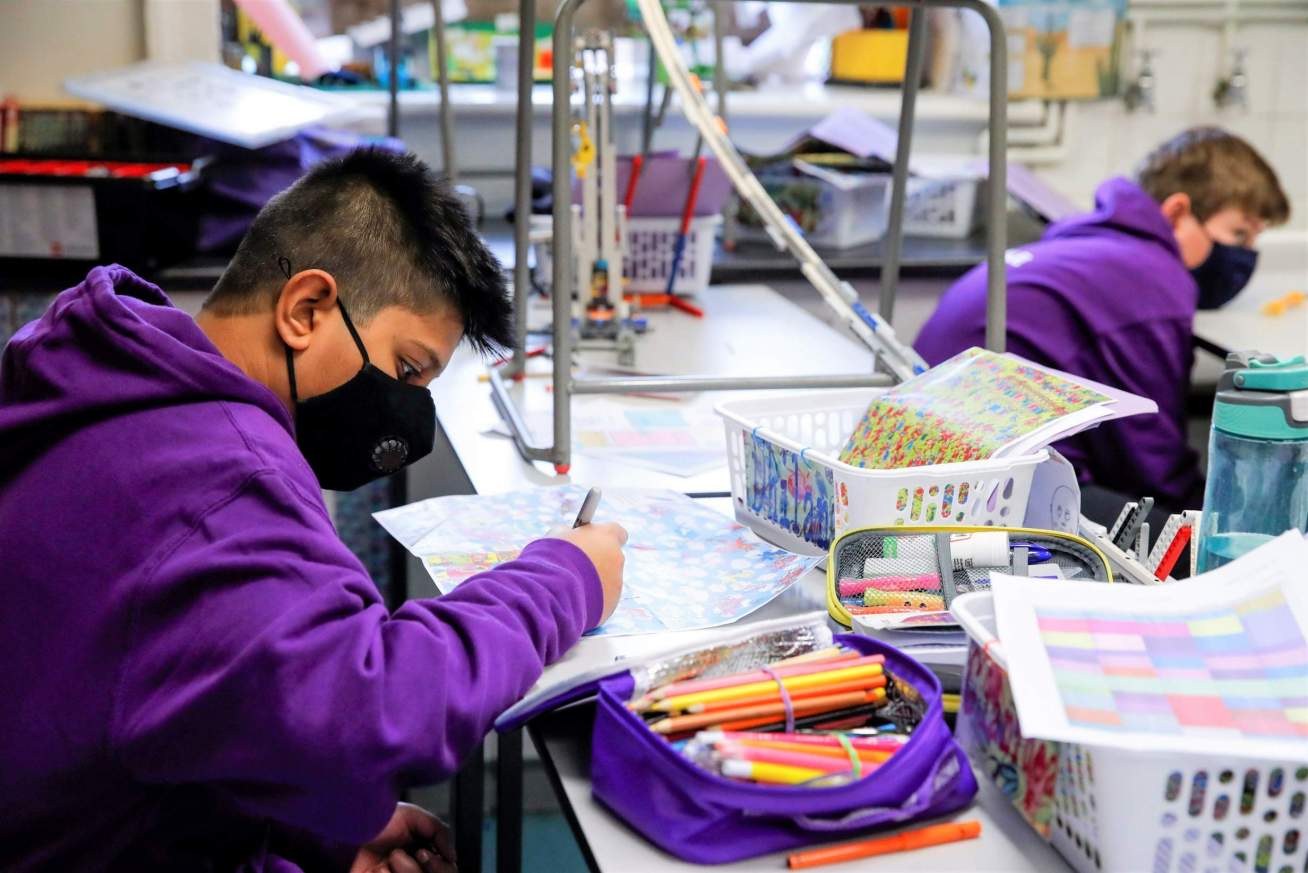 Back to School and Back toRising Coronavirus Cases?

Backed by £25 million of Government investment, carbon dioxide monitors will be provided to all state-funded education settings from September. While this is a welcome move, many in the education sector still believe that it is inadequate.

“They will alert us to poor ventilation – but they will not improve ventilation,” the chief executive in Devon told Byline Times. “They’re a fine example of the Government wanting to appear to the voting public to be doing something.”

Martin McKee, professor of European public health at the London School of Hygiene and Tropical Medicine, agrees. “Carbon dioxide monitors alone are like having fire alarms without fire extinguishers,” he said. “The Government seems to be simply hoping that there will be no problems despite doing very little to prevent them.

“We need to start vaccinating 12 to 15 year olds – other countries are doing this safely. Ministers do seem to want this, but the approach by the JCVI (the Joint Committee on Vaccination and Immunisation) is, once again, inexplicable.”

According to Dr Kit Yates, a senior lecturer in the department of mathematical sciences at the University of Bath, in some ways, the situation is better than it was last year as a large proportion of the population is now vaccinated. But children are actually “in a worse position”.

“Children are returning to school against a background of community infection levels 26 times higher than at the same time last year, and with the much more transmissible Delta variant accounting for almost all infections,” he said. “Carbon dioxide monitors are not yet in place. They don’t provide the solution – but just make people aware that there is a problem. It’s like providing a patient with a thermometer and expecting that the act of checking their temperature will cure the patient of their illness.”

This is echoed by Trish Greenhalgh, professor of primary care at the University of Oxford. “The incidence of COVID-19 is much higher now than it is a year ago, and most cases are the highly contagious and more serious Delta variant,” she said. “Since children aren’t vaccinated, they themselves are therefore at far greater risk than they were a year ago.”

With Gavin Williamson emphasising parental responsibility – in stark contrast to the previous emphasis on schools taking precautionary measures – parents are also worried about how the Coronavirus will impact this coming school term and the seemingly relaxed nature of the guidance.

Government guidance currently suggests that, if an individual lives with somebody who has symptoms or has tested positive for COVID-19, they do not need to self-isolate if they are under 18 years and six months old.

“If parents disagree with what a school is doing, I think they will nearly always blame headteachers before the Government,” said the chief executive in Devon.

For Lili Stevens, an immunosuppressed clinically vulnerable parent with a teenage son, “parental responsibility is simply the Government abdicating responsibility”. With “parents unaware of the main symptoms of Delta and how it presents in children”, coupled with the “message conveyed that children rarely get sick”, she is “concerned that there will be a blasé attitude to attendance”, especially if parents cannot take time off work to look after a sick child.

“I am not sure if I will be alive in the Spring,” she told Byline Times. Her child has only been able to receive one dose of the vaccine ahead of the school term beginning and she remains worried by the extent to which the vaccine will reduce transmission between them.

“The lack of meaningful mitigation seems incredibly reckless and short-sighted,” said another parent from Cheshire. “By the second day, children in two separate year groups had already been sent to school even though their parents are ill with COVID-19.”

Within days of returning to school, a pupil in their child’s year had tested positive and assemblies comprising 180 students without masks are now the norm.

As the debate intensifies on whether and when 12 to 15 year olds should be vaccinated, it appears that it is, once again, too little too late.

“For many measures (masks, bubbles, testing), it’s not a matter of lacking the technology (we had many of them in place already),” said Dr Yates. “For others, like ventilation, it appears there is a lack of political motivation or will to invest in the solutions which will provide long-term health benefits.”

While other countries have implemented safety measures – in France, for instance, masks are mandatory indoors starting from the age of six – England seems determined to take an opposite path. Yesterday, Williamson said that secondary pupils may no longer have to take COVID-19 tests at home, telling MPs: “We’ll be reviewing the need for children to do home testing at the end of September. If there isn’t a need for that, we’ll be looking at removing that.” The impact of this remains to be seen.

Geoff Barton, general secretary of the Association of School and College Leaders, told Byline Times that while schools and colleges are pleased to be welcoming pupils back, there is a “very real risk of more disruption as a result of the Coronavirus and the Government must be ready to provide more support”.

“We welcome the recent announcement of carbon dioxide monitors but there also needs to be investment in ventilation systems where this is necessary,” he said. “[The Government] should make funding available for high-quality ventilation systems rather than simply advising that windows should be opened which is not a sustainable solution in the middle of a British winter.”