Tiger Bay was a unique multicultural area in the Cardiff Docks that goes back nearly 200 years.

“In Butetown there existed a total racial harmony,” recalls 56 year-old Richard Cordle who was born and bred in the area. “It was pure heaven. You had every race under the sun here, everyone knew each other, including every last shop owner and landlord. Everybody helped each other out if they were in trouble. It was like one big extended family made up of people who were proud of their community. I am and always will be proud to be a docks boy.”

However, the image conjured by Cordle – of harmonious diversity – has been lost in the name of progress, thanks to a ruthless campaign of local ‘regeneration’.

A Harmony of Ethnicity and Culture

By 1870, Cardiff was a major iron and coal-exporting port and, by the 20th Century, one of the world’s biggest docks.

Sailors brought their cargo, mores, music and culture. They caroused, drank and brawled in the area’s bars such as ‘The Bucket of Blood’, ‘The Snakepit’ and ‘The Packet Hotel’ or spent their wages in the gambling dens and brothels of the free-thinking, egalitarian Bute Street.

In Tiger Bay, Basque, Italian there were African and Somali cafes alongside clubs and all night shebeens playing solely black dance music. In 1911, the area was described as “one of the most colourful and cosmopolitan communities on Earth”.

“Caribbean and soul music was everywhere,” says Cordle, whose father was Barbadian and mother, Welsh-Maltese. “We even had our own Notting Hill-type carnival that started as a mardi gras in the late 1950s. There were at least 57 languages spoken in our small area. I went to school with kids whose parents or grandparents came from all over the world including Yemen, Latin America, Morocco, Estonia, Spain and beyond and I have cousins of Italian, Maltese, Polish and Bangladeshi extraction.”

It was a poor area, but there was a great sense of community and harmony. The first mosque in Wales was established by Somali sailors in the 1890s and was built close to the old French Huguenot and Greek Orthodox Churches. Nearby, the first curry restaurant in the UK was opened by a man named Mr Ali.

But the city establishment was not so happy.

Young Cardiff girls,” he proclaimed, “should not be allowed to admire such beasts”.

This prejudice turned to violence on 11 June 1919, when white veterans from World War One, derived from all over Cardiff and South Wales, attacked the residents of Tiger Bay.

“They wanted to lynch and burn everyone from the docks, no matter the colour,” explains Cordle. “So everyone from Tiger Bay barricaded Bute Road and told the police that they would defend themselves. Many were ex-servicemen, mainly Somali, Yemeni, Afro-Caribbean and had guns. They held them off for three days and nights.”

The conflict involved more than 2,000 people. An Arab lodging house was burned down, a Somali priest attacked by the mob who also stripped a white woman married to an African man and knocked out her teeth. One newspaper described it as a night of ‘guerrilla warfare’ while the South Wales News headline read: ‘Blacks Hunted by a Furious Mob’.

Although eye witness reports said six died, the official reports state that only three men were killed: one black resident and two white men. Unsurprisingly, virtually all arrests were from the local ethnic minority population and not from the white attackers.

Tiger Bay continued to be a constant source of anguish for Cardiff’s council and well-to-do residents. They believed the worst about a community that, although not perfect, was a great model for community spirit and multiculturalism.

“That stigma obscures the fact that the majority of the men who lived there were hard-working members of the community, not pimps running whores,” says long-time resident author and historian, the late Neil Sinclair. “The reality is far from that, as everyone looked out for one another and nobody ever locked their door… It was stigmatised. Another example of good old-fashioned racism.”

During World War Two, Cardiff suffered its own Blitz, directed at the docks, and Tiger Bay took a battering.

At the invitation of the Government, more immigrants arrived after the war, filling an employment shortfall. Arriving on ships such as the Empire Windrush, they hung out at the Caribbean Cafe on Bute Road. And, just like Notting Hill, Soho, Brixton and the east end of London, the area exploded with vitality.

“There were parties all the time, house parties and shebeens, and illegal drinking joints,” laughs Cordle. “Lots of black GIs came here and had never seen black and white people mixing like this. The authorities tried to ban them from the pubs but the landlords and locals refused, as that’s not our way. Tiger Bay was the hottest spot in Wales, perhaps similar to London’s Soho, and was not without a certain notoriety and raised many a Welsh Presbyterian eyebrow.”

“This was a major industrial port and thousands of workers descended upon it daily,” adds Sinclair. “Come four o’clock when the whistle blew they didn’t go home and slap the money on the table for their mams, they headed for the pubs and the place was jumping.”

Tiger Bay had such a raucous reputation that the Cardiff authorities did their best to destroy it in two acts of social cleansing.

First, they let the area rot, and its buildings become uninhabitable, as a justification for evictions and bulldozing.

So, beginning in the early 1960s, the council razed Tiger Bay to the ground. It destroyed 45 streets of 19th Century town houses and cottages, filled in the historic Glamorganshire canal with cement and deployed unprecedented cultural vandalism.

In its place, lifeless, concrete council houses were erected. Between 1960 and 1966, two 16-storey tower blocks were constructed – Loudoun House and Nelson House – at the very centre of Tiger Bay’s Loudoun Square and once happy residents were moved into the new, soulless buildings.

Today, just three of the original streets remain while historic buildings have recently been completely demolished.

Yet, the most damage was done by the Cardiff Bay Development Corporation, established in 2001, which used cynical homogenisation and corporatisation to wreck a once historic area.

The £2 billion spent by the development corporation could easily have been used to rejuvenate the dilapidated housing and dockside. It could have retained the area’s character, maintained the community and created a unique historic and cultural attraction. Dwellings of a similar age were rejuvenated and modernised for a fraction of this cost in other Cardiff areas, such as Splott. But, then again, none had suffered the institutional prejudice that Tiger Bay suffered.

“The regeneration has destroyed something unique and ecologically valuable and replaced it with something boring, generic and depressing,” regrets Cardiff-born urban designer and planning consultancy boss Adrian Jones. “There’s very little of Cardiff in Cardiff Bay.”

Many of the district’s great historic pubs, featuring proud Victorian interiors, have disappeared and have instead been replaced by Nando’s, Subway and Wagamama restaurants, alongside tasteless luxury homes that locals cannot afford.

In 2012, Jones said that this was a contender for the “worst example of waterside regeneration in Britain”, claiming the authorities had turned their back on the existing Butetown community and that public money had been wasted on “vanity projects”.

The result is that the original Butetown area of Tiger Bay has been squeezed into a smaller space – isolated and neglected.

In 2019, Butetown had the highest rate of child poverty in Cardiff, at 46%. Still a melting pot of races, cultures and religions, it is also home to simmering fury.

One resident, 23-year-old Elbashir Idris, who was born in Sudan but has lived in Butetown most his life, talks about the wall that runs the entire length of Bute Street.

“We call it the Berlin Wall,” he says. “On the other side of that wall is Atlantic Wharf. It is a much more gentrified area of the ward of Butetown and, over there, is the seat of power at Cardiff Bay. We feel segregated and marginalised by this wall from the rest of Cardiff.

“I feel this Berlin Wall of ours is a device that, for decades, has made the people of Butetown feel like a separate community. I am Sudanese but the Caribbean and Yemenis and Somalis are my brothers. This is our fortress nobody can touch.”

However, no one from Butetown works in the new, chain coffee shops that litter the docks.

“Looking back to before the Cardiff Bay development, many people worked in the area but not now,” says Butetown councillor Saeed Ebrahim. .”

The destruction of first Tiger Bay community and then Butetown is perhaps the most heinous example of social, ethnic and cultural cleansing in modern Wales. The area’s racially mixed residents and their libertarian views on race, marriage, sex and hedonism, had irked the authorities for 100 years.

First, they turned their back on the area – leaving it to crumble. Then, the diggers rolled in – encouraged by local politicians at the behest of wealthy businesspeople – and destroyed an area that was an example to all of us.

“Tiger Bay was. in the simplest words possible a symbol of racial, ethnic, religious and ecumenical harmony”, concludes Sinclair. “My mother used to say that the League of Nations could learn a thing or two from Tiger Bay.”

Chris Sullivan, 9 September 2020
Chris Sullivan looks at the consequences for Notting Hill of the determination of successive Conservative Governments to deregulate rents and planning 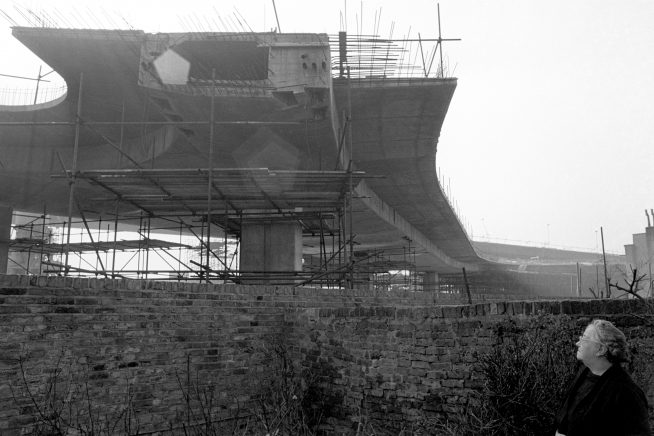 Disappearing Cities: The Rift Between Notting Hill and Notting Dale

Chris Sullivan, 15 June 2020
Three years after the Grenfell Tower tragedy, Chris Sullivan excavates the hidden history of one of London's most polarised neighbourhoods 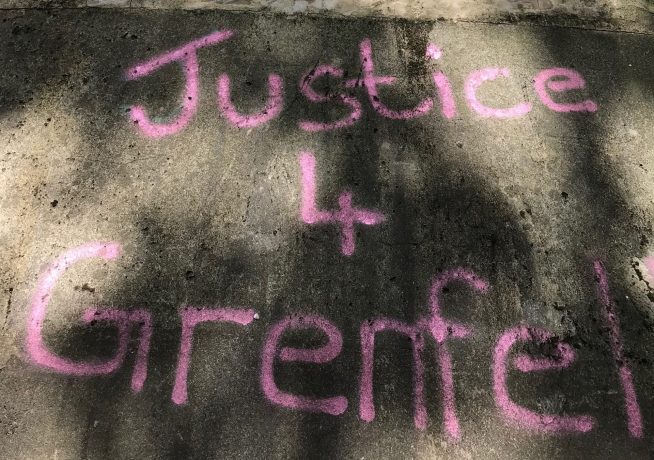