Responses from UK and Polish Governments to Europe’s refugee crisis differ in their impact and yet come from the same old book of divide and conquer, say POMOC’s Krzysia Balinska and Grupa Granica’s Monika Matus

Since Vladimir Putin’s invasion of Ukraine, more than two million refugees have fled to Poland, with people in the country participating in the largest grassroot community care mobilisation since the 1997 Central European flood.

Heartwarming scenes have beamed around the world of ordinary citizens welcoming refugees in their homes, taking turns in coordinating transport, food and donations at crossing points, train stations, and impromptu refugee centres. This is actionable solidarity on an unprecedented scale and spontaneity in Poland.

That solidarity is not surprising when the historical relationship between the two nations is considered. There is both a centuries-long history of Polish imperialism in Ukraine, and even longer one of standing arm in arm against Moscow. The reality of being attacked by Putin is understood by the people across eastern Europe on a visceral level. Empathy breeds offers of helping hands.

National authorities in Poland, however, have been largely absent in coordinating help. Logistical support and safeguarding procedures are not yet in place. With such overwhelming numbers many cases of potential human trafficking and child abuse have been already reported. A draft bill allocating £1.43 billion for emergency aid was passed in Sejm on 12 March, but so far none of the funds have been allocated to local authorities to provide consistent on the ground aid.

The Polish Government has excused this inaction by implying that the funds need to be released by the European Commission before the national government can act.

Perhaps this is why 74% of Poles support the idea of a European Union relocation scheme.

What a change from 2015, when Poland opposed a similar scheme during the so-called European refugee crisis and refused to accept 7,000 people arriving through the Mediterranean in Greece and Italy. That year, the Law and Justice Party rode a wave of anti-refugee rhetoric to parliamentary victory.

Migrants rights NGOs like Fundacja Ocalenie warned that Poland, a country on the outer edge of the EU, might one day need a functional EU relocation scheme, which can only work if all member states participate in it.

One Border, Two Sets of Rules

In summer 2021, the Belarusian regime engaged in people smuggling on an unprecedented scale – sending thousands of people, mostly from the Middle East, to the border with Poland. The move was designed to cause further polarisation and stir anti-migrant sentiment. Unfortunately it succeeded, with 19 reported deaths on the Polish/Belarusian border.

Polish authorities described the migrants as a threat, called a state of emergency, and responded with illegal push-backs and heavy militarisation of the border area. The state of emergency effectively banned press, medical and legal humanitarian workers from entering the area. It allowed border violence to persist unreported, unchallenged and missing from the international headlines.

This militarised approach was supported by the British troops, effectively harassing activists and local communities, with UK Defence Secretary Ben Wallace calling this move an act of solidarity between Poland and Britain.

Six days after Russia’s attack on Ukraine, Polish Minister of Internal Affairs Michal Kaminski ruled to extend the so-called state of emergency on the border. Grupa Granica – a coalition of migrant rights NGOs and independent activists that formed in response to the state violence in the summer of 2021 – reported yet again a record number of illegal push backs in recent days.

In the beginning of March, a group from Yemen contacted Grupa Granica after spending a week in the Bialowieza forest with no food or water. They reported being too scared to send their location because they had been pushed back before and severely beat up by a Belarusian border guard. The Polish guards arrived before the activists, and pushed the group back into Kuznica, Belarus, in fewer than 20 minutes.

The crisis is far from settled. In the first week of March alone, 78 people, nine of whom were children, contacted Grupa Granica for help. In the second week of March the number rose to almost 130 people. Activists and local residents bringing food and medical supplies have faced intimidation and regular police raids since the beginning of the crisis. During one of the night interventions, a police officer told the activists that if they want to help refugees, they should travel south where “they can help the Ukrainians”.

This institutional racism and segregation of refugees costs lives. It works as a strategy of pitting different migrant groups against each other. Polish border guards use different language in their official channels of communication – in the north there are “foreigners” and “attackers”, while the guards “prevent the illegal border crossing”. In the south there are “refugees” and guards “help with the processing of the border checks”.

It is convenient for Europe to make eastern European countries the frontline of defence against refugees the rest of the group does not want to accept. High-tech surveillance tools and heavily militarised walls have been placed on the borders of Greece, Hungary, and now, Poland. Expanding and maintaining Fortress Europe is costly, and where there is cost, there is profit to be made. In 2018, the EU estimated that the value of its security market will grow to €128 billion (£108 billion) by 2020. 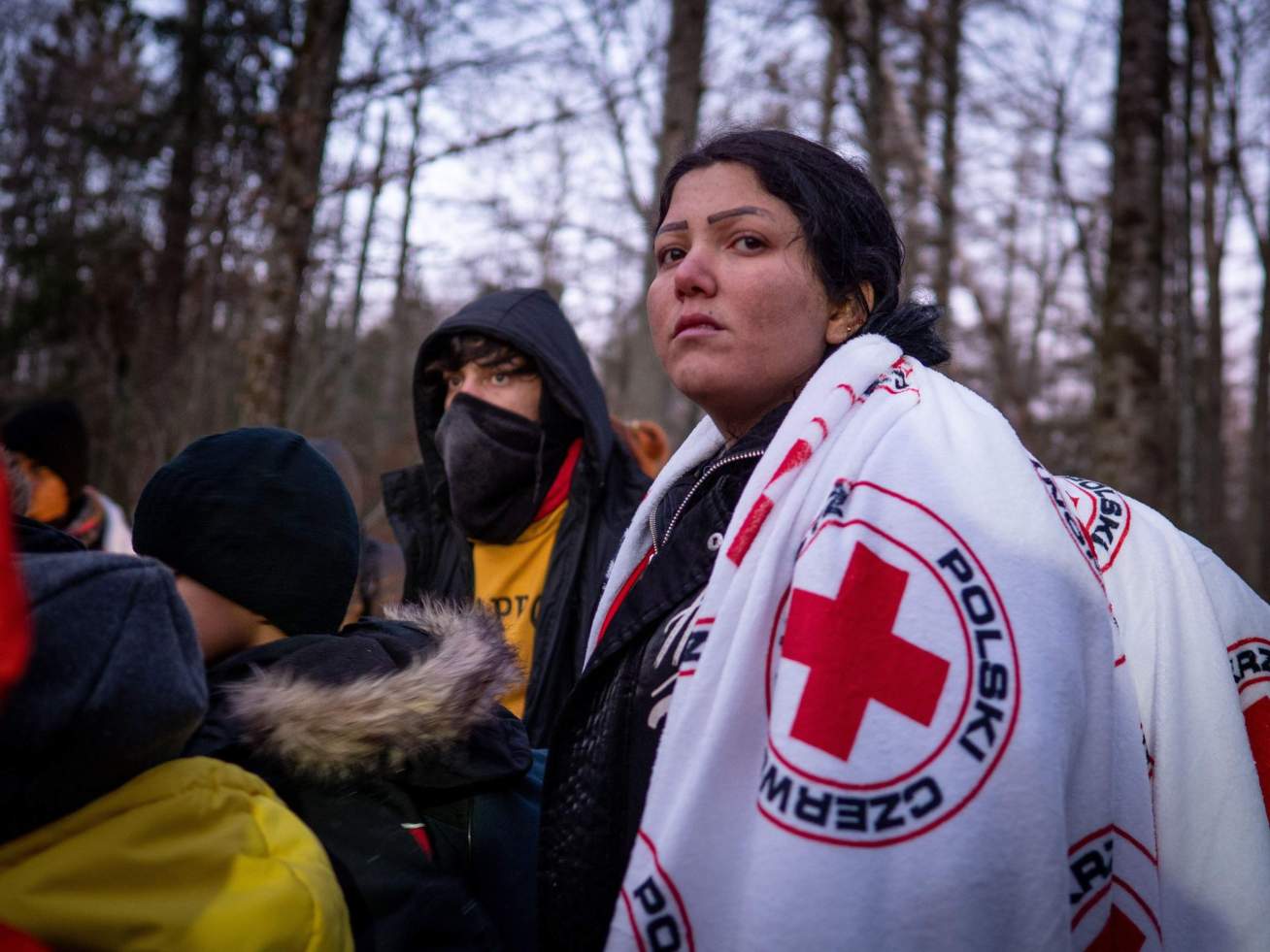 This year marks the 10th anniversary of Theresa May introducing the term ‘hostile environment‘ into a public debate, and the 20th anniversary of David Blunkett’s Nationality, Immigration and Asylum Act which forced people into destitution on the basis of late applications. Three people were admitted to hospital with hypothermia on the first day of the bill’s operations.

Ever since, the anti-immigration agenda has been exploited for political gain at the expense of vulnerable people.

The Windrush scandal, the indefinite detention of innocent people, people drowning in the English waters, Home Office surveillance, the Leave campaign, the substandard conditions in the asylum accommodation, the astronomic NHS bills to people stuck in the asylum system for years without the right to work… the list goes on.

One thing remains certain: hostility does not resolve the cause of migration and it certainly does not stop it. What it does is it destroys communities and takes lives.

This week, the Nationality and Borders Bill returns to the House of Commons. The bill has been criticised by the UNHCR UN Refugee Agency because it undermines “the 1951 Refugee Convention, the agreement which has protected refugees for decades and of which the UK is a signatory”.

A total of 19 amendments were brought in by the Lords including defeating a clause to criminalise those who have no choice but come to the UK through unsafe, irregular routes. However, each amendment may return to the bill in the Commons’ votes.

Post-Brexit Britain’s response to the war in Ukraine differs from the one of the rest of the continent, though it seems to take inspiration from the inaction of Polish authorities and placing huge amounts of responsibility upon the civic society and the third sector.

“Homes for Ukraine” is a convoluted visa-based programme – ignoring how everyone fleeing Ukraine has a right to claim asylum in the UK on the basis of Geneva Convention. The scheme has potential to create two classes of refugees: those housed in the communities with the right to work and an extended family scheme, and those criminalised for seeking protection.

One thing that is unique about the war in Ukraine is how it sparked the public outcry for better immigration policies across countries. If there ever was a moment to radically reimagine the procedures we subject the ones who knock on our doors seeking sanctuary to, it is now.