With Russian troops massing on the Ukrainian border, and with Britain largely unable to influence the course of history through diplomacy, attention has rightfully turned to the home front, and how exactly we have aided Vladimir Putin’s regime through domestic policy in recent years.

The Government is keen to show that it is taking action – and has now scrapped the ‘tier 1’ investor visa scheme that has acted as a butler for money laundering over the last decade – welcoming rich individuals, often from corrupt states, with minimal due diligence checks.

Indeed, Britain’s marriage with illicit finance is now long-standing and entrenched – especially in the capital, London, described in the 2020 report by Parliament’s Security and Intelligence Committee as “Londongrad” – a place in which “PR firms, charities, political interests, academia and cultural institutions were all willing beneficiaries of Russian money”.

Wealthy Russians have profited from this oligarch’s paradise, and Russia is currently in the spotlight given its provocations in Ukraine, but this system is certainly not exclusively enjoyed by Russians. The UK, and London, is a dumping ground for dodgy money amassed across the globe, often hidden in the luxury property market.

As Transparency International has calculated, at least £5 billion worth of property in the UK has been bought with suspicious wealth. One-fifth of this originates from Russia, and 84% has been purchased in London.

This has occurred through the process of ‘capital flight’ – domestic instability in Russia causing wealthy individuals to move their money overseas. Buying property in London is attractive because it cleans dirty money, is a stable asset, and provides a safe house (literally) if the individual needs to leave Russia.

It has been estimated that Russians hold some £1 trillion in wealth abroad, with capital flight increasing to record levels in 2015 – a year after Russia invaded eastern Ukraine and annexed Crimea – with £131 billion leaving the country. 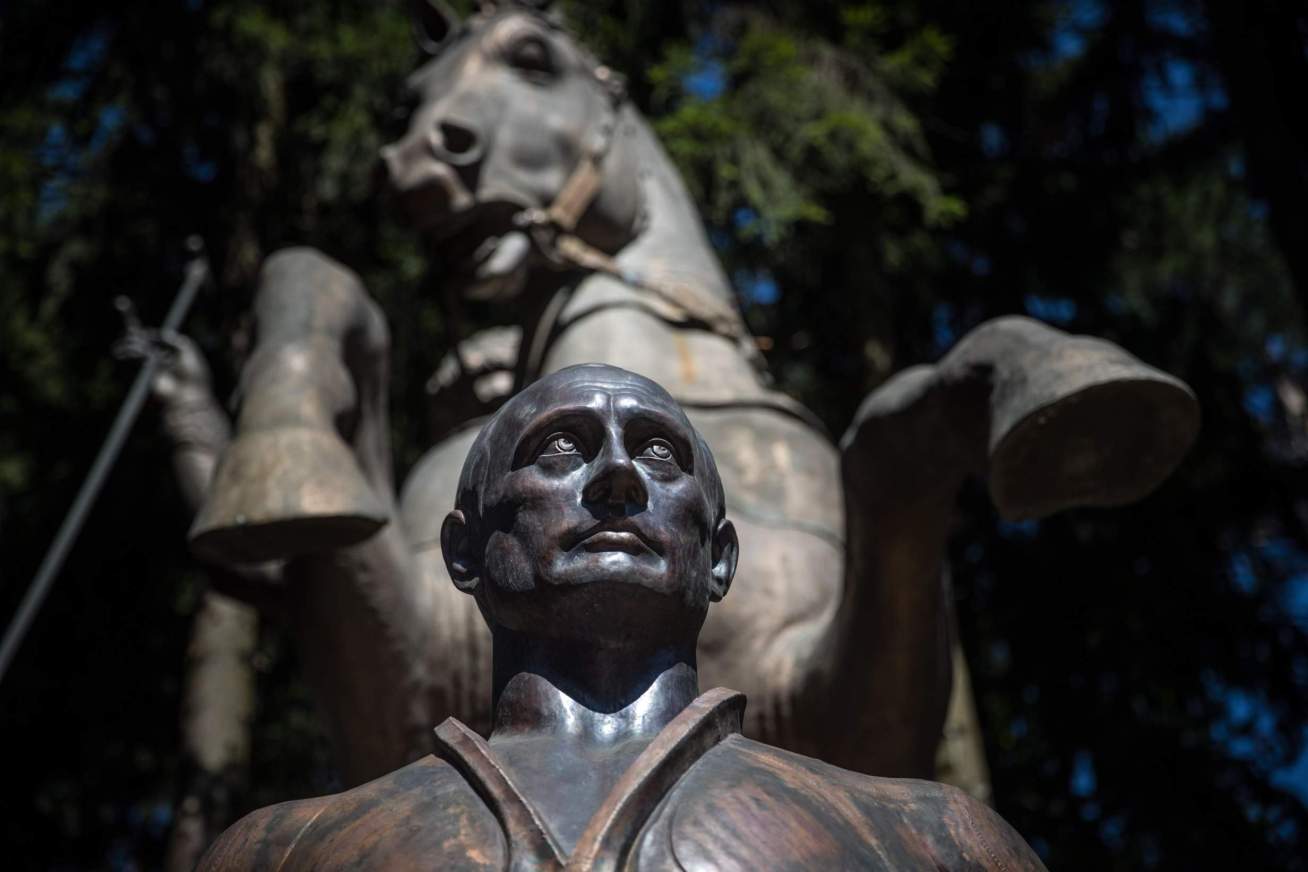 Opaque companies, often nestled in tax havens, provide an ideal way to procure properties in the UK – beyond the prying eyes of journalists or criminal authorities. Since 2008, £100 billion of London property has been bought by overseas companies based in so-called ‘secrecy jurisdictions’ – the “favoured vehicle for money launderers”, according to Transparency International.

Once again, this state of affairs has been facilitated by the UK Government – if only due to its consistent lack of action. In 2016, then Prime Minister David Cameron announced that the Government would introduce a public beneficial ownership register of overseas companies that own UK land titles – in effect pulling back the curtain to reveal the individuals owning high-value properties.

This measure still hasn’t been introduced, and former Government minister Lord Edward Faulks even claims that he was “leant on” in 2017/18 to drop parliamentary amendments that would have forced the introduction of this public register. This is despite the fact that some 2,189 UK registered companies are involved in Russian laundering and corruption cases, involving funds worth £82 billion.

“I can only think a deluded desire to protect the City of London has led to all these delays”, Faulks told the Guardian.

It’s also unclear how this register would address the buying and selling of ‘off-plan’ homes – procuring a property before it is built – which is an increasingly popular option among property speculators. Indeed, it is not compulsory for transactions in the pre-completion stage to be recorded on the Land Registry, reducing transparency in an already opaque system.

Moreover, the reforms introduced by the Government so far have largely proven to be ineffective. The ‘golden’ visa scheme was tightened in 2015 and 2019 – leading to a marked drop in the number of people entering the UK from high-corruption-risk countries – but now looks set to be shut down entirely due to persistent money laundering concerns.

The Criminal Finances Act 2017 also introduced Unexplained Wealth Orders (UWOs) – allowing law enforcement to apply for a court order requiring someone to explain their interest in a property and how they obtained it. If that person failed to comply, a court could subsequently decide that the property should be confiscated. Available from January 2018, the use of UWOs has been limited so far, however, having only been obtained in four cases as of June 2021.

As a result, “even the most conservative estimates indicate illicit financial flows to the UK are a massive problem”, says Transparency International.

This is because, as the Russia Report illuminated, there are whole corporate institutions now committed to easing the flow of roubles into London – or at least resolved to look the other way. Available data shows that Suspicious Activity Reports by professionals working in the property sector – estate agents and lawyers – are relatively low, as are Government fines for firms that fail to report money laundering issues. The commercial incentives currently far outweigh the criminal risk.

This has created a climate in which the spoils of organised crime are laundered through London – with as much as 50% of money laundered through Russian schemes, or ‘laundromats’, passing through UK corporate structures.

The scale of London’s illicit economy has also warped its legitimate interests. London’s status as a hub for the international oligarchy has skewed the property market, and estimates suggest that anywhere between 20% and 60% of ‘prime’ London real estate is purchased by overseas buyers – presumably drawn to a place that caters to the interests of the rich, powerful and private.

‘Prime’ properties are the most expensive in the capital and generate the highest profits for developers and estate agents. International wealth has therefore firmly orientated the market towards luxury developments, consisting of properties that are either bought and left empty – a weekend retreat for global jet-setters – or rented out at inflated prices.

Academic Anna Minton has estimated, for example, that 25% of residential properties in Knightsbridge and Belgravia are empty most of the time, rising to 40% in the West End. In fact, almost 25,000 London homes were left unoccupied in 2020 – the highest figure since 2012 – at an estimated total worth of £11 billion, even though some 11,000 people sleep rough on the streets of the capital every year. London properties are the most unaffordable in the country, captured by the super-rich.

An investigation by Transparency International found that, in 14 landmark London developments, almost 40% of the 2,000 future homes were bought by those from high corruption risk jurisdictions, and 80% were bought by overseas investors.

Indeed, to a large extent, Britain no longer owns the landmarks so closely associated with its capital. Battersea Power Station is now one of London’s largest new property developments – converted into more than 4,000 flats, with most of the luxury homes sold ‘off-plan’ long before they were completed. The power station was sold to the Malaysian sovereign wealth fund and the Employees Provident Fund of Malaysia for £1.6 billion in 2019 – a form of foreign corporate ownership that reflects many neighbouring developments in the Nine Elms area of south-west London.

Yet this trend is also replicated across the capital. The Shard, the tallest freestanding structure in the city and the second tallest in the country, is owned by the state of Qatar. The Gherkin is owned by a Brazilian conglomerate and the ‘Walkie Talkie’ is owned by a Hong Kong company best known for its Chinese-style food sauces. City Hall and the promenade surrounding it is entirely owned by Kuwait.

In a country already ravaged by class divisions, the Government and the establishment have opened the floodgates to a new breed of international oligarchs – people who have systematically harvested London’s architectural assets and turned the city into an organised crime haven.

The battle with Russia may be fought thousands of miles away, but it has already been undermined by the practices that we have allowed to take place on our own doorstep for years.

Sam Bright’s book, ‘Fortress London: Why we need to save the country from its capital’, will be published in April 2022