Cummings’ Brexit ConfessionsReveal the Hollow Heart of a Hallowed Project

The most interesting thing about Dominic Cummings’ transformation into a Twitter pundit is not that the wizard has pulled the curtain back on himself, but that he continues to believe himself to be a wizard even after he has done so.

In recent weeks, few discussion topics have escaped the superforecaster’s lens: climate change, science innovation, fellow pundits. And yet, Cummings most readily and easily gives himself away when it comes to the subject which propelled him into the corridors of power: Brexit.

The Prime Minister’s former chief advisor, and mastermind of the Vote Leave campaign, has been discussing Brexit rather a lot. He has insisted that the process would have turned out better if the UK had not triggered Article 50. He has defended the lies written on the side of a red bus that Brexit would result in £350 million a week being sent to the NHS instead of the EU, as well as the imminent arrival of Turkish people in Britain via the country’s future membership of the EU.

But, most strikingly of all, he has admitted that the Leave campaign gave no thought at all to Ireland. It “would have been a bit messy but so what,” he tweeted. “It’s a small problem relative to others.”

If Brexit was truly settled, the indignation accompanying each of Cummings’ revelations would bear less significance. But Brexit is not settled. Its problems have not yet fully hit. Its historic offences have not been resolved. And, as a country, we have still not told the truth about it. 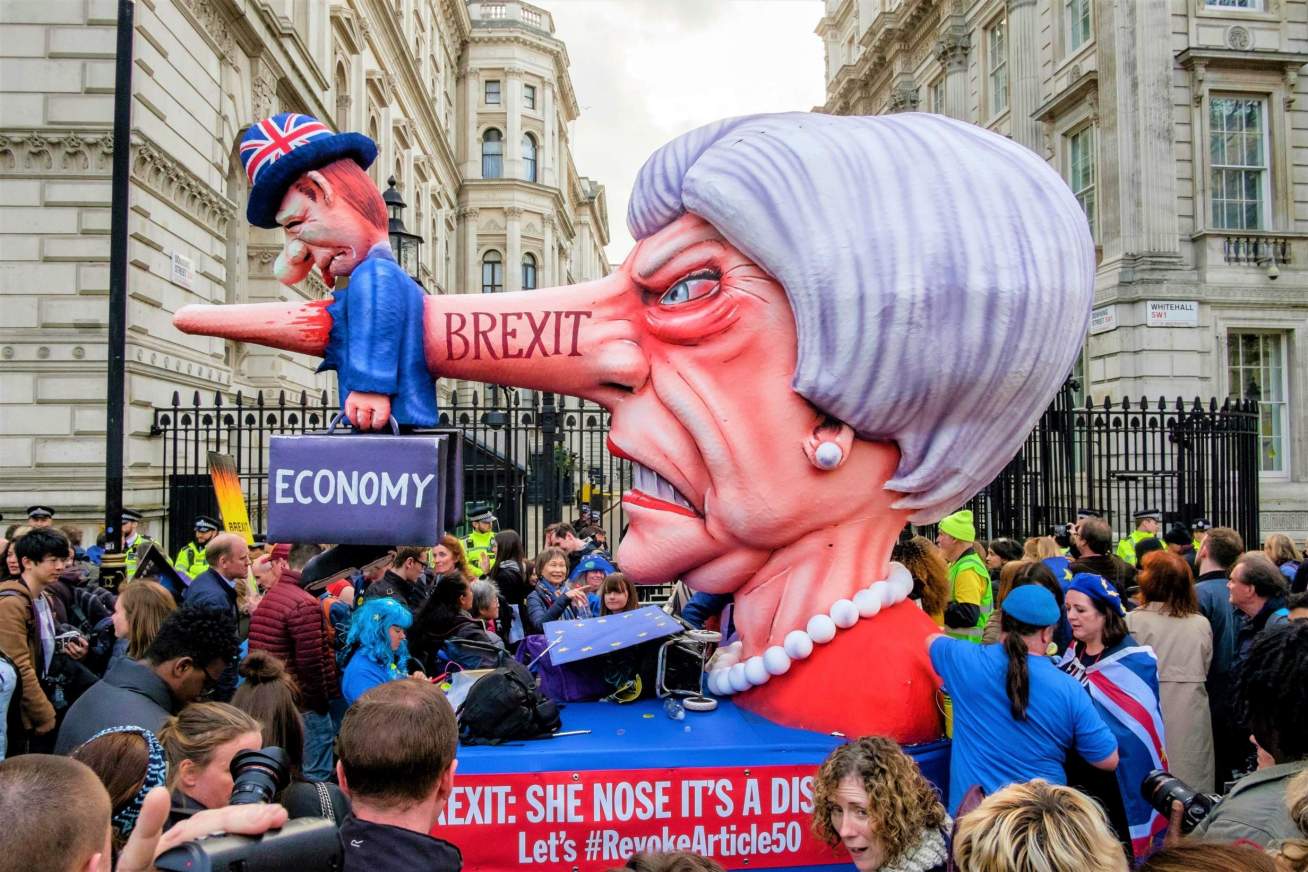 Telling the Truth About Brexit

Brexit is not an abstract problem. The UK and EU are continuing their tussle over Northern Ireland; stories abound of EU citizens becoming undocumented migrants after the end of the settled status scheme; and arguments rage about labour and supply chains, as supermarkets face shortages and fruit rots in British fields. This week, the Government slipped through the news that it would seek to make permanent its emergency powers for lorry queues.

There is an overarching problem here. We cannot address the challenges of the present, until we accept the lies and injustice that seeded them.

Take the settled status scheme. This was not simply a case of requiring EU citizens to apply to come and live in the UK like other third-country nationals – it was demanding that people apply to stay in their own homes. Repeatedly during the 2016 Referendum campaign, Brexiters assured voters and EU citizens that their status would not change. In October 2017, Boris Johnson, then Foreign Secretary, told EU citizens that “your rights will be protected whatever happens”. It was not true. The Government has, now, knowingly instigated a new Windrush scandal.

Northern Ireland, too, bears the stain of the Brexiters’ uninterest. Remainers warned about the consequences of Brexit for the island of Ireland. Right up to the moment the UK finally left the EU, those consequences were flatly denied. As Foreign Secretary, Johnson compared the border between the Republic and Northern Ireland – which claimed more than 3,000 lives – to the boundary between two London boroughs. As Prime Minister, he has lied that there would be no barriers to trade between Great Britain and Northern Ireland even after he negotiated the agreement which mandated them. On the premise of an ‘oven-ready deal’, he used that lie to win the 2019 General Election.

The indifference shown to the people of Northern Ireland, and a recent bloody civil war, embodied the Brexiters’ neo-imperial hubris – but it was not the only manifestation. Vote Leave’s campaign was anchored in racism; not simply around migration from eastern Europe, but deep-seated Islamophobia. This was one of the most important aspects of the referendum.

Although the narrative was almost entirely excised from the national discourse after June 2016, barely mentioned even by Remainers, Turkey’s apparent impending membership of the EU was the defining prong of the Vote Leave campaign after migration and ‘Take Back Control’. Posters around the country displayed footsteps leading to an open door emblazoned with a British passport with the caption ‘Turkey (population 76 million) is joining the EU’. Another advert highlighted Syria and Iraq on a map next to Turkey. The inference was clear: a vote for Remain meant that tens of millions of Muslim people would soon be descending upon Dover and claiming British citizenship. The then minister Penny Mordaunt even went on television to claim that Britain had no veto over Turkish membership – then doubled-down on the lie.

Even now, Cummings claims that Turkey was in fact joining the EU and that then Prime Minister David Cameron was pushing for it. It is a complete misrepresentation.

In the years before the referendum, I worked in the European Parliament, followed the Turkish membership issue, and attended numerous debates on the subject in the Foreign Affairs Committee. Accession talks had proceeded at a glacial pace for more than a decade and showed no signs of progress. The universal consensus across Brussels and the EU capitals was that Turkish membership was not coming for decades, if ever.

Turkey is joining the EU in the same way that NASA is sending astronauts to Mars: it is a valid and important aspiration in principle, but it is not happening for a long time and multiple conditions must first be met. Vote Leave knew this. Armed with the consolidated weapon of cynicism and prejudice, the group lied and lied in a naked attempt to terrify Middle England – and it worked.

Some Brexiters contend that, contrary to Remainers’ warnings, the ‘sky hasn’t fallen in’ since the Brexit vote – never mind that the problems are slow, insidious, and only just beginning. But ‘the sky won’t fall in’ wasn’t plastered on the side of a bus and did not form any metric of success. Brexit was marketed as a national rejuvenation, not something to be survived. This matters. We cannot simply accept the project as something endorsed by the British people without interrogating, historically, what they actually voted for.

That means measuring the reality against the promises made by the winning side. Brexiters assured us that business and trade would improve, while both have suffered. Companies have gone to the wall. Consumers face new charges. There was no £350 million a week for the NHS. The German manufacturers did not ride to the rescue. The slogans, meanwhile, land today like a sick joke: we did not hold all the cards; the EU did not need us more than we needed them; the exact same benefits were not on offer.

Paradox of VictimhoodNo Brexit Will Ever Satisfy the Ultras

The Demand for Honesty

On the fifth anniversary of the EU Referendum, I shared a panel on LBC with Kate Hoey, the Brexit-supporting former Labour MP. When we argued about the Brexiters’ lies, Hoey said something genuinely extraordinary:

“The public aren’t stupid. They knew that there were lots of things, probably, that the Leave campaign said, that maybe were not, actually, exactly going to work out or be right… The public understood very clearly… They knew that it wasn’t going to be all roses and wonderful things.”

The remark was striking in two ways. First, at no point did the Vote Leave campaign concede that there would be anything other than “roses and wonderful things”. Every single time a Remainer protested about potential problems before the referendum (and indeed for many years after it), Leavers retorted that they were lying or fearmongering. Hoey has no grounds to conclude that Brexit voters did not expect sunlit uplands, because that is all they were ever promised.

But the second point is even more telling. Hoey is not simply admitting that the Vote Leave campaign mis-sold its prospectus. She is not just suggesting that voters expect politicians to lie. She is quite openly proposing that political campaigns do not need to tell the truth.

This, really, is the story of the past five years. It is not just about Brexit, but the legitimised contamination of an entire political culture.

The Brexit leaders have always considered Remainers mugs: not because they lost the vote, but because they told the truth. Cummings endlessly mocks campaigners for highlighting the lie about the £350 million a week for the NHS, because he sees it as bad politics. That is the point. It may have been bad politics, but it was still an outright lie.

It might have been possible for a Leave campaign to win based on facts. Not everyone values migration, economic growth, or harmonising certain political arrangements with one’s neighbours. But the fact is that voters were never presented with valid or honest arguments, and were not, therefore, voting for the reality which subsequently transpired.

Brexit has exposed the corruption of our politics. This culture regards honesty and transparency as hopelessly utopian or naive; something more suited to a debating club than civil society. It treats politics as a game, in which the public must simply choose between different lies. It strips election campaigns of any substantive civic purpose and renders them items of theatre. It neuters even the concept of truth.

In the coming months, many thousands of words will be written, rightly, on Brexit’s economic consequences and the diplomatic storm approaching Northern Ireland. Perhaps we can also find the space for another question: why do British politicians think that voters not only expect lies, but deserve them?