The House of BlairSerbia’s Regime & the Mob

Tony Blair is being paid to advise the Serbian regime of President Aleksandar Vučić through his so-called ‘puppet’ Prime Minister, while Cherie Blair is representing it in a major legal case against the owner of the last independent TV channel in the country – despite growing international concern that the country is sliding into becoming a mafia-state.

The House of Blair’s alliance with the Serbian regime – dubbed by some the ‘Blair Vitch Project’ – is all the more peculiar given the history.

Now the President and the House of Blair are playing happy families – an astonishing turn of events that perhaps can only be explained by the Government of Serbia paying top dollar.

Back in 2016, Blair announced that the Tony Blair Institute for Global Change was going to step back from making money from advising foreign powers to concentrate 80% of his time on “not-for-profit work”. But Blair added: “I will retain a small number of personal consultancies for my income.”

The Tony Blair Institute confirmed to Byline Times that “the work we do with [Serbia’s] Prime Minister – which is in line with the work of other international organisations – is around the country’s reform programme and the digitalisation of public services. That is the sole focus of the team in country.”

Dobbed in by his old mate Peter Mandelson, I contacted the Tony Blair Institute who confirmed that the former prime minister was acting for Belgrade.

Serbia’s Prime Minister is Ana Brnabić, the first woman and first openly gay person to hold the office. But opposition figures say that she is a puppet and Vučić calls the shots. Challenged on this, Vučić has said: “The woman has her own brain. She is doing her job and wants to cooperate with me and with everyone in the Government.”

The Tony Blair Institute also said that the it “works with governments around the world, including Serbia, where our staff supports the strategic implementation of modernisation reforms across the country”.

But there is precious little evidence of modernisation reforms in Belgrade. Under President Vučić and his Serbian Progressive Party (SNS), media freedom has been throttled by a subtle play of favouring state-backed media concerns and squeezing the markets for independent platforms, combined with unsubtle proxies threatening critical voices with pressure and violence.

The mafia never appear to be very far from the Vučić regime.

One striking story suggesting close connections between the mob and the Government in Belgrade came in 2019 when police busted Jovanjica, the country biggest marijuana farm in Europe, seizing four tons of drugs.

It emerged that Vučić’s Deputy Prime Minister and also Interior Minister Nebojsa Stefanovic was “a frequent visitor to Jovanjica” and had not made himself available to “boast of the large seizure of drugs”.  Stefanovic had previously been filmed visiting the organic crop part of the farm, seemingly unaware of the massive dope plantation. An active trial is hearing evidence that senior police officers and security officials were close to the farm’s owner.

Only one cable TV channel has dared to probe the murky links between Serbia’s mafia and the Vučić regime: N1. The channel’s reporter on the marijuana farm scandal, Jelena Zoric, found a death threat on her doorstep: “This will last until it ends. It cannot be avoided.” 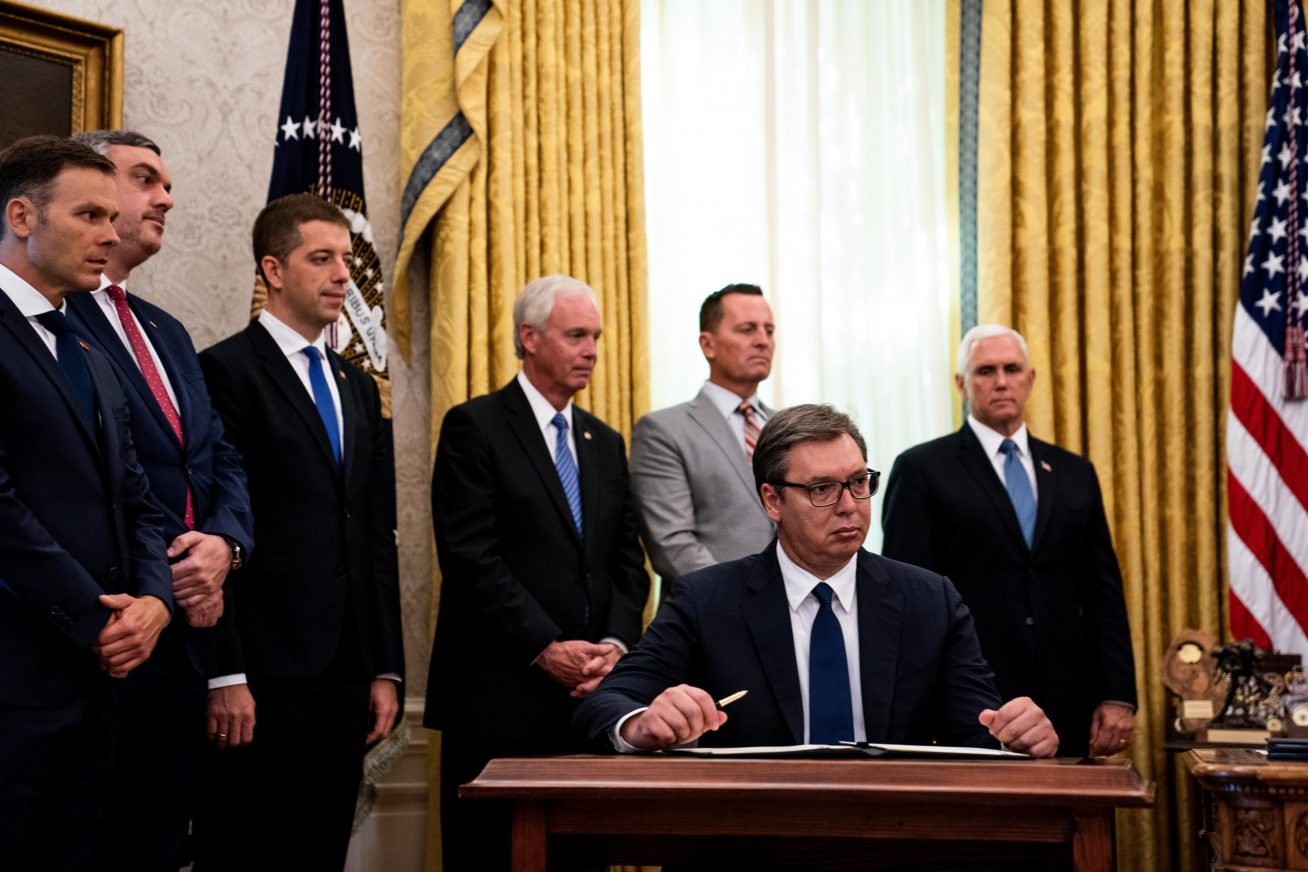 How the US and Israel Benefit fromThe Serbia-Kosovo Deal

A second scandal is how Serbian-made mortar shells from the Krusik state-owned arms factory ended up in the hands of Islamic State in Yemen.

In September 2019, investigative journalist Dilyana Gaytandzhieva revealed how part of a $8million consignment of 100,000 mortar shells manufactured by Krušik sold to US Federal contractor Alliant Techsystems were filmed by ISIS in Yemen as part of its stockpile of weapons.

A second story showed how private companies bought munitions from Krusik at bargain prices, naming Branko Stefanovic, the father of Interior Minister Nebojsa Stefanovic, as a broker. Three days after that story appeared, police secretly moved against, not the arms dealers but the whistle-blower, Aleksandr Obradovic. He was charged with revealing business secrets and placed under house arrest. N1 reported on the scandal and, after anti-Government protests, Obradovic was freed.

Interior Minister Stefanovic denies any wrongdoing. There is no suggestion that Tony and Cherie Blair are acting for a regime that wittingly manufactures weapons for Islamic State.

N1, the cable news channel, partnered by CNN, is caught in the crosshairs of Vučić’s crackdown on independent media. Reporters Without Borders (RWB) has described N1 as “the only big independent television in Serbia” and many of its reporters have been targeted as “traitors” and “foreign mercenaries”, receiving hundreds of threats of physical violence through social media. N1 received a group death threat in 2019, stating that journalists and their families would be killed and the studio blown up. A 2020 RWB report said: “Serbia has become a country where it is often dangerous to be a journalist and where fake news is gaining in visibility and popularity at an alarming rate.”

N1 is owned by United Group, based in the Netherlands but run by a Serb businessman, Dragan Šolak. United fears that its wider TV and internet platforms are being targeted by the Vučić regime and has taken the Serbian Government to an international arbitration court. Batting for Belgrade as its lead lawyer is Cherie Blair on behalf of her company, Omnia Strategy.

Tony Blair’s reputational management entity, the Tony Blair Institute for Global Change, was working on media strategy for the Serbian Government in 2015. N1’s executive producer, Igor Bozic, told me: “There were two Brits working for Blair that had offices inside the Government in Belgrade.”

Tony Blair’s long-time consigliere, Lord Peter Mandelson, has also been rumoured to be batting for Belgrade.

When I put that to him by Whatsapp, he replied directly, not asking for the text exchange to be off-the-record: “I have never been to Serbia, never spoken to the Serbian Government, not been asked for anything by anyone in Serbia. So you have been misinformed. I know who you may be thinking of but it isn’t me.”

I replied: “Peter, who may I be thinking of?” He replied: “Isn’t it obvious?”

In 2014 Vučić, then Prime Minister, told a group of British reporters that Mandelson is “one of the brightest guys I’ve ever met”. The Daily Mail quoted Vučić as saying: “Mandelson is the best motivator I’ve ever seen in my life. Some people would say he’s on the dark side, but he has a very strong, unbeatable personality, you cannot frighten him, he’s very influential, he can have a real impact.”

The Serb propagandist and the British reputational management tsar had met sometime in 2012 – the same year that Vučić became Deputy Prime Minister. It is possible that Mandelson met him before he assumed office: if so, his claim that he had never spoken to the Serbian Government may not be totally frank.

Vučić said in 2014 that Mandelson had not been able to work for the Serbian Government at the time because he was too busy, but that he had intended to call him again to renew the offer of paid work. Asked in 2014 if he would consider paying Tony Blair, the Daily Mail reported Vučić as saying: “No, he’s too expensive.” No longer. 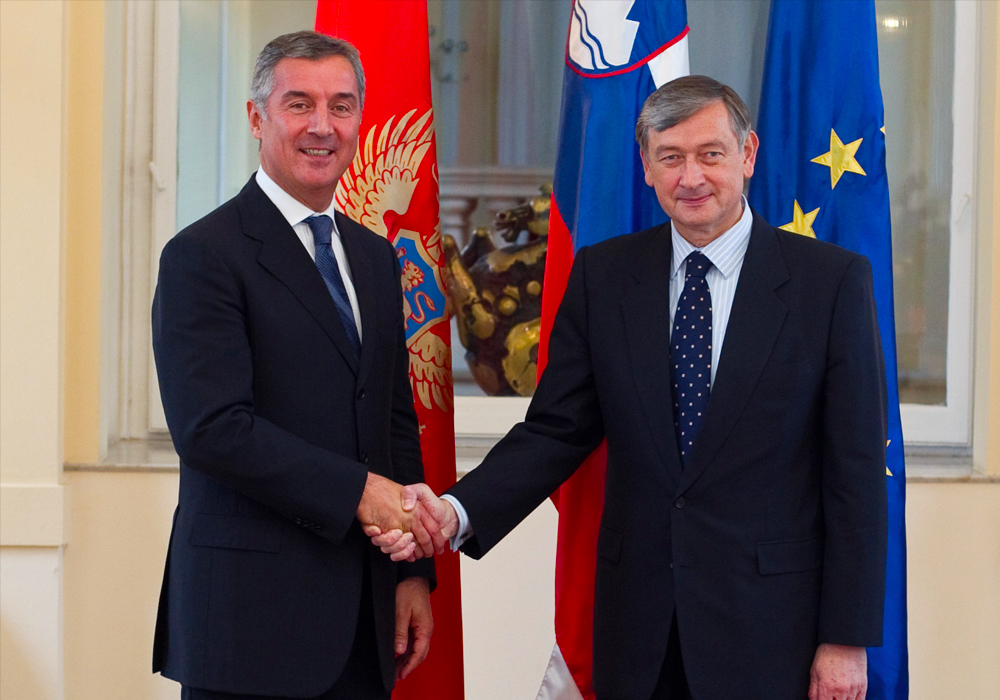 Is It Game Over For Montenegro’s 30-Year Autocrat?

When I put the Mail’s story that Vučić had met Mandelson to Mandelson, he replied: “I have never been in Belgrade. I have never been offered a job. I have never seen this story before (I am not a Daily Mail reader). The truth is staring at you in the face but I am not going to join the dots for you, sorry.”

Dobbed in by his old mate Mandelson, I contacted the Tony Blair Institute which confirmed that the former Prime Minister was acting for Belgrade.

According to Lecic: “The Vučić regime is a corruption engine, protected by a well-oiled propaganda machine. Freedom is getting smaller, people are afraid of standing up to them. We are frog being slowly cooked in the pan and now the water is boiling. N1 is great. They are the journalists who ask the awkward questions.”

A report by the EU Parliament published in March highlights a “deterioration of media freedom and increase in abusive language, intimidation and even hate speech towards members of the parliamentary opposition, independent intellectuals, NGOs, journalists and prominent individuals” and urged the Serbian Government to take “immediate measures” to ensure media freedom.

The SNS has been widely accused of connections with organised crime and corruption, erosion of the rule of law, and a drift towards authoritarianism.

Freedom House’s annual Nations in Transit 2020 report stated that Serbia was no longer a democracy but had instead become a hybrid regime in the “grey zone” between “democracies and pure autocracies”. The report cited “years of increasing state capture, abuse of power, and strong-man tactics employed” by President Vučić. The report continued: “Although the current SNS-led Government came to power in 2012 promising to battle Serbia’s widespread corruption, the problem appears to have worsened, not improved, in the years since.”

The University of Gothenburg’s V-DEM Institute has called Serbia an “electoral autocracy… mainly due to media censorship, the Government’s attempt to influence the work of the media”, but also “a reduced space for the work of civil societies and academic institutions” as well as “the concern over the quality of the election system”.

Privately-owned national broadcasters and popular tabloids regularly participate in smear campaigns against the political opposition and other perceived Government opponents. The level of political control over the media has led to a situation of poorly-evidenced and biased media reporting on the key foreign policy actors. Coverage of Russia is markedly positive compared to that of the EU and the US. The head of the EU delegation in Serbia noted recently that “freedom of media is one of the key topics in the accession process and I constantly advocate the improvement in that area”.

Last year, the Independent Journalists’ Association of Serbia (NUNS) documented 119 incidents of pressure or violence against journalists. In December 2018, investigative reporter Milan Jovanović, who reported extensively on corruption, was the victim of an arson attack. An SNS official was later sentenced to more than four years in prison for the attack.

In September 2019, Aleksandar Obradović, a whistle-blower who leaked documents exposing corruption in a state-owned company, was arrested on charges of espionage and sent to prison sparking mass protests that eventually led to his release. In April 2020, a journalist for Nova.rs, Ana Lalić, was arrested and charged after objectively reporting and publishing a report on the poor working conditions in a local hospital during the COVID-19 pandemic, on the alleged basis that such a report could incite panic.

Now, while independent journalists at N1 and its owners are under increasing attack, critics would argue that Tony and Cherie Blair are too close for comfort to a Government that, in its turn, brushes up against organised crime. As they march to the drum of an increasingly authoritarian regime and, aware of Serbia’s bloody history, many in Belgrade do not think that is good.