A controversial supplier of personal protective equipment (PPE) to the UK Government during the Coronavirus pandemic confessed that its agent in China intended to bribe local factory officials, Byline Times can reveal.

The Department of Health and Social Care (DHSC) is currently engaged in a legal case with the Good Law Project and Everydoctor – two non-profit initiatives – about the awarding of PPE contracts during the pandemic using an expedited ‘VIP’ channel.

One company that benefitted from contracts worth some £340 million, which are scrutinised by the legal case, is a pest control and PPE firm called Pestfix.

The DHSC is contesting the claim, which is being heard remotely and is expected to end next Tuesday. The Good Law Project this morning released its skeleton argument for the proceedings, which claims that “Pestfix’s agent in China… secured these gowns by bribing local officials”.

This is backed up by evidence, seen by Byline Times, of WhatsApp messages between a senior staff member at Pestfix and a Government representative – referring to an agent in China known as ‘Little Man’.

“Friday gowns uncertain due to what you have described above,” the Pestfix representative says. “Little Man confirms that the factory has had all its existing orders wiped due to losses incurred from spiralling costs of raw materials. Little Man is bribing officials at the factory (of his own doing not ours) which is how he gets what he wants, but may be counter-productive, if we are syphoning off Uniserve [another UK Government supplier].”

The evidence does not clearly indicate whether the intended subject of the bribe was a public official or simply and solely a factory worker.

The UK Government representative responded by pointing out that he was no longer responsible for handling the logistics of these PPE deals. However, he did not seem to acknowledge or express any objection, in this forum, to the use of the suggested bribery.

The Government has implemented policies and laws that are intended to prevent the use of bribery in public sector work. Chartered Institute of Procurement and Supply (CIPS) guidance stipulates how companies engaged in Government work must conduct extensive due diligence to minimise the risk of bribery taking place. Firms in breach of Government procurement rules can be barred from conducting public sector work in future, or in the worst case can face legal repercussions.

The CIPS guidance explicitly mentions third-party agents in foreign countries, saying that companies that hire agents must “bring with it the requirement for the highest levels of due diligence in order to mitigate the risk of bribery”.

Bribery is obviously treated more seriously if a public official is involved, which is not known in this case. It is also not known whether the Government subsequently addressed this matter with Pestfix, or whether the bribe was ultimately sent in this instance.

Due to insufficient stockpiles of PPE and the sudden first-wave of the pandemic, the Government required the urgent supply of masks, gowns and gloves in the spring of 2020. Many frontline workers were forced to fight the disease with insufficient PPE, and the Government has insisted that unprecedented action needed to be taken to replenish stocks.

The Government “called upon resources from across the Civil Service and beyond in order to respond to a crisis the like of which has not been experienced in a generation,” the DHSC’s skeleton argument says.

“The outcome was the development of a process which was inevitably multifaceted, evolving and imperfect, but one which nonetheless lawfully achieved the objective of working effectively and efficiently to secure the PPE which the country desperately needed.”

“As a proud British-registered company with a long history of supplying PPE to the public health sector, we are delighted to have completed to spec and ahead of schedule,” Pestfix previously told Byline Times. Pestfix declined to add a new comment.

The Government’s procurement of PPE during the pandemic has been plagued by multiple controversies. The National Audit Office – the independent spending watchdog – has detailed how officials entered into contracts without conducting full due diligence or conflict of interest checks.

The NAO found “a lack of documentation recording the process for choosing the supplier, the justification for using emergency procurement, or any considerations around potential conflicts of interest,” it reported in November.

The Good Law Project has continued this investigation – further exposing the Government’s lack of due diligence procedures in some instances, and the influence of well-connected individuals on procurement decisions that were worth hundreds of millions of pounds. Many more examples are included in the Good Law Project’s skeleton argument.

While the Government ultimately managed to address its PPE shortage, it’s now known that a vast amount of equipment was procured at inflated prices. In September 2020, the Government pledged that it would buy a stockpile of PPE equivalent to 120 days of “reasonable worst-case” demand for England – yet in March this year the country owned eye protectors to last five-and-a-half years, IIR face masks to last two-and-a-half years and gowns to last two years.

In normal times, the Government would have paid £2.5 billion for the amount of PPE it had purchased before November last year. In the global rush that occurred amid surging Coronavirus cases, the DHSC approved £15 billion of spending. At this time, the NAO noted, £10.5 billion worth of Coronavirus-related contracts had been awarded by the Government without inviting formal competition bids.

Sian Norris, 12 October 2021
Byline Times warned the public about ‘herd immunity’ from the beginning of the Coronavirus crisis – now two influential House of Commons committees have concluded that it was the result of Boris Johnson’s handling of the pandemic in its early stages 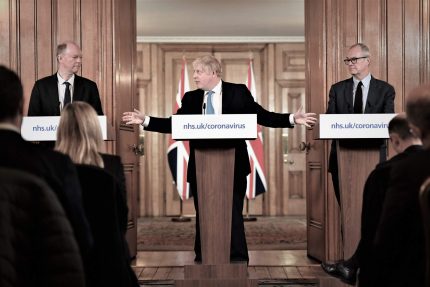