Sian Norris speaks to protestors in Warwick who are demanding that their university takes action on sexual assault – but is the sector as a whole failing to protect women students?

On a chilly April day in the heart of the University of Warwick’s campus, two tents occupied by a small group of feminist protestors are defying the weather, the police and the university authorities to protest against sexual violence and to demand a safer environment for women students.

“I made a promise to the student body,” camp co-organiser Cai Kennedy told Byline Times. “Until the university meets our demands, we will do whatever it takes.”

According to recent data published by the Office for National Statistics, 11.76% of full-time students had experienced some form of sexual assault between the end of March 2018 and the end of March 2020, making them the most high-risk group by the ‘respondent’s occupation’. The data also found that 12.9% of women and girls aged 16-19 had also experienced some form of sexual assault in that period – the next highest prevalence was in women aged 20-24 at 10.5%.

An estimated 50,000 incidents of sexual abuse or harassment take place in English and Welsh universities each year.

Sexual violence, then, is a live issue for women on university campuses – not least at Warwick where in 2018 the university faced a scandal after young male students were found sharing rape threats in a group chat on WhatsApp.

“Our university has a history of not responding well to these issues,” said Brin Arnold, one of the protestors. She explained how, after it was revealed in a nationwide survey that 97% of young women had experienced sexual harassment, “a lot of people at our uni came out on Snapchat talking about being assaulted. It felt like every few days a new story would come out”.

The protestors have a clear set of demands they want the university to implement, agreed in coalition with other student societies. Chief among them is to reform the campus’ security, including by having a separate security team dedicated to working on sexual assault.

“Most of the security team on campus are men,” Kennedy said. “The last thing a woman wants after she has been assaulted by a man is to go and see another man whose uniform resembles that of a police officer. It’s very intimidating. We want a separate group who you can go to after you have been assaulted and you can say look, their one goal is to support you.”

The University of Warwick has responded to the protest and a spokesperson told Byline Times that “everyone has the right to feel safe and supported at Warwick. We believe the most effective way to tackle this issue is by working in close partnership with the Student Advisory Group on Sexual Misconduct, which includes the University, the Students’ Union as well as members of our student community to discuss student feedback and to identify and implement improvements.”

Currently, there are no mandatory guidelines for universities on how to respond to sexual assault allegations – although in 2020 the Office For Students published recommendations for a “robust complaints procedure”. In most cases, an investigator is appointed who interviews witnesses before a panel decides on whether the complaint should be upheld. This means that universities can effectively police themselves.

One lecturer, who wished to remain anonymous, told Byline Times that when a student approached them to allege a rape, a senior male member of staff took over the investigation, excluded the female staff member who was originally approached, and found in favour of the alleged perpetrator.

For Eleanor (not her real name), a post-grad student at Queen’s University Belfast, trying to report sexual violence has been a process of “uncovering depths and depths of dysfunction”.

“There is literally no single positive that I’ve had in the response at all,” she told Byline Times. “Every time I talk to somebody there’s a part of me that feels trapped, hopeless – that there’s nothing I can do for my situation.”

Eleanor reported a fellow student for sexually aggressive behaviour but believes that the university’s response has failed to meet her needs. She said how she felt pressured to report to the police and go to court – something she was willing to do – but in the immediate instance she needed reassurance from the university that they would intervene as “right now I just need to feel safe on campus”. 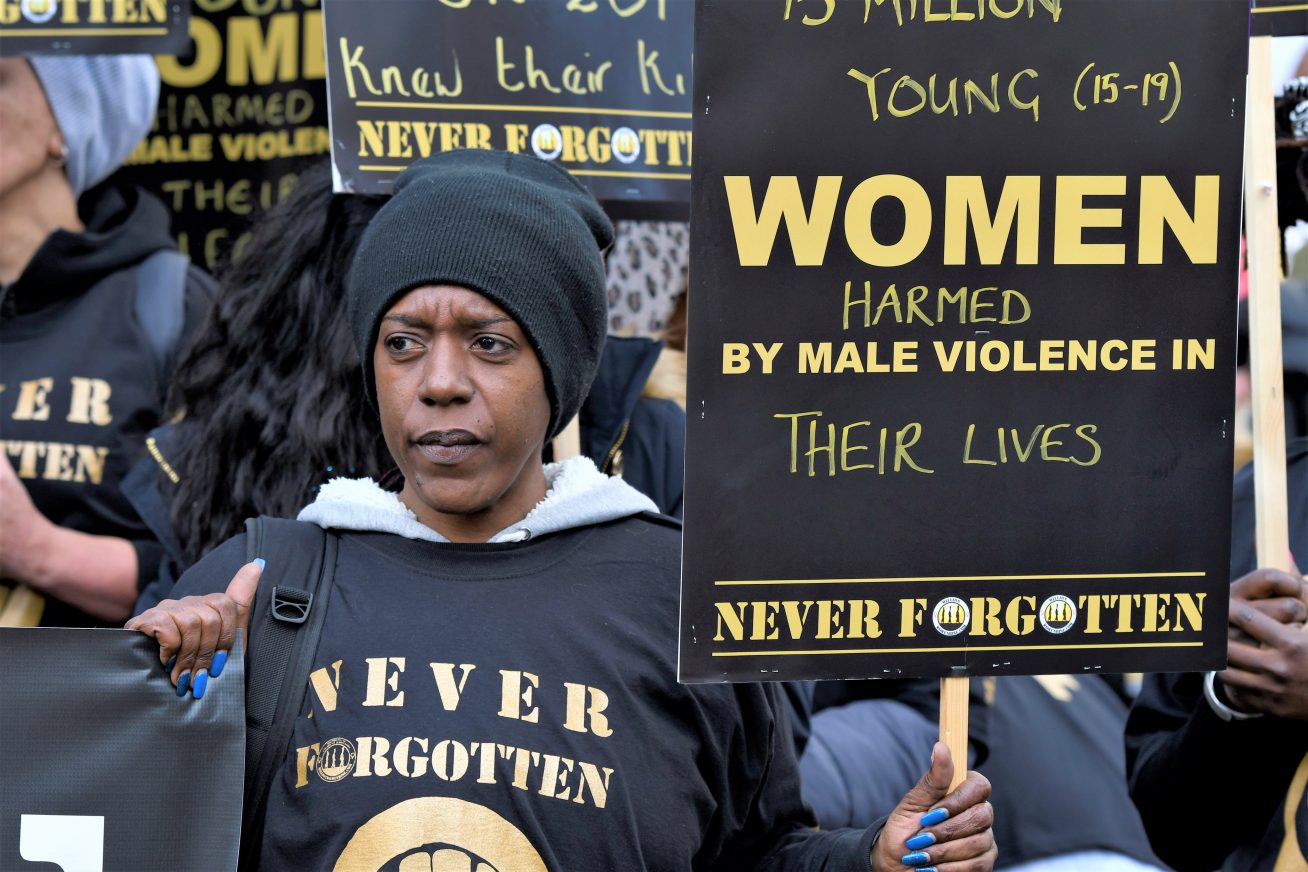 Treat Violence Against Women as a ‘National Emergency’

Eleanor’s alleged perpetrator still attends her classes. “He’s not stopping,” she said. “The university keeps using terms like ‘due process’ even though it’s a school not a court. ‘That he has a right to be protected so we aren’t going to share information’. It behaves like it’s a court of law. The level of evidence you have to provide if you accuse somebody. You are also constantly told if you are a student you are at risk of being found to have made a vexatious claim and you will be disciplined if the claim is found to be vexatious. That is of course a huge deterrent… They don’t have a duty to ‘due process’. They do have a duty to safeguard.”

Queen’s University Belfast did not respond to Byline Times’ request for comment.

Eleanor is not alone. A social media account called QUBSurvivors provides a platform for students who have experienced sexual violence in the university to share their story.

One survivor wrote how “when I finally got the courage to report him to Queen’s I had to attend interviews and was kept out of the loop. He was not removed from my course, instead I was suggested to either take leave or a year off. I was told that an appropriate sanction was given to him but I wasn’t allowed to know what it was”.

Eleanor recognises that, as a mature student with a knowledge of the law, she is in a position of privilege that allows her to challenge the university. But, for younger women like Erin, who was forced out of her further education college following panic attacks brought on by seeing her rapist on campus, dealing with the authorities has been even more challenging.

A boy raped Erin just before her 16th birthday. She now believes he has attacked other girls. The assault led to her developing Post Traumatic Stress Disorder (PTSD) which can be triggered by seeing her perpetrator – even by sexually aggressive talk. Erin believes that the college failed her in two ways – first in dealing with the rape allegation, and second in supporting her mental illness.

She said that, in response to her allegation, the college immediately asked “was anything done about it, was there any criminal convictions?”

Erin had chosen not to make a police report due to concerns about the impact the process would have on her mental health. “So [the college] didn’t do anything about him,” she told Byline Times. “They didn’t talk to him or confront him. No staff did anything. They said they couldn’t do anything unless he’s actually in the room with you.”

The situation left Erin feeling abandoned. A panic attack in the classroom was met with a teacher telling the other students to “ignore her, it’s just another Tuesday”. Eventually, the college asked Erin to leave.

Erin believes that, while the college protected her perpetrator, she was let down.

“Why is it about his safety when it’s not even him who needed to feel safe?” she said. “People say ‘what about his education?’ – but what about my education? I got kicked out for having panic attacks when he raped me. I am getting kicked out and they defend him and his actions. It doesn’t make any sense to me.”

Back in the pavilion at the University of Warwick, and the occupiers’ demands are posted on the building wall, annotated to explain what has and hasn’t been done.

The university has agreed to signpost safe spaces, improve lighting, improve the safety section on an app designed for students, and distribute information about support. It has also agreed to a ‘sanction report’ which clearly outlines minimum punishments for sexual offences.

But, so far, there are still demands that are going unmet. This includes the security request and a demand for a “zero tolerance policy to sexual violence on campus” that would include “permanent banning of convicted sexual assaulters” from university spaces and making sure “survivors are included and heard throughout the process” when sanctions for assaults are decided on.

The university’s response, Brin Arnold told Byline Times, is “making so many survivors of harassment and assault feel so alone and like what happened to them is not significant. It makes perpetrators feel like their actions are less significant than they actually are because the response isn’t equal to what it should be”.

Kennedy agreed: “Whether intentional or not, they are cultivating a rape culture.”

A spokesperson for the University of Warwick told Byline Times: “Our policy on sexual misconduct is clear – it will not be tolerated. Individuals who are found to have broken our values, either by the police or by our own comprehensive disciplinary processes, will face sanctions – which include expulsion or withdrawal from the university.

“We are working with all academic departments to incorporate active bystander support training for all new students from the next academic year, as well as with the students’ union, societies, and sports clubs on their own awareness campaigns and disclosure referral training. Staff are attending training sessions on the impact of sexual misconduct on individuals, as well as how to respond to disclosures.

“We are also currently running regular weekly sessions with the student liaison officer team for staff and students to find out more about Report and Support and we are committed to making it more visible online and on campus. Suggestions about how we can further promote and accelerate this are welcomed by the University. We recognise that there is always more we can do. We wish to thank all those who are working with us to help prevent sexual misconduct and how we deal with those who do not behave appropriately.”