A report published today by anti-racist organisations Hope Not Hate, The Amadeu Antonio Foundation and Expo has revealed the extent of anti-minority views in Europe – including how 30% of UK respondents hold negative views towards immigrant people.

This was the lowest negative rate of the countries surveyed – in Hungary, 60% had a negative view about immigrant people and 54% had negative views about the Muslim community.

The authors explained how “online spaces used to push anti-lockdown and conspiratorial explanations for the pandemic are providing a different pathway, one by which the incremental steps that build towards antisemitism, Holocaust denial and admiration for Hitler are in fact a progression through different conspiracy theories, which may contain antisemitic undertones but do necessarily require them.”

The report surveyed 12,000 people across Sweden, France, Germany, UK, Hungary, Poland, the Netherlands and Italy to gauge the level of anti-minority feeling in Europe.

However, only 29% of UK people surveyed said they had a “positive” attitude towards the Muslim community, a number the report authors call “depressingly low.”

Hungary had the highest negative view about the Muslim community, followed by Sweden with just under 50% expressing “very negative” or “quite negative” views. In France and Italy, the minority group experiencing the most hostility were the Roma community – in Italy 67% had negative attitudes while in France it was 62%.

The Black Lives Matter protests throughout the summer of 2020 “animated” the far-right across Europe, with groups using the response to the killing of George Floyd “to push their existing political platform to a wider audience”.

The report authors found that “some elements of the far-right that have traditionally distanced themselves from open racial politics, promoting instead ‘cultural nationalism’, have become more willing and open to explicitly racial politics in response to Black Lives Matter protests.”

The UK and Sweden had the second highest level of support for the Black Lives Matter protests, with 51% having a positive attitude towards the movement. Germany was top, at 52%, while Hungary had the lowest level of support – only 23% of respondents said they strongly agreed or agreed with the statement “I sympathise with the Black Lives Matter protests in highlighting racism and discrimination experienced by minority communities.”

Anti-Feminism on the Rise

Misogyny is closely intertwined with far-right politics, with sexism and male entitlement often acting as a gateway drug to white supremacism.

Far-right conspiracy theories around the Great Replacement – the belief that white people in the Global North, Australia and New Zealand are being “replaced” by black and minority ethnic people due to immigration and low white birth rates – are often accompanied by anti-abortion views that treat women’s bodies as exploitable resources.

In Ireland, where abortion was made legal followng a 2018 referendum, far-right groups “often combine antiimmigrant/refugee tropes with a hardline anti abortion rhetoric” with those who support abortion rights “deemed complicit in the “plot” to “replace” the native population, through a reduction in the native-born population.”

Similarly, online subcultures such as incels and Red Pillers – misogynistic groups who resent women for not having sex with them and believe there is a ‘war on men’ – often express violently racist sentiments towards black and Muslim people.

In the Western Balkans, far-right movements often see feminism as a threat to traditional values. The far-right group Serbian Action views “Marxism, feminism and homosexuality [as] against the laws of nature. Feminism is defined as a mental disease.”

The survey found that 28% of UK respondents believe that feminism “is definitely or somewhat responsible for the feeling of marginalisation and demonisation experienced by some men in society”. The highest number of anti-feminist responses came from Sweden, at 41%, while only 15% of Italian respondents saw feminism as demonising men.

It may be the case that men in countries with higher levels of gender equality are more likely to believe they are being disadvantaged by women having rights.

Political disaffection and a lack of faith in democracy often creates a gap where far-right movements can win support.

Of particular concern is the very low level of trust in Government in the UK – with only 6% of respondents thinking the political system works “very well” compared to 60% in Germany thinking it works “well”.

The report authors expressed concern that in the UK, far-right movements will “exploit the economic turmoil that is being caused by the pandemic” which is only bolstered by the belief that the Government is not working for the people.

Far-right political parties are also seeing growing support in Sweden and Italy. In the former, the anti-immigrant Swedish Democrats are polling at 21% while in Italy the far-right Brothers of Italy are at 12% in the polls – doubling their popularity since the 2018 election.

This may be explained by the collapse in support for the populist Five Star Movement who are now polling at 12% despite getting 28% of the vote in the election.

There was some good news though. Poland’s far-right Law And Justice Party, which in the past year has thrived on homophobic rhetoric and recently tightened the country’s ban on abortion, has seen a collapse in support – polling at 18.4% compared to its 32% vote in the 2019 election.

Across the border in Slovakia, the sentencing of far-right leader Marian Kotleba “for handing out checks to the amount of 1488 Euros on the anniversary of Slovak’s wartime state establishment” and conviction for the “illegal use of neo-Nazi symbols” could be “a significant blow to the party and its supporters.” Kotleba’s LSNS party won 8% of the vote in the 2020 elections. He is appealing the court’s decision. 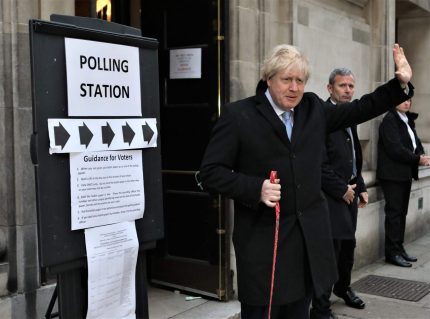