The NHS should “urgently investigate” after Byline Times uncovered “disturbing” figures showing that more than 4,000 patients, visitors and NHS staff were raped or sexually assaulted in hospitals over the past four years, the Shadow Health and Social Care Secretary has said.

An investigation by this newspaper has shockingly unearthed that 4,100 patients, visitors and NHS staff were raped (1,364) or sexually assaulted (at least 2,744) in a hospital setting between January 2019 and September 2022 – with 633 raped or assaulted while on a hospital ward. At least three of the incidents were against a female child aged under 13.

Data from 31 police forces in England and Wales based on reported rapes and assaults revealed the scale of sexual violence within hospital settings, with victims including patients and staff members.

Labour’s Shadow Health and Social Care Secretary Wes Streeting told Byline Times: “Hospitals ought to be safe places for patients and staff, but these disturbing findings show that is not the case for far too many people. The NHS should urgently investigate why these disgusting crimes are allowed to happen and on such a widespread scale.”

His comments were echoed by the Liberal Democrat spokesperson on health, Daisy Cooper, who said the “horrifying” figures “demand an urgent and comprehensive response” from the Government. She added: “Hospitals should be safe havens for vulnerable patients, visitors and staff and not somewhere where such abhorrent attacks can ever take place.”

The worrying findings come as Paul Grayson was jailed for 16 years this summer, after being found guilty of filming up the hospital gowns of unconscious patients, as well as recording four female nurses and a support worker while they used the bathroom.

Of the reported allegations, 5.21% resulted in a charge or summons.

One police force, which recorded 161 sexual assault and rapes across hospital estates, shared with Byline Times the reasons why charges were never brought following a reported sexual assault. Concerningly, in 26 rapes and 11 sexual assaults, no suspect was able to be identified.

Although most police forces did not provide data on the sex of perpetrators and victims, women are overwhelmingly likely to be the victims of sexual assault, with men most likely to be suspects. Women made up 87.1% of alleged victims in North Wales, and 88% of reports to West Mercia were made by women.

CEO of nia – a charity that supports women victims of men’s violence – and author of Defending Women’s Spaces Karen Ingala Smith told Byline Times: “It’s one thing looking at a number of examples of abuse and recognising that there is potentially a wider a problem for women’s safety. It’s quite another to see data making clear the extent of that problem and the sexual violence to which women are subjected.”

Navina Evans, chief workforce officer at NHS England, told Byline Times that “we take all complaints very seriously” and “I would strongly encourage anyone who has concerns about any form of sexual assault while on an NHS site to come forward, report it and seek support”.

‘Who Would Believe Me?’

Kate (not her real name) works at a charity that supports victims and survivors, including women who have been sexually assaulted in hospitals and other medical settings. For her, sexual violence is so prevalent within the hospital setting because of proximity and opportunity, where so many people are in close contact and in ‘private’ situations. There are also false assumptions that hospitals are safe zones, free of perpetrators.

“Patients are seen as too ill to abuse, while people who work in a caring role cannot be abusers,” she told Byline Times.

Kate believes the enormous power imbalance between patients at their most vulnerable and medical professionals can and is exploited by those who want to abuse that power.

One woman she supported was sexually assaulted by a doctor when he visited her home under the pretence of a house-call. Another woman suffered abuse at the hands of a doctor during her appointment – a chaperone’s presence was not enough to protect her.

Both of these women initially questioned themselves. They assumed that they were safe with a medical professional, and therefore anything that had happened must have been “helping” or part of the medical examinations.

When they came to realise the trauma they had suffered, a fear kicked in: who would believe a doctor could be a perpetrator?

“There is very little ‘whistle-blowing’ or situations where people can question what they see or hear,” Kate told Byline Times. “For example, the hierarchy within a hospital where doctors, especially older consultants, are never challenged or questioned, reproduces an environment where it is difficult to discuss any sort of behaviour.”

“The NHS and Government must take urgent action to review the adequacy of security measures to prevent further assaults from happening, and ensure that perpetrators are brought to justice,” said Cooper, who is also calling on the Government to provide “tailored support for victims when reporting incidents of this nature”, as well as better data collection.

“These horrifying figures make these demands even more urgent,” she told Byline Times.

Thousands of NHS StaffHarassed by Patients 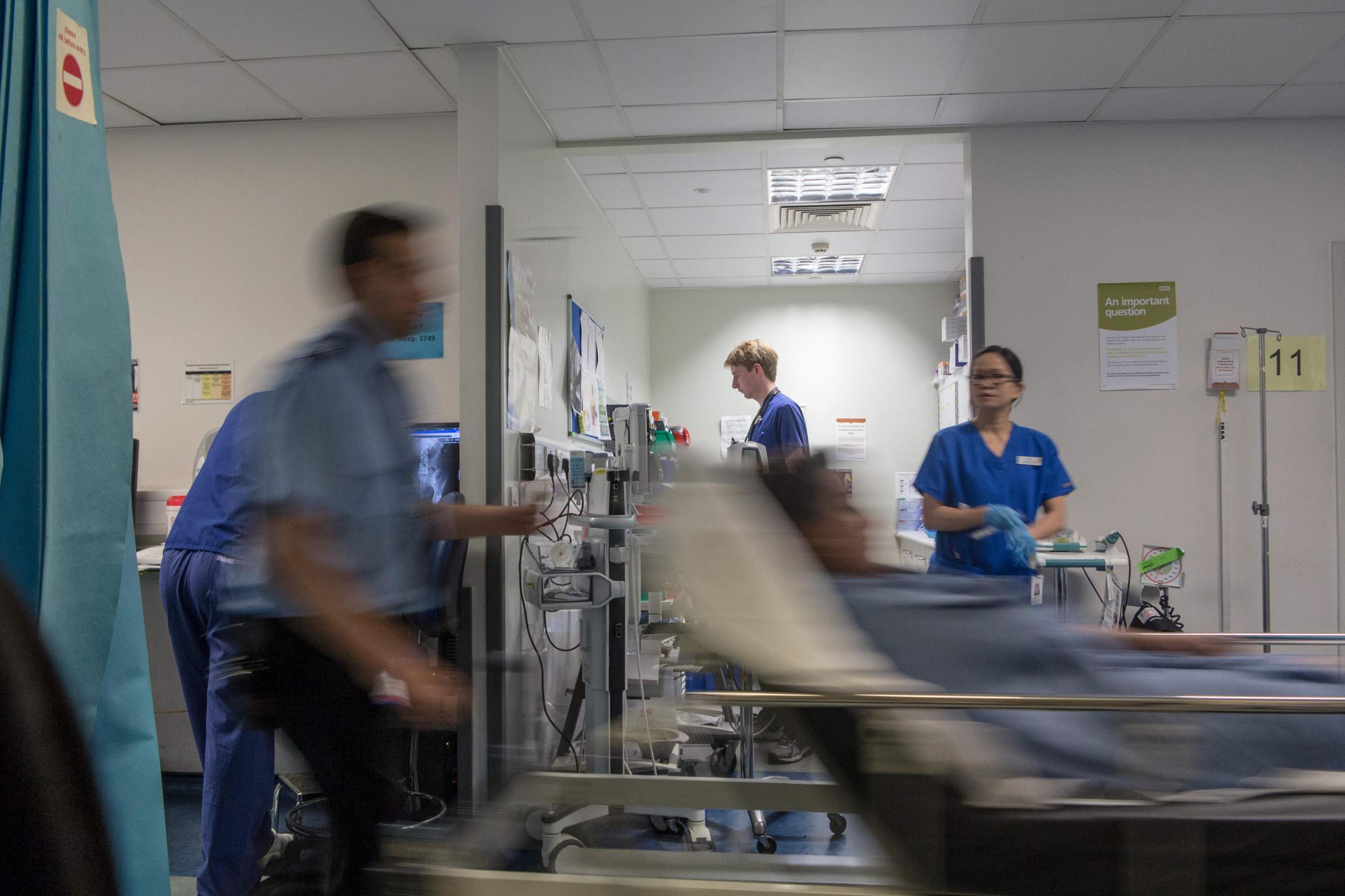 In the same time period analysed, there were 36,879 mixed-sex accommodation breaches across the NHS.

Mixed-sex hospital wards were banned by Andrew Lansley in 2010, with the NHS Operating Framework for 2012-2013 confirming that all providers of NHS-funded care are expected to eliminate mixed-sex accommodation. An exception is made where it is in the overall best interest of the patient.

“Mixed-sex hospital wards were supposedly banned in 2010,” said Ingala-Smith. “Women pay the price for the state’s failure to recognise its responsibility to our safety. The Health Secretary needs to ensure that urgent action is taken. Women-only spaces in healthcare settings must be provided and protected.”

It is not the case that mixed-sex accommodation breaches are the cause of sexual assaults and rapes, not least because there are incidents of assaults by people of the same sex, as well as assaults against or committed by staff members who may be caring for people of the opposite sex. Further, many of the reported assaults took place across the hospital estate, such as in car parks or waiting rooms.

However, mixed-sex accommodation breaches are cited as a cause for concern when it comes to patient safety and wellbeing. There were at least 1,019 sexual assaults reported by male and female patients on mixed sex mental health wards between April 2017 and October 2019, according to figures obtained by the Health Service Journal.

“I feel that there should be no mixed-sex accommodation especially in mental health wards given that a lot of mental ill health is due to trauma and gendered violence,” Kate said. “Breaches really are a source of concern not only because they represent problems with consent and boundaries, but also because it increases a woman’s feelings of helplessness and having no agency in any situation.”

“In my book, Defending Women’s Spaces, I argue that women have needs that cannot be met in mixed-sex spaces and that men’s increased use of violence, including but not only rape and other forms of sexual violence, means that the presence of males is a risk to women,” Ingala-Smith told Byline Times. “It brings me no pleasure to say that I was right. It makes me angry that women’s safety is so blatantly disregarded.”

Navina Evans, of NHS England, said “the NHS does not tolerate any form of sexual misconduct, assault, harassment or abuse in any setting” and “we are clear that all NHS trusts and organisations must have robust security measures in place to keep everyone who uses their sites safe – ensuring immediate action is taken in any cases reported to them”.

“Under the Conservatives, just 1.5% of rapes are charged,” said Streeting. “Labour will impose tougher minimum sentences on rapists and provide dedicated support for vulnerable victims”.

Thirty-one out of the 43 police forces replied to Byline Times‘ Freedom of Information request, with the Metropolitan Police and Greater Manchester Police rejecting the request. The results were based on keyword searches, where the word ‘hospital’ or ‘ward’ was used in the ‘crime summary/MO’ field.