Sian Norris considers the Russian President’s use of aggressive and violent masculinity to justify his invasion of Ukraine, and how it links to his Satanic conspiracy theories

The far-right operates in a world of toxic masculinity. It’s a world where male supremacy and female subordination is hard-wired in, just as much as white supremacy over racial minorities, and the desire for LGBTIQ to be wiped out.

It’s the world of the hard man, the strongman, il Duce and mein Führer, a world where you can grab them by the pussy, because you are a man; and she has to take it, because she is a woman.

In a bizarre Twitter thread about what Russia’s imagined takeover of Ukraine could look like, RT’s propagandist-in-chief Margarita Simonyan wrote how “our husbands will again turn their necks, looking at a black-browed Oksana” – victory, apparently, is about chasing girls and asserting male dominance.

Simonyan’s words come as Russian soldiers are accused of war crimes that include rape, while early on in the war disturbing footage emerged of a Russian woman giving her husband permission to rape Ukrainian women and girls.

“It’s not new,” Olena Shevchenko, head of Insight Ukraine, told Byline Times. “In all wars women and children are the ‘prize’. They are not actors. So attackers see sexual violence as a tool to show their dominance and achievement. Another reason is that sexual violence is still not seen as crimes. People think it is a need of men to have sex and women are objects”.

Such valorising of male supremacy comes as no surprise to those who have been observing Russia’s far-right turn before and during its invasion of Ukraine. Putin’s authoritarian rule has been characterised by his insistence that he is the strong man – riding topless on horseback, wrestling men to the floor, and attacking women’s and LGBTIQ people’s rights.

While Simonyan was glorifying Russian male-supremacy via the means of sexual harassment, the Duma approved the first reading that extends the existing 2013 “gay propaganda law”, which banned LGBTIQ content in media intended for minors. Now, it will mean information about “nontraditional lifestyles” or “the rejection of family values” would legally be on a par with pornography, promoting violence, or encouraging racial, ethnic, or religious enmity. In 2020, Russia adopted a constitution that defined marriage as solely between a man and a woman.

The trope of violent and aggressive masculinity both to justify and glorify its invasion of Ukraine is rooted in far-right ideology propagated by the man known as ‘Putin’s Rasputin’ – the far-right ideologue Aleksandr Dugin. His so-called ‘philosophy’ pushes the fascistic notion of the ‘natural order’ that rests on (white) male supremacy and female subordination, and where LGBTIQ should not exist. The order is enforced by violence and a constant state of war.

“It’s a simple idea based on traditional family creation, where men are the main, and women, children, family, country depend on men,” explained Shevchenko. “And Putin is the main man”.

All three pillars have been prominent in Putin’s aggression against Ukraine, and throughout his 20-year rule.

His imperialist ambitions, which seek to rollback history and progress to Tsarist Russia, are centred on nation-building.

His valorisation of male supremacy over both women – signalled by the decision to effectively decriminalise domestic abuse and incentivise childbirth – and the mocking of regions he considers “feminised” such as the West, shows the desire to enforce the fascistic ‘natural order’ of patriarchal authority.

And Russia’s invasion of Ukraine is, of course, the war through which the so-called natural order and the imperial nation is enforced.

Importantly, fascism requires a constant state of war, and this is crucial to Putin’s use of violent masculinity and far-right tropes in his speeches and rhetoric designed to support Russia’s aggression. 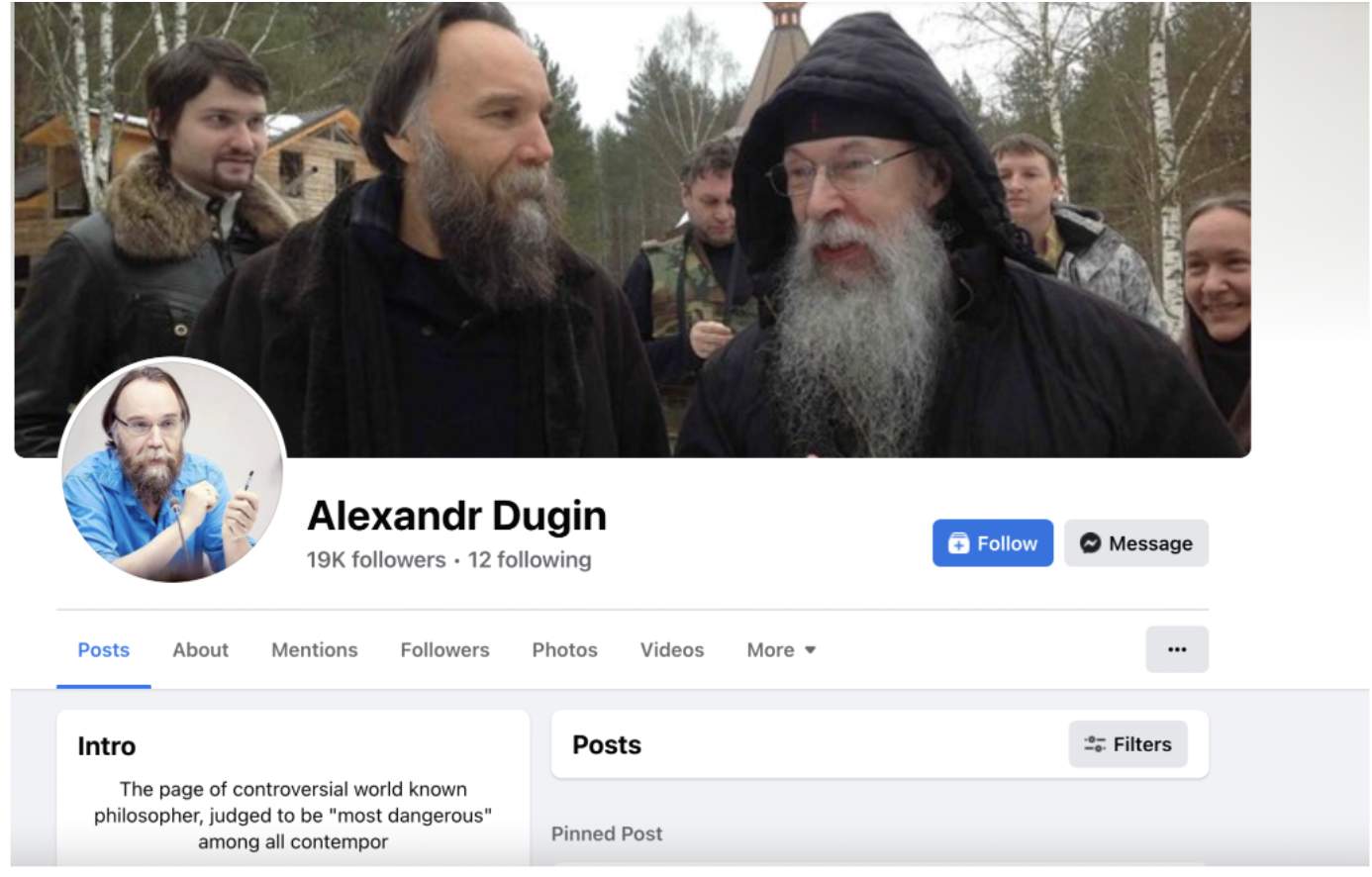 This brings us to the importance of the imagined threat. In order to justify a constant state of war, fascism needs an endless enemy – an existential danger to its natural order. It’s for this reason the tropes of violent masculinity, patriarchal authority, heteronormativity and female subordination become so important, including for Russia’s war in Ukraine.

For a leader that wants to reverse history and wipe out modernity, the existential threat to the so-called natural order of white male supremacy is progress – whether that’s women’s liberation, civil rights for black and minority ethnic people, and LGBTIQ rights.

To understand this, just spend five minutes on Dugin’s Facebook page which, despite Russia’s war in Ukraine and the line he offers in far-right conspiracy, continues to flourish on the social network. Dugin wants to reverse history to a pre-Enlightenment period, where the world was governed by nature, nation and war – not progress, science and rationality.

It’s for this reason that Putin has introduced a further far-right conspiracy in his violent rhetoric and justifications for rape, torture, the killing of civilians, and an imperialist war of aggression: the Satanic threat.

In a recent speech, Putin accused the West of having “moved on entirely to a radical denial of moral norms, religion, and family” and its “suppression of freedom itself has taken on the features of a religion: outright Satanism”.

The Satanic conspiracy theory is the logical endpoint of the fascistic natural order – if fascism is about defending nature, and if that nature is white male supremacy, female subordination, and the non-existence of LGBTIQ people, then it’s enemies have to be positioned as ‘unnatural’. Satan is the personification of what is unnatural, he’s the left hand to the right hand, the subversion of the natural order.

The positioning of progressive values – which are coded as ‘Western’ and embodied by women’s, black and minority ethnic people’s, and LGBTIQ rights as unnatural and Satanic, provides a clear existential threat to the natural order that fascism wants to preserve and entrench. Anti-gender rhetoric, and the valorisation of violent masculinity, “is just very useful for casual people to give them an idea of their ‘normality’ instead of ‘perverts’ in the East,” explained Shevchenko. “LGBTIQ issues and gender equality are used as triggers. So Putin just gave them a ‘super idea’”.

‘They Have Lost the Safety of Their Own Body’: Supporting Ukraine's Rape Survivors 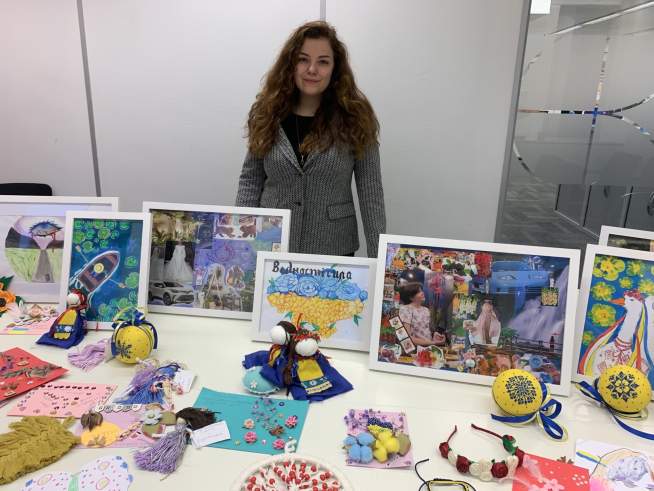