The Ministry of Defence (MoD) allows gay and unmarried personnel to be barred from serving in foreign militaries, but refuses to reveal which ones, an investigation by the charity Action on Armed Violence (AOAV) for the Byline Intelligence Team can reveal.

Every year some 200 British troops serve abroad as ‘loan service personnel’ (LSP), often under the command of a foreign military. Around a-third of these are stationed in Oman, even wearing the Gulf nation’s uniform.

The Government claims that they are used for training other nations’ forces, but very little is known about their role. Host nations for British military personnel in the past 10 years include Saudi Arabia, Kuwait, Brunei, Nigeria and Kenya.

However, a recent series of Freedom of Information (FOI) requests has found that British military personnel who are considering to apply for Loan Service are told:

“Applicants are to note that due to cultural and religious differences, a number of host nations will not accept single personnel, married unaccompanied personnel, personnel with same-sex partners or personnel with children from previous marriages with surnames that are different to that of the head of the family.”

A further FOI request asking for the names of these host nations was refused, as were other requests regarding the role, conduct, disciplinary action and uniform protocol of Loan Service personnel. They were rejected on the grounds that it would “adversely affect relations with our allies”.

An MoD spokesperson said: “The MoD is committed to being an inclusive employer and is proud to encourage diversity in the Armed Forces. However, where MoD personnel are deployed on Loan Service to support the UK’s operational objectives, they must adhere to the entry requirements and laws of the host nation.

“Personnel who volunteer for a Loan Service tour may be subject to the laws of the host nation when not on duty and are required to consider the implications on them and their families.”

A Shortlist of Repression

Despite the MoD’s refusal to declare the names of host nations that restrict the backgrounds of foreign military personnel, likely candidates emerge when the strict anti-LGBT laws in a number of the applicable countries are considered.

In Oman – the largest destination for Loan Service personnel, with 65 personnel stationed there in July 2021 – consensual sex between two men is punishable by up to three years’ imprisonment, although it is thought that prosecutions will only come from incidents that create a ‘public scandal’.

In 2018, four men were arrested for posting a video of two of them cross-dressing. The two men in the video were sentenced to four years in prison, while the pair that had filmed and posted it online received a three-year sentence.

Some consider Oman to be one of the more LGBT-friendly Gulf states, but when an Omani newspaper made this suggestion it was censored, forced to apologise and the editor was barred from leaving the country.

The UK has close ties to Oman. There is a permanent British naval base in Duqm, which is currently being tripled in size, as well as nearly 100 British military personnel typically loaned to the small Gulf state.

Oman’s police are trained and armed by the UK; exports of £17.9 million worth of tear and pyrotechnic ammunition were received by the autocratic state in the past five years. In May last year, Omani police used British-made tear gas to repress peaceful protests.

The UK’s close relationship with Saudi Arabia also has long been questioned due to the Kingdom’s appalling human rights record, particularly its bombing of Yemen. When it comes to LGBT rights, this is no different. Same-sex sexual activity, as with all sex outside marriage, is outlawed with a maximum sentence of death. Last year, 35 British loan service personnel were based in Saudi Arabia.

Kenya similarly has very close ties with the UK military.

According to the Human Dignity Trust, same-sex sexual activity in Kenya is prohibited under the Penal Code 1930, which criminalises acts of ‘gross indecency’ and ‘carnal knowledge against the order of nature’. These provisions carry a maximum penalty of 14 years’ imprisonment. Only men are criminalised under this law.

Homosexual activity is punishable in the state by up to seven years in prison. A court ruling in February overturned a law against ‘imitation of the opposite sex’ that was being used to prosecute transgender people. The appeal was sparked after Maha al-Mutairi, a transgender woman, was arrested after she posted videos online accusing police officers of raping and beating her during a seven-month period of detention in a men’s prison in 2019, after she was convicted under the discriminatory law. 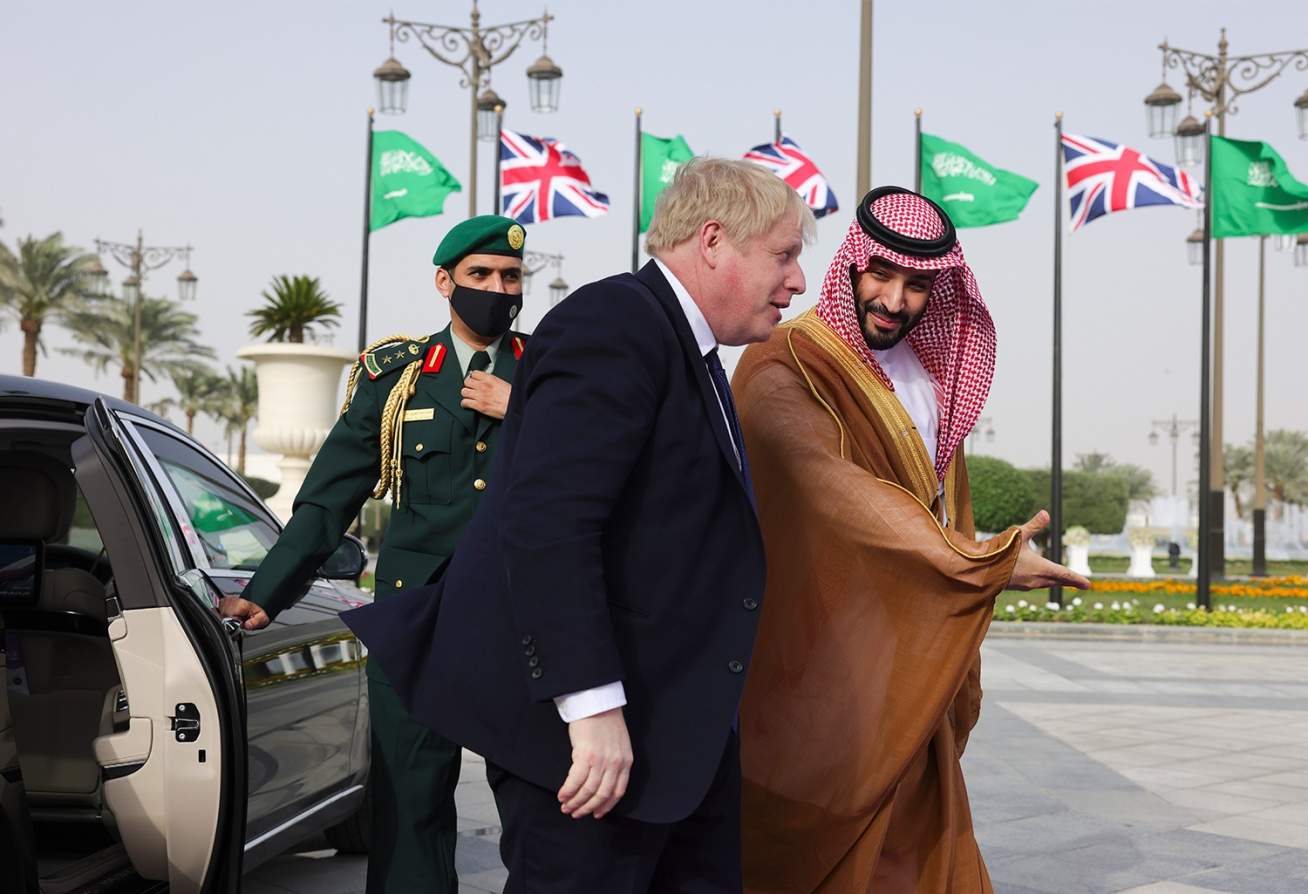 Lesbian, gay and bisexual people can seek asylum in the UK if they face persecution in their home country due to their sexual orientation. Between 2015 and 2020, there were more than 10,000 such applications. 2,956 were initially granted, with a further 1,875 allowed after appeal. In other words, there was a 47% success rate for these applications.

In Nigeria, the maximum penalty for same sex sexual activity is 14 years’ imprisonment. The country’s laws criminalising ‘carnal knowledge against the order of nature’ and ‘gross indecency’ were inherited from the British during the colonial period, in which the English criminal law was imposed upon Nigeria.

British loan service personnel have maintained a consistent presence in Nigeria for more than a decade.

The UK has been criticised for its stance towards repressive regimes – with Prime Minister Boris Johnson recently travelling to Saudi Arabia in an attempt to boost energy exports amid Russia’s war in Ukraine.

Responding to a question about the execution of three people by the Saudi state as he arrived in the Kingdom, Johnson said: “In spite of that news you’ve referred to today, things are changing in Saudi Arabia. We want to see them continue to change and that’s why we see value in engaging with Saudi Arabia and why we see value in the partnership.”

Despite the Prime Minister’s rhetoric, circumstances do not seem to be changing quickly in the Kingdom, with its rulers continuing the brutality that led to the murder of Washington Post journalist Jamal Khashoggi in 2018.