In the first of a two part investigation, Sian Norris reveals the phenomenal funding by Russian oligarchs and their US allies of anti-gender, religious-right influence wars

Spend any time on far-right Telegram and Gab channels in the wake of Putin’s invasion of Ukraine, and one theme keeps popping up – homophobic and transphobic jokes.

For these men, and it is mostly men, Putin’s regime in Russia provokes admiration because, in part, of his anti-LGBTIQ and anti-feminist policies that include a ban on so-called “gay propaganda”, the effective decriminalisation of domestic abuse, and attempts to withdraw legal recognition of trans people.

These information wars are designed to sow division – often positioning a “decadent” European Union in direct opposition to “traditional” values. Taking their cue from Steve Bannon, Putin’s regime has “flooded the zone with s**t” – while the Russian anti-gender funders and activists have worked hand-in-hand with the religious right in the US to spread their agenda and influence the region.

Between 2009-18, at least $186.7 million of Russian oligarch funding for anti-gender causes came into Europe – although the true figure may well be higher. Russian money has found its way to organisations and campaigns like CitizenGO, a Spanish petition platform, the anti-equal marriage Mum, Dad & Kids initiative, the Novae Terra Foundation in Italy, and the Steve Bannon-linked Dignitatis Humanae.

Linking Russian money and US campaigning is the World Congress of Families, an international conference that brings together anti-LGBTIQ, anti-abortion politicians, activists and campaigners. Its President is the National Organisation for Marriage’s and CitizenGO board member Brian Brown.

Brown is also President of the Howard Centre for Family, Religion and Society, an anti-abortion organisation that is part of the WCF. Speakers at recent congresses include Hungarian Prime Minister Viktor Orbàn and Italy’s far-right politician Matteo Salvini.

The Russia representative of WCF is Alexey Komov, who works for Konstantin Malofeev – an oligarch with an estimated wealth of $225 million and who is known by US intelligence as Putin’s “right arm for operations of political interference in Europe”.

Between 2009-18, at least $186.7 million of Russian oligarch funding for anti-gender causes came into Europe

Malofeev is alleged to have funded and armed the rebels and militias of eastern Ukraine in 2014 and has since been under sanctions since the annexation of Crimea. He also sought to use LGBTIQ rights as a wedge issue in the country, claiming that the battle over sexual and reproductive rights was instrumental to the struggle over whether or not the country would join the EU, which he falsely claimed forces member states to “allow propagation of homosexuality and gay parades”.

Russia has consistently used anti-LGBT politics to influence Eastern European countries to return to its fold and away from the EU. This phenomenon has been well documented. To achieve this, WCF has become a crucial platform.

Komov is a staff member at Malofeev’s foundation, the St Basil the Great Charitable Foundation. He is responsible for the Foundation’s international operations, forging links with European organisations like CitizenGO, WCF and Agenda Europe – a network of right-wing religious conservatives that campaigned against equal marriage and abortion throughout the 2010s.

At the World Congress of Families in Tbilisi, Georgia, in 2017, Komov gave a speech where he argued that LGBTIQ rights were a Bolshevik plot. Russia then came to its senses in the 1930s, he claimed, exiling Trotsky and other radicals, who decided to take over the world with “cultural Marxism”. His speech, laced with conspiracy theories, reflects how the 1917 revolution legalised abortion and removed anti-homosexuality laws from the statute books – acts Stalin reversed.

Through Komov, the anti-gender movement in Europe and the US is linked to Russian oligarch money, as Russia increasingly wages an influence war in the West, supporting far-right actors and spreading fascistic ideologies in order to fuel division. But the charitable foundation is just one of Malofeev’s projects. He also runs a conservative think-tank, and a TV channel that once hosted US far-right conspiracist Alex Jones and won notoriety for running a homophobic advert offering a one-way ticket out of Russia to anyone who “can provide a medical certificate proving that they are sodomites or have other forms of perversion”.

A second oligarch invested in anti-gender activism is Vladimir Yakunin, a railway magnate whose wife, Natalia Yakunina, has links to the WCF. Like Malofeev, Yakunin is under sanctions from the United States and Australia for his alleged involvement in the 2014 annexation of Crimea.

In 2014, Russia was planning to host the WCF – the US religious-right’s bonanza conference – but sanctions meant the event could not proceed. Organisers worked hard to rebrand the standard WCF as the ‘Large Families and the Future of Humanity Forum’ – maintaining the same dates, location, speakers and participants. Shaltai-Boltai leaked documents that revealed Yakunin’s St. Andrew the First-Called Foundation to be a major funder of the event through its sponsorship of numerous participants, including Western anti-gender leaders.

Attendees included Hungary’s Minister of Family Affairs Katalin Novak, French MEP Americ Chauprade, former Vice-speaker of the Greek Parliament Maria Kollia-Tsaroucha – as well as representatives from Human Life International and CitizenGO. Representing the UK was Patrick Buckley from the Society for the Protection of Unborn Children (SPUC) and Benjamin Harris-Quinney of the Bow Group.

According to a report by Neil Datta and the European Parliamentary Forum for Sexual and Reproductive Rights, the forum “was a first proof of financial links between Russian and Western anti-gender actors ranging from civil society organisations to parliamentarians and ministers”. 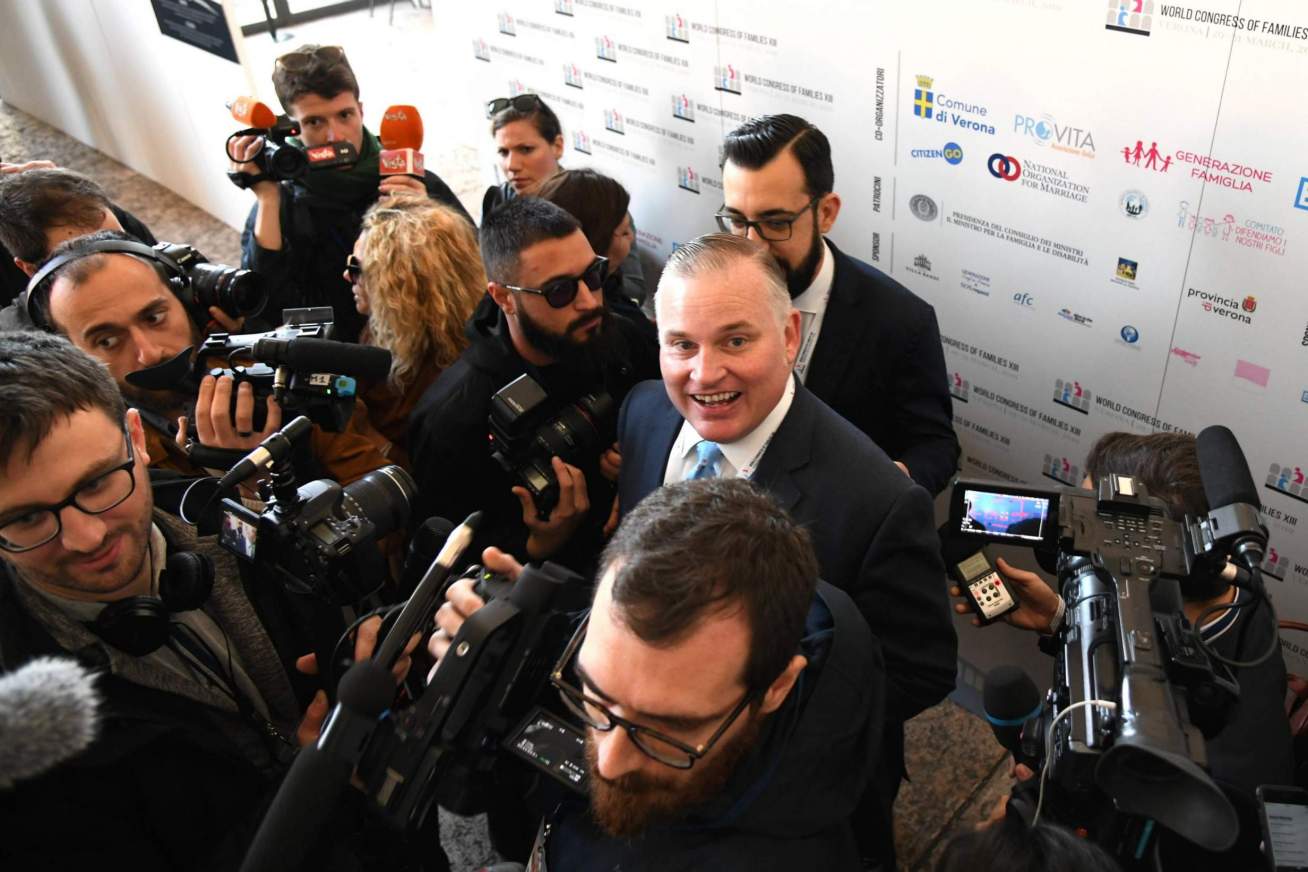 Russian anti-gender oligarchs have also been accused of funding far-right parties in Europe.

The most obvious, and public, example is Marine LePen’s Rassemblement National, currently on 17% in the polls. The Party’s electoral campaign literature included a photo of the far-right leader shaking hands with Putin, who she has since disavowed.

According to Mediapart, two Rassemblement National MEPs negotiated loans worth €11 million in which Konstatin Malofeev “played a role in unblocking the Russian loan obtained by Jean-Marie Le Pen, which financed the European election campaign (of 2014)”.

Russian money has also been linked to Italy’s far-right Lega Party, led by Matteo Salvini who in 2019 warned of a “demographic winter” in his country at the World Congress of Families. Salvini has positioned himself as against “gender ideology” and pro “family rights”, positioning reproductive and sexual rights as an attack on traditional Italy.

In 2018, La Lega negotiated “complex financial arrangements with Russian actors close to the Kremlin on an oil deal” that involved Russia’s state oil company Rosneft and Italy’s state-owned oil company Eni. The deal involved Rosneft selling discounted oil to Eni, with the discount then being provided to Lega as “a kickback”. The deal was worth €3 million and the money was used to fund Lega’s very successful 2019 European election campaign.

For Putin and Russia’s oligarchal, anti-gender leadership, issues around sexual and reproductive rights, including equal marriage and abortion, have all become possible weapons in their information wars. The ties between Russian money, US anti-gender campaigns, and European far-right parties have allowed for disinformation and division to flourish.

In the second part of this mini-series, Sian Norris will look at the influence of Aleksandr Dugin on Russian politics and Putin’s ideological platform.