The Byline Intelligence Team unearths an eighth event hosted at a Government department last Christmas, and reflects on where this leaves the Prime Minister

New evidence has emerged that suggests as many as eight London parties were attended by public servants – held by Downing Street and other Government departments – in the run-up to Christmas last year.

Adding to the party count, the Byline Intelligence Team understands that a hitherto unreported gathering was held at Skipton House – a building in London managed by the Department of Health and Social Care (DHSC) – between military personnel in the days before Christmas week 2020.

An eye-witness has reported a number of people attending this informal event, including military planners assisting the Government’s Vaccine Taskforce, along with other Ministry of Defence and civilian staff.

As many as 30 military personnel were located at Skipton House at the time, assisting in vaccine logistical efforts and the roll-out of personal protective equipment. Their commanding officer, Brigadier Phil Prosser, was head of 101 Logistic Brigade, though it is not known if he was present at the party.

It is understood that this was an unofficial gathering between military personnel, involving alcohol and pizza and, as far as is known, no NHS staff were involved.

On 9 December, when the gathering is believed to have taken place, experts were warning London needed to moved into the highest level of COVID-19 restrictions, tier 3. At the time it was still in Tier 2, which prohibited household mixing indoors.

A spokesperson from the Ministry of Defence told Byline Times: “We have been made aware of reports of a post-shift gathering of an MOD team working off-site, away from the department, in support of the NHS vaccination programme last year. The Chain of Command will be asked to investigate.”

A Plethora of Parties

The first allegation was of a party of 40-50 people that took place in 10 Downing Street on 18 December – at which Number 10’s director of communications, Jack Doyle, reportedly handed out awards to members of staff. The Prime Minister’s former spokesperson, Allegra Stratton, has resigned after being caught on video seemingly joking about the Christmas party. So far, she is the only person connected to the incidents who has lost their job. The Prime Minister said that he was “assured” no party had taken place.

By 18 December, the week of the party, London had been elevated to the highest level of COVID-19 restrictions, tier 3, meaning that people were only allowed to mix indoors with their household and members of their support bubble.

Another party is said to have taken place a month earlier, on 13 November 2020, first reported by the Daily Mail. Earlier that day, Boris Johnson’s political advisor Dominic Cummings had resigned, leading to what the Mail described as a “victory party” in 10 Downing Street led by the Prime Minister’s wife, Carrie Johnson. Cummings himself tweeted that “focus should be actual party in PM’s flat Fri 13/11 reported AT THE TIME but ignored by lobby!”

The Telegraph claims to have a list of attendees of the 13 November party. A spokesman for Carrie Johnson said: “This is total nonsense. Mrs Johnson has followed Coronavirus rules at all times and it is categorically untrue to suggest otherwise.”

The incident was raised by Labour MP Catherine West during Prime Minister’s Questions, when she asked Boris Johnson: “Will the Prime Minister tell the House whether there was a party in Downing Street on 13 November?” He replied “no”. He added: “I am sure that whatever happened, the guidance was followed and the rules were followed at all times.”

That same day, the Prime Minister gave a speech at a “leaving party” for his former spokesperson, Lee Cain. Questions are now being raised as to whether this event broke COVID-19 restrictions. 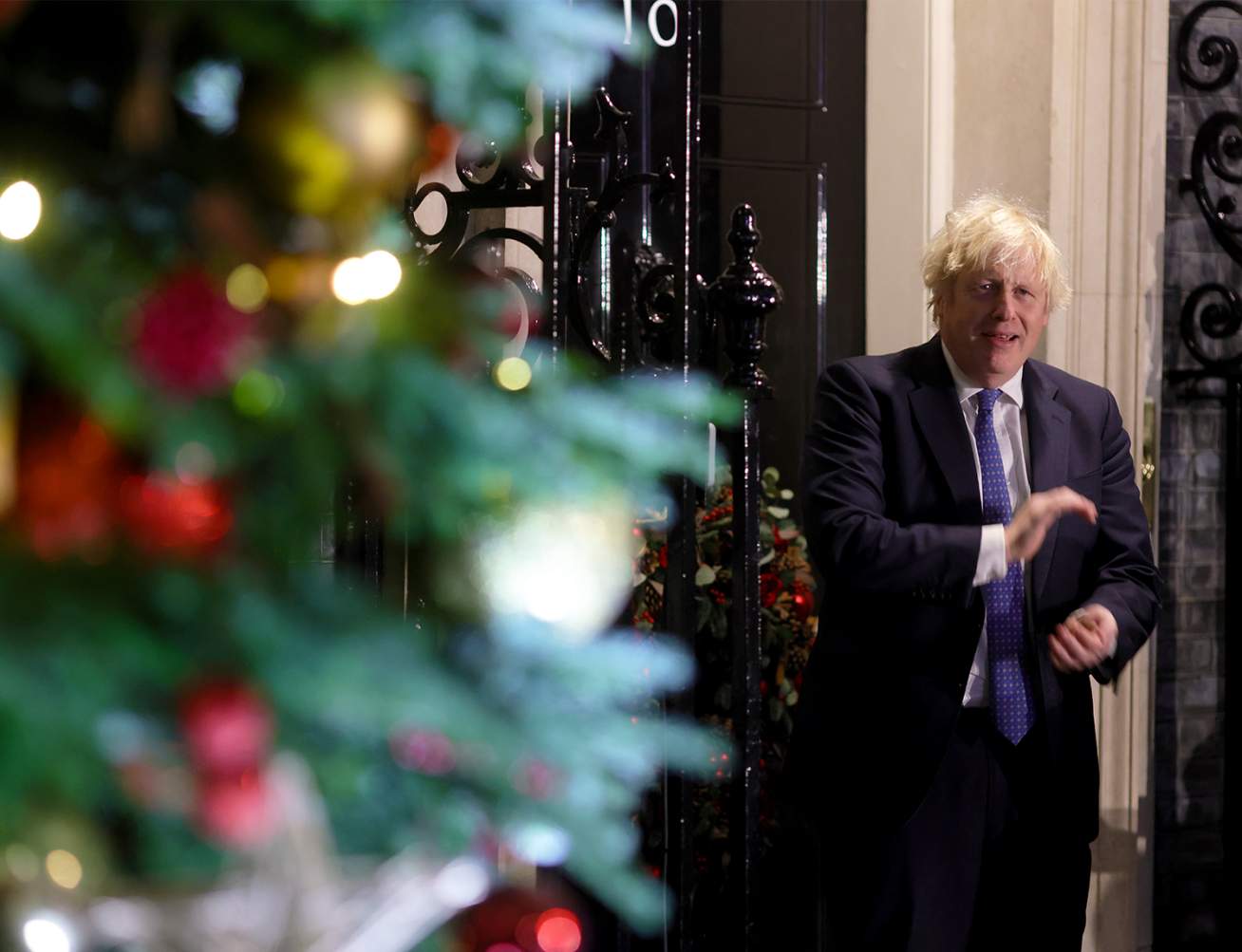 Another event was alleged to have taken place on 27 November – leaving drinks for another Downing Street advisor – this time when the Prime Minister was present. The incident is one of three parties being investigated by the Cabinet Office, alongside the 18 December party and a third gathering at the Department for Education on 10 December, hosted by then Education Secretary Gavin Williamson. According to reports in the Mirror, Williamson gave a speech before attendees “knocked back” glasses of wine.

Not covered by the investigation by the Cabinet Secretary is a “raucous” party that took place at Conservative Party headquarters organised by London Mayoral candidate Shaun Bailey’s campaign team. It is alleged that two dozen aides and volunteers wore Christmas hats, danced and drank – apparently damaging a door in the process. Staff were disciplined and Downing Street aides were said to have been among those present.

A final allegation relates to a Christmas quiz in December. It is believed that Johnson’s incoming chief-of-staff Dan Rosenfield took part.

Following this avalanche of stories, the Conservative Party has fallen to its worst poll rating in 11 months.

The Buck Stops at the Bottom

It is unknown whether Allegra Stratton’s resignation was forced or not, though it appears to conform with Johnson’s self-insulation strategy – to deny his personal involvement and to attach the blame to those directly involved.

On Wednesday, his spokesperson suggested that only the 18 December party would be the subject of a formal investigation by the Cabinet Secretary Simon Case – a party that was not attended by Johnson – before the scope was expanded to the 27 November and 10 December soirees.

The investigation will cover “the nature of the gatherings, including attendance, the setting and the purpose, and with reference to adherence to the guidance in place at the time”, Paymaster General Michael Ellis announced in the House of Commons on Thursday – saying that any evidence of criminal offences will be referred to the police.

However, this attaches blame to the staff involved, rather than to the senior figures who are responsible for the management and discipline of staff.

Johnson spoke to assembled staff members on 27 November, and was surely aware that his closest aides – and his spokesperson at the time – were taking part in “cheese and wine” celebrations while he was imposing lockdown restrictions on the rest of the nation. There seems to be little institutional appetite to question the Prime Minister’s role in sanctioning the parties, even if he did not personally take part in all of them.

As former Conservative MP and Attorney General Dominic Grieve told Byline TV: “Because there is no ethical leadership from the top, [it increases the] likelihood of these things happening further down the chain from people who say: ‘well it doesn’t matter what we do because the boss ultimately isn’t concerned about the rules’.

“So even if it were to turn out that the Prime Minister had nothing to do with this party, it might be worth him asking the question: why is it that my staff decide to break the rules? Well the answer I suggest is because he has condoned rule-breaking… Ultimately, he doesn’t really give a damn about this.”

While it is important to uncover the attendees of the parties – particularly in the case of journalists who have an unhealthily close relationship with those in power – the buck stops at the top. These jamborees happened under Johnson’s watch, and under his roof, making him the host of potentially criminal acts – and ones that actively undermined his Government’s own policies.

This is perhaps why a clear majority of people think that Johnson should now resign, according to exclusive polling by Omnisis for Byline Times, even before the conclusion of Case’s investigation. Resignation, however, is the only way that the Prime Minister can be removed from office without a Conservative leadership challenge – due to the nature of the British political system.

How many parties were held? Who attended the parties? Did they break any rules? These are all valid and necessary questions. But so is the question of leadership. Why did staff think that it was acceptable to party while the nation isolated? And what culture has Johnson created in Downing Street – and across Whitehall – that allows some politicians and public servants to believe that they can break the rules with impunity?