The dominance of Eton-educated men in public life is greater than it was a century ago – with Old Etonians running politics, the media, the Church, and the law

A public school’s motto reveals much about itself.

Rugby School, for instance, roots for a Protestant work ethos: “By praying, By working” (Orando Laborando). Winchester school goes for the aspirational: “Manners makyth man.” While Gordonstoun, Prince Charles’ former school, opts for the fridge-magnet quote of “More is in you!” (Plus est en vous).

For a school that has produced a staggering 20 prime ministers, it seems that such a sentiment serves it well. Self-interest, self-aggrandisement, and self-belief seem to be the hallmarks of this Berkshire school.

Its flourishing of late, though, has taken on an unseemly efflorescence. Rather than producing a crop of flowers of beauty, Eton College appears to have become almost pestilent in British public life. Today, almost every single pillar of British society boasts, at its head, an old Etonian.

Not only have ex-Etonians been at the helm for some of the most turbulent times in modern British history – including, of late, the current Prime Minister Boris Johnson, and former premier David Cameron – so too have other Old Etonians been in charge of the offices of state.

These include the Leader of the House of Commons and Lord President of the Council, Jacob Rees-Mogg; the Chief of the General Staff, General Sir Mark Carleton-Smith; the Archbishop of Canterbury, Justin Welby; the editor of Britain’s most influential paper – the Daily Mail, Geordie Greig; and a Justice of the Supreme Court, Lord Leggatt – while in 2020 another old Etonian Justice, Lord Robert Carnwath, retired.

The main pillars of the Leviathan – Parliament, Army, Church, Press and Law – all have an Old Etonian at the tiller. By default, they are of course all men. This is not to mention our king-in-waiting, Prince William and his brother, Prince Harry, who both attended the school.

It has not always been this way. 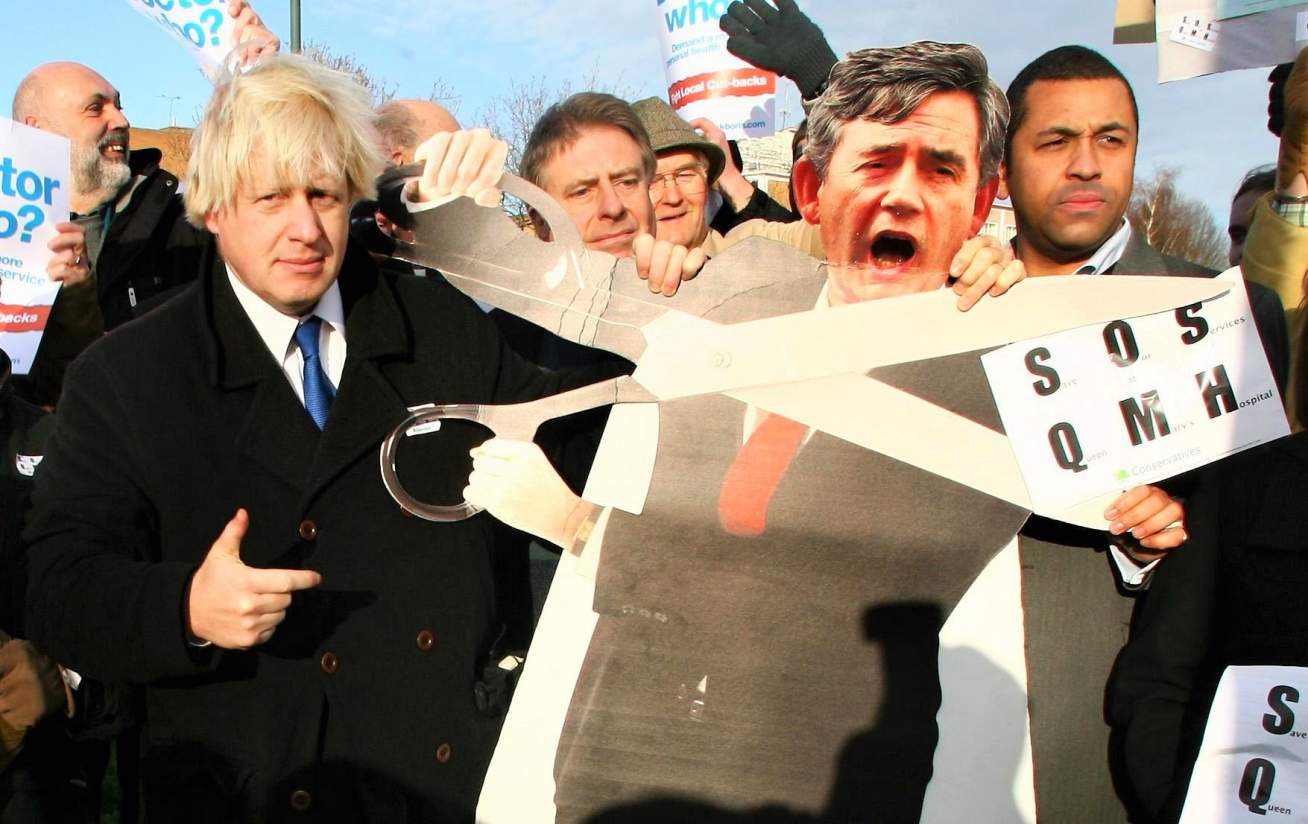 One hundred years ago, the landscape was far less singular in terms of educational origin. While all of the aforementioned posts were occupied by men, none of them had been to Eton.

At the beginning of 1921, David Lloyd George (who attended Llanystumdwy National School) was Prime Minister. The Leader of the House was Bonar Law (of the High School of Glasgow). The Chief of the General Staff was Sir Henry Wilson (educated at Marlborough College). The Archbishop of Canterbury was Randall Davidson (an alumni of Harrow School). The editor of the most influential British paper – arguably then The Times – was Henry Wickham Steed (who had been to Sudbury Grammar School). And the then Lord Chief Justice of England and Wales was Rufus Isaacs (a former University College School student).

Even the monarch, King George V, had been sent to sea and trained on HMS Britannia at Dartmouth, later on HMS Bacchante.

It has been said that the apotheosis of Eton’s influence was in the late 1950s and early 1960s, when Etonian-educated Harold Macmillan and Sir Alex Douglas-Home were prime ministers. A joke did the rounds that a sign could be hung on Eton’s gates saying “Cabinet Makers to Her Majesty the Queen”.

But today’s crop of Old Etonians seem not just to dominate political power, but other central pillars of the state as well.

If you took the roles of Prime Minister, Leader of the House, Chief of the General Staff, the Archbishop of Canterbury, and the editor of the Daily Mail (State, Army, Church and Press) as a guide, the current situation is exceptional in British public life in the past 100 years.

Such posts were rarely filled by Old Etonians in the 20th Century. This accelerated under David Cameron to peak in the current day.

It is not just the tops of the pillars of state where Old Etonians reside.

Research by The Citizens has shown that, of the 644 Members of the House of Lords whose schooling was a matter of public record, 61 went to Eton – almost 10%.

Such a dominance of Old Etonians is not only in contrast to state-educated members of the Lords (244 or 38% of the house), but is even in contrast to other ‘leading’ ex-public schoolboys in the Lords.

In comparison, 12 members of the upper house went to Harrow; 10 to Rugby; nine to Winchester; seven to Ampleforth, Wellington and Westminster; six to Haileybury and St Paul’s (Boys); and five to Marlborough.

Privately-educated members of the House of Lords are five times more likely to have been educated at Eton College than the next leading public school, Harrow.

Eton is connected to the House of Lords in indirect ways, too.

Baroness Kate Rock is married to Etonian Caspar Rock of the wealth management company Cazenove Capital, part of the multinational Schroders Group. They reportedly lent their luxury Klosters ski home to former Chancellor George Osborne, and were said to be friends of David Cameron at Oxford. Meanwhile, Baroness Jo Valentine is also married to Eton-educated venture-capitalist Simon Acland, son of the former Ambassador to Washington.

The tendrils of Eton’s political influence do not just stop at the top.

Cambridge Analytica was the now defunct political consulting firm that sat at the heart of a data scandal whereby personal data belonging to millions of Facebook users was collected without their consent, predominantly to be used for political advertising. It was started as a subsidiary of the private intelligence company SCL Group by Nigel Oakes, Alexander Nix and Alexander Oakes. All three men went to Eton.

Perhaps this is not surprising. Etonians’ self-belief is remarkable. They fielded some 208 pupils for Oxbridge in 2020 out of a school year consisting of about 1,300 young men – meaning that roughly one in six (69) got a place. Admittedly, the number of Oxbridge offers has dropped from 99 in 2014 to 48 in 2021 – but one school is still sending four-dozen pupils to the ‘best’ universities in the UK.

Of course, there are some who argue that there is nothing wrong with having an ‘elite’ school producing future leaders. After all, the school prides itself on the fact that 37 Old Etonians have been awarded the Victoria Cross – the largest number to alumni of any school. There are also the slew of household names that dominate the small and big screen, including actors Tom Hiddleston, Hugh Laurie, Damian Lewis, Dominic West, and Eddie Redmayne. And it was recently reported that, for the first time in nearly three decades, Eton failed to produce any medal winners at the Tokyo Olympics for Team GB.

Time and time again, however, Old Etonians in public life have been shown not to demonstrate the heroic or sporting ethics of some of their fellow pupils, from the scandals surrounding David Cameron’s lobbying of Parliament, to the accusations of cronyism, nepotism and malfeasance that stalk Boris Johnson.

When Johnson was asked in 2006 in a documentary called School Days whether he was ever embarrassed about going to Eton, he first tried to side-step the question, even stressing that he was “state-educated” and “the beneficiary of a scholarship endowed by Henry VI”. He also hyperbolically described Pop, the Eton society reserved for elite prefects of which he was a member, as “a self-electing elite of almost sickening pomposity and arrogance with a belligerent disregard for the rest of humanity”.

But what was most telling was when he described elitism. It was, he said, “a concept that a school like Eton tries to associate itself with”. And here he was clear: “I am not against elitism… the issue is how do you make that elite porous. The trick is to liberate people so it’s not just one school, like Eton.”

It seems, though, that under Boris Johnson those at the top of the elites of British public life have become less porous than ever before.