A scientist with links to the co-founders of the ‘herd immunity’ Great Barrington Declaration has quietly secured funding from the World Health Organization (WHO) to produce a bizarre paper denying evidence that COVID-19 is airborne, Byline Times can exclusively reveal. Several members of the WHO committee which commissioned the paper appear to have benefited from the contract by showing up as co-authors of the very paper they contracted out without declaring the potential conflict of interest.

Conflicts of Interest: WHO is Paying Who?

The key author of the new paper, which has already failed peer review, is Carl Heneghan, Professor of Evidence-Based Medicine at Oxford University.

On 24 March, Heneghan released a pre-print purporting to offer a ‘systematic review’ of the role of airborne transmission in COVID-19 which was “commissioned and paid for by the World Health Organization (WHO).” The paper concludes that there is insufficient evidence to reach “firm conclusions over airborne transmission”, a finding at odds with the wider scientific community. This conclusion is largely justified by a lack of COVID-19 virus samples from the air, although many other confirmed airborne viruses lack such evidence.

Although the paper contains the caveat that “funders had no role in study design, data collection and analysis, decision to publish, or preparation of the manuscript,” several co-authors of the paper alongside Heneghan are members of the WHO Infection Prevention and Control Research and Development Expert Group for COVID-19 (IPCRDEG-C19), which advises the WHO on how it should commission external research.

This includes Professor John Conly, Chair of the WHO expert group, and Professor Tom Jefferson. Although Jefferson’s interest in WHO is declared in the paper, Conly’s is not. Conly is also a member of the WHO Health Emergencies Programme (WHE) Ad-hoc COVID-19 IPC Guidance Development Group.

A senior scientist familiar with WHO’s processes who spoke to Byline Times on condition of anonymity described the arrangement as a form of “cronyism” in which: “The apparent ‘external’ ‘independent’ reviews are just this internal bunch paying themselves for looking at the literature through the narrow, ‘medical’ lens and overlooking all the key methodologies for building the evidence base on airborne.”

The deeper problem is that the main beneficiary of the WHO contract is linked to COVID-19 disinformation networks whose recommendations have been criticised by the WHO.

All three of Heneghan’s colleagues are founders and named authors of the Great Barrington Declaration (GBD), a pseudoscientific document whose proposed strategy of letting the virus run has been widely criticised by public health scientists. As Byline Times has previously revealed, the GBD was sponsored by a right-wing libertarian think tank plugged into the Koch-backed climate science denial network, with a history of spreading misinformation on behalf of private health and tobacco lobbies. Most of the GBD’s supposed medical scientific signatories are unverified and unvetted.

Collateral Global is founded and directed by Sunetra Gupta and her partner Alexander Caccia, a UK Ministry of Defence contractor with ties to Canadian government fossil fuel investments, who had secretly drafted the GBD document. He had also secured PR support for Gupta’s claims about herd immunity from an agency linked to the Cabinet Office ‘Nudge Unit’. OpenDemocracy has now revealed that Gupta personally received funding for her discredited research on herd immunity from a Tory billionaire.

A month before the GBD was published, Heneghan co-authored a controversial letter to Prime Minister Boris Johnson calling for an end to lockdowns and the switch to a so-called ‘focused protection’ strategy. The letter was described as a “thinly veiled return to a herd immunity strategy” by Dr Stephen Griffin, Associate Professor in the School of Medicine, University of Leeds.

Heneghan’s other co-authors included Sunetra Gupta; Professor Karol Sikora, who has a reported history of lobbying against the NHS on behalf of Conservative and Republican party pressure groups; and Sam Williams, a long-time consultant to the Government’s Treasury department who had published a pseudoscientific paper which appeared to misrepresent the COVID-19 death toll.

WHO contractors Heneghan and Jefferson have previously been accused of promoting anti-mask misinformation. In November 2020, they co-wrote an article in The Spectator claiming that a Danish randomised-control trial proved that “wearing masks in the community does not significantly reduce the rates of infection.”

As Sonia Sodha in The Guardian observed, Heneghan and Jefferson made “two serious scientific errors… based on a misrepresentation of a Danish randomised-control trial.” The study only considered the impact on the mask-wearer, not on others, which is why its authors made clear that their study would not justify conclusions about the impact of mask-wearing on reducing community transmission.

“Second, implicit in Heneghan’s piece is the erroneous assumption that there is some abstract hierarchy when it comes to scientific evidence: a randomised trial is always more robust than an observational study. But a randomised trial is only as useful as its design; this particular one was not even set up to answer Heneghan’s question,” Sodha observed.

The WHO’s commissioning of a scientist linked to the Great Barrington Declaration is an unexpected development given the body’s outspoken criticisms of a ‘herd immunity’ strategy.

“Airborne transmission of respiratory viruses is difficult to demonstrate directly”, they point out. “Mixed findings from studies that seek to detect viable pathogen in air are therefore insufficient grounds for concluding that a pathogen is not airborne if the totality of scientific evidence indicates otherwise. Decades of painstaking research, which did not include capturing live pathogens in the air, showed that diseases once considered to be spread by droplets [such as measles or tuberculosis] are airborne.”

In other words, Heneghan’s flawed methodology is inherently designed to exclude evidence of airborne transmission that doesn’t involve successfully sampling COVID-19 from the air.

The new Lancet article refers to a wide range of peer-reviewed studies in the scientific literature showing that: “Detailed analyses of human behaviours and interactions, room sizes, ventilation, and other variables in choir concerts, cruise ships, slaughterhouses, care homes, and correctional facilities, among other settings, have shown patterns… consistent with airborne spread of SARS-CoV-2 that cannot be adequately explained by droplets or fomites. The high incidence of such events strongly suggests the dominance of aerosol transmission.”

The Lancet article thus reflects an emerging consensus across the scientific literature. As an April editorial in the British Medical Journal explains: “It is now clear that SARS-CoV-2 transmits mostly between people at close range through inhalation… So governments and health leaders should heed the science and focus their efforts on airborne transmission.”

Byline Times contacted the WHO multiple times to ask why the body is working with a scientist linked to the Great Barrington Declaration to promote potential misinformation about COVID-19 transmission, but received no reply.

Carl Heneghan, John Conly and Tom Jefferson did not respond to requests for comment.

Revd Joe Haward, 30 April 2021
Reverend Joe Haward explores what is motivating anti-lockdown protestors and how the elderly and those with underlying health conditions are their ultimate targets 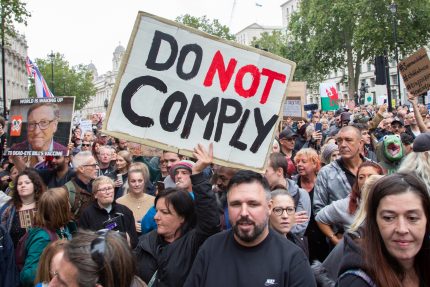