Few nations have been more deeply bruised over the previous year than Lebanon. The county started the Coronavirus pandemic in the grips of an economic crisis that led to a serious devaluation of its currency alongside rising unemployment.

Since day one, young healthcare workers have been on the frontlines of Lebanon’s myriad economic, political, and social crises.

Now, as the country emerges from one of the world’s strictest lockdowns, Byline Times can share the voices of four young frontline workers who have been fighting COVID-19 since the outbreak began. These are in their own words and have been edited for clarity.

They speak up following a huge surge of COVID-19 that followed the country reopening for last year’s festive season with almost no restrictions. The wave of infections led to the the authorities enforcing a stay-at-home message and a 24/7 curfew.

The lockdown led to violence protests in both Beirut and Tripoli. Yet some hope has arrived in the form of the country’s first batch of 28,500 COVID-19 vaccine shots. With the most vulnerable citizens receiving their first vaccinations, Lebanon’s Government now hopes for a slow return to normality.

“I work at a highly respected hospital, possibly the best in Lebanon, but even I was shocked by what I have seen. We reached a point where we are waiting for patients to die so that others can free up their beds. In one three-day period, six people here died.

We were so overwhelmed by the chaos and the sickness. At the end of my first shift, I was so physically and emotionally exhausted that I simply broke down in tears. I felt ashamed at first, but a few of the other nurses pulled me over and comforted me. ‘Aya’ they said, ‘if you’re not crying on your first day here, you are doing something wrong!’

We try a lot of different techniques and medication. That alone is stressful because the patient would ask what we are going to do to them. Some patients would get better and some patients would not. If you are older it will be harder to get better. I hate that I have no answer to that when a patient will ask me if they will get better, because it is so hard to tell.

One instance was heartbreaking. We had two sisters who were patients. They were both in their fifties, and they had pre-existing conditions. Both were in a critical state. I put one of them in a wheelchair and took her to her sister’s room. They were both on oxygen masks and for a while they just sat there and held hands. They could not speak, so instead we gave them each a card and a pen so they could write each other letters to say goodbye. The next day one of them passed away, and the other one ended up surviving. We don’t know why.

While I would not want to go through these experiences again, it has helped me and matured me a lot. I work on a paediatric ward. Because of the economic crisis, we had to lay off hundreds of staff, while others were forced to relocate to the COVID-19 unit.

I wanted to go and learn and see how things were. I had only been exposed to pediatric patients.

But I was completely shocked by the things and I saw. It was not what I have been studying for three years about nursing about caring and compassion. It was such a big shift for me. Obviously, the floor is always full of staff and patients.

I cannot say that I am for or against the protests because we can never really put ourselves in other people’s shoes and understand what they are going through.

I will say that the lockdown is implemented for the safety of others to try and prevent the spread of the disease. Our days here in the emergency department are so crazy and hectic. But the vaccines arrived in Lebanon yesterday and today my hospital opened as a vaccination center. We vaccinated about 400 people today from doctors and nurses to housekeeping, security personnel. It was mostly critical floor staff who got priority, but it was such a smooth process and I have many hopes that we can vaccinate everyone soon.”

Hilal: ‘Dealing with patients during the pandemic has been a very emotional experience’

“Dealing with patients during the pandemic has been a very emotional experience. It is a scary situation to be with so many people on what their deathbed could be, and we never know whether they will pull through or not.

I stayed with one of my patients, who was a young man- he was in his 30s, although he was obese, which we know is a serious comorbidity. He was deeply depressed and kept telling me how despite his successful business career, he was regretting his whole life, and how the only thing he wanted to do was to be able to spend more time with his young family. I am glad to say he pulled through, although many others did not.”

I understand the opposition to the lockdown. People got hungry. Many of them lost their jobs and their only source of income. For some it was everything they have. It’s only normal for them to protest.

But the lockdown has been effective, we can see the numbers dropping. Cases are decreasing. We knew the benefits of the lockdown could be huge, but the repercussions could be huge as well. It was really a double-edged sword. I myself was injured by the blast at Beirut port. But like many people here, I had to just shrug it off and keep working. We have all had to make sacrifices. 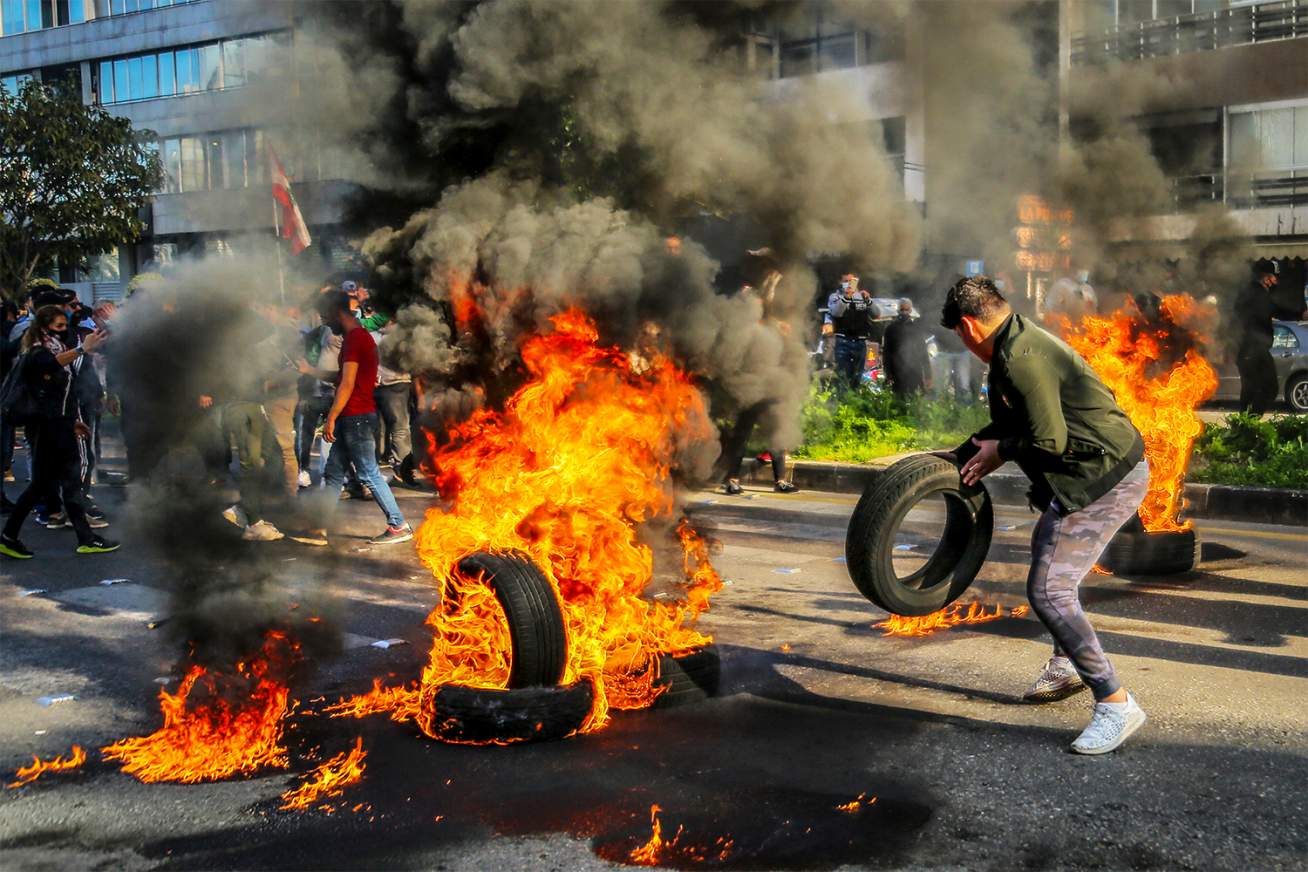 Still Reeling After the Beirut Explosion Lebanon Is At Breaking Point

The Christmas period is very important in Lebanon. They wanted to give the economy a shot in the arm and a chance to restart after everything that has happened this year.

Unfortunately, it meant that after New Year’s Eve, infection rates were able to increase tremendously. Very soon we went from having a patient die every two weeks to dying every two days. One of the problems is that we have confused people about the danger of the pandemic by having these on and off lockdowns. Our curfew over the holidays was between 3am-5am. This was a joke that didn’t do anything. If we are told that the lockdown is lifted, even I would not just stay at home, I would want to go out and meet people, although of course I would be taking precautions. We swing from completely open to completely shut.

Of course, our Government is chaotic, and it is bankrupt, so they can’t do anything like a furlough scheme that has been done in Germany or the United Kingdom. It isn’t a party-political thing however. It is a problem with all parts of our Government system.”

“I have been working in a COVID ward for nearly a year now, since last February.

At first, we only had suspected cases, but it quickly grew more and more dangerous.

We came across strange symptoms that were unlike any virus we had dealt with before. These included bacterial pneumonia and even sepsis. It is a difficult and dangerous disease.

Most of us have simply stopped seeing our families, so that we do not put them at risk. For some of us who live with our families, this has been extremely difficult.

The Government provides very little support for those who need to live independently. Some is provided by our hospitals, and others are provided by local NGOs, who help us find accommodation away from our loved ones.

This recent surge has been caused by people partying during the holiday season. Just two weeks later, we saw a huge spike in cases. I think everyone now agrees that the Government’s decision to open up so quickly was a mistake, to say the least. Few would say the authorities have done a good job.

I can understand why people find this lockdown so harsh. The difficult thing is that it did not have to happen. If we hadn’t opened up so recklessly, we wouldn’t have to implement something so forceful now. Even then it was mismanaged. As soon as they announced that supermarkets would be closing, people started crowding into them to panic buy, potentially spreading the virus even more.

One of the hardest things has been seeing the effects on families who come in at the same time. Often the disease will just rip through multiple generations.

An awful thing we have found is that if the younger members of the family succumb, we will usually lose the older ones as well.

They seem to just give up hope completely. They lose the will to live. It’s not our decision whether to tell them or not, we leave that up to their other family members.”