Viktor Orbán’s latest attacks on the LGBTIQ community are part of a much wider populist assault on women and minority groups, reports Sian Norris

“I don’t know if we dare to hope,” says Luca Dudits, communications officer at the LGBTIQ-rights organisation the Háttér Society. “If we have another five years of a Fidesz Government, I don’t have much hope for human rights.”

Over the past year, the attacks against the LGBTIQ community in Hungary by the authoritarian, far-right Government led by Viktor Orbán have intensified.

Earlier this month, the attack extended to the printed page, with the Government ordering a publisher to print disclaimers on books containing “behaviour inconsistent with traditional gender roles”. As one journalist wryly pointed out on Twitter, does this mean health warnings appearing on Thomas Mann novels?

The move was a response to the publication of a children’s book called Wonderland Is For Everyone by a lesbian activist group. Orbán, the Prime Minister, condemned the publication, saying that there was a “red line” the “homosexuals must not cross” and that the LGBTIQ community “must leave our children alone”. One far-right politician publicly shredded a copy of the book.

But attacking books for challenging gender norms is part of a much wider assault on equality and freedoms in Orbán’s increasingly authoritarian Hungary. 2020 “really upped the ante in the Government’s crusade against the LGBTIQ community,” according to Dudits.

Last spring, Hungary banned legal recognition of gender identity, putting transgender people at risk of state-sanctioned discrimination. At the same time, the nation’s Constitution was updated to state that a child’s biological sex must be respected. This was followed by a ban on same-sex couples adopting children – what Dudits calls an “obvious attack on rainbow families and the formation of rainbow families”.

“Now the Constitution also includes a line that says the father is a man and the mother is a woman,” Dudits added. “Which is nonsensical if you ask us. No one has ever debated this fact. We’re only saying a child doesn’t need a mother and a father to be raised in a family.”

A Rising Tide of Hate

Hungary is a “a country where legal gender recognition is outlawed, where you can’t obtain documents that reflect the gender you are trying to live as, that puts trans and intersex people at risk of harassment and discrimination in every setting,” Dudits explains.

The assaults on LGBTIQ people’s legal rights is taking an emotional toll on the community and there is concern about the mental health impact of the roll-back of rights on young LGBTIQ people who “might be more at risk with these new constitutional amendments. It also really stigmatises rainbow families – not just the parents but also the children who will grow up in rainbow families. So there is the mental pressure”.

The legislative attacks also legitimise and normalise violence and abuse beyond the Parliament’s walls.

It is difficult to ascertain the levels of homophobic and transphobic hate crime in Hungary as, according to Háttér’s research, it is serially under-reported. It estimates that only 10% of hate crimes are reported, with victims fearing secondary victimisation and police retaliation. The organisation believes that more and more LGBTIQ people are experiencing hate crime as the Government repeatedly scapegoats the community.

“According to anecdotal evidence and the stories we hear on our counselling hotline and our legal aid service, we do think hate crimes have increased in Hungary since the beginning of 2020,” Dudits says.

The Hungarian Government’s attacks on the LGBTIQ community are part of a much wider populist assault on women and minority groups that has escalated as Orbán’s Fidesz Party moves further and further to the right.

The degradation of human rights in the country was thrown into the spotlight during 2015’s so-called migrant crisis. Orbán refused to take part in the European Union’s 2015 Refugee Resettlement Programme and attracted international censure for his regime’s often aggressive and brutal treatment of those crossing the border into the country.

In more recent years, he has criminalised NGOs for helping asylum seekers and, in 2020, used the Coronavirus as a cover to suspend asylum rights.

“We don’t see these people as Muslim refugees,” Orbán told the German newspaper Bild. “We see them as Muslim invaders.”

“The LGBTIQ community is not the first minority they have picked on,” Dudits agrees. “They have been attacking Roma people, migrants and refugees, and demonising the homeless. They are trying to push back against abortion, saying women’s place is in the kitchen. Recently they said the world belongs to whoever brings enough children into it, as if women are just walking uteruses.”

Both immigration and LGBTIQ rights are positioned as an attack from outside forces — values being imposed on Hungary by Western liberal elites and the EU. The pincer threat of gender and migration, Orbán claims, must be defeated to maintain a “Christian Hungary in a Christian Europe”.

The focus by Orbán on the traditional, white Christian family is epitomised by his Government’s Family Protection Programme, which incentivises heterosexual married women to have more children.

The programme excludes LGBTIQ and Roma families and is accompanied with anti-immigration, anti-abortion rhetoric. In a 2019 speech, Orbán spoke of how the policy offers the solution to the “possible extinction” of white Hungary by incentivising parenthood – to “ensure that those who decide to have children are guaranteed better living standards than if they decided not to have children”. 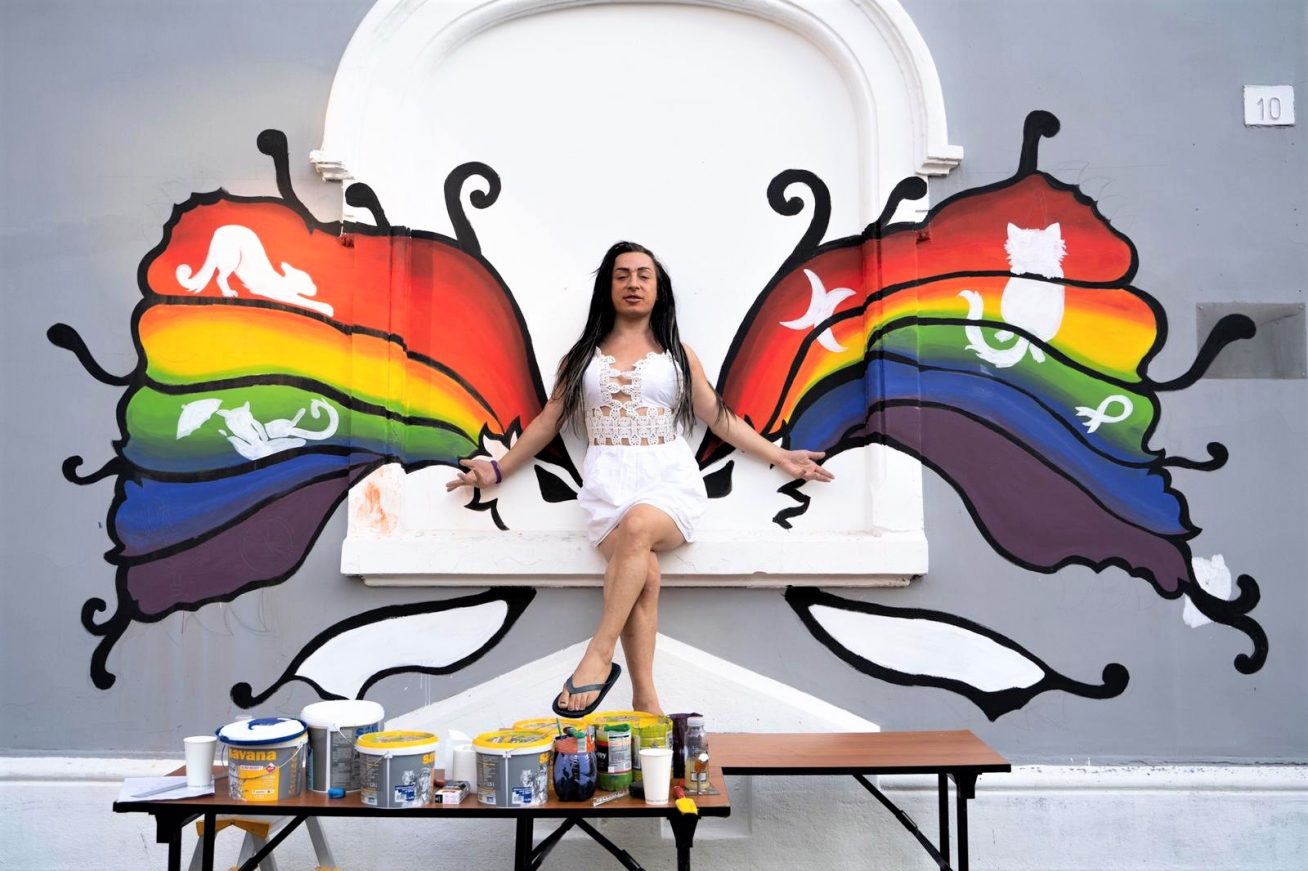 The Latest Battle for the Futureof Romania’s LGBTIQ Community

Although Orbán’s attacks on NGOs such as Háttér have drawn censure from the European Union, many far-right and right-wing activists, commentators and politicians have praised the regime’s ‘pro-family’ policies.

Spectator writer Douglas Murray joined far-right activist and former Donald Trump strategist Steve Bannon at an event with Viktor Orbán in 2018 – both had one-to-one meetings with the Prime Minister at The Future of Europe. Orbán is apparently a fan of Murray’s writings, while Bannon planned to work with Hungary’s Government in the run-up to the 2019 European Elections. That year, Orbán stated that his ambition was to “re-Christianise Europe”.

Tim Montgomerie, once described as the most influential Conservative outside Parliament, also wrote a tweet praising the Family Protection Programme as “worthy of close study”.

In the US, Trump-supporting politicians followed Bannon’s lead with their praise for Hungary’s assault on human rights. Joe Grogan, an assistant to President Trump and director of the Domestic Policy Council, lauded Hungary’s “courage and creativity” for its family policies and said that the US was “inspired”. Trump officials also praised what Orbán calls his “procreation, not immigration” approach.

At the most extremist edge, far-right Generation Identity activist Tore Rasmussen boasted that “the only place I go for vacation is Hungary these days. Because I only give money to free nations”.

A Note of Hope

“The worst part is we feel kind of helpless,” Dudits says. But there is hope, not least in the way in which the LGBTIQ community is organising.

“Something that is really lovely about the Hungarian LGBTIQ community is that organisations are standing in total unity,” she says. “There is no divide, no competitiveness, we work together, we collaborate.”

This was evident in the response to the ban on legal gender recognition, when Dudits says “there was huge support from people.”

The ban on legal gender recognition and same-sex couples adopting did have an unintended consequence for Hungary’s anti-LGBTIQ regime too – increased visibility of the very community which it is trying to undermine. As activists rallied to oppose both bans, more and more LGBTIQ people started speaking up.

“After the bill was proposed, a lot of trans people came out to give interviews,” Dudits explains. “In November, when the ban on adoption was proposed, we launched a campaign that received a huge amount of support on social media and in commercial TV as well.”

Now all hopes are pinned on next year’s elections which present an opportunity to vote Fidesz out. “In terms of human rights,” Dudits says, “the biggest hope we have is a new Government.”