There is a humanitarian crisis in a small but prominent corner of Europe and our eyes are blinded to it.

Hundreds of desperate people are simply trying to survive this grim Winter. Among them are young men in flip flops, thrown out of their flimsy tents in dawn raids by the police, beaten and attacked with rubber bullets and tear gas, left with nothing but the clothes they are standing in.

Cold, wet, hungry and scared, these people are ignored, driven to the margins of society. Yet their plight is of our making – they are just a 35-minute train journey from our coastline, in Calais, and the harsh treatment they receive is jointly funded by our own Government.

I went to Calais almost three weeks ago – before the UK was cut off from the rest of the world – to see for myself the plight of the estimated 1,000 asylum seekers currently sleeping rough in the area. Volunteering with the Care4Calais charity for refugees, I was overwhelmed by the good grace of the individuals it helps, and was left in awe at the courage and resilience the people have despite the horror of their daily lives.

The official line is that there are no camps in northern France. ‘The Jungle’, which at its peak provided a place to live for around 10,000 asylum seekers, was destroyed in 2016. In the effort to fell the camp, woodlands were chopped down and mile upon mile of steel fencing and barbed wire now carves its way across the Normandy landscape. Many simply headed to Paris, Lille and Brussels, as new, unofficial camps emerged.

In Calais, and along the coast to Dunkirk, hundreds of desperate refugees remain, and new ones continue to arrive, despite the hostile response of local authorities.

At a site nicknamed BMX – due to its location beside a bike park – live around 180 Eritrean refugees. I was taken aback when first visiting the site at the care with which the asylum seekers looked after themselves, despite their dismal living conditions.

We gave them food to coo and provided them with the opportunity to charge their phones – their only means of contact with families thousands of miles away. We brought a large speaker so they could play music, gave them tea, coffee and biscuits, alongside clippers and scissors so that they could cut their hair. As they trimmed away, played football and volleyball, enjoyed card games, Jenga, and Connect Four, I got to know something of their lives.

All the time, we were watched by two intimidating van-loads of the French national police, the Compagnies Républicaines de Sécurité (CRS).

The week before, there had been a particularly brutal raid by the CRS at this site. They destroyed the asylum seekers’ belongings, slashed tents and removed sleeping bags. The officers even deployed several tear gas canisters and rubber bullets. One young man, running from the CRS and blinded by the gas, lurched into the road and was hit by a car. He died later in hospital. A second young man was hit in the face by a rubber bullet. He remains in hospital at the time of writing, in a serious condition.

In the shadow of the CRS, I laughed with these resilient young men as they revelled in the brief respite from their persecution. These refugees, mainly young men escaping the brutalities of conscription back in Eritrea, were remarkably respectful, polite and caring, inundating us with gratitude for the small help we could give. As we prepared to leave, I watched as they started to drift back to their small fires, lean-to tarpaulins, and leaky tents – their remaining shelter following the latest eviction by the CRS.

That night, the temperature dropped and I cried for the first time as I sat in my warm flat, writing up my notes. 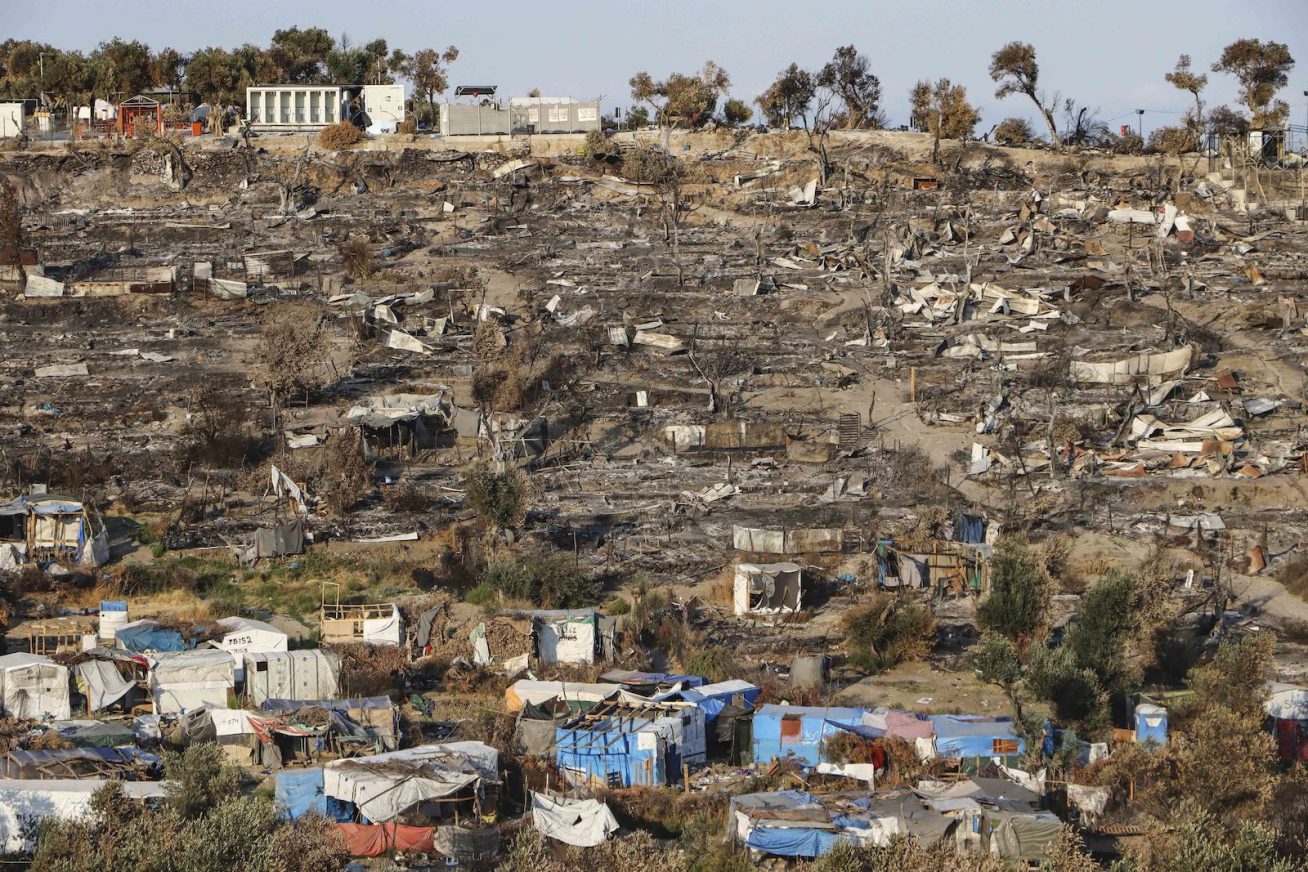 Visiting Dunkirk was grim. It had rained all night and a freezing wind lashed in from the Channel. I found myself talking to a British nurse volunteering in the area for a few months and asked her to describe the most common issues she faces. “In Dunkirk, we deal with a lot of trench foot,” she said. “They simply can’t get dry.”

As I stood in my many layers of warmth, guarded by a face mask, giving out biscuits to accompany comforting cups of tea, I was approached by Ali – a man who had no coat, dressed in a pair of long johns, without any trousers. That morning there had been another eviction. The CRS, heavily armed and in large numbers, drove through the site, pulling asylum seekers from their tents. Ali awoke to the noise and managed to grab his boots on the way out. They were all he had left, aside from the clothes on his body. His few belongings, the small tent and sleeping bag, a few items for cooking, and of course, his trousers, were all taken or destroyed.

He told me that he was simply grateful to have both of his shoes. In past evictions, the CRS have taken single shoes from refugees – a particularly senseless and vindictive form of abuse.

The Calais refugees aren’t just being denied these simple needs, their human rights are being actively stripped from them.

The CRS is on the frontline. The policy is to import officers from across France and require them to serve for just two weeks at a time. The thinking behind this is that, if the tours of CRS officers go on for any longer, they will start to humanise the refugees – to have feel empathy towards them. The system is therefore designed to dehumanise asylum seekers, taking away their most basic rights.

Majid, 43, is from Iraq. He speaks excellent English and was a translator for the US and UK military forces. As a result of his work, he was forced to flee the country after his family was targeted by militants. He made it to the UK and managed to make a new life, getting married and having a daughter. Not long after he separated from his wife, the UK Government decided it was safe for him to go home and he was deported to Iraq.

Majid went back to working as an interpreter, only to be targeted once again.

He had been sleeping in a leaky old tent in Calais for more than four months and knew that his only option was to attempt to cross the Channel by boat, despite the letters from the UK and US forces testifying to his status as a refugee. As he spoke of the crossing, his voice started to break. Majid is a big man, but he was scared.

The UK is not innocent in this matter – in fact, it is a central cause of this crisis.

Britain takes just 5% of refugees seeking a safe haven in Europe – a small percentage compared to other large, developed states. Home Secretary Priti Patel harangues asylum seekers crossing the Channel by boat, branding them “illegal”, but there are currently no so-called legal routes open to them.

The UK closed its doors to refugees at the beginning of the Coronavirus pandemic and has even announced further increases in financial support for the security efforts of the French Government – namely, the work of the CRS. The UK has created a system whereby the only option is to stowaway on a lorry or to risk the death-defying journey in a dinghy.

It doesn’t have to be like this. Britain could choose to work with France to create safe, comfortable places for asylum seekers to stay, free from violence and senseless evictions. If we don’t want people to be smuggled into the country, the Government could provide legal, legitimate ways for people to seek asylum.

A basic initial assessment, on the French side of the Channel, could identify those with genuine asylum cases, destroying the opportunity for illegal trafficking in one fell swoop. But the UK Government shows no appetite to resolve these issues.

Just a few months ago, the CRS corralled a group of asylum seekers before loading them onto buses, with only the clothes that they happened to be wearing at the time. The buses headed south, into the night. The asylum seekers had no idea where they were going. These people had fled some of the most dangerous places in the world, commonly former British colonies, with the intention of making it to the UK. Disoriented and scared, they were bused all the way through France, to the Pyrenees, and dumped on the border with Spain.

Some of them realised what was happening and, on a couple of buses, pretended to fight amongst themselves, causing the bus to pull over and giving them a chance to escape.

One of the volunteer leaders at Care4Calais received a call telling him of their plight. He spent the rest of the night driving around a cold and wet Normandy trying to find small groups of escaped asylum seekers to bring them to some kind of safety. When they got back to their tents, there was nothing there. The CRS had taken everything.

These people are treated like human cattle. In fact, if cattle were treated in this manner, there would probably be uproar – on both sides of the Channel.