When Prime Minister Boris Johnson recently announced the biggest boost the UK’s defence budget since the start of the Cold War, he promised billions would be invested in technologies that will “revolutionise warfare”. He talked of the need to improve Britain’s conventional warfare capabilities with new submarines, warships and teams working in cyberspace. What he kept vague was the Government’s ambitions in space.

The new defence budget – announced on 19 November – will boost funding by £16.5 billion, potentially at the expense of the Britain’s foreign aid, and while it remains unclear exactly how the money will be split, it is known that some will go towards building an “RAF Space Command” in Scotland.

The Ministry of Defence (MOD) told the defence news outlet Janes that this Space Command will “work alongside MOD’s recently formed Space Directorate as a joint command structure” adding that the “space domain” will be “critical” if the UK wants to remain as a “leading 21st Century power”. Downing Street has not said exactly where in Scotland Space Command will be built, but promised it would be operational as early as next year and capable of launching its first rocket by 2022.

The decision to expand the UK’s commitment to space is being driven by Defence Secretary Ben Wallace who recently spoke at a virtual conference called Defence Space 2020. Wallace explained the Government “now recognised space as an operational domain” not only because of its importance in communications and navigation but because “our adversaries are increasingly seeking to weaponise space”. He specifically highlighted “Russia’s aggression in space”, appearing to allude to US claims that the Kremlin had tested an anti-satellite weapon in July.

In the wake of that alleged test, Wallace wrote in the Sunday Telegraph that space is “fundamental” to Britain’s way of life and warned it is not just Russia developing weapons, but also China. “China too are developing offensive space weapons, and both nations are upgrading their capabilities right across the spectrum,” he wrote. “Such behaviour only underlines the importance of the review the Government is currently conducting into our foreign, security, defence and development policy – the deepest and most radical since the start of the Cold War.”

The exploitation of space as a military frontier has been a controversial topic since the 1960s. In 1967 it resulted in the signing of the Outer Space Treaty, which bans weapons of mass destruction from being stationed in outer space, prohibits military activities on other planets and outlines legally binding rules for the peaceful exploration and use of space.

But this treaty and specifically the idea of peaceful exploration is under threat, as new technologies make space travel more affordable. A new arms race is starting to emerge, which the UK appears to be looking to join rather than prevent. Last year, President Donald Trump established America’s Space Force and during a November Thanksgiving speech, he echoed the UK’s Defence Secretary, claiming it was formed because of “China and Russia”. In reality, the US has been exploring the idea of militarising space for decades – long before Russia or China carried out anti-satellite missile tests.

In fact, the US tested its first anti-satellite weapon as far back at 1959 and been developing the technology ever since. In recent years, it has also conducted at least six clandestine missions into space using the unmanned X-37B space plane. The aircraft, which looks similar to the space shuttle, has been shrouded in secrecy since it was first seen and almost nothing is known about what it has been doing during these missions, or what its capabilities are. 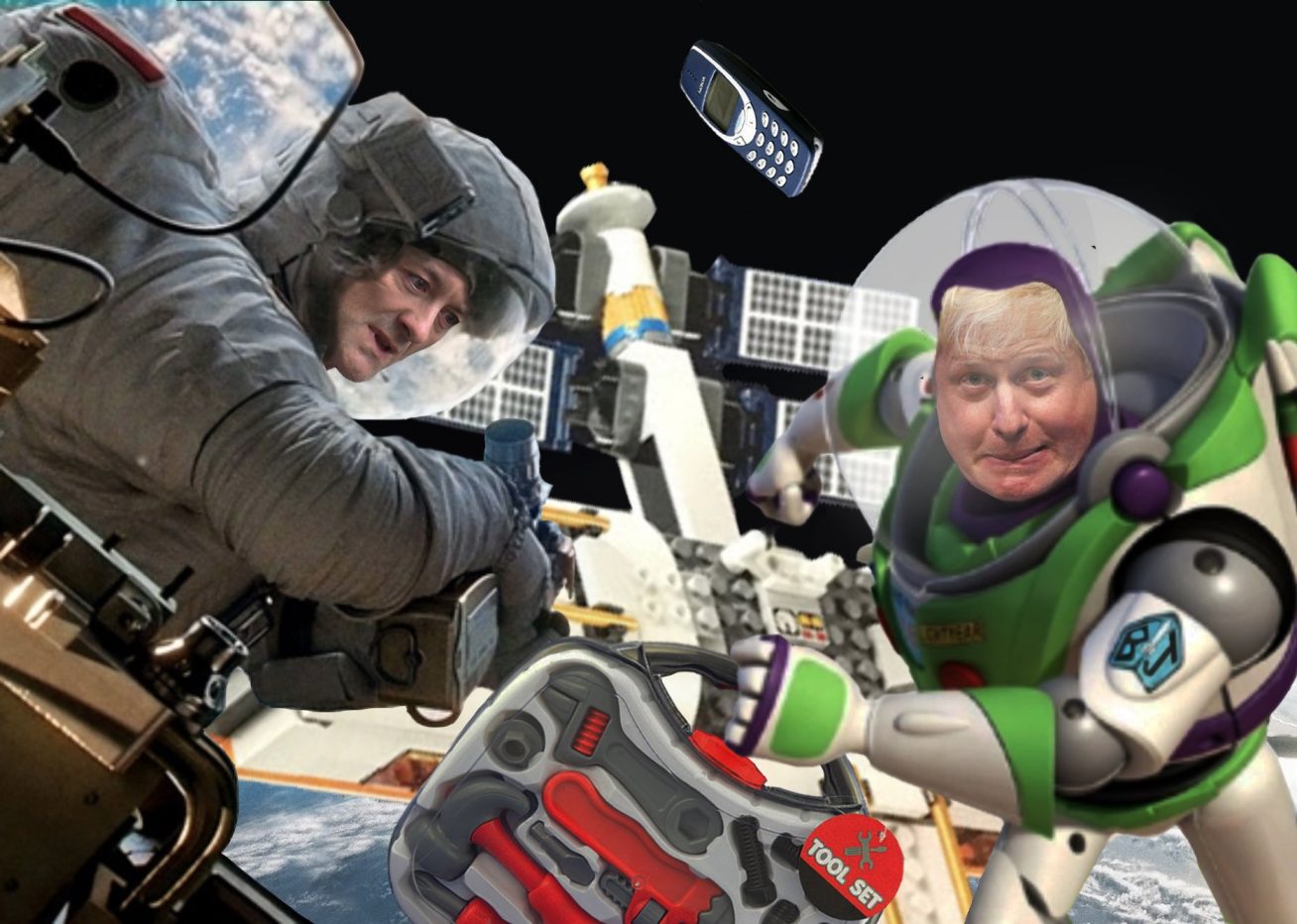 Similarly, China has been building up its own military space programme, developing a military space plane. In September, this ship reportedly went to space and released an unknown object into orbit. A US Department of Defence report published in September states that China: “continues to develop a variety of counter-space capabilities designed to limit or prevent an adversary’s use of space-based assets during a crisis of conflict”.

US Space Force General John Raymond said in November he believes the aim of countries like China and Russia is to block America from accessing space. “I think there’s a realisation amongst nations that access to space is no longer a given,” he said in an article for the US Department of Defence. “We’ve got to make sure that we stay ahead of this growing threat.”

But arguably America is the one driving the very threat it claims to be trying to combat, not only by leading efforts to develop space weapons but also by refusing to support international action aimed at curbing an arms race.

Indeed, for several years, Russia and China have been attempting to introduce a new UN treaty, similar to the one signed in 1967. The Prevention of an Arms Race in Outer Space treaty would not just reaffirm a ban on WMDs in space but also other types of weapons. Despite gaining wide support from other nations, it is the US who opposes the proposal, along with its ally Israel. In October 2018, the pair also voted against four other resolutions, including one aimed at preventing an arms race and another on not placing weapons in outer space.

Now post-Brexit Britain appears to be getting drawn into the US’ space ambitions through what Raymond calls “global partnerships”. Bruce K. Gagnon of the Global Network Against Weapons and Nuclear Power in Space told Byline Times the US needs to forge alliances with other nations because without them it would not be able to afford its ambitions.

This in part is why NATO members, including the UK, are facing significant pressure from America to boost defence budgets. “The US can’t afford to pay for this alone – thus the extreme pressure on NATO allies to increase their spending on military, with the Pentagon controlling the tip of the spear,” Gagnon said. “We are currently witnessing the literal explosion of allied spending on space war technologies.”

One such partnership is Operation Olympic Defender, which the UK was the first nation to join in 2019. Penny Mordaunt, who was the UK’s Defence Secretary at the time, said joining it was part of a £30 million space programme for the Ministry of Defence. Olympic Defender is said to centre on deterring “hostile actions by rivals” and Mordaunt declared, “today we show the sky is no longer the limit for our Armed Forces”.

“This echoes Trump’s Space Command, activated in 2019 as a precursor to his Space Force,” Webb said.

He further explained that the UK has been working with the US on space-bound military and intelligence programmes years, with its biggest contribution being miniature satellites built by Surrey Satellite Technology Limited (SSTL).

The company, which has 40% of the global small satellite market, was paid more than £4 million by the MOD to develop a low-orbit satellite known as Carbonite 2. It launched in 2018 and, according to the Government, could be the first step towards “high-tech satellites beaming video directly into the cockpit of fighter jets, improving the situational awareness of UK pilots by giving them the very best imagery and information anywhere on Earth in real-time”.

Exactly what kind of military activities will take place at Scotland’s Space Command remains to be seen, but Webb believes the Government picked Scotland as the location due to its history of rocket launches and because it is the planned location for the UK’s first space port. He points specifically to the Edinburgh-based company Skyora Ltd, which has carried out a series of launches and tests since 2018.

Following Johnson’s defence spending announcement, Volodymyr Levykin, CEO of Skyrora said the company was “proud to be working alongside the Government to achieve this launch capability in the UK”.

The Government has also already chosen Scotland as the location for the £17.3 million Space Hub Sutherland, a launch facility that will allow for vertical rockets to launch small communication and earth-observation satellites. The port is being backed by Highlands and Islands Enterprise in conjunction with the UK Space Agency, Orbex and – highlighting a potential military interest – US aerospace and defence company Lockheed Martin.

While the UK’s Defence Secretary claims rival nations now have the ability to “cripple” vital systems linked to communication and navigation, Webb says putting a military application at the forefront of the UK’s space investment only encourages the growth of a space arms race. “Some politicians have spoken out against it but no major political party has so far fully understood the waste of money and resources involved, and the importance of stopping a space arms race and its possible catastrophic consequences,” he said.

However, with the space sector estimated to worth trillions, it may be impossible to stop militarisation. Few, if any, countries will be willing to make a move that could risk losing dominance of the new market and – post-Brexit – the Government has already said it hopes to control 10% of the global space economy by 2030. It is an ambition some believe is unlikely to happen and, instead, the UK could find itself reliant on US space policy, similar to the way it already is with nuclear weapons.

According to UK space entrepreneur Will Marshall, Brexit is “galactic scale stupidity”. “Post-Brexit, no CEO will consider the UK a location to put a space company,” he said. He may well be proven right.

WATCH
Mike Galsworthy, founder of Scientists for EU, talks to Byline TV about the impact of Dominic Cummings and Brexit on the UK’s science industry.