It was a moment that could only have happened in 2020. When the demonstrators that had stormed Armenia’s parliament ran out of bottles of water to throw, they pelted the speakers with hand sanitizer instead.

Various Armenians, some dressed in military uniform, others draped in the national flag passed around the bullhorn on the central podium, venting their fury at the government. No one could agree on what they wanted. Some argued for a military coup, others for the leader of the opposition to take over. Others wanted Armenian Prime Minister Nikol Pashinyan to arrive and face a ‘people’s assembly’ that would force him to continue the war. A small but vocal minority argued that he had made the right choice to stop the bloodshed.

“We need to go back” Vayan Asaikyan, a 49-year-old man from the captured town of Shushi, told me with tears in his eyes. “I lost my 20-year-old brother in this war. Now I have no home and no family of my own. I want to go back and fight for my land. Karabakh will always be Armenian.” This grim spectacle capped off one of the darkest years in the country’s modern history.

The Peace Agreement Nobody Wanted

Just a few hours earlier, the country’s Prime Minister had ended the bitter 44-day war with Azerbaijan over the disputed territory of Nagorno-Karabakh. In a 2 am statement, Pashinyan announced he had chosen to sign an ‘extraordinarily painful’ peace agreement with the Russian and Azerbaijani governments.

Under its terms, the Armenian backed government of Artsakh would give Azerbaijan control of the three regions of Nagorno Karabakh that had been captured during the war. They would also return all of the Azerbaijani lands outside of Karabakh that had been controlled by Armenian forces as part of a buffer zone. Armenia would keep just a narrow sliver of land as a corridor connecting the country to the regional capital Stepanakert. Just under 2,000 Russian peacekeepers were to be deployed to patrol the line of contact and protect the remnant of Karabakh still under Armenian control. For a country extremely proud of its rich heritage and military prowess, it seemed a moment of national surrender.

Within minutes of the deal being announced, people flooded the streets of the country’s capital Yerevan and a crowd filled Republic Square in the centre of the city. Groups of vigilantes began breaking into various government institutions, claiming they were searching for Pashinyan. Wild rumours started spreading that Pashinyan had fled to Moscow, or even Canada. One witness described gunshots being fired in warning near the building of the Ministry of Defence.

Hripsime Hakobyan, an 18-year-old economics student who grew up in Yerevan, recalled how just over two years ago, Armenia’s ‘velvet revolution’ had given Armenians so much to be optimistic about. 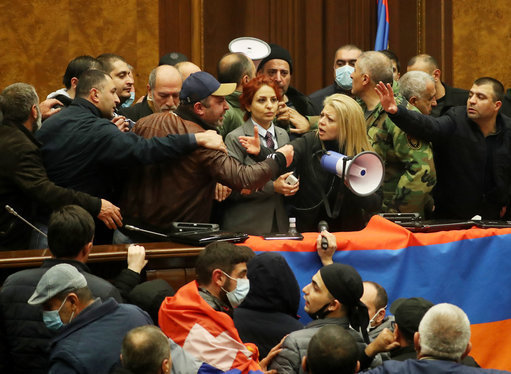 “For several weeks in May, my friends and I would leave school and instead walk eight kilometers’ to protest in this same Square. People shared food, water and clothing- but more importantly, we were sharing the hope for a better future for Armenians. We were fighting to throw out dictators and oligarchs, end corruption, and install a government that represents ordinary people. We were peaceful and united”. This time, she felt a deep helplessness as she saw her fellow citizens defeated and divided. “I felt so much anger and disappointment at the chaos I was seeing.”

Yet as far as riots go, this one was rather tame. There was a lot of broken glass and a few ransacked government offices, but no widespread violence or destruction. But there were few injuries and no widespread destruction. The unrest never seemed like it would escalate out of control. Even within the occupied parliament, the majority wanted to shout rather than fight. Sensibly, the authorities recognised this and let the demonstrators tire themselves out. By the following morning, MPs were returned to their seats and calm had returned to the streets of Yerevan. It was more a spontaneous outpouring of grief than a concerted attempt to take down the government.

But a strong undercurrent of discontent remains, and recriminations are expected. Many claim that regardless of the military situation, Pashinyan’s real failure was that he had not been honest with the public.  Shake Isayan, a Parliamentary Deputy from the opposition ‘Prosperous Armenia’ party told Byline Times: “We are not angry about the agreement itself so much that we are angry that Nikol failed to consult the people or their elected representatives. He signed this with no warning.” She showed us a piece of paper with around two dozen signatures from her fellow representatives demanding him and his party to come to parliament and explain themselves.

One particular issue was that it appeared Pashinyan had misled the public over the status of the battle in Shushi, claiming that it was ongoing when in fact the city had fallen several days previously. Lika Tumanyan, a local news anchor, accused him on Armenian TV of “hiding the facts from the public… he fed us with news about victory, never talking about the fact we had so many casualties and we were losing the war”. On Facebook she posted that “Pashinyan is a traitor who will go down in history as the leader who handed over Artsakh”. Many of Pashinyan’s supporters have been promoting their own narrative of a ‘stab in the back’. They say he was betrayed by fifth columns within the oligarchs he had replaced after the revolution, who had made secret deals with rogue elements in the military and foreign powers.

In the middle are those who believe the Prime Minister faced an impossible situation and had no choice but to act on the advice of his generals.

Ezras Tellanian, a Deacon in the Armenian Church who had left the US to go to Artsakh and witness the war, said: “Remember that Arayik Harutyunyan, the President of Artsakh, also agreed to this deal. This was not Pashinyan’s decision alone.” Regardless, he added: “This is not yet the time to blame other Armenians. Instead, it is a moment for our society to come together so we can grieve and figure out how to move forward. We can disagree with our leaders while still supporting them because that is what is right for the country. This is what you do in a democracy, even a young and inexperienced one such as ours.”

Failed by the International Community

It is not just within Armenia that anger is directed. One thing all Armenians seem to agree on, is that the international community failed them. The United States, the European Union, the United Nations had played almost no role during the conflict. Instead, they left the details of the ceasefire to be hashed out by Russia, with Turkey’s presence looming in the background.

A local UN source said that employees in the organisation’s Yerevan office had been instructed to say nothing publicly about the conflict – even about nonpolitical issues such as civilian casualties. A UN spokesperson told Byline Times that no such instructions were given to UN Armenia’s staff and that it has commented on the conflict, but that staff members have to follow the UN’s social media guidelines.

When Byline Times visited the conflict zone several weeks ago, the only major international organisation on the ground was the Red Cross. Their work had been severely hampered by the indiscriminate shelling which Azeri forces had inflicted on the whole of the conflict zone. Shushan Doydoyan, head of the Armenia Freedom of Information Center, said she tried to make NGOs take notice of the situation, but found little interest. 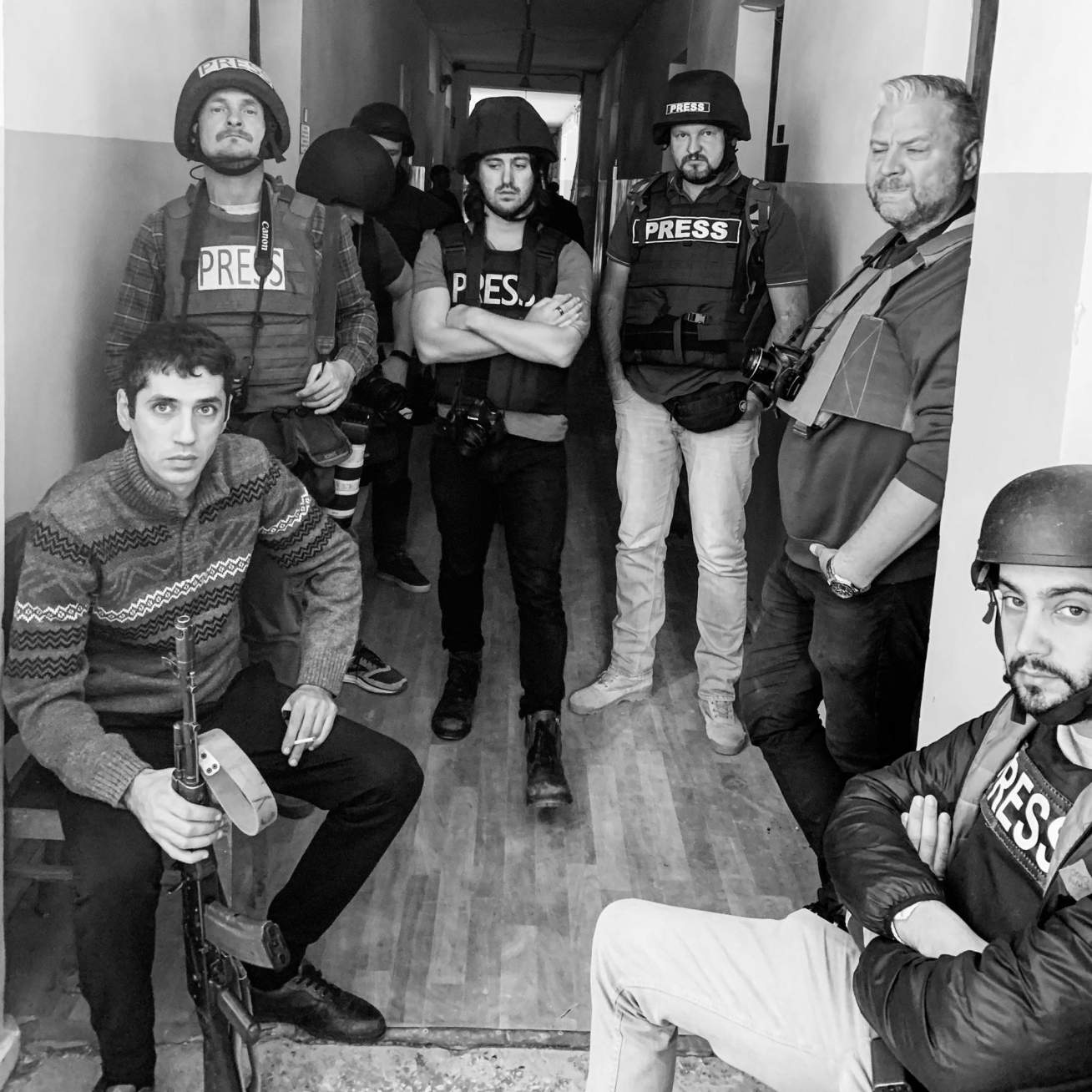 ‘Don’t Happy, Be Worry’Intense Fighting between Armenia and Azerbaijan

She told me, “the modern world and international organisations didn’t put any effort to defending our young democracy from corrupted and oligarchic influences”. With the world distracted by the US elections and the COVID pandemic, no one wanted to get involved a war over a disputed territory in the South Caucasus that most people in the world knew little about.

Just days on from the war’s end, a semblance of normality is returning to Yerevan. Cafes and bars are filling up again. Billboards in public squares that had been showing photos of heroic soldiers and patriotic slogans are now advertising regular goods such as designer clothes and perfumes again. At present, this ceasefire continues to hold. There have been a series of peaceful protests across the capital, but they are yet to pose a serious threat to stability.

But even now, the conflict is far from settled. There was nothing in the peace deal about the status of the remaining areas of Nagorno Karabakh, which had been the key sticking point in the previous decades of negotiations. If Azerbaijan follows through on its threats to bring Turkish peacekeepers to its side of the conflict line, then Russian and Turkish troops will be facing each other on either side of a volatile conflict zone with only a few kilometers separating them.

Social media on both sides threatens the resumption of conflict. A popular slogan going around Armenian Twitter and Instagram accounts says, “Shushi will be Armenian again”. On the Azerbaijani side, many seem to go further. Encouraged by President Aliyev, they say with no evidence that Armenia’s capital Yerevan is rightfully part of Azerbaijan, calling it ‘Irevan’.

Despite the bloodshed and tears, this conflict is still not over.