Chris Sullivan remembers the run-down, experimental and sleazy New York of punk, hip hop and disco – the creative epicentre of the world, suffocated in recent years by big developers, greed and rent hikes. But could COVID-19 signal a return to its innovative and more humanistic edge?

“I’ve moved back to Manhattan,” proclaims film producer Andrew Mysko. “It’s like it used to be when I first arrived in 1987. Everything I hated about New York is gone, especially the a**holes.”

Mysko is that rarest of beasts. He bought a flat in the Bowery on the Lower East Side because it was rundown. It had the character and soul of the New York he had always pictured. 10 years ago, he left to live upstate because, he says, the city had become “more reminiscent of one big shopping mall than one of the greatest cities on earth”.

Indeed, as developers were given carte blanche by Mayor Michael Bloomberg, in office between 2002 and 2013, the city had its innards ripped out. Landlords were allowed to charge whatever rents they wanted and the city became too expensive for the young and creative and too corporate for the older and wiser. The soul has been sucked out of the city like an oyster from its shell.

Visiting New York 40 years ago, I found a creative, experimental, free-thinking, mad chunk of wonder in the Big Apple. Although it was a mess, I couldn’t see how it could be faulted by any reasonable person.

I was lucky enough to see Manhattan still embracing its progeny, punk rock, at clubs such as CBGB and Max’s Kansas City, and witnessing the newest arrival, hip hop, in the school yards and basketball courts of the Bronx and Harlem.

“New York was expensive but nowhere near as much as now and so attracted all the young creatives, rebels and non-conformists who just could not fit in anywhere else and they gave it an edge that money can’t buy,” said the late great photographer Leee Black Childers. “Manhattan was the place where anything might happen and usually did. We felt as if we could be penniless one month and on the cover of Rolling Stone the next and many were.”

I was privileged enough to stay in the Lower East side and shop at the neighbourhood’s wonderfully eccentric vintage stores; eat breakfast for next to nothing at one of the many Russian diners; drink at dive bars on St Marks Place, the haunt of poets, intellectuals and malcontents.

If any city could be likened to Orson Welles’ immortal description of the creation of art through turmoil in The Third Man it was the New York I visited then. As Harry Lime says in the 1949 noir: “In Italy for 30 years under the Borgias, they had warfare, terror, murder, bloodshed. They produced Michaelangelo, da Vinci, and the Renaissance. In Switzerland, they had brotherly love, 500 years of democracy and peace, and what did they produce? The cuckoo clock.”

But how did it end up being such a creative melting-point in the 1980s?

Manhattan boomed after the Second World War and rose to its so-called peak in the 1950s, during ‘The Golden Age of Capitalism’. It was the fastest-moving money-making island in the world.

But, by the late 1960s, the boom had all but fizzled out. Many people headed for the suburbs, while major industries were dropping like flies in winter.

The situation was not helped by the Republican Mayor John Lindsay, elected in 1965. He presided over social unrest and strikes by teachers, transit, sanitation and construction workers. In 1968, huge mountains of garbage caught fire and gale force winds whirled filth through the streets. Lindsay later called the last six months of 1968 “the worst of my public life”.

A year later, New York’s gay community rose up and rioted after a police raid on The Stonewall Inn in Greenwich Village turned violent. The bar’s customers snapped and, joined by others, they retaliated. A police van was overturned, missiles thrown and buildings set on fire.

“We’d all had enough of this racist, homophobic, police sh*t,” Childers recalled. The riots lasted on and off for five nights and represented the first time in American history that the homosexual community fought back against the discrimination of sexual minorities. It kickstarted the gay liberation movement.

As Manhattan moved into the 1970s, rebellion was the prevailing attitude. New Yorkers didn’t consider themselves to be ‘American’, they were ‘New Yorkers’.

“We felt as if we were all in it together,” Childers said. “If you could survive in New York whether gay or straight, junkie or alcoholic, as long as you weren’t boring, you were one of us.”

By 1975, just as punk, disco and hip hop were brewing up a storm, trouble swirled.

On 17 October that year, New York City was on the verge of financial collapse. With its debts of $453 million due at 4pm that day, there was only $4 million in the coffers.

Banks refused to lend it money and President Gerald Ford steadfastly rejected any thought of helping this maverick metropolis. The only option was to borrow money from the city’s pension funds, but the Teachers’ Retirement System – which had agreed to buy the city’s bonds a few months before – were now trying to pull out of the deal.

The question was not if the city would default and collapse but how.

“We needed to figure out which services were essential and which weren’t,” the then New York Mayor Abraham Beame’s press secretary, Sid Frigand, recalled. “Bridge tenders who raise and lower bridges were essential. Teachers weren’t life-or-death. Hospital services and keeping the highways open was essential.”

The city was at crisis point and substantial savings had to be made such as closing numerous community hospitals, a huge increase in subway fares, an embargo on wage increases and the laying off of thousands of employees.

If the city failed it would have brought down hundreds of banks all across the US who owned New York City bonds, but President Ford refused to provide it with aid. As his press secretary Ron Nessen said: “This is not a natural disaster or an act of God. It is a self-inflicted act by the people who have been running New York City.”

New York will always be special and ever-evolving…  it is the most intensely creative and diverse few miles of island on this planet and it will always be.

Just in the nick of time, at 2:07 pm on 17 October 1975, the teachers’ union stepped up and agreed to come up with the city’s deficit from their pension reserves.

Ford was incensed. The front page headline of the following morning’s edition of the New York Daily News thundered ‘Ford to City: Drop Dead’. The next year, Jimmy Carter received the third greatest share of the vote that any Democratic presidential candidate had ever accrued in New York City, winning the state and the presidency.

New York limped towards the 1980s on a ‘wing and a prayer’ to become, not only the artistic capital of the world, but a city buzzing with a creative heartbeat that was almost deafening.

The empty loft spaces that had been vacated in the decade before were rented out as artistic studios so painters such as Jean-Michel Basquiat, Keith Haring and a myriad of sculptors and photographers, little record companies, magazines and fanzines could afford a space to work and live in.

In this heady mix, there were all-night clubs such as the Mudd Club where you’d see poet Allen Ginsberg next to Debbie Harry talking to rapper Fab Five Freddie standing next to Hunter S Thompson. There were gay, S&M, cross-dressing and punk clubs. Then legal, MDMA was  everywhere. It was reminiscent of Dante’s Inferno but the people were ever so friendly.

I married a New Yorker and travelled there constantly throughout the1980s and early 1990s. Even though yuppies were on the march, it wasn’t suffocating.

Then everything changed under Mayor Rudi Giuliani. 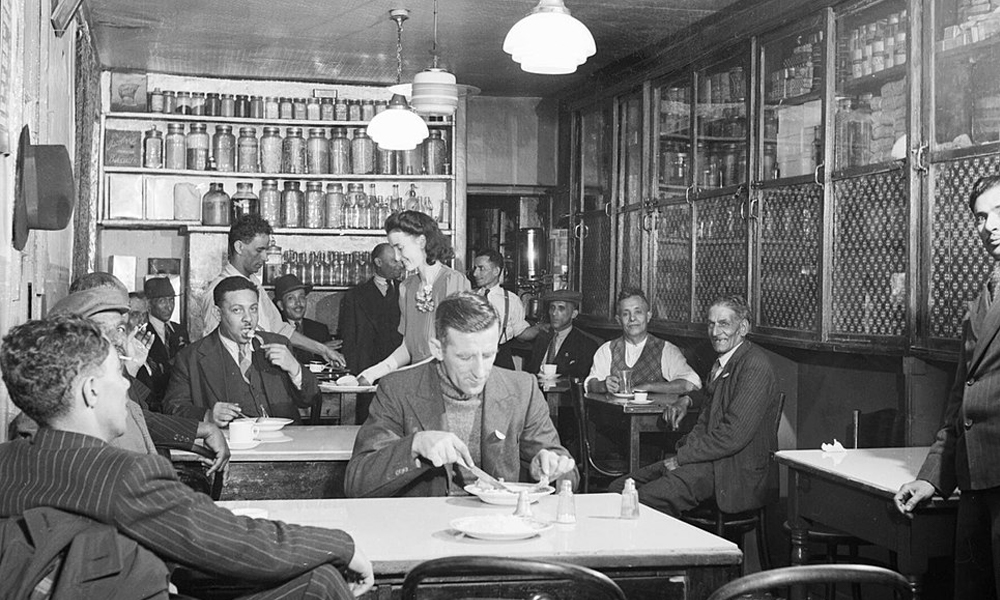 How Cardiff’s ThrivingMulticultural Hub Was Crushed

Since the 1980s, the likes of Donald Trump had been big property players in New York. But, under the mayoral reign of his future lawyer, Giuliani, from 1994 to 2001, more developers moved into the city and rents were pushed even further up.

Slowly but surely, the little bars and quirky clubs started disappearing, to be replaced with stores selling pashminas and scented candles. Suddenly, the Lower East Side was full of expensive restaurants and one had a hard job buying a hammer.

“I loved New York when it was seedy and somewhat affordable,” says quintessential New Yorker Ron Ross. “When Giuliani became Mayor everything truly turned. What Giuliani started, with the cleansing of Times Square, [his successor] Michael Bloomberg took to new technocratic heights. Bloomberg thought gentrification and business tax incentives were the way to ‘restore’ New York City. The result was that Manhattan was abandoned by anyone young and creative. Most of them started living, working and drinking in rundown parts of neighbouring Brooklyn.”

Under Bloomberg, the city took a dive in the eyes of many. But things seem to be changing for the city once more.

There was a time when Manhattan’s Lower East Side and Greenwich Village offered experiences and products not available anywhere else, and people flocked to them. The Coronavirus pandemic seems to have underlined the redundancy of big characterless conglomerates.

In Union Square, for instance, 73,000 square feet of empty retail space is going begging in the boarded-up building once known as Tammany Hall. In 2016, when it was set for a multi-million-dollar refurbishment, a number of ‘mom and pop’ stores were evicted –  “to make way for more chain and luxury businesses that would fit the class of workers intended for this hi-tech makeover,”  as Jeremiah Moss said in his Vanishing New York blog.

On the prestigious Broadway and Fifth Avenue nearby another formidable chunk of real estate lies forlorn, while the streets remain empty. Gone are the shoppers, the tourists and the office workers. Massive Manhattan stores such as JCPenney, J. Crew and Brooks Brothers have filed for bankruptcy.

It doesn’t look like the chains, the luxury businesses or hi-tech firms are rushing in now. So could the downturn of the pandemic pave the way for a new outpouring of imagination, innovation and joy?

I am convinced that we can be optimistic about the future. Inner-city rents are likely to have to come down; office and work spaces could, as they were in the 1970s, be turned once again into artistic studios; a new era might well be lurking around the corner.

“For me, New York will always be special and ever-evolving,” says music executive Jon Baker. “I lived in Manhattan for a total of 25 years and I hear people say ‘oh New York has changed and is not what it used to be’. We all have our preferred decade, but at the end of the day, it is the most intensely creative and diverse few miles of island on this planet and it will always be. For me, every decade has had its unique spin.”

Review: ‘I Care a Lot’ – The Respectable Face of Mobster Mentality