Sanket Jain reports on how an incompetent Government response, mixed with stigmatising beliefs around the Coronavirus, are leading to a humanitarian crisis

A day after declaring the world’s strictest lockdown on 24 March, India’s Prime Minister, Narendra Modi, said that India would win the war against the Coronavirus in 21 days.

The country has now passed five million recorded cases of COVID-19, with more than 87,000 reported deaths. In the past 21 days (28 August to 17 September), India added 1.7 million infections to its numbers – more than the total case count in Russia, the fourth worst affected nation.

When India just had more than 500 cases, a 21-day lockdown was declared by Modi, giving 1.3 billion people a mere four hours’ notice to prepare themselves. All activities were brought to a halt, including public transport. The result was a 23.9% contraction in the country’s GDP. Experts warned that it was too early for India to go into lockdown. It didn’t help to ‘flatten the curve’ of the pandemic either.

What India has borne is the brunt of the politics of populism.

An ill-prepared lockdown left at least 10 million migrants ‘reverse migrating’ to their villages from business towns and metropolises. With poor testing rates and an overburdened healthcare system, the Coronavirus crisis worsened as several cases went undetected. Meanwhile, the Government refused to make public any data on the number of deaths of migrants and doctors. 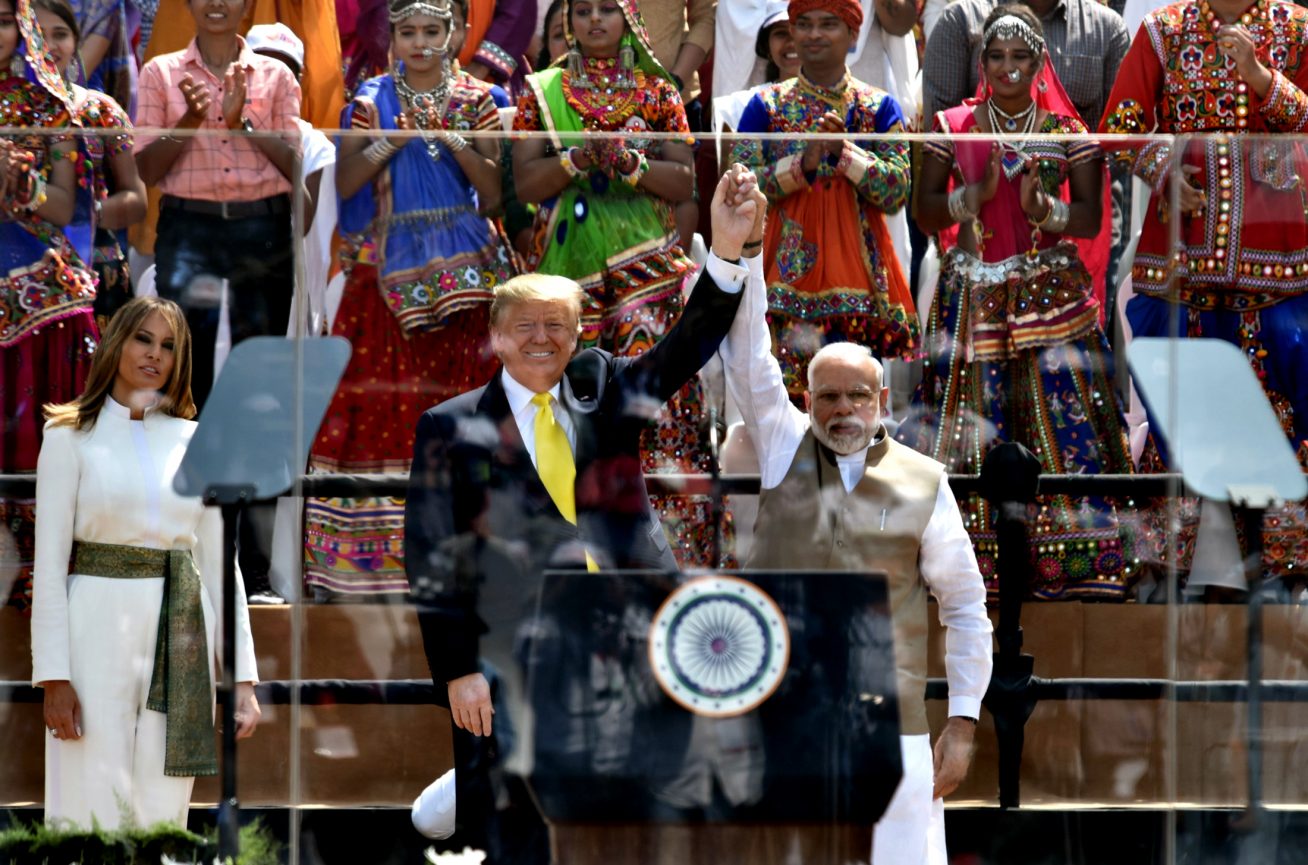 The Mythical Nationalism of Trump and Modi Has Failed

In an attempt to ramp-up tests – and to meet Modi’s pledge of a million tests a day – India began using the cheaper and faster rapid testing, with an accuracy rate of 50%. Through this, India is missing many cases a day, with reports warning that India has up to 250,000 Coronavirus cases daily. A serological survey by the Indian Council of Medical Research found that India missed 6.4 million cases until early May.

According to the Indian Medical Association, 273 doctors have succumbed to the Coronavirus.

With inadequate isolation measures and a mere 756 district hospitals, 5,684 community health centres and 30,000 primary health centres for 833 million rural Indians, what has now erupted is nothing short of a humanitarian crisis.

Pravin Kamble (not their real name) was fearful of calling his contractor.

“I at least need another 21 days,” he said in the first week of August: 14 days of home quarantine and another seven days to ensure the ostracism died down.

His troubles began when more than 400 people from his village in Kolhapur district of western India’s Maharashtra state came into contact with a local doctor who tested positive for COVID-19. The village administration began contact-tracing and asked people to get tested in Kolhapur’s Chhatrapati Pramila Raje public hospital.

At the time, the 37-year-old was then finishing off his painting work at a construction site and wouldn’t return home for the next 17 days. “I immediately informed the family members about getting tested,” he said.

After his test in July, he was quarantined in the local public school for three days awaiting a report. Things changed within moments of it arriving which showed he had tested positive. It was 6.45 pm in the evening and, in the next 30 minutes, a Government ambulance rushed towards the school. “We were scared of what was happening,” Pravin recalled.

Even today, people don’t talk to me. It is unbelievable.

The ambulance siren triggered fear in the 6,000 people living in the village, which now had more than 50 cases. Soon, everyone knew that Pravin and five others had tested positive. What followed was havoc.

His name and address were leaked on the village WhatsApp group within a few minutes. He was then taken to an institutional quarantine facility. “I was in a 25 by 50 feet hall with 12 others,” he said. Every day doctors would monitor his temperature and oxygen levels twice. “I had no cough, cold, or fever.”

After 10 days, he was discharged and hand-stamped with ‘Home Quarantine for 14 days’.

“They didn’t take a swab when we were asked to leave,” he said. Several people I spoke to in the villages of Kolhapur district said that they weren’t re-tested before being discharged.

But a stigma had developed.

“None of the neighbours spoke to me for a month,” Pravin said. “People think that if they talk to me, they will contract the virus.”

As a painter averaging ₹800 (£8.50) daily for 10 hours of work, he couldn’t find any work during the lockdown. “A lot of construction projects in Kolhapur have halted because people don’t have money,” he added.

Somehow, he managed to find work – but then the ostracism around COVID-19 meant that he was at risk of losing his livelihood for another 45 days. “Even if I complete my quarantine and the contractor gets to know I contracted COVID-19, I won’t be hired,” he said. Hence, he decided to step out, only having stayed inside for another week after completing his quarantine period to avoid “conflict and ostracism”.

Like Pravin, a fellow villager, Dayanand Gaikwad (not their real name) sensed the danger when he was contacted by the village administration. Before getting tested, the 47-year-old immediately shifted his two buffaloes to a relative’s house in the village.

“A farmer doesn’t have the habit of sitting idle,” he said. “At the quarantine centre, I would think of the family, farm and animals.”

Daily calls from his family members scared him. They started when villagers began circulating his name on WhatsApp groups. Of his seven family members, only he had tested positive for the Coronavirus. “The villagers didn’t even allow my family members to step out of the house for 10 days,” he said. “Bahishkar kela aamcha (they made us outcasts).”

Petrified, his children would call him every day asking him to return. “Only one neighbouring family helped by buying a few vegetables,” he added.

Dayanand decided to make a WhatsApp video from the quarantine centre, saying how testing positive for COVID-19 wasn’t “as scary as it sounds” and appealed to people to “stop stigmatising the patients”. He spoke to the village COVID-19 committee about these concerns. “Initially, I feared a lot, but now I don’t think about it,” he said.

By quarantining for a month, he ensured that none of his customers ostracised him. However, it came at the cost of lost work and a considerable loss of income.

This narrative of ostracism is playing out for several thousands of marginalised people, particularly from smaller towns and villages where the Coronavirus is spreading rapidly.

What has changed in Dayanand’s life after a month of recovery? “Even today, people don’t talk to me. It is unbelievable.”

Deepali Rawal, an accredited social health activist on the frontline of rural healthcare workers, who has been working in rural Kolhapur for six months, said: “People have now made us a pariah. When we survey door-to-door, rarely do they reveal COVID-19 symptoms fearing the ostracism.”

On the second day of lockdown, India’s Finance Minister announced the distribution of free food grains for the 800 million poor as part of the Government’s relief package. However, its implementation took at least 15 days in several villages – putting millions of people at the risk of starvation.

This distribution was to be done under the Public Distribution System (PDS) – a system that helps facilitate the recurring supply of grains and other essentials to people through fair price shops across the country. But, according to a Government report, 144.5 million eligible people didn’t receive grains for May and 64.4 million for April.

More than 100 million people have also been left out of the PDS because the Government is using data based on the 2011 Census. This is in addition to the number of people who didn’t receive rations despite being eligible.

The foodgrain stock procured by the Food Corporation of India rose to a massive 77 million tonnes in March. However, the Government on 20 April announced the converting of “surplus rice” to ethanol, which it defended because of the need for alcohol-based sanitisers. According to documents obtained by Wire, Modi had cleared the way for this move in a meeting on 3 March. Even 10 days later, India had still not recognized COVID-19 as a public health emergency.

The Government’s response to apathy brought in more apathy as 91.2 million workers and labourers from the informal sector lost their jobs in April. Moreover, an ill-planned lockdown took away 18.9 million salaried jobs.

For Dayanand, the advice is simple: “I was a COVID-19 positive patient. Don’t fear the virus, it can be treated. Follow social distancing and wear a mask because we’ll have to learn to live with it.”

But, in Modi’s India, will things continue to get worse before getting better?