The Spectre of Shamima BegumReturns to Haunt Britain

The Court of Appeal has ruled Shamina Begum, who left her home in east London as a child in 2015 to join the Islamic State, should be allowed to return to the UK to challenge in person after the Home Office’s February revocation of her British citizenship.

Even prior to her physical return here on British soil, for all intents and purposes, Begum has already returned. She has returned as a memory of collective fear; returned through the news machinery already cascading far and wide the court’s ruling through their multiple circuits of ideological dissemination, waking and refreshing social anxieties made dull and less acute over time.

There is nothing like the return of Begum to exemplify Britain’s gender superiority through the narrative of white men rescuing brown women from brown men.

Begum returns as she re-turns our attention as that which should be feared. The repeated circulation of her black, niqab-framed face sharpens the shadowy contours giving form to the spectre haunting our securitized phantoms: the enemy-citizen lurking in our midst, an unknown known, bearing malevolent intentions and deserving nothing short of pursuit and expulsion from the national collective of authentic, bona fide British citizens.

The Myth of Rescue

Begum’s exposed face, free of her niqab which is flipped back onto her head, affirms the muscular thrust of this sexually charged project of expulsion: the enemies who once hid behind veils, Islamic or otherwise (multicultural niceties, political correctness) will be unveiled and laid bare for the terrorists that they are, and stripped as the ultimate act of violation— of their citizenships. And then abandoned, legs open to heave out more dammed offspring in the places of exile.

As Begum discursively returns through mediatized debate, comment and adjudication, her return promises political returns. Her story will do work for a nationalist project that seeks to demarcate the boundaries of who belongs and does not belong on the basis of British values which are in reality universal values, here made particular and exclusionary in order to trumpet a civilisational and national exceptionalism.

Begum, having chosen ISIS over Britain, chose barbarity, irrationality, and pre-modernity over civilisation, enlightenment, and modernity – so opined Sajid Javid in February in defence of his executive decision to banish Begum from Britain: “Whatever role they played in the sole-called caliphate, they all supported a terrorist organization. And in doing so, they have shown that they hate our country and the values we stand for,” Javid declared.

More of this logic will accompany Begum’s physical return, turning her sorrowful loss of childhood and children into an ideological ballast by which a national identity of exception will be reinforced, sustained, and replayed. 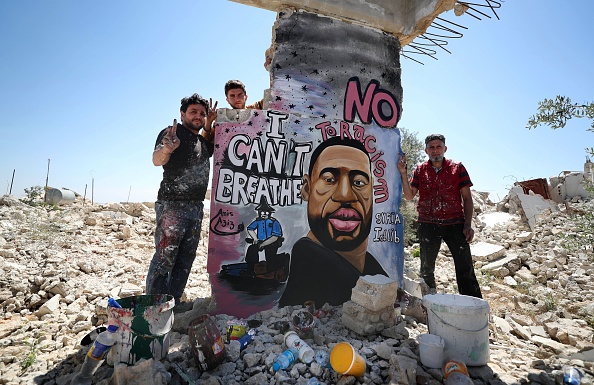 OUR LIVES MATTER: “I Can’t Breathe” & the Syrian Living Dead

There is nothing like the return of Begum to exemplify Britain’s gender superiority through the narrative of white men rescuing brown women from brown men: returning Begum to Britain is to rescue her from lawlessness to the rule of law, from the chaos of vigilante sentencing to the calm of courts, hearings, and appeals.

This narrative of rescue sits within and becomes part of the gendered iconographies of the war on terror also featuring Malala, Bibi Aisha, #BringBackOurGirls, and blue Afghan burqas. It is these iconographies that leverage the living conditions of Muslim women around the globe to justify the extreme policing of Muslim men better described as practices of deferred death – solitary confinement, rendition, torture and the list grows.

As Begum returns as the embodiment of the values which hold apart and keep Britain distinct from the terrorists with whom it is at war, she revives the continuities between the already radicalised and the potentially radicalisable.

After all, the values believed to cause the ‘clash of civilisations’ under the sign of terrorism are the very same values manufactured as the obstacles keeping British Muslims apart from their British co-citizens, and ostensibly preventing Muslim integration into Britain (as opposed to racism, discrimination, and social deprivation).

Thus Begum, binding together the logic undergirding the War on Terror to the putative failures of British Muslim integration, returns as the re-incarnation of the British Muslim qua potential terrorist, not really one of us, to be expelled.

As the political chatter of politicians and the commentariat begins afresh, Shamima Begums will multiply and proliferate into an endless stream of veiled or hijab-wearing figures marching – to borrow from Nisha Kapoor – into “internal exile”. Internal exile describes the living conditions of those who look most like Begum as the symbolic borders of national belonging tighten around them.

Internal exile is the tale of unequal citizenship narrated through evaporating educational, housing, and employment opportunities. It is the story of lives gripped by racial terror – an overpowering fear of the possibility of facing assault, disfigurement by acid, rape, or, worse, death at the hands of co-citizens who adhere to the fiction of a white nation held siege by veils, beards, and halal chicken.

In this story, exhortations to “go home” are prosaic. And the plot progresses as the characters are required to prove their Britishness by staging spectacles that confirm their not-so-Muslimness and insist on their human-ness.

Internal exile is nothing short of symbolic de-naturalisation. As Begum returns, British Muslims will face a fresh episode of being un-made as citizens.

As the currency of Begum’s story is used for political returns, it will be the British Muslim who is re-turned—as in turned anew—into the enemy-citizen in this return.

After Dark: Are the Lights Going Out on Public Service Broadcasting?

Julian Petley, 27 October 2020
Julian Petley looks at the people behind Andrew Neil's new GB News and sees ominous signs both for the BBC and the principle of impartiality

Snatching Milk: Boris Johnson Has Picked the Wrong Hill to Die On