THE BORIS JOHNSON SHOW Keeping the Show On the Road

In the second part of his profile on the Tory leadership favourite, Otto English explores Boris Johnson’s use of realpolitik in his drive towards grabbing the keys to No. 10

In March 2013, Boris Johnson appeared as a guest on the BBC‘s Andrew Marr Show.

The genial Marr had recently suffered a stroke so was taking an extended break from the Sunday morning sofa and, in his place, sat the political journalist Eddie Mair.

Johnson was then at the peak of his powers. Consecutive polls showed him to be the most popular politician in the UK.

So, on that Sunday morning in March 2013, he was probably looking forward to some banter and a subtle plug for his Prime Ministerial ambitions. Unfortunately for him, it was not to be.

As Johnson shifted uneasily in his chair, Mair took him apart.

Why had he made up a quote and been sacked from The Times? Why had he lied to Michael Howard about his affair with Petronella Wyatt? Why had he offered to supply Darius Guppy with the address of a News of the World journalist – so he could have him beaten up?

“Why don’t we talk about something else?” Johnson blustered.

That this unpredictable and unreliable chancer, who has spent a lifetime bluffing, lying, gambling, cheating and reversing his positions to suit his own ends should now be within grasp of Downing Street should terrify us all.

“Because this is about your integrity,” Mair shot back – adding: “you’re a nasty piece of work aren’t you?”

The ‘bicycle crash’ encounter showed that when Johnson was properly scrutinised, he fell apart. Subsequently, he and his team did everything they could to avoid broadcast interviews.

In any case, Johnson had come to realise that his Telegraph column was his platform in the same way that Twitter was Trump’s.

He didn’t need to subject himself to potentially hostile journalists. Via his journalism, he could have complete control over his message and his image. The Telegraph was his Pravda.

As the 2015 General Election approached, Johnson had a problem.

He was now a middle aged man in a hurry.

Having just turned 50, he had at best 10 years and two General Elections left to become Prime Minister. And so, despite having promised 17 times that he would not run to be an MP while still at City Hall, he did what he always does and went back on his word.

Johnson won the Uxbridge seat and was now back at Westminster.

If Cameron wasn’t looking over his shoulder, he should have been. Pressure was growing for the Tories to deliver on a manifesto pledge to hold a referendum on membership of the EU and, in February 2016, Cameron announced that the contest would be held that June.

This posed something of a problem for Johnson: who to back?

It certainly wasn’t obvious, for despite having made a name for himself inventing stories about EU directives, he wasn’t a natural Eurosceptic.

His father Stanley had been an MEP and Johnson junior was in many ways your classic Eurotrash. He had spent his early childhood living in Brussels. His paternal great-grandfather was Turkish, while his mother’s family were of French and Jewish Russian descent.

As a former Mayor of London, he was acutely aware of the importance of EU membership for trade and commerce telling the FT in a revealing 2013 interview: “The real problem is the political signal that it sends, particularly the signal it sends to foreign investors.” 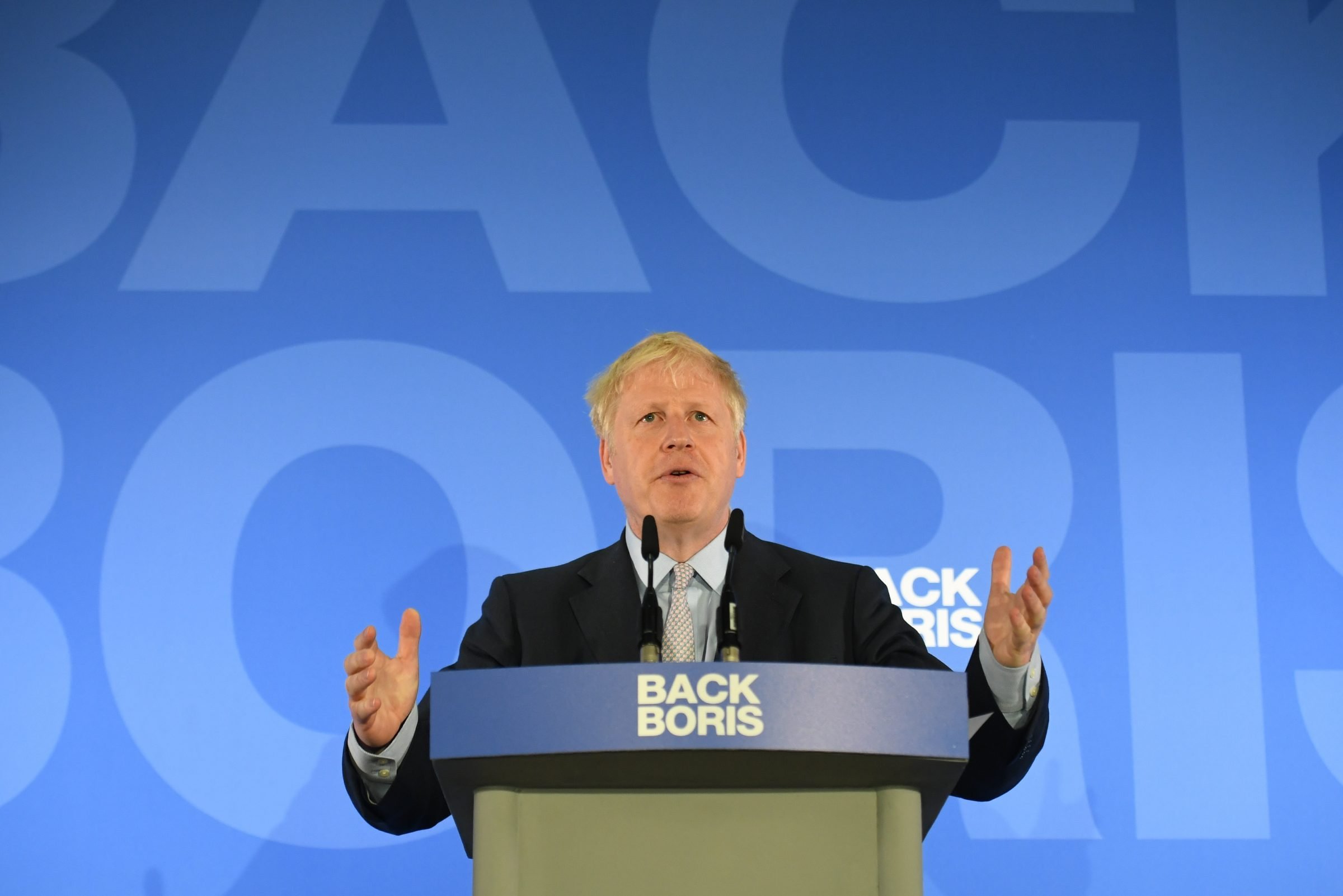 THE BORIS JOHNSON SHOWA Role on which the Curtain Never Falls

Johnson had once even made a convincing case for Turkey joining the EU.

But, principle was nothing when set against his ambition.

When you are rich and pampered, when you have never lived outside the cloisters of wealth, privilege and open doors, you can treat life like a game.

He weighed his options.

By backing Remain, he had nothing much to gain beyond a show of loyalty to a man he clearly despised.

By backing Leave, he had a chance to play directly to the Eurosceptic grassroots of the Tory party. If the country voted to stay in the EU, as everyone then predicted, he would have set out his stall for any future leadership bid and won the hearts of the EU loathing rank-and-file.

But it got better.

If Leave won then Cameron would be toast anyway – leaving a vacancy with a Boris- sized space at the top.

He had nothing to lose and having written both a Remain and Leave case for his Telegraph column, fired off the ‘Brexit’ one to his editor.

I need hardly tell you what happened next.

He posed in front of buses. He warned about the dangers of Turkey joining the EU, despite having said the exact opposite less than a decade before. He hammered home the benefits of Brexit. And, he sat back and watched the country burn.

Only, once Cameron had fallen, things didn’t go quite the way Johnson had planned. He didn’t get the gig.

But all was not lost. Once May came to power, he got the Foreign Office instead. Five of the last twelve Prime Ministers have been Foreign Secretary first and it can provide a superb platform on which to prove leadership mettle on the world stage.

But, Boris f*cked it up.

In fact, it’s not an understatement to say that, during his brief tenure, he was probably the worst Foreign Secretary in living memory.

Diplomacy was not his thing.

In 2016, he caused outrage by referring to Africa as “that country” before suggesting that the continent would benefit from the old colonial masters interfering once more.

This is about your integrity… you’re a nasty piece of work aren’t you?

A year later, he implied that Libya could be the next UAE, but only once the country had “cleared the dead bodies away”.

During a visit to Myanmar, he thought it appropriate to recite a colonial era Kipling poem in one of the country’s most sacred temples.

In India, he invoked the Nazis and implied that the EU wished to impose “punishment beatings” on the UK.

At a Foreign Office reception in 2018 to celebrate the Queen’s birthday, he shocked foreign dignitaries by responding to a question about post-Brexit trade concerns by saying: “F*ck business”.

Foreign counterparts reported that he was hopelessly ill-prepared, that he hadn’t done the most basic homework, that he was pompous, unguarded, rude and embarrassing.

But, if making Britain a bigger laughing stock than it was already was bad enough, he also demonstrated that, by being given great power, he could show great irresponsibility.

During a select committee hearing in 2017, Johnson wrongly claimed that Nazanin Zaghari-Ratcliffe, the British mother currently imprisoned in Iran, had been training journalists in the country before she was arrested. It was a disaster for Mrs Zaghari-Ratcliffe who was immediately hauled in front of an Iranian judge and told that her sentence would likely be doubled.

His disregard for her safety and the concerns of her family should have led to him tendering his resignation. But, Boris Johnson runs on Boris Johnson rules. He only quit as Foreign Secretary when he thought it might bring Theresa May down.

That this unpredictable and unreliable chancer, who has spent a lifetime bluffing, lying, gambling, cheating and reversing his positions to suit his own ends should now be within grasp of Downing Street should terrify us all.

The thought of Boris Johnson with his finger on the nuclear trigger is worrying enough, but he will also be charged with navigating us through the most hazardous waters that the UK has faced since the Second World War. That perhaps, should frighten us even more.