It seems like decades ago but, in February this year, our then Prime Minister Boris Johnson launched a major UK business initiative. “PM assembles new cohort of business leaders to turbocharge UK economy,” was the press release headline. The creation of this new Business Council was intended to celebrate “the two-year anniversary of Getting Brexit Done. ”

You missed that one? Don’t worry. So did everyone else. It gained barely a mention in the serious business media.

In March a very senior City grandee with four decades of experience in business and Government said to me: “By chance, I happened to be with a senior Treasury person the day this Boris initiative was announced. He had heard nothing whatsoever about it, which says all you need to know about its chances of success.” He described the plan as “dismal boosterism”. “Frankly, I wouldn’t want to have anything to do with this lot at the moment. They lack seriousness,” he said.

If it could be possible, things then took a turn for the worse after Johnson’s removal. The Kamikazee actions of Truss and Kwarteng in their September spending review were found to be even more lacking in seriousness. They were plain stupid. Indeed, the subsequent crisis in government bonds and a sharp drop in the value of the pound even led to the creation of a new Tory trope –  the UK’s Moron Premium.

To say that the vast majority of business leaders, large, medium and small, think very little of the current regime is an understatement. The best most can come up with is that Rishi Sunak is bailing water just about fast enough to keep a ship of state afloat that his four predecessors holed in multiple places below the waterline.

A schism occurred during the Brexit referendum that has not been mended. Any business person who dared vocalise Remain arguments was cast into the outer darkness for “moaning.”  It is not easy to find business enthusiasts for our current government or a clutch of prime ministers whose most famous utterance about those who toil in commerce was “Fuck business.” Never mind the fact that business creates jobs, wealth, and pays vast sums in taxes. Fuck them.

Few business people are very ideological. They are, by their very nature, pragmatic and opportunistic, and leave ideology to the Leninists on the one hand and swivel-eyed members of the ERG on the other.  They try to keep their staff happy and productive, they pay the VAT bill, they struggle day in and day out to find customers and, with luck, hang onto them.

Very few pre-2016 were significantly cheesed off about the Uk’s “sovereignty deficit”. They did, however, quite like having  450 million customers on their doorstep to whom they could sell easily and the ability to recruit people from Budapest, Barcelona and Berlin to keep them properly staffed. (And these EU citizens were not just baristas and cleaners – a significant proportion of the skilled workforce in say, Cowley, Oxford making Minis for BMW, were Europeans. But never mind:  BMW is now ending electric Mini production in Oxford and sending it to China.)

This same pragmatism meant they realised that selling to someone in Calais was always going to be easier than to someone else in Canberra.

While retail behemoths like Tesco have managed and absorbed the increased costs and difficulty of exporting to and importing from Europe many SMEs cannot and have just given up. Breweries, cheese makers, and small engineering shops all have thrown in the towel. This sand in the gears of UK business is, without doubt, a significant factor in our current recession, whatever lies Rees-Mogg tells you.

The Centre for European Reform has estimated that Brexit had, by the end of 2021, reduced trade in goods between the UK and the EU by 13.6% and left UK GDP 5.2% lower than it would have been had the UK stayed in the EU single market. The CER puts the Brexit hit to overall investment in the UK economy at 13.6%

To run a successful business takes common sense and competence. What most business people loathe about the Tories at the moment is a lack of competence. An inability to get the basics right.

In the second week of December around 400 business people gathered for a day-long conference at Canary Wharf in London’s Docklands. It was organised by Labour and politicians addressing them included Keir Starmer, Angela Rayner and  Rachel Reeves, the shadow chancellor.

They made the right sort of noises but Labour is showing very little political courage when it comes to our ongoing relationship with the EU. Rejoining the EU’s single market would not help UK economic growth, Starmer has argued, saying it would create “years of uncertainty” for UK businesses.

The Labour leader is not being honest about the impact of Britain’s decision to leave the EU, writes Adam Bienkov 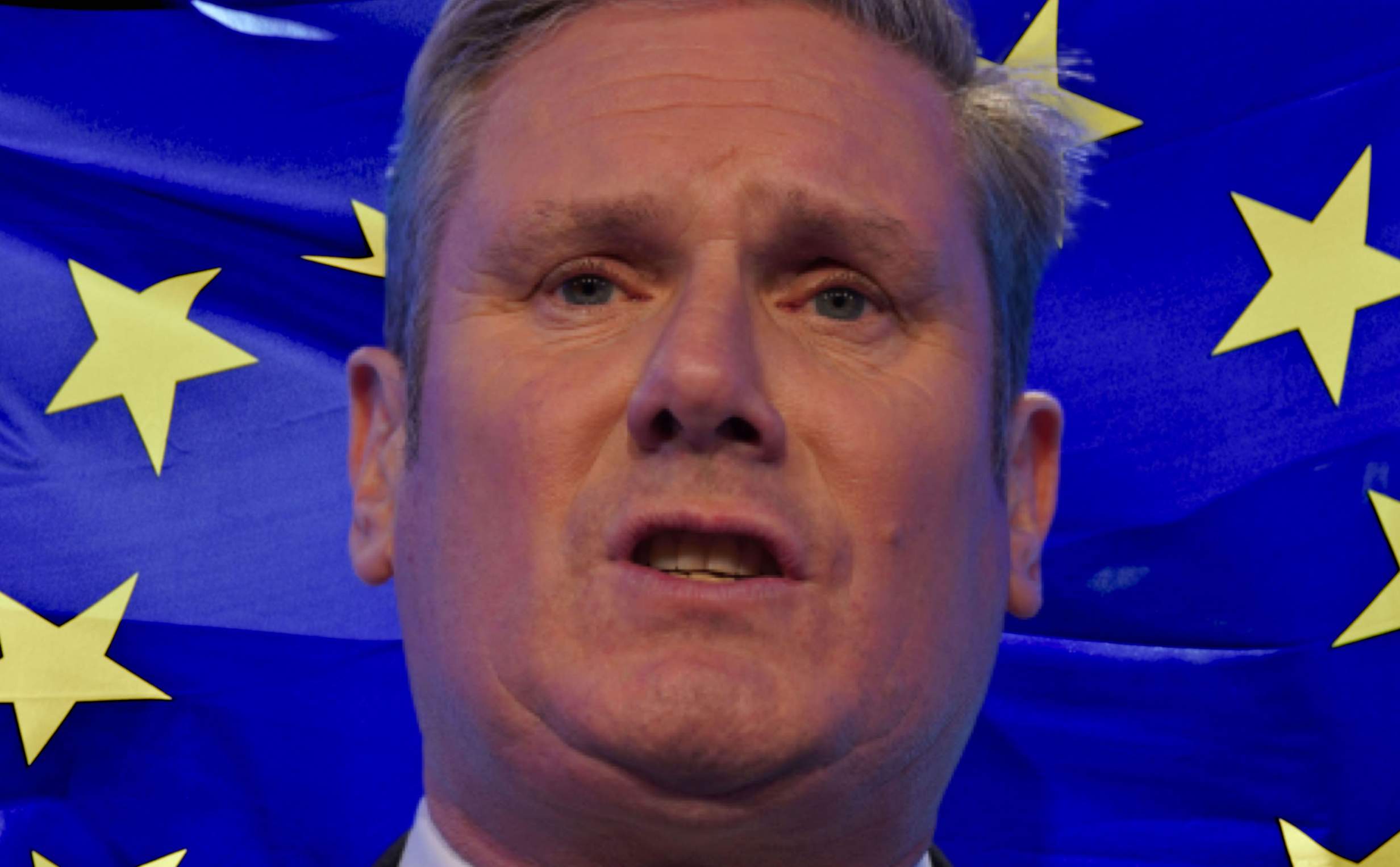 The paradox here is that we’re living through a period where businesses have perforce become far more politicized. Business and government occupy increasingly common ground. The challenge of climate change will require the public and private to work together across the globe to fix.  The Environmental, Social and Governance standards for socially conscious investors have meant that the agenda for business has become far broader and fuzzier – and more difficult to negotiate – than it was even twenty years ago. It means that business people need to act more like competent and enlightened politicians, and forget the single issue of maximising shareholder return.

The ex-Unilever CEO Paul Polman – the golden boy of purpose-led business –  makes it clear that he thinks if the world’s problems cannot be solved by government then business should step up to the task.

“The political system that has been designed to deal with global issues dates from the time of Bretton Woods…This was in 1944 when 80% of the global wealth was in Europe and the US… Now we can be cynical about politicians, we can be mad about them, we can laugh at them but that doesn’t serve anything, we have to fill that void,” said Polman. (Perhaps he should stand for office and bring some businesslike rigour to the job – he once considered running for the priesthood).

In the meantime, consider this. One pound sterling was worth 1.48 US dollars on 23 June 2016, the day of the Brexit referendum. The following day that value plummeted to 1.36 dollars. Yesterday a pound was buying 1.23 dollars having fallen as low as 1.06 during September’s madness. That amounts to a loss of over 20% of the pound’s value against the dollar since 2016. This is a measure of confidence in the UK economy.

We await that Brexit dividend. So far the only way in which we have diverged from EU “red tape” in search of economic success has been to allow unlimited bankers’ bonuses which are being distributed around now.

‘An Idea as Old as Time’: How a Single Rail of Warm Clothes for Homeless People has Grown

Stefan Simanowitz, 9 December 2022
Stefan Simanowitz explains how an old idea of neighbourly sharing has blossomed into a cold-weather initiative that has spread through grassroots support 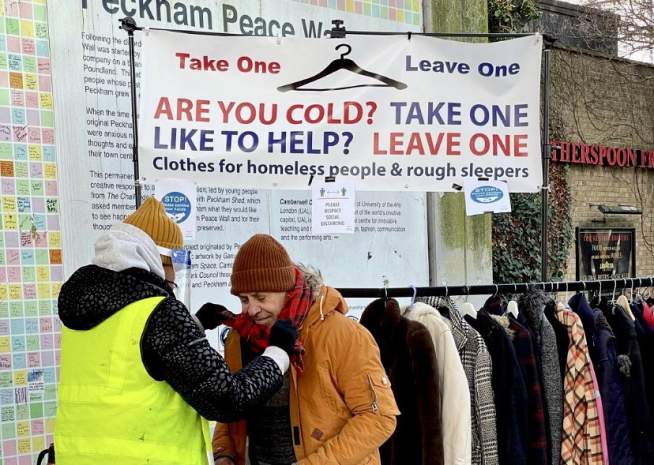