It’s two months since the US Supreme Court ended the nationwide right to abortion, and the horror stories are already piling up. Worse is yet to come, reports Sian Norris

It’s now two months since the US Supreme Court decided on Dobbs v Jackson’s Women’s Health Organisation – a case on abortion rights that ultimately overruled Roe v Wade, the 1973 decision that allowed for nationwide access to safe and legal terminations.

The Dobbs decision was written by the conservative Justice Samuel Alito, and allows for abortion laws to be made at a state, rather than federal level. Within the first two months, nine states have implemented bans on abortion – some, like Missouri, within 24 hours. It, along with Alabama, Arkansas, Kentucky, Louisiana, Mississippi, Missouri, Oklahoma, and South Dakota have outlawed abortion in all cases, including when the pregnancy is a result of rape or incest.

Today, the total goes up to 11, as Tennessee, Idaho and Texas enact ‘trigger laws’ that introduce outright bans. Previously, abortion was permitted up to six weeks, as it is in Ohio and Georgia. Florida has banned abortion after 15 weeks; Utah after 18 weeks; North Carolina after 20 weeks. Indiana lawmakers have passed a near-total ban on abortion with exceptions for some cases of rape, incest, or fatal foetal abnormality, or to preserve the life or health of the woman, that will come in on 15 September.

“Millions more people will lose abortion access across the nation as bans take effect in Texas, Tennessee, and Idaho,” said Nancy Northup, President and CEO of the Centre for Reproductive Rights. “Vast swaths of the nation, especially in the South and Midwest, are now abortion deserts that, for many, will be impossible to escape”.

Abortion bans don’t stop women from ending an unwanted pregnancy, they just prevent women from doing so safely. While there have been no reports from the US yet of women dying as a result of either unsafe abortion, or after being denied a life-saving termination, those numbers will start to come in soon.

We know this because even in developed countries where bans on abortion exist, women die. This month it was revealed a fourth woman in Poland had died after being denied life-saving reproductive healthcare after having a miscarriage and developing sepsis in the fifth month of pregnancy. Justyna, who died in 2020, joins Izabela Sajbor, Agnieszka T and Ana – the four died last year after the country extended its abortion ban to include foetal anomaly. Abortion is only allowed in cases of rape and incest, or threat to the mother’s life.

In 2012, Savita Halappanavar died in Galway, Ireland, having been told she could not have an abortion despite life-threatening complications, until the foetal heartbeat stopped. In response to her requests for help, the nurse told her and her husband: “this is a Catholic country”.

Around the world, unsafe abortion due to lack of safe and legal access causes 13.4% of maternal deaths each year.

The states banning abortion therefore have to face up to the fact that women and girls will soon start to die. There is nothing special about their laws, nothing unique about the United States that means it will escape the inevitable deaths that follow abortion bans. Women died in the US before Roe and they will die again. Women die in Poland, they died in Ireland, they die in El Salvador and in Kenya. They will die in Oklahoma, Missouri, and Wisconsin, and they will die in other states too.

Too Immature for Abortion, Mature Enough to be a Mom

While, thankfully, we have not yet heard of any deaths, there have been multiple reports of tragic cases where girls who are still children themselves are either being forced to carry a pregnancy to term, or flown out of state for emergency procedures. Other cases involve women with fatal foetal abnormalities having no choice but to continue an unviable pregnancy.

In the Sunshine State, where children’s dreams come to life at Disneyworld, a court decided a 16-year-old girl with no parents herself is “too immature” to have an abortion and must therefore continue the pregnancy. This is because, as well as the 15-week upper time limit, the state has parental consent laws which mean a minor must have permission to access reproductive healthcare. The court has taken on that parental role and sees no hypocrisy in deciding a child cannot meaningfully consent to a safe and, until recently, legal procedure – but is grown up enough to endure the trauma of forced childbirth.

Within days of the Dobbs decision, a 10-year-old girl who had been raped was denied an abortion in Ohio and had to fly to Indiana. Her pain and trauma was compounded by a conspiracy theory that claimed she was fictional – a character invented by the pro-abortion movement.

Jim Bopp, from National Right to Life, told Politico that if it were up to him “she would have had the baby, and as many women who have had babies as a result of rape, we would hope that she would understand the reason and ultimately the benefit of having the child”.

In Louisiana, Nancy Davis has had to cope with the devastating news that her pregnancy is non-viable and was denied an abortion in her home state, meaning she must travel out of state or continue her pregnancy for six more months knowing her child will die.

In the days following Dobbs, 22-year-old Madison Underwood had her abortion cancelled in Tennessee, which banned abortion after six weeks of pregancy. She too had a fatal foetal abnormality.

Elizabeth Weller in Texas had to wait for a panel to approve her right to end a life-threatening pregnancy at 18-weeks after suffering premature rupture of membranes which meant she was left with very little amniotic fluid. Her other option was to wait, at the risk of developing an uterine infection called chorioamnionitis, and have the baby at 24-weeks in the hope it would survive. The chances of survival were scarce due to the loss of amniotic fluid.

“Evidence is already mounting of women being turned away despite needing urgent, and in some cases life-saving, medical care,” said Northup. “This unfolding public health crisis will only continue to get worse. We will see more and more of these harrowing situations, and once state legislatures reconvene in January, we will see even more states implement abortion bans and novel laws criminalising abortion providers, pregnant people, and those who help them”. 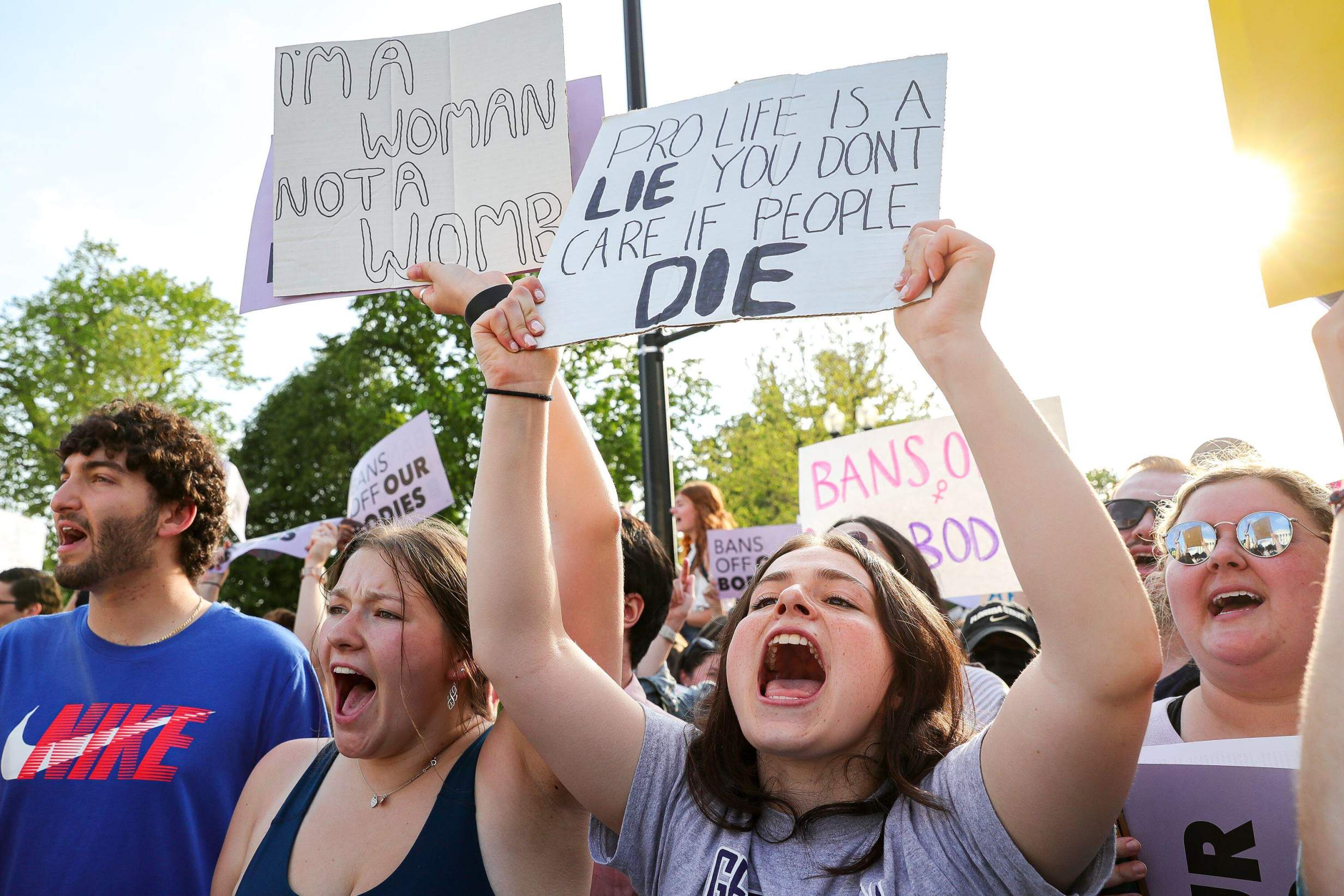 Already doctors are talking about the lack of clarity around what constitutes a threat to the mother’s life in cases like Weller’s, and the fear that if they don’t wait until the foetal heartbeat has stopped then they are at risk of performing an “illegal abortion”. It is these waits that kill.

This was the case for another woman in Texas who started to miscarry and developed a dangerous womb infection. The foetus still had signs of a heartbeat, so an immediate abortion was illegal under Texas law.

“We physically watched [the patient] get sicker and sicker and sicker,” Dr Jessian Munoz told Associated Press. It was not until the foetal heartbeat stopped the next day that “we could intervene”. Munoz explained how the patient developed complications, required surgery, lost litres of blood and had to be put on a breathing machine “all because we were essentially 24 hours behind.’’

And it’s not just doctors having these conversations. In a startling testimony, South Carolina’s Republican Rep. Neal Collins explained how he voted for the “foetal heartbeat bill”, only to realise now that his decision is putting women at risk of dying from sepsis, or losing her uterus.

One wonders why Collins had not considered the risks to women’s lives before the vote.

And, of course, there will be millions of women who simply did not want to be pregnant but who will be made to go through the trauma of forced pregnancy and birth. These are women and girls who have had their human rights stripped away from them by a court made up of six men and three women – of which two men had been accused of sexual harassment and sexual assault.