Three years ago, Nafeez Ahmed predicted the world could plunge into a long-term global food catastrophe triggered by climate-driven droughts in Asia. Now scientists are warning this could be a precursor to a ‘global polycrisis’

In mid-May, India unexpectedly announced a ban on wheat exports exactly when the entire world was counting on South Asia to alleviate supply shortfalls in the wake of Russia’s war in Ukraine. As the world’s second-largest wheat producer and seventh-largest maize producer, India is recognised as a critical breadbasket region.

While the Ukraine crisis has played a key role in the global food crisis by taking large quantities of Russian and Ukrainian wheat supplies out of the equation, this was only the trigger for a food crisis already well on its way.

In 2019, I predicted an imminent global food crisis due to a drought-cycle in Asia that would begin around 2022, based on analysis of a range of climate models and scientific literature.

The analysis showed that continued ‘business as usual’ carbon emissions were on track to trigger major water scarcity across Asia that would lead to grain supply shortfalls. That, in turn, would spark the onset of a global food crisis that could, at worst, last a decade if not longer.

War in Ukraine has compounded this by eliminating already strained safety nets in the global system, with multiple breadbasket regions failing simultaneously due to both climate impacts and the outbreak of conflict.

In 2019, I wrote about a little-known 2012 study led by a lead author of the United Nations Intergovernmental Panel on Climate Change. It warned that large parts of Asia responsible for producing much of the world’s wheat and maize would experience severe droughts within 10 years.

Twelve different climate models examined showed that, after the early 2020s, droughts across Asia would last on average longer than three months and become more than twice as severe. India would be most affected – along with China, Pakistan and Turkey. “The increased drought risk is an imminent threat to food security on a global scale,” the report said.

I wrote that, if the analysis was accurate, “the risk of climate-induced droughts in parts of Asia triggering a global food crisis could start to become acute as early as 2022”.

Observers have described the heatwave currently gripping South Asia as “mind-boggling” in its scale and intensity, with more than a billion people in India and Pakistan enduring daytime highs of 40°C. In some areas, people experience 50°C temperatures – the temperature at which the body begins to cook.

There are dramatic and intensifying implications for agriculture. Unprecedented regional drought has led to an estimated 10 to 15% of crops to fail.

The current heatwave across Asia is consistent with a larger pattern. Last year, a paper by Indian scientists noted that more than 600 million people in India already face “high to extreme water stress”.

It warned that continued changes in rainfall due to climate change “will have a negative impact on agricultural production” and that yield losses could be as high as 28 to 74% in rice and 15 to 80% in wheat. “These drawbacks shall have an adverse impact on the nation’s economic growth and GDP,” it said.

The most recent World Bank data shows that, from 1962 to 2018, India’s internal renewable freshwater availability per capita had collapsed by a colossal 65% – from 3,083 cubic metres to 1,069 cubic metres. This rate of decline suggests that India is now dipping below the 1,000 cubic metres threshold for water scarcity. 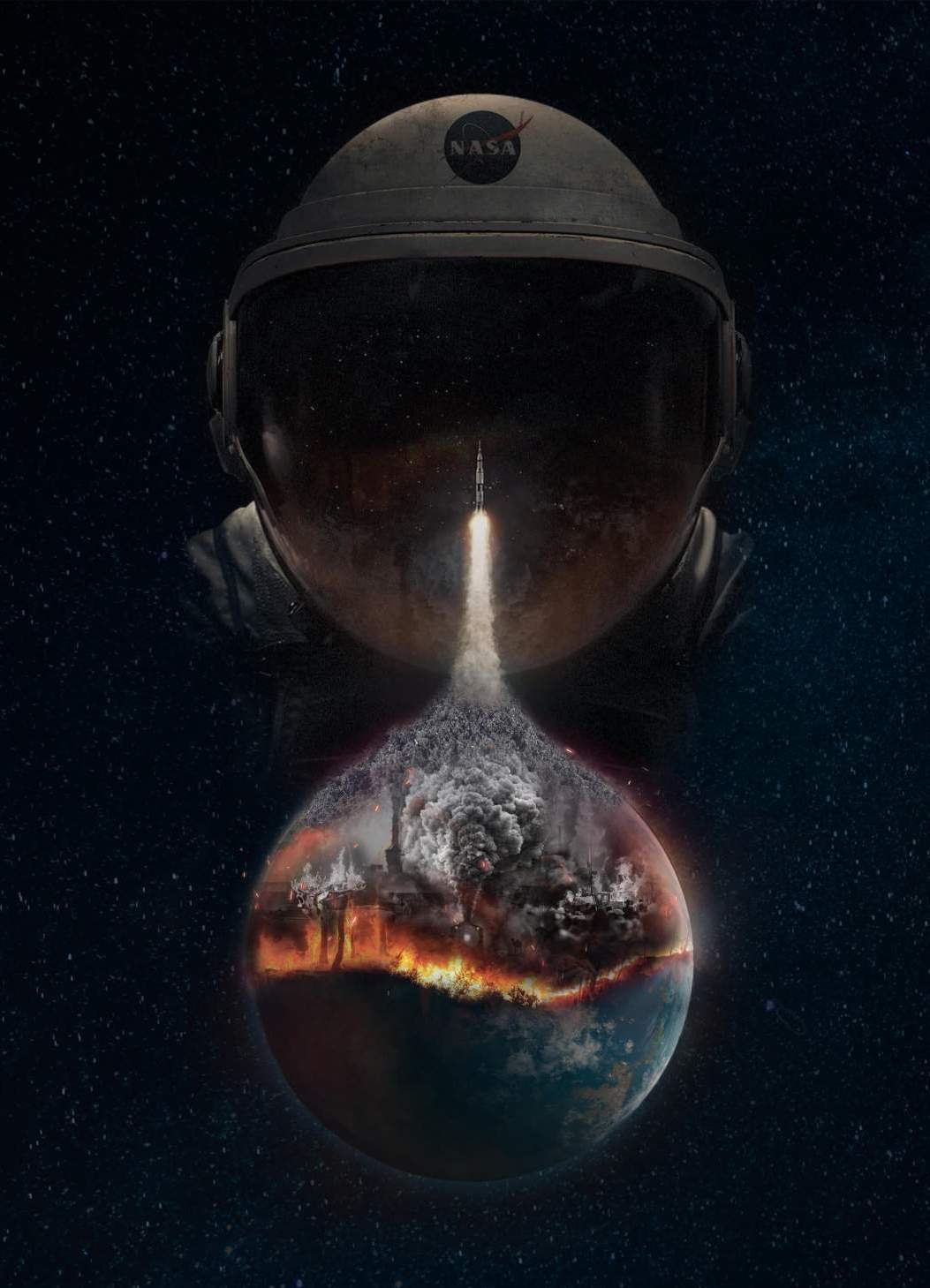 In 2016, I reported on a detailed simulation of a global food crisis scenario that was being run by the CNA Corporation, a US military-funded think tank with close ties to the Pentagon. The simulation explored a ‘food chain reaction’ scenario in which a global food crisis linked to expanding drought conditions ends up lasting as long as a decade, with food prices spiking by 395%. Most documents relating to the simulation are no longer publicly available, except a final report outlining its findings.

Some of its details bear similarity to events unfolding today.

The scenario begins in 2020 with a reasonably healthy global economy and oil prices that rebound to $75 a barrel. Food prices climb steadily due to “weather-related disruptions to agricultural production” affecting south and south-east Asia, Australia, and north America. Global crop production falls 1% short of expectations leading to decreases in stock and further modest price increases.

Then, after 2023, the world is hit by a series of droughts and heatwaves in India, China, Russia and Ukraine. This coincides with oil prices rapidly rising to above $100 a barrel.

By 2024, heatwaves expand into EU countries, exacerbating global food shortages and price spikes. The confluence of these events trigger widespread social unrest and economic crisis, lasting until around 2027. Although the food system pressures are temporarily ameliorated, a renewed cycle of crisis erupts from 2028 to 2030 due to a further series of climate-induced events, including droughts in India and China.

While Russia and Ukraine have not been hit by catastrophic drought conditions this year, the outbreak of regional conflict has had a similar impact in diminishing their contribution to global food supplies and driving up oil prices.

And, from 2018 to 2020, Europe did experience a series of unprecedented hot and dry weather conditions – the most intense drought event in Europe for the last 250 years. Europe is now likely to experience longer and more intense multi-year droughts as climate change worsens, along with other breadbasket regions.

This scenario was not supposed to be a prediction, but an exercise exploring worst-case possibilities. Yet, as its assumptions were plausible, its exploration of the challenges ahead show that, without a change of direction, global drought and hunger could become the epicentre of global instability between now and 2030.

Narrow thinking has led many to assume that the fundamental cause of the global food crisis is the war in Ukraine. The reality is quite different. Russia’s invasion has merely compounded a global systemic crisis that was already unfolding.

As Byline Times has previously revealed, the war in Ukraine is intimately connected to the climate crisis. Scientific studies close to Russian political and economic elites consistently saw global ‘net zero’ climate action and technology disruptions (such as electric cars) as an existential threat to Russia’s fossil fuel export economy.

He has shown that the tightly-coupled nature of global systems means that “multiple stressors” can interact to create “simultaneous shifts” which can generate “a far larger intersystemic crisis”. That can then “rapidly propagate across multiple system boundaries to the global scale”.

When this happens, the capacity of our systems to respond effectively to the crisis can rapidly diminish. Because, instead of having to deal with one, silo-ed crisis – which is what our institutions are designed to do – they become overwhelmed by the cascading effects of multiple social, economic and biophysical systems failing simultaneously.

Homer-Dixon and his team at the Cascade Institute at Royal Roads University in Canada, argue that what we experiencing is a “global polycrisis” – or a simultaneous outbreak of multiple “global polycrises”.

Homer-Dixon has defined a global polycrisis as “a single, macro-crisis of interconnected, runaway failures of Earth’s vital natural and social systems that irreversibly degrades humanity’s prospects”.

The Cascade Institute warns that the accelerating speed and intensifying scale of multiple overlapping risks could culminate in such a global polycrisis – with potential outcomes including: growing unrest and anti-democratic populism in liberal democracies, civil unrest in poor countries, the reversal of economic and political globalisation, and a collapse of global climate stability.

In May, an expert panel convened by the Institute noted how the Ukraine crisis has exacerbated the risk of a global polycrisis. It pointed out that there has been a 25% increase in hungry people over the past 12 months – a trend which, while visible before the Russian invasion, has now worsened.

But, while there is much cause for alarm, there are also grounds for hope. The panel concluded that “these disruptions could serve as a potential ‘transformational moment’ for the global food system” and that “today’s acute food supply issues exacerbated by the Ukraine-Russia war, while extremely harmful in the short-term, could spur a closer alignment of the global food system with human dietary needs and greenhouse gas reduction target”.