Martin Shaw explains why a softer Norway-style Brexit was derailed by Boris Johnson’s anti-immigrant rhetoric, and how the tide may be slowly turning

In his bid to retain power, Boris Johnson told Conservative MPs that his victory would prevent a reopening of the UK’s membership of the European single market which would follow his defeat. This was a reference to the proposal by Tobias Ellwood, one of his critics, to deal with the mounting problems of Brexit (plummeting trade, damage to agriculture, a looming trade war over the Northern Ireland protocol): “All these challenges would disappear if we dare to advance our Brexit model by rejoining the EU single market (the Norway model),” Ellwood argued.

It has to be said that none of the other 147 MPs who voted against Johnson endorsed Ellwood’s idea. Tom Tugendhat, the leadership hopeful of what passes for the Conservatives’ ‘liberal’ wing, was one of the first to disagree, while Mark Harper, chair of the parliamentary Covid-deniers and another probable contender, slapped him down: “The UK voted to leave the EU. That meant leaving the Single Market and putting an end to freedom of movement. The end.”

Yet Ellwood is manifestly right. Leaving the EU itself ended Britain’s participation in the union of peaceful European democracies just when it was threatened by far-right reaction within and without. But it was leaving the single market which caused the most economic damage and created the intractable difficulties in Great Britain-Northern Ireland relations. Ending freedom of movement, one of the market’s four main pillars, has contributed seriously to these harms.

Why the UK Left the Single Market

Formally, leaving the single market was not a necessary consequence of leaving the EU; it was not on the ballot paper in 2016. In principle, it was possible for the UK to retain many of the benefits of European integration through the ‘Norway option’ which enabled non-EU states to be part of the market, an idea which Leavers from Nigel Farage to Johnson had flirted with at times, and which had been central to the only serious economic prospectus for Brexit. Yet this was comprehensively rejected by Theresa May’s government and lost out in the hung parliament of 2017-19.

Harper’s comments help explain why this happened, and why the idea of reviving the UK’s single market membership will arouse fierce resistance on the right.

Ending freedom of movement was not most Tory Leavers’ original motivation; many prioritised undiluted national sovereignty and a surprising number the ability to make independent trade deals. But these were not ideas which aroused mass support. Instead, as Farage and UKIP showed over a decade, it was only when leaving the EU was linked to anti-immigration politics that it became popular. His argument was that the EU’s freedom of movement had allowed the mass immigration of East Europeans; his slogan ‘Take Back Control’ echoed ‘immigration control’.

The key to understanding the single market issue is that in the referendum, the Vote Leave campaign led by Conservatives including Johnson and Michael Gove took over UKIP’s approach lock, stock and barrel – they even pinched Farage’s slogan although they kept their distance from the man himself. Under the direction of Dominic Cummings, they used extensive racist propaganda, strongly echoed by the Tory press, to mobilise a coalition of mainly anti-immigrant and outright racist voters and push Leave over the line. This development of the campaign was key to the intimidating atmosphere of its final weeks, which produced a wave of hate crime against Europeans, Blacks and gays as well as the murder of Jo Cox. 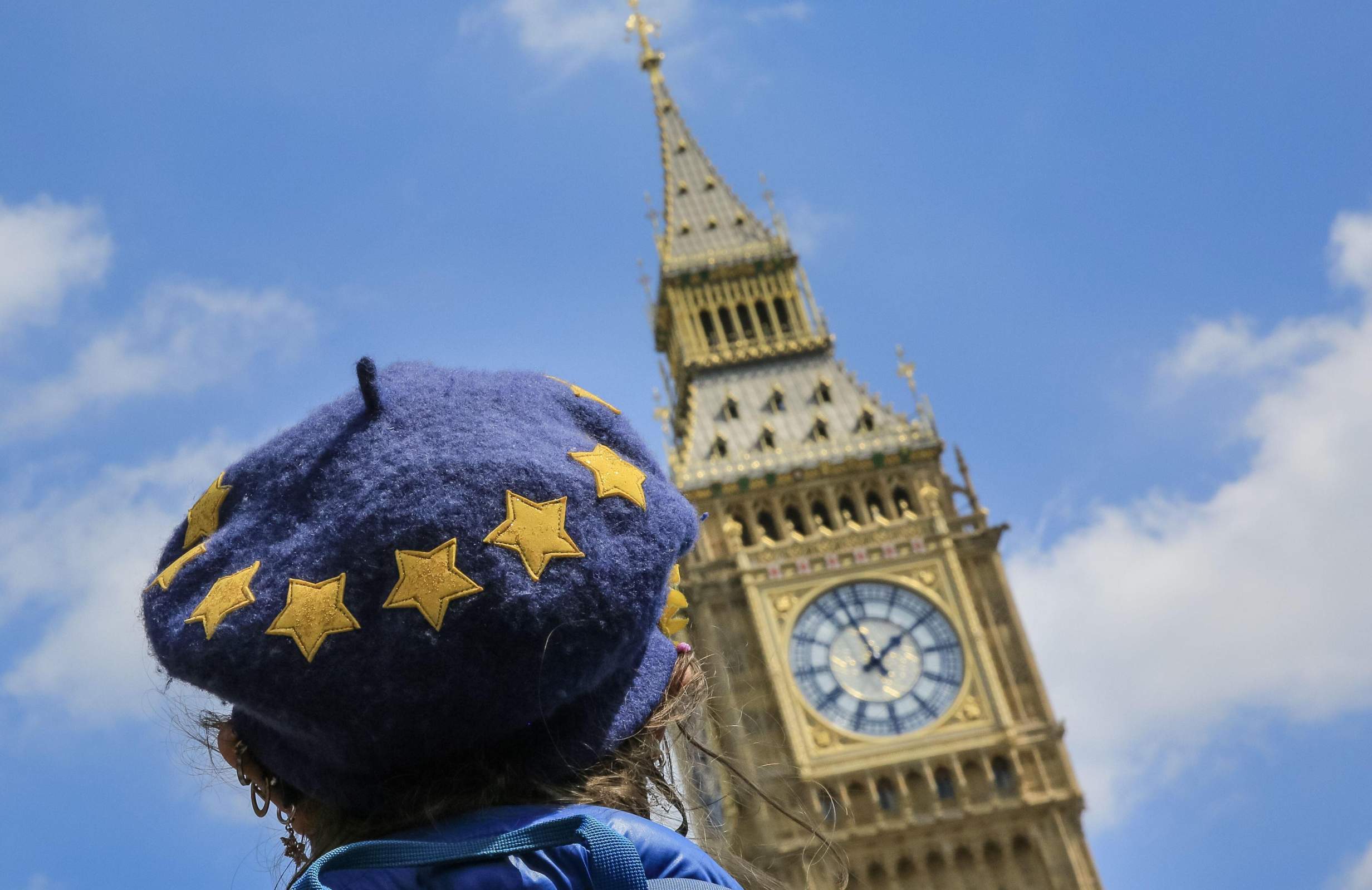 May’s insistence on the centrality of ending freedom of movement. “Let’s state one thing loud and clear”, she said in 2016, “we are not leaving the European Union only to give up control of immigration all over again.”  Her ‘letter to the nation’ in 2018 – “We will take back control of our borders, by putting an end to the free movement of people once and for all” – did not just reflect her personal views or her role in the hostile environment policy. Rather, the Leave victory transmitted this anti-immigrant climate of the referendum to the heart of her government.

Theoretically, Leave’s narrow 52:48 win pointed to a compromise soft Brexit. But politically the single market and freedom of movement were the last things that May (or any incoming Tory leader) could embrace in 2016-17. Retaining freedom of movement would have split the Tories and incited a Farage-UKIP revival, while ending it divided Labour. Johnson agreed; it was vital for the UK not to ‘surrender’ on immigration, he said as he resigned from May’s government the same year, going on to attack Muslim women in his drive for power.

The anti-immigrant symbolism of Brexit, reinforced by the new restrictions which came with the exit from the single market at the end of 2020, led to a substantial reversal of EU migration to the UK. This was the right’s greatest victory in six decades of anti-immigrant campaigning. With May’s and Johnson’s help, Farage’s campaign had succeeded where Enoch Powell’s 1968 call to slow and reverse Black migration had ended in failure.

Continuing Resistance to Freedom of Movement

This victory certainly shifted the ground of immigration politics. Johnson took advantage of it to quietly dispense with the net migration target which was such an embarrassment for Cameron and May. Even the compensating increase which is occurring in non-EU immigration has aroused little political attention, with the hostile campaigning of Migration Watch seeming increasingly irrelevant. Indeed liberal commentators emphasise that attitudes to immigration are now more positive than they have been for a long time.

As voters rue the Brexit bureaucracy that entangles them in all European contacts, while the losses of nurses, carers, airport and farm workers cause pressures that ministers struggle to explain away, could the time for rejoining the single market have come? There are, unfortunately, reasons for caution about such a conclusion, even if Johnson eventually goes. The weakness of anti-immigration attitudes has a lot to do with the disappearance of overt anti-immigrant campaigning and the fact that anti-immigrant voters believe they have won.

The political racism of the right and their press has not gone away; it has merely refocused on the soft, visible target of helpless Channel asylum seekers. Have Johnson and Priti Patel got their electoral interests wrong by pandering to this with their outrageous Rwanda scheme? While public attitudes to immigration have softened, British Future’s polling shows that 45 per cent, disproportionately among the Tory/Leave electorate, still want more controls.

Against this backdrop, Ellwood’s call may be a step too far not only for the Conservatives, but also for opposition parties which aim to appease residual Brexit supporters. Well before the referendum, prominent Labour politicians wanted to compromise on freedom of movement; afterwards, even the ‘anti-racist’ Jeremy Corbyn abandoned it along with the single market. Keir Starmer shows no interest in entering the new debate, while the Liberal Democrats, chastened by their 2019 failure, also seem wary. In choosing their candidate for the Tiverton by-election, they passed over members prominently associated with their pro-EU stance.

Rising to the Free Movement Challenge

Yet the road back to the single market cannot avoid the principle of free movement. There would be rich rewards in restoring this. Awareness of the restrictions that Brexit has imposed on British people is growing, while Europeans in the UK remain profoundly dissatisfied with the Settled Status scheme. As the failure of limited visa schemes has shown, European workers need more than short-term rights if they are to be attracted to the UK. Attitudes to free movement are much more positive when it is explained as a mutual benefit rather than a ‘threat’.

Since Johnson’s hold on power remains tenuous, the debate which Ellwood has re-ignited could find fertile ground in the coming months. However it requires a new boldness from liberals and the left. Campaigning for free movement will involve opening up the current balance of migration policy – a compromise on the far right’s terms – and confronting positions which have become entrenched in the political mainstream. To answer the objection that free movement merely advantages white Europeans, it must address the bureaucratic nightmares that the immigration and asylum systems create for non-EU migrants and refugees as well as those which have arisen from leaving the single market.

There will certainly be vigorous pushback, but this is a debate which cannot be suppressed as the momentum mounts to remove not just Johnson but the whole discredited Conservative party in the next two years.

Martin Shaw is a political sociologist and author of Political Racism: Brexit and Its Aftermath (Agenda 2022).