When Emmanuel* came to work in the UK, the conditions on the boat were the worst he had ever seen. Having grown up around fishing in Ghana, for him it was a way of life. But when he came to Northern Ireland in 2018, his positive perception of the industry was shattered. Emmanuel has since been registered as a victim of modern slavery. Now he can tell his story of how the UK immigration system drove him into human trafficking.

Like so many other fishermen, Emmanuel entered the UK on a transit visa; a loophole used by employers to bypass strict migration laws. When he flew the more than 3,000 miles from his home in Ghana, he was picked up at Belfast airport and taken straight to work on a boat. An experienced fisherman, Emmanuel was shocked to find the boat was not fit to go out to sea. He was even more surprised to learn that this is where he would have to live, eat, and sleep.

Despite his contract stating that he was assigned to one specific vessel, Emmanuel was quickly transferred to another. And then another. And then another. At times he would be transferred at midnight, not even knowing the name of the new vessel he was working on. Back home in Ghana, Emmanuel says he would have been given proper accommodation. Constantly living under the threat of being sent home or having his passport confiscated by his employer was psychologically damaging.

“You feel like you have been trapped on a boat where you don’t have any means to even say you want to leave,” he says. “You and your skipper only know what really happens on the boat.”

The UK’s strict post-Brexit immigration system is increasing the risk of exploitation for foreign fishermen. As part of the point-based system, most foreigners working in the UK must come on a skilled worker visa. Following lobbying from the industry, last April the Government opened up the visa to fishermen. But Byline Times can reveal that so far not a single visa has been granted to a fisherman.

Due to poor working conditions, long hours and low pay, fishing has become an unattractive occupation for young people in the UK. According to Alison Godfrey, deputy chief executive at the Fishermen’s Mission, “For a number of years, it has been hard to find Brits who want to fish. It is the most dangerous peacetime occupation. It doesn’t pay well and has long hours.”

With a decline in domestic and EU fishermen, the industry has become increasingly reliant on non-EEA workers like Emmanuel. According to a survey by the organisation Seafish – a government-funded body – around 35% of fishermen are not from the UK. Ghanaians and Filipinos represent the largest proportion of this figure.

Without access to skilled worker visas, fishermen enter the UK on a transit visa. These largely unregulated visas force workers to operate outside the UK’s territorial zone – meaning that any boat carrying transit visa workers should fish at a minimum of 12 nautical miles (the equivalent of around 14 miles) from domestic shorelines.

Sea conditions this far out are harsher, making it more dangerous for crews. And for fishing vessel owners in places like the west of Scotland, the shape of the coastline can make it difficult to even access these waters.

According to a new report by the International Transport Workers’ Federation (ITF), the transit visa is not designed to be used for fishermen, but for seafarers transiting through the UK to board vessels operating in international waters. But the report says that for the last 15 years, the transit visa has been used to systematically exploit foreign labour. 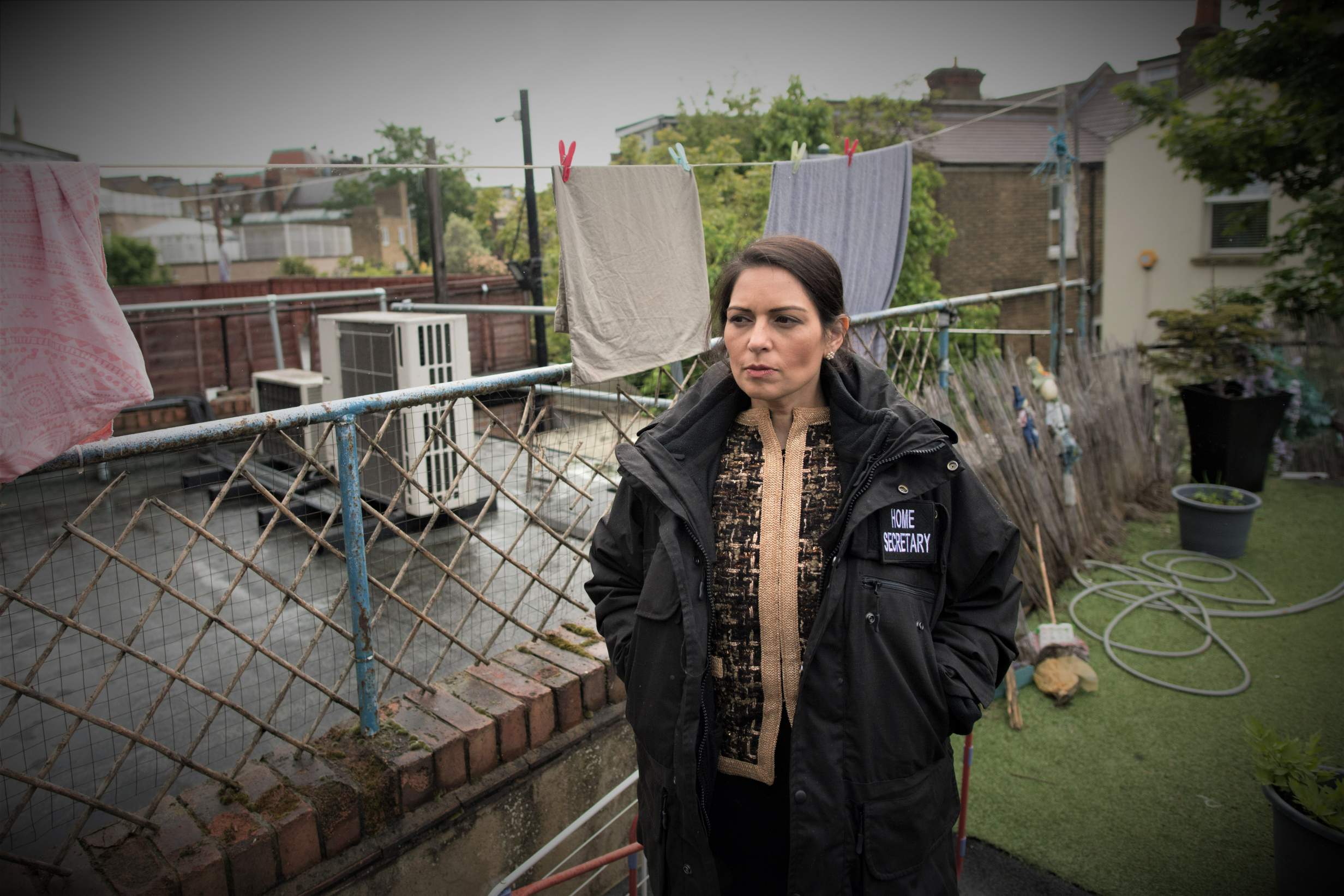 Some of them worked for a company with a well-documented history of exploitation. The fishermen described being verbally abused, underpaid, and threatened with deportation while working off British coastlines. They say captains used racist abuse against them and described feeling threatened. Some were even physically attacked.

In the UK if you are over the age of 23 and are working 40 hours a week, the minimum wage is £1,520 a month. The fishermen, who were usually working well over 40 hours, had contracts for as little as £700 a month – but in practice they were sometimes paid even less.

One fisherman, called James*, who still works in the UK, has been employed on vessels where there were no toilets or showers. Sometimes he has gone five days without a shower. Often the boats are small and dangerous to operate in bad weather. Despite these conditions, because he can only enter the UK on a transit visa, he must sleep and live on the boats that he is contracted to work on. The only time he can go ashore is to shop. With a family to feed back home, James has no choice but to continue working in the UK.

“It is so cold on board it can be minus one or two degrees, and you are living without a heater. If I had a visa, I could rent a house or a room and have heat,” he says.

These experiences substantiate the concerns of experts that the immigration system is driving workers into exploitation. Due to the Government’s ‘hostile environment’ policies, the risk of being deported is significant for migrant fishermen. This plays into the hands of exploitative employers who wield the threat of deportation. According to the ITF report, by criminalising fishermen violating immigration rules, the Government is increasing their vulnerability to exploitation.

It was recently reported that P&O ferries had replaced 800 UK staff with a crew of foreign seafarers who are to be paid £1.80 an hour. It is this same under-regulated system that allows fishermen to be exploited.

Vessels inside the territorial zone are meant to be regulated by the Maritime and Coastguard Agency (MCA). Even within this area, there is confusion among public authorities about who is responsible for regulation. Those vessels fishing outside the zone are subject to International Maritime Law and in this largely unregulated environment, fishermen are at even greater risk of exploitation.

“Any suspected employment issue on a vessel will be investigated fully by the MCA and a surveyor will conduct checks on any vessel that reportedly holds victims of human trafficking,” the MCA says. “If there is evidence which supports the suspicion of modern slavery or human trafficking, the MCA will work with other enforcement agencies (the police, Border Force etc.) to ensure action is taken. The MCA is strongly committed to halting human trafficking and being a part of the solution to prevent modern slavery.”

Skilled worker visas should ensure employees are paid properly. Workers over the age of 25 are guaranteed a minimum salary of £25,600, which is more than double the £12,000 or less the Ghanaian fishermen we spoke to were earning.

The biggest barrier facing fishermen seeking to obtain a skilled worker visa is the English language test. Harry Wick, CEO of the Northern Ireland Fish Producers’ Organisation, believes the test is unnecessarily hard as it requires fishermen to write to a level that does not match the requirements of the job. Many foreign fishermen can speak good enough English and have enough specialist language knowledge to safely work on vessels. But to pass the test can take years of learning English. This is time and money many fishermen do not have.

A Culture of Silence

It is because of the experiences suffered by the likes of Emmanuel and James that Chris Williams, from ITF, is advocating for skilled worker visas to be opened to more fishermen and for the transit visa loophole to be closed.

Williams has worked with several fishermen who have been exploited and says, “UK legislation is enabling conditions for forced labour and modern slavery.” He added: “The fishing industry is addicted to exploiting migrant labour and underpaying them.”

Freedom of Information data obtained from the Home Office by Byline Times reveals that a minimum of six fishermen were referred to the UK’s modern slavery referral mechanism in 2021. Data obtained from Scottish and Northern Irish police forces indicates that there were five cases in those countries.

In 2022, there have been four cases referred to the Northern Irish police. The true scale is hard to gauge because of the dangerous repercussions facing those willing to speak out. Not many people are willing to take the risk that Emmanuel has for fear of being blacklisted by the industry or even physically attacked.

Emmanuel believes that he was lured into trafficking through the transit visa system. A skilled worker visa would have ensured that he was paid above the minimum wage, received paid leave, and that he was assigned work he was contracted to do.

Because of his experiences, Emmanuel has given up fishing to work in the construction industry. He is not alone. Others back in Ghana are reluctant to work on UK fishing vessels at a time when the industry desperately needs skilled foreign labour.

“This experience has changed my perception of fishing, which back home is a noble profession”, Emmanuel told Byline Times. “I learnt my trade in fishing, so everything about me is fishing. But since coming to the UK and going through this I don’t want to go back to fishing. The people that work in the fishing industry in this country only think about profit, they don’t think about you.”

*Not his real name