Will this be Northern Ireland's Most Important Election Ever?

Northern Ireland is either set for a “decade of instability” or an “agenda for real change”.

These are the respective reactions from the DUP and Sinn Féin about the widely presumed outcome of tomorrow’s legislative election – that Sinn Féin will be the largest party.

Sinn Féin vice president Michelle O’Neil is thus set to become the First Minister, a post previously held only by Unionists, including the DUP since 2007.

For an Irish nationalist from a Catholic background, leading a party that was once the political wing of the IRA, this is a hugely symbolic moment in a province described as “a Protestant Parliament and Protestant State” by one of its founders.

Northern Ireland’s power-sharing system of government means that in practice Sinn Féin has already held the post of the joint first minister with the DUP for years.

But in a place where symbols are important, the switching of places in the First and Deputy posts has ‘symbolically and psychologically’ consequences, says Dr Katy Hayward, professor of Political Sociology at Queen’s University Belfast and a senior fellow of the UK in a Changing Europe thinktank.

“We can imagine that Irish nationalists will be greatly encouraged to see Sinn Féin as the largest party in the Assembly and that expectations of Irish unification will grow as a result of that”, she told Byline Times.

Perhaps more important is the psychological impact on Unionists.

“Even moderate unionists will recognise how symbolically significant it is that a party that doesn’t want Northern Ireland ultimately to exist is the largest party in the Northern Ireland legislature,” Hayward said.

Coming after Northern Ireland’s muted centenary celebrations last year, and with a Catholic majority predicated by the end of this year, Sinn Féin taking the First Minister post “will be noted as a critical moment for Northern Ireland”, she added.

DUP leader Jeffrey Donaldson has said such a victory would lead to the hastening of a vote on whether there is a united Ireland or Northern Ireland stays with the UK.

“There is nothing scarier, nothing more frightening than Sinn Féin having the most seats at Stormont”, a DUP spokesperson told the Belfast Newsletter this week. “If you vote for any party other than DUP you will get the advancement of a divisive” referendum on Irish unity.

While the possibility of holding such a vote is covered in the Good Friday Agreement, in reality, any such referendum is years away, and in the hands of the British government.

Support for Irish unity in Northern Ireland is around 30%, according to polls, and the combined nationalist vote of Sinn Féin and the smaller SDLP is around 40%.

Sinn Féin is acutely aware of this. They are looking at the long game, where they are expected to also be the largest party in the Republic of Ireland in the early 2025 elections there.

While Irish unity is still a central part of their platform, it has taken a backseat in this election to day-to-day issues such as the cost-of-living crisis.

“This is a moment in history”, O’Neill said in a recent televised debate, where she emphasised a Sinn Fein first minister would mean additional spending for the health service, and “money in your pocket” to offset rising costs.

The DUP knows that any unity referendum is not imminent, but are hoping to galvanise voters turned off by the party’s internal chaos and poor handling of Brexit.

While the DUP was the only major party to campaign for Brexit in the 2016 referendum, Northern Ireland as a whole voted to remain by 56%, due in part to being the only part of the UK with a land border with an EU country. Even a quarter of DUP voters didn’t support it, some of whom may have jumped ship to the Ulster Unionist Party or non-aligned Alliance party.

The DUP has not committed to forming a new government after the election. That is in part due to the prospect of a Sinn Fein First Minister, but also because they – like many unionist voters – want action on the Northern Ireland protocol.

Some sectors of the economy have been struggling since the post-Brexit trade barrier between Northern Ireland and the rest of the UK was implemented last year, particularly those small businesses that are dependent on supplies from Britain.

But the bigger concern is the symbolic one of having a “Union-subjugating” customs border within the United Kingdom, in the words of Loyalist campaigner Jamie Bryson, a major organiser of the anti-Protocol rallies that have taken place across Northern Ireland.

Yet while there is opposition to the protocol, unionist voters are also concerned the Northern Ireland economy, health service, and rising costs.

Northern Ireland has some of the poorest wards, worst rates of mental ill-health, and longest waiting hospital lists, in the UK.

Therefore the DUP are taking a gamble with their approach in this election. 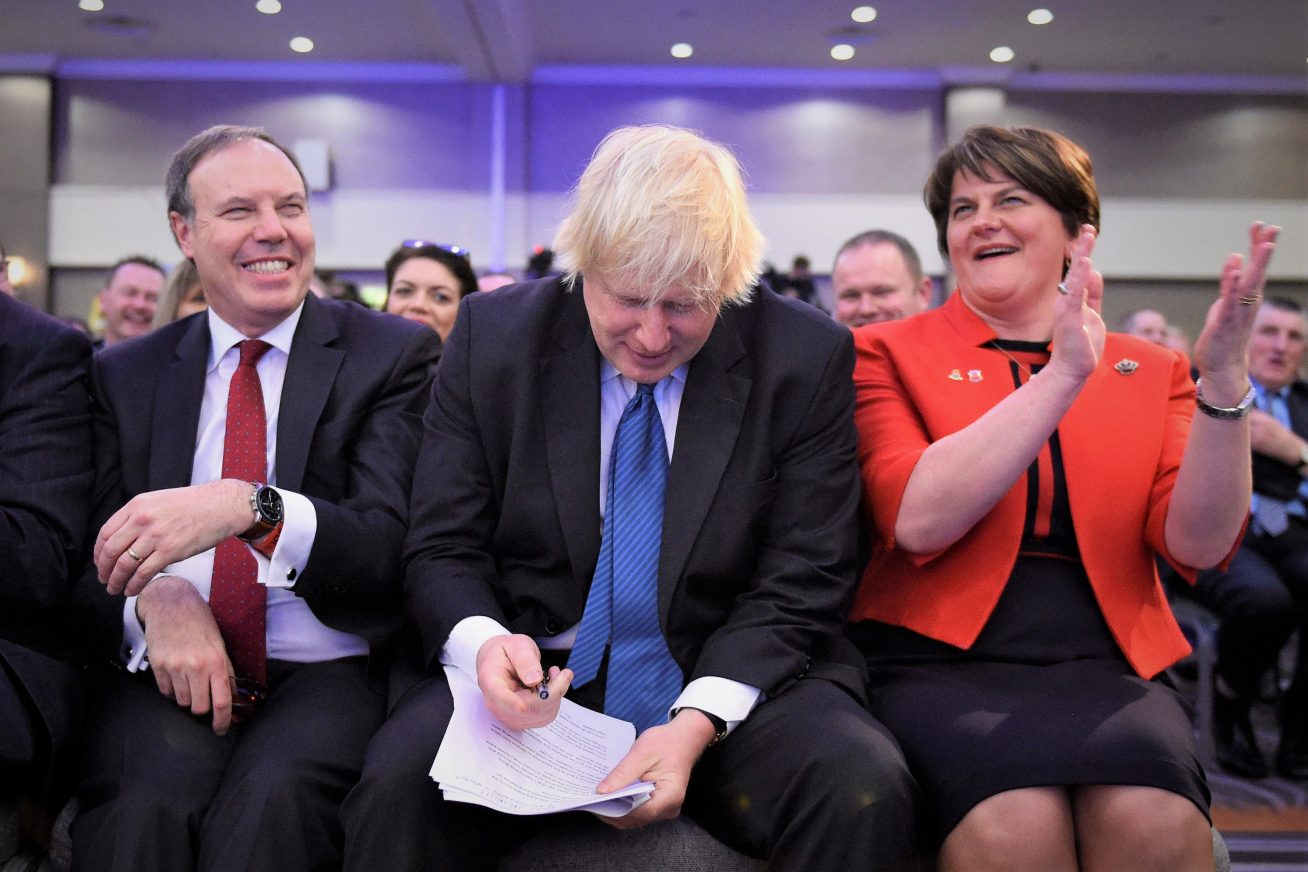 Voters may go to the UUP – who oppose the protocol but not at the expense of local government or the Alliance, who are set to make considerable gains in this election.

Many may simply stay at home – as around 1 in 3 people did not vote in the last election. Previous analysis shows that this is more pronounced in areas with higher unionist populations.

Violence on the Campaign Trail

The election has also seen the intimidation of candidates. This has ranged from at least 100 incidents of posters being defaced to candidates told to leave certain areas.

In the most violent incident, a candidate for a small socialist party was physically and verbally assaulted while canvassing in east Belfast. Hannah Kenny, from People Before Profit, said the assault was “deeply disturbing”.

In addition to Alliance, the Green party are expected to increase their vote, although whether that will translate into any new seats remains to be seen.

Carmel, a voter in East Belfast, told Byline Times that she is voting for the Greens for the first time. This is because she has heard good things about their candidate, Belfast City Councillor Brian Smyth, but also because she feels the DUP is in a weaker position than normal there.

The Green party was also the only party that came to her door.

She would not normally give the Green’s a vote, because of their “appalling” track record in Dublin where they are in coalition.

“But I’ve had people telling me that Brian Smyth is a good candidate,” Carmel continued “and you know, he probably is worth supporting. But it’s really driven by the fact that if he has a chance of taking the seat off the DUP, then I want to support him.”