Boris Johnson and Priti Patel’s scheme to deport asylum seekers is so outrageous that critics are struggling to take it at face value. They doubt that deportees will ever reach Rwanda and see it as a ‘dead cat’ to distract from the Prime Minister’s unprecedented penalty notices. Or they are viewing it as a means to incite legal action, which Boris Johnson will use as more ‘culture war’ red meat.

But systematic cruelty has long been fundamental to the UK’s immigration and asylum system. And outlandish proposals – such as the Government’s recently announced plan to send asylum seekers to Rwanda – have a habit of turning this into practice. Before Johnson came to power, the ‘hostile environment’ developed under David Cameron and Theresa May produced the deportation and deaths of many British citizens in the Windrush scandal.

Beyond the attempt to deflect from Johnson’s many embarrassments, this policy racism against vulnerable refugees emerges from the cynical calculus of electoral racism which has long informed Conservative strategy.

Since the idea of ‘immigrants’ was first racialised in the 1950s, the right – backed by the tabloids and appeased by Labour – has ratcheted up and down its hostility to migrants and minorities according to its political needs. This political racism was central – as I show in my new book – to Johnson’s 2016 Brexit victory and his subsequent rise to power.

Ukrainian refugees fleeing Vladimir Putin’s war are currently winning sympathy even from the Conservatives, but the Government’s response has been parsimonious at best. While Johnson relishes photo opportunities in Kyiv, he has little interest in helping the war’s victims. Outsourcing their care to homeowners through the ‘Homes for Ukraine’ scheme may seem generous compared to the treatment of other refugees, but the main policy aim has been to keep the numbers of Ukrainians who make it to the UK to a minimum.

Ukraine poses dilemmas for Boris Johnson: the war has meant that he wants Britain to be seen as part of the West, but to keep its distance from the EU. He wants the UK to appear sympathetic to Ukrainians, but his Government continues to pander to the anti-immigrant core among his MPs, party members and voters. His Immigration Minister suggested that if Ukrainians want to come to the UK, they should apply to pick fruit; while another Tory MP said that “we have done our bit” on immigration from eastern Europe.

Despite this, many hoped that public support for Ukrainians, reinforcing a slow liberalisation of attitudes to immigration, would push the Government into a more liberal policy overall. The Rwanda scheme is its clear answer to that. Brexit hostility to immigrants was barely under the surface as Boris Johnson evoked the need to ‘control’ over borders at its launch.

The Nigel Farage-Daily Mail diet of attacks on east Europeans – who former Conservative Leader Iain Duncan Smith called “very low-value, low-skilled people” as the UK left the EU – may now have been suspended. But it is open season on vulnerable groups who are not this month’s worthy victims. No surprise then that Johnson has targeted the desperate people arriving on our Channel shores – who Farage, the tabloids and Priti Patel herself have turned into the ultimate undesirables.

The combination of a grudging welcome for a small number of Ukrainians and the state trafficking to Rwanda of refugees arriving in dinghies reflects how political racism works in the Brexit era. Racism is selective by definition but, like yesterday’s UKIP, today’s Conservative Government adopts a distinctive ‘pick and mix’ approach that defies simple ideas about how racism works.

The blatant anti-black racism of Enoch Powell is out, but hostility to Muslims – mostly people of colour – is justified on ‘cultural’ and ‘security’ grounds. Antisemitism, once equally endemic in the Conservatives and far-right, is now the ultimate sacrilege; but Gypsies remain an easy target (in 2020, Patel used a Zoom meeting with Jewish leaders to blame Travellers for crime). Meanwhile, Hong Kongers – portrayed as beneficiaries of the British Empire – have been given an apparently generous offer to settle in the UK and leave behind Beijing’s repression (leading to some commentators to paint Johnson as an immigration liberaliser).

Treating some minorities as ‘worthy’ helps deflect the charge of racism and allows racist voters to believe themselves to be virtuous while backing their worst instincts. It also helps bind favoured groups into the Conservative electoral coalition.

Many decades of shifting political racism have created a rich reservoir of racialised attitudes for Boris Johnson’s regime to exploit. As the cost of living crisis escalates and with any tangible benefits of the Government and Brexit wholly lacking, expect ever more wheezes like the Rwanda scheme which will cause devastating harm to people’s lives.

Martin Shaw is Emeritus Professor of International Relations and Politics at the University of Sussex and Research Professor at the Institut Barcelona d’Estudis Internacionals. He is the author of numerous books on global politics, war and genocide – including ‘Political Racism: Brexit and Its Aftermath’ 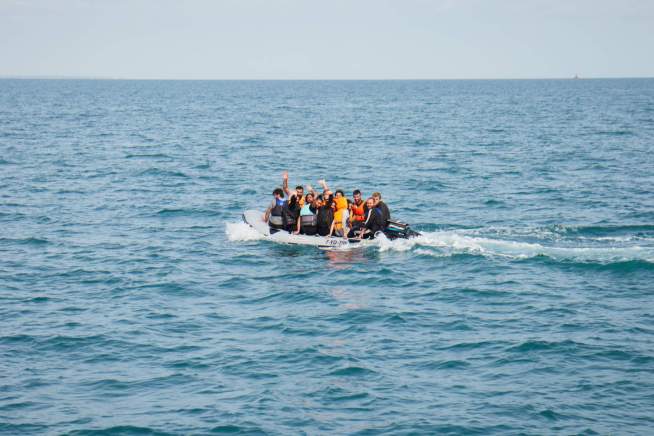