The incestuous relationship between politicians and the press now frames the very nature of British democracy, says Mic Wright

On this day 61 years ago, President Dwight Eisenhower delivered his televised farewell address. Aged 70, eight years younger at the conclusion of his second term than President Joe Biden was at the start of his first, and at the end of his long public life, he was about to hand over the presidency to the 43-year-old John F. Kennedy, the youngest man ever elected to the office.

With no wars left to fight or elections left to win, Eisenhower delivered a speech that was not valedictory but cautionary. Assisted by his younger brother, Milton, and his chief speechwriter – the gloriously-named Malcolm Moos – he issued a warning that would echo through the rest of the 20th Century and into the 21st:

“The conjunction of an immense military establishment and a large arms industry is new in the American experience. The total influence – economic, political, even spiritual – is felt in every city, every statehouse, every office of the Federal Government… Our toil, resources, and livelihood are all involved; so is the very structure of our society.

“In the councils of government, we must guard against the acquisition of unwarranted influence, whether sought or unsought, by the military-industrial complex. The potential for the disastrous rise of misplaced power exists, and will persist.”

Those four words – the military-industrial complex – provided a concise way of describing the interwoven and corrupting interactions and vested interests of the state, the military, and the corporations that supply it.

In his preface to the journalist Norman Cousins’ 1987 book The Pathology of Power, the diplomat and historian George F. Kennan pithily explained its effect: “Were the Soviet Union to sink tomorrow under the waters of the ocean, the American military-industrial complex would have to remain, substantially unchanged, until some other adversary could be invented. Anything else would be an unacceptable shock to the American economy.”

As arms dealer of choice to some of the world’s most obscene regimes, the UK is as tied-up in the military-industrial complex as the US – but its driving force is the media-political complex.

Despite declining revenues and readership, the British press (and the broadcast media that hews closely to the agenda it sets) does not simply report the news, it creates it.

The advent of the modern media-political complex goes back to Margaret Thatcher’s 1981 deal to allow Rupert Murdoch to acquire The Times and The Sunday Times and was super-charged by the Tony Blair-Murdoch pact of the mid-1990s. The Sun’s Kelvin MacKenzie monstered the opposition in the 1980s and, his successors – notably Rebekah Brooks – were able to transform their editorial lines into government policy.

The protection racket demonstrated by the ‘sleaze’ stories of the John Major era taught New Labour that acquiescence to the Murdoch press’ demands was a necessary part of securing electoral success. But, the media-political complex is also driven by the Daily Mail, the worldview of which under Paul Dacre was echoed in the Blair Government tacking further and further right on social policy and crime.

David Cameron doubled-down on this approach and it has only intensified under Boris Johnson – a politician gripped by journalism’s basest instincts, shifting policies with the short-term thinking of a columnist on deadline. 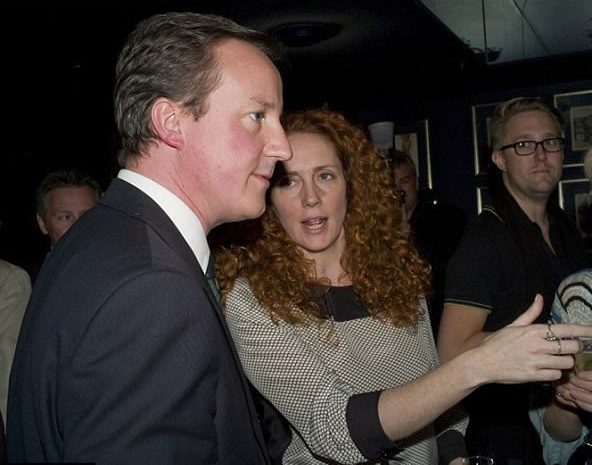 David Cameron was inBed with Britain’s PressWhy is he Airbrushing Out hisHistory as a Media Puppet?

Most recently, the media-political complex can be witnessed throughout ‘partygate’ – a scandal revealed by tactical leaks rather than principled whistle-blowing. Allegra Stratton played an unwanted starring role in the leaked video that really kicked off the story, joking about a Downing Street Christmas party in late 2020. Her husband is James Forsyth, political editor of the Spectator magazine and columnist for The Times. Forsyth’s best friend is Rishi Sunak, the Chancellor and pretender to Johnson’s throne.

While the rest of the press pack rushed to uncover more party stories, the Sun, already fingered for its own rule-breaking Christmas party in 2020, demurred about splashing on the story. Then it emerged, via the Telegraph, that James Slack, the ex-Mail man who worked as Downing Street’s director of communications before joining the Sun as its deputy editor, had been thrown a leaving party on the eve of Prince Phillip’s funeral.

When the Sun finally wrote about that development – in a front-page story bylined to Harry Cole, the ex-boyfriend of the Prime Minister’s current wife Carrie Johnson – it deferred its mention of Slack’s current employer to the penultimate paragraph, nestled on an inside page. Meanwhile, on LBC, the Prime Minister’s sister Rachel Johnson assured her listeners that she had not witnessed any rule-breaking and vouched for her brother’s character. This is the same woman who claimed in November that Rupert Murdoch had asked Johnson to “get rid of the BBC” then rapidly backtracked saying that it was “a joke taken out of context”.

This weekend, as part of what is variously being called ‘Operation Save Big Dog’ and/or ‘Operation Red Meat’, Culture Secretary Nadine Dorries was on the front of the Mail on Sunday announcing a £2 billion funding cut to “clobber the BBC”. She followed up with a tweet saying that the next licence fee announcement “will be the last”. But Rachel Johnson was just joking, you see.

President Eisenhower’s words from 61 years ago can be repurposed for the media we endure now in modern Britain. The “acquisition of unwarranted influence” is everywhere, shown in every quiet chat between media executives and politicians; revealed by every hack slipping into government; every think tank given column inches and air-time while refusing to reveal who funds it and why. The “disastrous rise of misplaced power” is more obvious every day.

The timing and placement of the ‘partygate’ stories matters more than their content. The emotions of the broken and bereaved are being manipulated for the benefit of palace intrigue. Boris Johnson is a creature of the media-political complex and, just as his rise was enabled by it, his demise is being contrived by it. The “misplaced power” of Murdoch and Lord Rothermere abides.