Sian Norris and Heidi Siegmund Cuda delve into what happened on 6 January 2021 at the US Capitol, exposing both the militarisation of the insurrectionists and the failures of the security forces to respond to a war-like threat

“Be ready to fight,” the bulletin reads. “Congress needs to hear glass breaking, doors being kicked in, and blood from their BLM and Pantifa slave soldiers being spilled. Get violent. Stop calling this a march, or rally, or a protest. Go there ready for war. We get our President or we die. NOTHING else will achieve this goal.”

This was the message sent anonymously on a bulletin board to those hoping to attend the Capitol on 6 January 2021. Within four hours that day, seven of its plans had been realised, stopping short of the ultimate goal of keeping Donald Trump in power.

As armed men stormed through the Capitol rotunda, smashing glass, kicking in doors and attacking police officers as they went, they chanted “hang Mike Pence” – the Vice President they considered to be a traitor due to his decision to certify Democratic Joe Biden’s election win.

Analysis by ProPublica and the Washington Post has now learned that 650,000 Facebook posts written between 3 November 2020 and 6 January 2021 attacked the legitimacy of the 2020 US Presidential Election – many calling for fatal violence and a civil war.

“Looks like civil war is now inevitable,” read one post; while another explained “we are going to shoot the traitors”. In a clear call back to history, some posts shared images of Civil War-era gallows with hooded figures waiting to be hanged. “We will have Civil War in the streets before Biden is Pres” demanded one poster.

While some posts may have represented inflamed rhetoric with no plans to enact real life violence, the presence of weapons, pipe bombs and hand ties at the attempted insurrection demonstrates that, for some at least, the desire to spark war was deadly serious.

“Leading up to the insurrection on 6 January 2021, the plan was in public and it was clear,” Jim Stewartson, an Emmy Award-winning games producer who exposes far-right extremism and co-hosts the Radicalized: Truth Survives podcast, told Byline Times. “They wanted anti-fascist protestors to come to the event and clash with Trump supporters so that Trump would have an excuse to invoke the Insurrection Act and institute martial law.”

This would, the insurrectionists hoped, lead to armed, racialised violence codenamed “boogaloo” in far-right circles.

For this reason, Stewartson told Byline Times, “we created hashtags like #Jan6TrumpTrap and #DontTakeTheBait. It took off and was retweeted by many influential people. Many people told me it was the reason they stayed away. If we had showed up to fight them, it might have been the end of democracy right then and there”.

Support for Violence, Failings on Prevention

How did things get so far out of control, so fast on 6 January 2021? How was it possible for armed insurrectionists to invade the Capitol, after their war-like ambitions had been so clearly signalled?

In the run-up to the ‘Save America’ rally, the Capitol Police board refused a request from its police chief to declare a state of emergency and place the National Guard on standby, while Trump’s new Defence Secretary, Christopher Miller, sent a memo to the DC National Guard forbidding the deployment in support of Capitol police without reference to the Department of Defence. Miller was a recent appointee to a Department of Defence that Trump had purged following his election defeat, replacing personnel with those loyal to him.

It is worth noting that the Capitol Police Board did encourage informal contacts to facilitate the mobilisation of a National Guard ‘Quick Reaction Force’ in case of trouble, and the deployment of DC National Guard (DCNG) members on traffic duty.

“They got as far as they did through the complicit exercise of a final vestige of presidential incumbency, the power to not act,” according to Brent Allpress, an open source intelligence researcher whose work on the impact of data mining of military personnel and churchgoers featured in People You May Know.

“The primary support given to the mob was the withholding of permission to deploy the National Guard,” he told Byline Times. “Anyone in the chain of command who conspired to defer urgent deployments to protect the Capitol should be charged as a party to the mob itself. They should be held accountable for a coordinated attack aimed at ending democracy in the United States. This wasn’t an insurrection, it was a failed coup.”

The failure to prepare for violence that was clearly signposted on mainstream social media channels such as Facebook is one indictment of how the Donald Trump regime was unable to cope at best, and was complicit at worst, with the militarised, far-right attack on democracy.

In the run-up to 6 January, Trump met with the Federalist Society’s John Eastman, his former chief strategist and the far-right ideologue Steve Bannon, his lawyer Rudy Giuliani and others to discuss how to prevent the certification of Joe Biden’s election.

The result was the ‘Eastman memo’ – a document that urged Mike Pence not to certify the election, with the aim to keep Trump in power.

The day before the attempted insurrection, a document known as the ‘Waldron Powerpoint‘ urged Trump to declare a state of emergency by citing electoral fraud, Chinese electoral manipulation and “riots, threats, censorship, looting”.

Waldron had become known for circulating misinformation about voter hacking, testifying before the Pennsylvania Senate and meeting Trump. He reportedly gave the Trump administration his Powerpoint presentation that provided a blueprint for how to overturn an election.

His proposals were echoed by Mike Flynn – Trump’s former National Security Advisor who was forced to resign 22 days into the role. Following the 2020 election, Flynn called on Trump to suspend the US Constitution and declare martial law – claiming the actions were necessary to avoid an imminent “shooting civil war”. Flynn referred to the 1860s Civil War and argued that Antifa and Black Lives Matter protestors had an anti-American agenda. The military, his argument went, should re-stage the election. 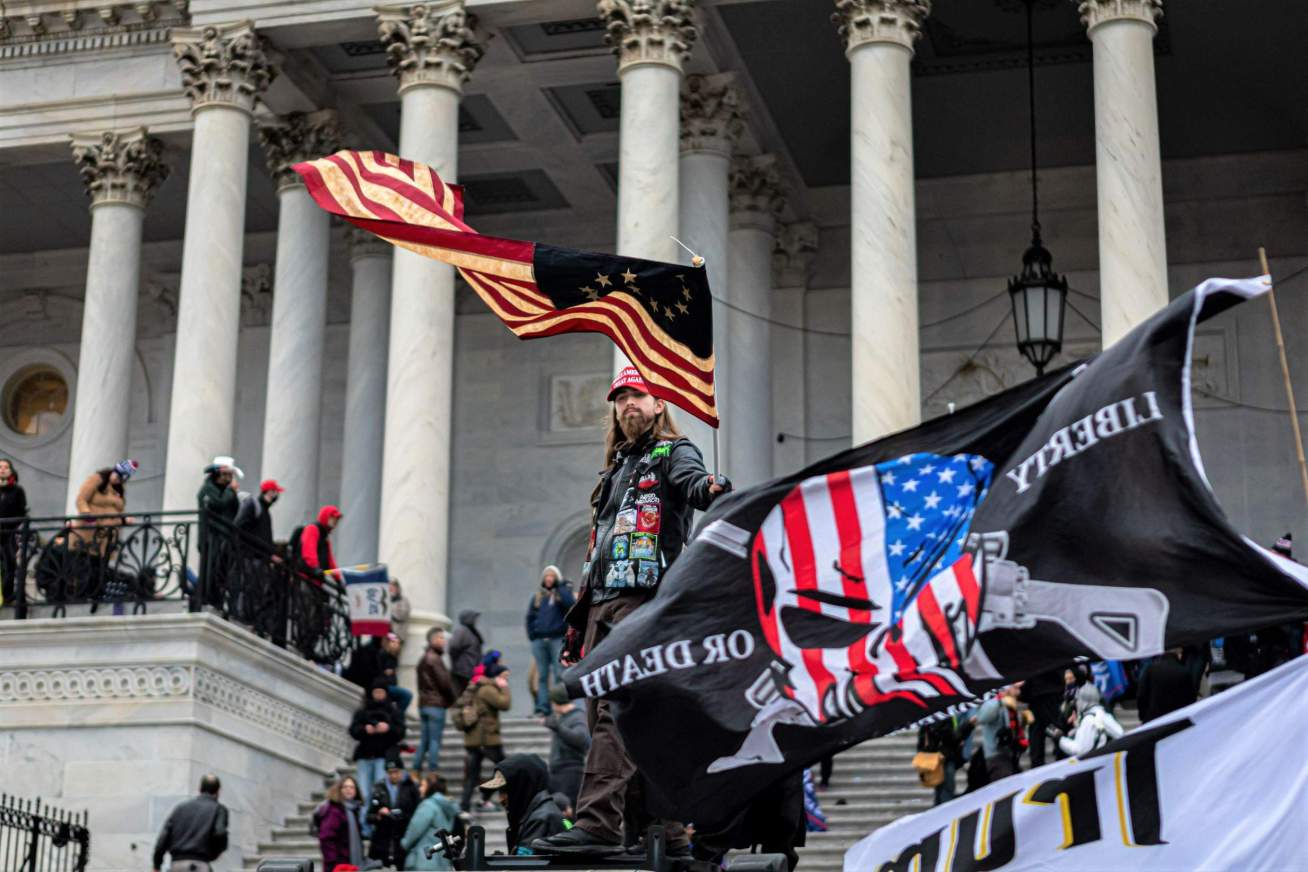 In December 2020, Flynn apparently met Trump in the Oval Office where he repeated his suggestions – although there was pushback from Trump’s aides. Six months after the Capitol riot, Flynn appeared to say that a coup similar to the one in Myanmar “should happen here”, although he later denied endorsing such actions.

Flynn’s brother, General Charles Flynn, has been confirmed by the US army of being present during a key telephone call on 6 January when Washington D.C. government officials and US Capitol Police requested for National Guard troops to quell the growing violence. Initially he was not listed as taking part in any of the calls that day regarding mobilising the National Guard. There is no indication that General Charles Flynn shares his brother’s views.

“Mike Flynn was pardoned right after the 2020 election and began to overtly direct the QAnon+ cult,” said Stewartson. “He went on numerous QAnon and other disinformation shows, including Alex Jones the day before the insurrection where he promoted the events of the next day. Behind the scenes, he was coordinating with QAnon to fund and plan the attack on the Capitol.”

According to Rolling Stone magazine, two people who took part in the attempted insurrection allege that members of Congress were involved in planning both Trump’s efforts to overturn his election loss and the 6 January events. The two sources also claimed to have interacted with former White House Chief of Staff Mark Meadows, who they describe as having had an opportunity to prevent the violence, as well as other members of Trump’s team and a range of hard-right Congresspeople with links to the baseless QAnon conspiracy theory.

The true believers who showed up at the US Capitol on 6 January were the radicalised frontline soldiers. They were radicalised digitally by dystopian videos designed to twist their minds away from reality so they could attempt to overthrow their own democracy.

In what was described by a police officer at the first January 6 hearing as a “medieval battle”, they failed in their mission because pro-democracy activists stayed home. The only people left for them to fight were the police officers protecting the Capitol, a supreme irony for a party that pre-Trump was known for its reverence for law and order.

But the danger has not passed. One year on, it appears that support for the violence has increased, albeit by a small percentage. A poll by CBS found that, in January 2021, 13% of Americans surveyed approved of the actions of those who forced their way into the Capitol – now it is 17%. Among Republicans, 18% say they approved, with a further 6% strongly approving.

These numbers signify the far-right capture of mainstream conservatism.

Heidi Siegmund Cuda is a co-host of the Radicalized:Truth Survives podcast