On 6 January 2021, far-right groups and Donald Trump supporters invaded the US Capitol in an attempted insurrection. One year on, Sian Norris and Heidi Siegmund Cuda delve into what happened that day in a series of articles exposing how far-right aims expressed by the ‘mob’ have become the policy of the Republican elite

As the votes piled in for Democrat candidate Joe Biden on 3 November 2020, Donald Trump continued to push the message to his base that the election had been stolen, rehashing a Roger Stone ‘Stop the Steal’ slogan first rehearsed in 2016. It was a lie that would become increasingly dangerous.

On 6 January 2021, American law-makers gathered at the Capitol to certify Biden’s electoral college win. Outside, Trump was leading a ‘Save America’ rally for his supporters. In an inflammatory speech, he claimed that the election was rigged and that the Democrats had won through voter fraud.

The far-right attempted revolution would, it seems, be televised. News anchors struggled to find the language to describe the scenes, as what had begun as a rally became a riot, became an attempted insurrection. The mostly white, mostly male crowd – some of whom carried weapons and equipment to take hostages – claimed to represent America.

The muddle of movements at the Capitol that day make it difficult to pin the blame for the violent events that followed on one group or individual. However, what has become clear is that Trump money was behind the organising of the initial ‘Save America’ event, while dark money from radical-right funders and groups helped spread the “big lie” and bring violence to the heart of American democracy.

Staging a rally costs money and it was money that the Trump team was keen to put up in order to spread its conspiracist message that the 2020 US Presidential Election had been stolen. Analysis by OpenSecrets has since revealed how Trump and “dark money” groups raised millions for the organisers of the rally.

Recipients of the funding included various individuals employed to organise the rally, named in the permits granted by the National Parks Service to hold the event on 6 January. OpenSecrets found that the rally’s operations associate, James Oaks, received a $126,000 salary from the Trump campaign through at least November 2020, while the rally’s backstage manager Ronald Holden was paid around $72,000 for payroll and consulting in early 2020.

Another individual named in the permit was William Wilson, who in October 2020 received around $6,000 in payments for advanced consulting through November 2020 alone. Caroline Wren, listed in the permit as the “VIP advisor” for the rally, was paid $170,000 from the Trump political operation. Wren has since been subpoenaed for her involvement in the events.

Maggie Mulvaney, niece of ex-Trump acting chief of staff Mick Mulvaney, was another VIP lead for the event. OpenSecrets found that Trump’s 2020 campaign paid her at least $138,000 through November 2020.

Mulvaney has been subpoenaed for her role in 6 January 2021, as has Megan Powers, a consultant and “operations manager” for the event who was paid around $300,000 as the Trump campaign’s director of operations. The Make America Great Again PAC – a group dedicated to helping Trump win the White House a second time – paid Powers a further $20,000 for “recount administrative consulting” in 2021.

Other individuals working on the rally and paid by the Trump operation include Justin Caporale and Tim Unes, who was remunerated more than $117,000 by the Trump campaign through at least November 2020. The pair’s firm, Event Strategies, received more than $1.7 million from Trump’s campaign and joint fundraising committee.

Meanwhile, Donald Trump Jr’s fiancée Kimberly Guilfoyle boasted that she had raised $3 million for the rally, as well as lobbied to include far-right speakers in the run-up to the riot.

The Trump-affiliated America First Policies also offered financial support for the events on 6 January, with tax returns obtained by OpenSecrets showing that it provided funding to Women for America First, a 501(c)(4) non-profit that submitted the rally’s permit records to the National Park Service.

But the dark money behind the rally went deeper than Donald Trump’s campaign payroll. It involved various radical-right funders and the projects they support, some of which actively transported rioters to the Capitol with the message that they needed to “save America” and “fight for this President”.

Central to the radical-right’s dark money operations is the Donors Trust, a shadowy organisation that funds a range of projects both in the US and in Europe.

The list of its beneficiaries includes climate denying, anti-abortion, anti-LGBTIQ and pro-Brexit forces, including those with links to the UK Conservative Party.

As a donor-advised fund, Donors Trust is not legally required to disclose the identity of its donors and many of them remain anonymous. However, it is widely understood that it is linked to the oil and gas billionaires the Koch Brothers, while Robert Mercer’s family foundation poured $20 million in 2020.

One of the beneficiaries of Donors Trust money is the Federalist Society, an organisation linked to the events of 6 January, not least via John Eastman, chair of the society’s Federalism and Separation of Powers practice group.

In the run-up to 6 January, Eastman joined Trump’s “command centre” at the Willard Hotel in Washington D.C. where Trump’s lawyer Rudy Giuliani – who had called for “trial by combat” in the run-up to the events – strategist Steve Bannon and former New York City Police Commissioner Bernard Kerik, who was there as an investigator, and others, plotted a strategy to prevent Biden’s presidency. On 4 January, Eastman attended the Oval Office with Trump and Vice President Mike Pence to outline scenarios for denying Biden the presidency.

Eastman also authored what is known as the ‘Eastman memo‘, outlining a proposed scenario to block Joe Biden’s election being certified. “The main thing here is that Pence should do this without asking permission,” the memo read. On 6 January, John Eastman told the assembled mob that any member of Congress “not willing to stand up” and vote against certification of the 2020 election results “does not deserve to be in office”.

The Federalist Society played an important role in shaping the US judicial system under Trump. Leonard Leo, the society’s former long-time vice president and co-chairman of its board, exerted great influence over Trump’s judicial nominations throughout his presidency, including his Supreme Court picks. Leo worked with both the Trump and the George W. Bush administrations to get his men onto the Supreme Court bench, with pro-abortion organisation NARAL saying that Leo was “personally responsible for helping install one-third of the current Supreme Court”.

The Supreme Court would have a say on whether or not the 2020 election was stolen. As it happened, it chose to uphold democracy. But as we will see in the rest of this series, the radical-right influence in the court is helping to achieve the far-right goals of the insurrectionists.

Leonard Leo is linked to the The 85 Fund which received $48.7 million in grants from the Donors Trust in 2020 – more than six times the group’s total revenues for 2018.

That money is disseminated across groups that helped support the “big lie” or were actively involved in the incidents of 6 January. These included the Honest Elections Project, which filed a brief with the US Supreme Court arguing that the Pennsylvania court had usurped the legislature’s authority to oversee elections. It was unsuccessful, but election law professor Richard Hasen called the arguments the “powder kegs” that threaten American democracy.  Turning Point USA won grants worth $580,000 from the 85 Fund. The organisation – which has links to Conservative Party donors via its UK branch – bussed protestors to Washington D.C. 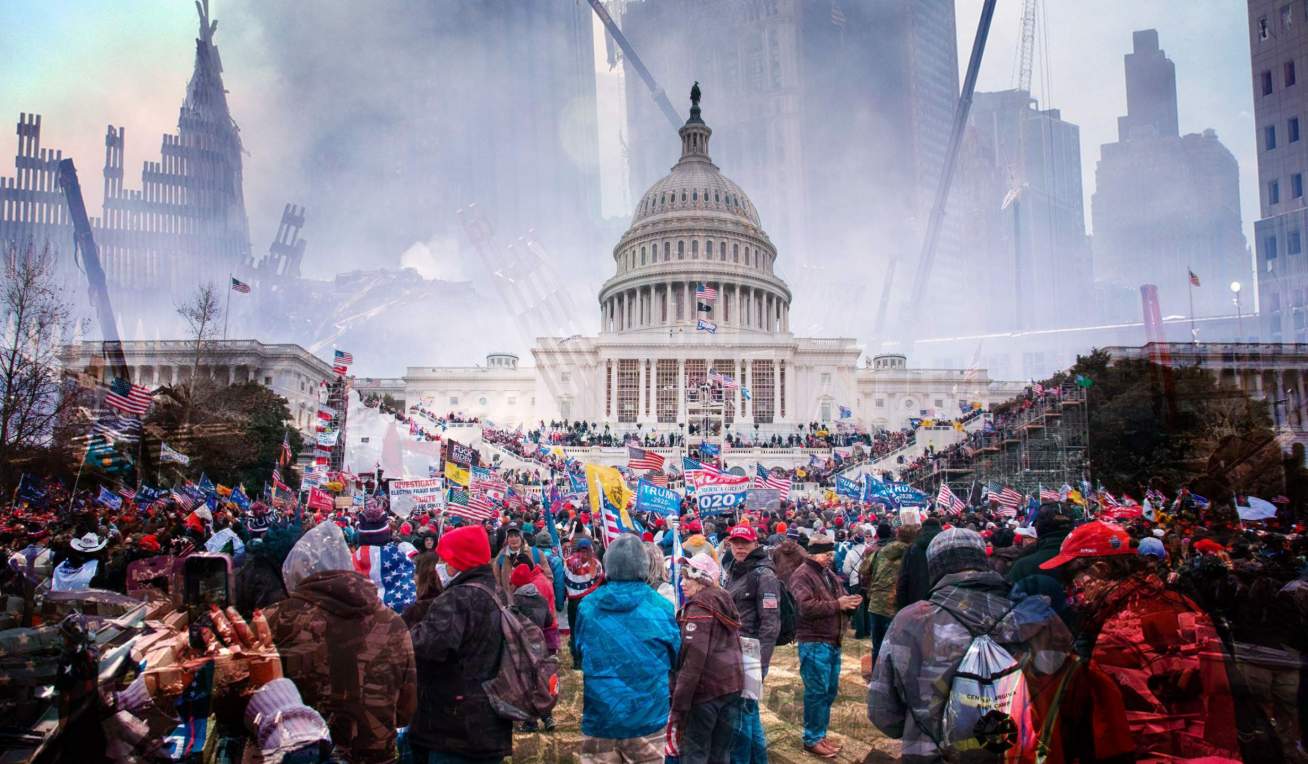 Another organisation funding the “big lie” is Bradley Impact, managed by the Bradley Foundation. Tax filings for fiscal years 2018 and 2019, exposed by investigative journalists at The Intercept, revealed how Bradley Impact funded groups that constitute “a network of election fraud conspiracists and undertook legal efforts to overthrow the 2020 election”. These included The Public Interest Legal Foundation, which received more than $300,000 from Bradley Impact and which the New Yorker accused of “leading the way” in attempts to nullify the 2020 election.

Public Interest Legal Foundation lawyer Hans von Spakovsky and its former president J Christian Adams, were appointed by Trump in 2017 to investigate voter fraud, although they found little to substantiate their claims that such fraud was widespread. According to Jane Meyer in the New Yorker, both men have “lent support to Trump’s lies from the time he took office”. Von Spakovsky now heads the Heritage Foundation’s Election Law Reform Initiative, which has received grants from the Bradley Foundation.

In November, the Heritage Foundation welcomed UK Home Secretary Priti Patel to deliver a speech. She joined her colleagues Liz Truss, Liam Fox and former MP Owen Paterson in the list of Conservatives who have addressed the radical-right think tank.

Anne Nelson, author of Shadow Network: Media, Money and the Secret Hub of the Radical Right, told Byline Times: “The flow of dark money into sowing chaos and disruption has continued unabated since 6 January 2021, emanating from both Koch and fundamentalist donor circles. We can observe their influence in media campaigns promoting false claims of election fraud in 2020, as well as funding COVID-19 disinformation that is expanding the current record number of cases.

“The public should be alert to the menace of these disinformation campaigns, and aware that the goal is to destabilise our Government and our healthcare system for political ends – regardless of the cost of human lives.”