An ancient artefact due to go on display at the British Museum opens our eyes to a sophisticated and internationally-connected Bronze Age community, says Mike Stuchbery

If someone was to tell you the story over a pint, you wouldn’t quite believe it.

It’s the story of a priceless and ancient artefact worshipped perhaps by an entire culture, before being lost to history. It features illegal metal detectorists, black market dealers, and a plucky archaeologist determined to recover it. And it concludes in a hotel bar in Basel, with a sting that would not be out of place in a crime thriller.

My fascination with the Nebra Sky Disk has lasted for many years. More than any other artefact in human history, it has the capacity to personally inspire awe and wonder.

For those of you who don’t know, the Nebra Sky Disk is the oldest depiction of the night sky that we know of – created around 3,600 years ago during the Bronze Age. It shows a crescent moon, a full moon (or sun) and the constellation of the Pleiades. Later additions include two golden bands that match the span of sunrises and sunsets in the Harz mountains of Germany on either side, and what appears to be a golden boat.

It is believed the Disk was used as an early calendar to help farmers plan when to grow their crops. For an agrarian Bronze Age community, this knowledge was the difference between life and death.

The Nebra Sky Disk is so called because it was found in 1999 in the forests near Nebra. From the woods of Central Germany, it soon vanished into the black market.

Learning of its discovery and disappearance, Sachsen-Anhalt state archaeologist Professor Dr Harald Meller determined he would recover the object for study.

Three years later, in 2002, Meller arrived to meet dealers at a bar in Basel. What he didn’t expect was to find himself in the middle of a police sting. He got hold of the Disk, refused to return it, and around him undercover police sprung into action to arrest the dealers.

The Disk was now in the keeping of those who cared about curating it for history – and Meller set to work. Years of study revealed how the Disk could function as a calendar. He and his colleagues determined  that the appearance of a crescent moon and the Pleiades in the sky together was a signifier to add another month to the lunar calendar. It was this plan that helped farmers to plant their crops on time. 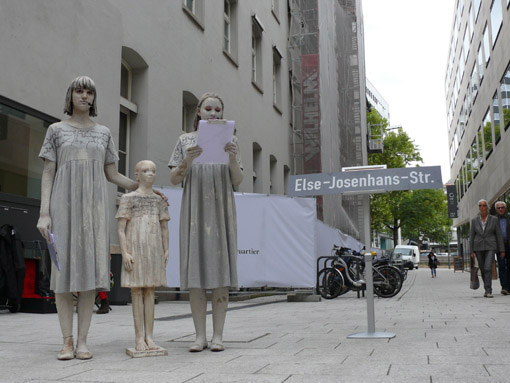 Building on the RubbleThe Memorials of Stuttgart

The Disk was held by a priestly class of the Unetice and revered for hundreds of years. Just like in 2002, it was likely fought over during its long history. The fact that archaeologists have been able to identify additions throughout the centuries suggest that lunar knowledge was superseded by a more overtly religious connotation – with the sun being transported across the sky by a boat.

Roughly contemporaneous with Stonehenge’s later use, the Disk is also evidence of a network of trade and knowledge stretching across Europe. The copper came from Austria, while the gold was mined in Cornwall. It is thought that the knowledge imparted by the Disk originated in the Near East and made its way to northern Europe via Mediterranean trade routes.

What the Disk tells us is that far from primitive and simple people, people in the Bronze Age were sophisticated traders who shared goods and knowledge to create beautiful, long-lasting objects. They were the first state builders and the first people to trade across great distances. These were people who understood the wider world.

The Nebra Sky Disk will be the centrepiece of the British Museum’s forthcoming exhibition ‘The World of Stonehenge’, which runs from February to July 2022. Its inclusion helps to establish Stonehenge’s links to the greater world and demonstrates how Bronze Age Britain was a bustling, sophisticated society.

The story of the Disk has also made it into literature – Dr Meller and science writer Kai Michel have written two German bestsellers exploring its history and the world it was created in: The Nebra Sky Disk and Reach for the Stars.

A copy of the Disk has even made it into the heavens it famously depicts. Astronaut Matthias Maurer took a copy with him to the International Space Station and the object will later be displayed at the  Museum for Prehistory in Halle, Germany. It also provides the basis for the mission path of his ‘Cosmic Kiss’ mission.

That’s the power this Disk has to inspire. Thousands of years after it was made in central Germany, it remains a soaring beacon of hope in a time of relative chaos and confusion: hope in the future, hope of a brighter morning after a dark night, hope of connection and communication.