Following a special investigation by Byline Times, the Advertising Standards Authority is reviewing material published by the London newspaper around the COP26 UN climate change summit

The advertising watchdog is reviewing material published by the Evening Standard newspaper in the wake of an investigation by Byline Times that examined its commercial dealings with Saudi Arabia.

The investigation found that the Independent and Evening Standard titles accepted money from Saudi Arabia to publish dozens of positive environmental stories about the country before, during, and after the COP26 UN climate change summit in Glasgow last month.

A spokesperson for the Advertising Standards Authority confirmed to Byline Times that the regulatory body is reviewing material published by the Evening Standard and could potentially open a formal investigation into the newspaper’s dealings.

“We’ve received a complaint about these ads, which we are currently reviewing to determine if further action is necessary,” a spokesperson said. “Broadly speaking, we have strict rules about disclosing affiliate marketing online. Fundamentally, ads need to be obviously identifiable as such. With news articles, the commercial nature of the content should be clear before consumers engage with it.” 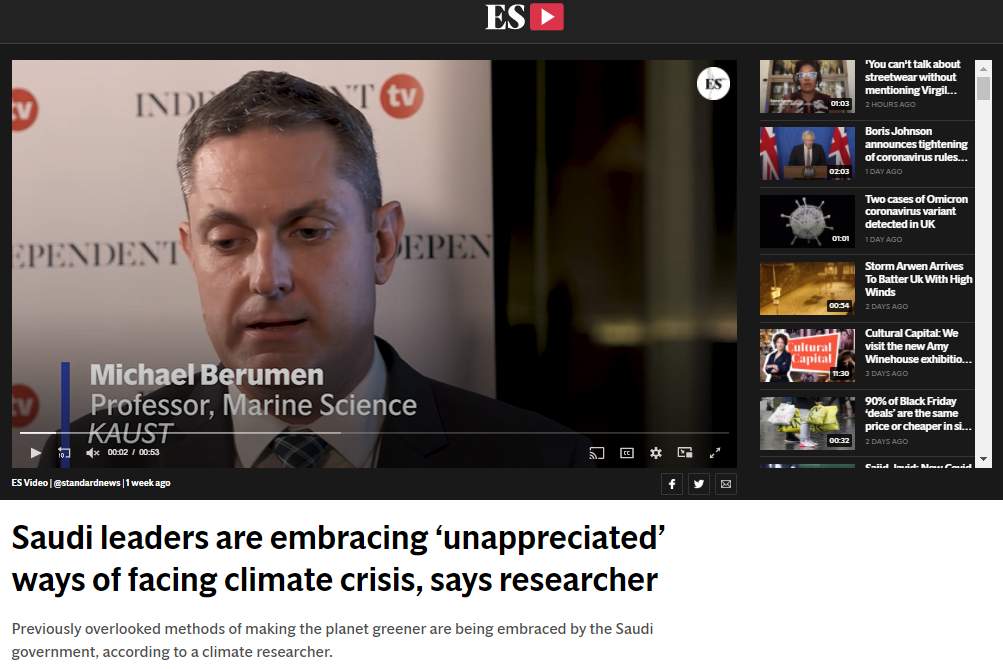 The Independent told Byline Times that it was paid by Saudi Arabia to publish stories and videos ahead of COP26, as part of a partnership with the Saudi Green Initiative (SGI) – a Saudi Government entity that is focused on climate change and sustainability.

However, it refused to reveal how many stories it had published under the deal and how much it had been paid, saying that it was “not obliged to share details of commercial relationships”.

Out of 50 stories, published by the Independent and identified by Byline Times, 80% either presented Saudi Arabia’s energy ministry or an environmental scheme in the country in a positive light. Just three of the 50 pieces identified under the commercial deal provided contextual details about Saudi Arabia’s oil production. None of them mentioned its plans to increase oil production capacity from 12 million barrels per day to 13 million barrels a day by 2027.

The Evening Standard did not respond to Byline Times‘ request for comment regarding its partnership with Saudi Arabia. But, since the publication of the investigation, the Evening Standard has added ‘Partner Content’ labels to the 12 stories that were identified as unlabelled commercial content.

The 12 stories that were published by the Evening Standard included an article and a video titled: ‘Saudi Leaders Are Embracing “Unappreciated” Ways of Facing Climate Crisis, Says Researcher’. One story praised a conference organised by Saudi Arabia in London, calling it the ‘COP of Doers’. Another featured Joseph Michael Daniels, the founder of a London-based construction technology company, and was titled: ‘Saudi Green Initiative is ‘new frontier’, says Project Etopia founder’.

Several environmental groups have called for increased action by regulators to stop entities that profit from pollution from using their extensive financial resources to promote environmental credentials.

Duncan Meisel, director of Clean Creatives, said: “I think that there is a need for regulatory agencies to take a close look to decide whether this kind of paid engagement is appropriate. Additionally, I think there’s a bigger role for society to recognise that during the climate emergency, it’s not appropriate to be advertising the entities that are most responsible for that emergency.”

A spokesperson for Fossil Free London told Byline Times that “regulation and intervention” is required, as is “increased public pressure”.

“If a newspaper has a partnership with Saudi Arabia and there is no transparency around it there are obvious questions that need to be answered,” they said.

In September, the Advertising Standards Authority announced plans to launch a series of inquiries into environmental advertising claims and practices across a range of sectors as part of a drive to support global efforts to reduce carbon emissions and avoid catastrophic climate change.

Over coming months, its sister body, the Committee of Advertising Practice, is expected to issue guidance that sets out the key principles advertisers need to follow to ensure that their ads don’t mislead the public about the environment and are socially responsible when considering environmental issues.