The majority of voters disagree with plans to create a two-tier asylum system based on how a person arrives into the country, exclusive polling by Refugee Action reveals.

Only 17% of those polled supported the Government’s proposal in the Nationality and Borders Bill to introduce a new lower-class refugee status for people and to criminalise refugees, simply for how they enter the UK.

The Bill proposes that people seeking asylum who arrive via “irregular” routes, such as small boats, will only receive temporary protection, with abridged rights and benefits, and face the possibility of removal. Last week, the number of people arriving via the Channel reached 1,000 a day.

Support for an equal asylum system was high even in conservative, Leave-voting seats. In the Home Secretary Priti Patel’s constituency of Witham, 55% of those polled opposed their MP’s flagship policy. No constituency reported more than 50% respondents in favour of the plan.

Participants were reminded of how men, women and children were forced to flee Afghanistan after the Taliban regained control of the country in August this year, before being asked if they agreed that “refugees forced to flee their home country because their lives are at risk and who seek safety in the UK should be treated the same, regardless of how they arrived here.”

Data analysed by Action On Armed Violence found that 66% (9,711) of Afghans applying for asylum between 2011-2020 were rejected, despite the UK’s armed involvement in the country.

Byline Times has been granted exclusive access to two families who fled Afghanistan. Both came via the Afghan Relocations and Assistance Policy (ARAP).

One poll respondent told Refugee Action: “I think it is an attempt to create [a] first and-second class level of refugee. That would be sad, as in the present system refugees have all the rights and benefits of everyone else, but…the refugees are still looking like second-class people.”

‘From Hell to Paradise’

Fayez – not his real name – was evacuated from Afghanistan after the Taliban takeover, having spent the previous decade working for the British Council.

“I was working from home when the phone rang,” he told Byline Times. “My colleague in the east of Kabul told me the Taliban had entered the city. People were very scared, as they remembered the very bad past experiences they had with the Taliban.”

His colleague at the British Council, Gulnar (not her real name), had expected to be evacuated from Afghanistan before the Taliban arrived in the city, however delays in getting her son’s visa meant she had remained. “It was really scary,” she explained. “It was a really bad situation for me being in Kabul. I was hearing the Taliban was searching the homes of people like me who worked for international organisations. My family, my sisters, were all afraid for me.”

Following the Taliban takeover, Fayez received a call from the Ministry of Defence (MoD) telling him to take his family to the airport in Kabul. They arrived to chaotic scenes.

Fayez and his family set off again. “This was the first time we saw the Taliban on the streets,” he explained. They arrived at the gate and waited for four hours before passing through to a second gate. “There were many, many people,” he said. “It was a nightmare for my family. There was no food, water or anywhere to go to the toilet. Some people said they had to wait for days. We can’t stand on our feet for three, four nights. My youngest daughter was afraid, she said she didn’t have the mental strength. We agreed to go back home.”

By this point, Fayez believed that “there is no chance for me to go now”. He started to consider other routes, such as escaping via Pakistan. Like Gulnar, he had now heard the Taliban was searching homes, looking for people who had worked with international organisations. “I was very shocked,” he said. “I didn’t tell my family but I couldn’t sleep.”

When he and his family finally made it through, “it was like going from hell to paradise. Kabul was only five minutes away but now we were on the safe side.”

For Gulnar, her primary concern was her disabled husband’s safety. He uses a wheelchair and speaks very little English. “We were told to go to a gate where there were around 150 people there waiting to leave,” she shared. “We waited for two hours and then we could go through. It was unbelievable to me how we got into the airport. It was very fortunate.”

Gulnar wanted to express her gratitude to her colleagues at the British Council and to the UK Government for the help she and her family received. “Everything was arranged for us. When we arrived in our new flat, all the essential things had been provided. I really appreciated the way everything was arranged.” 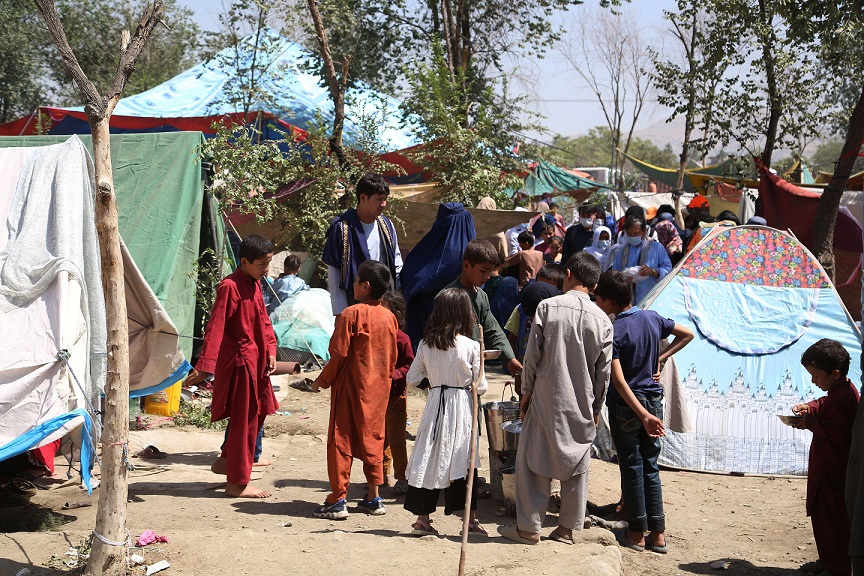 ‘We Will Not Be Allowing People to Come from Afghanistan in An Indiscriminate Way’ Do Johnson’s Pledges Go Far Enough?

Fears for the Future

Although Gulnar and Fayez are now safe in the UK, they are deeply afraid for their country’s future. Gulnar has relatives back home who work on women’s rights, and “they are at risk,” she said. “I am thinking of them. These are things the current people in power do not like.”

Fayez’s daughters are in school and college in the UK, something denied to their peers in Afghanistan. The Taliban has so far refused to let girls attend secondary school.

“I don’t see any hope,” said Gulnar. When she talks about Afghanistan, she cannot hold back the pain and distress she feels about the country she has left behind.

Both families are determined their own children will flourish in the UK and get an education. Gulnar’s son plans to go to university, while two of Fayez’s daughters dream of becoming businesswomen. The eldest plans to train as a dentist.

“Here in the UK you feel a positive energy,” Fayez explained. “People give you a nice smile and they say good morning. Here, you are human and people respect you.”

Along with friends and family, some of their British Council colleagues are still trapped in Afghanistan. Gulnar is afraid the international community has forgotten about her country.

“I want to request the international community, the UK, the US and other countries not to forget Afghanistan,” she told Byline Times. “People are suffering a lot and yet no-one is thinking about Afghanistan. It would be great if they think and find a way to help people in the whole country.”

Because Fayez and Gulnar arrived via ARAP, they can apply for indefinite leave to remain in the UK. However, if the Nationality and Borders Bill passes, many of those desperate to flee Afghanistan will be subject to the two-tier system as they will have little choice but to travel via “irregular” routes. This means they could face criminalisation and will have fewer rights – a policy that the new polling shows voters reject.

“Most voters reject the Home Secretary’s cruel and unlawful plans to punish refugees who have no other option than to make their own way to seek safety on our shores,” said Tim Naor-Hilton. Chief Executive of Refugee Action. “We need a radical rethink of how we treat people fleeing war and persecution. That starts with creating a refugee protection system that’s just and compassionate.”