A Toxic CombinationAntisemitism and Misogyny in the Far-Right

Despite the hardship she endures, Lotte’s character shows another side of Weimar Berlin. She is the liberated German woman: a worker, friend to drag queens, sexually independent, fiercely protective of her sister, and even more fiercely defiant when it comes to men.

Post-World War One Germany – like many European nations in the 1920s – was starting to move, inch by inch, towards gender equality. In Weimar Germany, the maximum penalty for abortion was reduced and abortion in cases of threat to the mother’s life was decriminalised.

Anyone with a passing knowledge of the period will know that this all changed when the Nazis came to power.

The regime made it easier for men to divorce women who didn’t want to have children or who had undergone an abortion, while incentivising childbirth and encouraging white, German women to have white, German babies for the Aryan nation.

The prime motivation for Nazi Germany to financially reward the right kind of childbirth in the right kind of family was nation-building: the German birth rate had been dropping since the early 1900s, millions of men had died in the trenches, and the imperial ambitions of the Third Reich demanded the exploitation of women’s reproductive labour to entrench its power.

But the decision to roll-back women’s rights and to crush the small beginnings of the women’s movement was also linked to the regime’s genocidal antisemitism and a belief in a conspiracy theory that feminism was a Jewish plot designed to undermine the white European race.

The historian Charu Gupta wrote in 1991 how one of the drives to remove women from the public sphere and place them firmly in the domestic was a belief that the women’s movement “was part of an international Jewish conspiracy to subvert the German family and thus destroy the German race”. Gupta explains how the Nazis believed that the women’s movement was controlled by Jewish people and that because it was “encouraging women to assert their economic independence and to neglect their proper task of producing children… encouraging contraception and abortion and so lowering the birthrate, it was attacking the very existence of the German people”.

This combination of antisemitism and misogyny remains a fundamental aspect of the modern far-right, as new research by the campaigning groups Hope Not Hate and the Antisemitism Policy Trust has revealed.

Nazi Germany’s belief that women’s liberation via contraception, abortion and divorce rights was a Jewish plot to undermine the Aryan nation was a precursor to what is now known as the so-called “Great Replacement”.

This baseless conspiracy theory posits that the ‘white race’ is being replaced by migration from the Global South, aided by feminists who are repressing birth rates and orchestrated by Jewish figures such as George Soros and, inevitably, the Rothschilds. The right-wing Fox News presenter Tucker Carlson even referred to pro-migration policies in Europe as the “George Soros way”.

Part of the conspiracy centres on an idea that society is becoming ‘debased’ by women moving out of the domestic sphere, including by taking up political leadership roles. Once women have power, far-right conspiracists claim, they tend to vote for pro-immigration, pro-LGBTIQ and pro-women policies that weaken or ‘feminise’ society.

This is obviously not the case for every female political figure or for every woman voter.

However, it is a theory voiced by far-right extremists such as Britain First founder Jim Dowson – who claimed that “society is engulfed by silly women” and that women’s presence in public space has caused “the whole of society to degenerate” – as well as men such as the tech investor Peter Thiel. The Paypal founder said in 2009 that freedom and democracy were no longer compatible, in part because of the extension of the franchise to women who persistently vote in favour of social liberalism.

This belief has evolved into what is called the “globohomo” conspiracy theory which brings together notions of white genocide, misogyny, antisemitism and other forms of racism. Hope Not Hate and the Antisemitism Policy Trust explain how globohomo means “‘feminising’ or otherwise ‘weakening’ populations by pushing feminism, sexual freedom, gender fluidity, liberal values and immigration” – just as Nazi Germany believed the sexual liberation of the Weimar period was attacking and undermining the ‘Volk’ or purity of the German nation.

Globohomo allegedly uses feminism, LGBTIQ rights and immigration “to attack the white race”, with Jewish “conspirators… engaged in a sustained, subversive campaign to destroy white populations in their homelands by lowering white birth rates and promoting immigration and miscegenation,” the report says.

“It comes from all these antisemitic tropes about Jewish people wanting to control the media, banking, academia – that they have power over all global political decisions,” explains Dr Limor Simhony-Philpott, policy and research manager at the Antisemitic Policy Trust and co-author of the report.

It is also rooted in the same Nazi-era conspiracy that feminism is a Jewish plot. 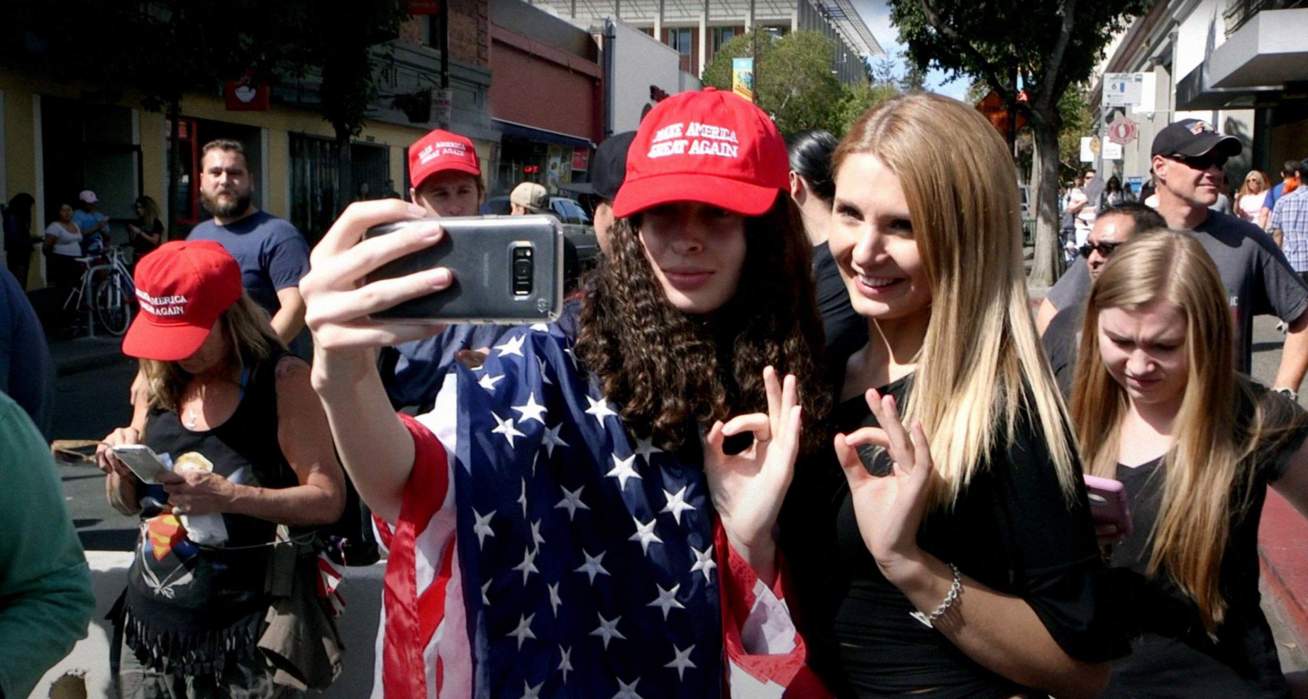 The far-right, Simhony-Philpott says, “sees feminism as a conspiracy for women to gain power through personal freedom and through marginalising men, especially white men. So they see feminists as being at the service of this great Jewish conspiracy that they think wants to destroy white European society. They attach what they see as the feminist conspiracy to the alleged Jewish conspiracy.”

The far-right positions Jewish people, the report states, “as the root of feminism and women’s behaviour in general”. The antisemitic far-right “has become increasingly adept at steering antipathy towards feminism and women more broadly towards Jew-hatred, reasserting men’s status at the expense of others”.

In the far-right, women’s position is subordinate to male authority. The fascistic notion of the natural order places women as inferior to men and pins women to a reproductive role in service of the patriarchal family and the (white) nation state – the “womb of the nation”, as author Cas Mudde terms it.

By combining anti-feminism, misogyny and antisemitism, the far-right can bring together two of its perceived enemies in one conspiracy: that Jewish people are controlling feminists in order to destroy white, male patriarchal authority. This allows the far-right to portray feminists (and therefore women) as ‘useful idiots’ being controlled by Jewish conspirators.

“What we find in the Middle Ages were gendered conspiracies about both Jewish men and Jewish women to show them as a threat to white European society,” she explains. “So Jewish men were accused of conspiring to corrupt white women by creating assimilation and undermining the white race. While Jewish women were seen as sexually deviant, morally corrupt and making a sexual pact with the devil.”

These ideas of predatory Jewish men using sex to attack European whiteness is present in the anti-feminism of the Great Replacement and white genocide conspiracy theories today. The notion that Jewish men are a threat to white women – ‘our’ women in far-right parlance – is therefore used to justify “attacks on Jews and other ethnic minorities under the pretence of ‘protecting’ women”, says the Hope Not Hate and Antisemitism Policy Trust report.

Down the Rabbit Hole

Misogyny on the far-right is often a gateway to antisemitism and wider racism such as Islamophobia and anti-black racism.

Daryush Valizadeh – otherwise known as Roosh V – found fame as a notorious ‘pick up artist’ (PUA) who advised men on how to game women into having sex with them. Now, he claims to have “Jew-pilled thousands of men”. The term ‘pilled’ references the ‘red pill’ – a far-right meme based on the The Matrix movie in which the character Neo takes the red pill and sees the truth of the world around him. In Valizadeh’s parlance, it means opening people’s eyes to antisemitic conspiracies.

“You have these spaces where men are already resentful of women,” Dr Simhony-Philpott says. “They find a sense of community on the far-right that legitimises their beliefs about women. And there, they get radicalised further to believe in other conspiracies that have antisemitic elements such as the Great Replacement.”

Valizadeh calls feminism a “Jewish war on women”. He has denounced his own PUA past for being promiscuous, but blames that same history on falling for a “Jewish trick of sexual liberation”. His words echo the Nazi backlash against Weimar Germany and its sexual permissiveness.

The reality of this misogynistic antisemitism is played out across social media as direct attacks on Jewish women, specifically Jewish women in public life.

Dr Simhony-Philpott is keen to emphasise the impact this targeted hatred has on its victims. “We know women have been targeted by coordinated attacks that include really vicious sexualised abuse about them,” she tells Byline Times. “And this includes racial slurs. It has a profound psychological impact. It generates a lot of fear. It makes women feel unsafe. And, when it comes to female politicians, it doesn’t just stifle their freedom of expression. It can exclude them from politics and that is a real threat to democracy.”

This is the endgame of far-right actors such as Dowson and also of far-right activist Bronze Age Pervert, who said it “took 100 years of women in public life for them to almost destroy a civilisation”. Analysis of the far-right website Stormfront found that female Jewish political figures were particularly targeted and received 14% more mentions than their male peers.

Antisemitism and misogyny is not the preserve of men on the far-right. It is also voiced by far-right women and by the far-left. This was highlighted by the abuse sent to former Labour MP Luciana Berger, whereby perpetrators were identified as being from across the political spectrum, including from those on the hard left. She described her last Labour Party meeting as being “so toxic, there was no humanity in the room”.