On 14 September, the British Government-backed arms fair, Defence and Security Equipment International, (DSEI) was launched in London. A biennial defence and security trade exhibition that in 2019 welcomed 1,700 exhibitors from 58 countries, it has been the source of much criticism arising from concerns that a British-backed arm trade helps fuel human rights abuses worldwide.

Despite such ethical concerns, the Ministry of Defence (MoD) sent General Sir Patrick Sanders, the UK Strategic Commander, to launch the event. In so doing, it indicated that the Government was there with a seemingly open cheque book. After all, Sanders stated that “in the last 12 months we [the British military] have been given the means to modernise with a historic funding settlement”.

One of the main themes of the fair, Sanders said, was to “create and close kill chains”. These kill chains had to apply “machine learning and AI to exploit data, support decision-making and enable expendable autonomous systems and swarming”.

The Government also, Sanders said, wanted to create what it called a ‘Digital Backbone’, “to prosecute hard strike, at extreme range, to destroy carefully selected targets”. And he asked the industry to help them with this, offering untold public funding to do so.

As the General said: “We need your help with this. In all humility. But we urgently need to go further and faster together.”

But going further and faster in creating the kill chain raises concerns. Moral ones, of course. But also concerns about the rising costs of this energetic transition from mechanisation to digitisation in the MoD, with the independent spending watchdog, the National Audit Office, rating its equipment plan as “unaffordable” for the past four years.

The NAO estimates this year’s plan’s shortfall could be as much as £17.4 billion between 2020 and 2030, leaving the Public Accounts Committee “extremely concerned.” This plan does not include an estimated £2 billion required to develop future military capabilities, which the committee states is “highly destabilising for defence”. 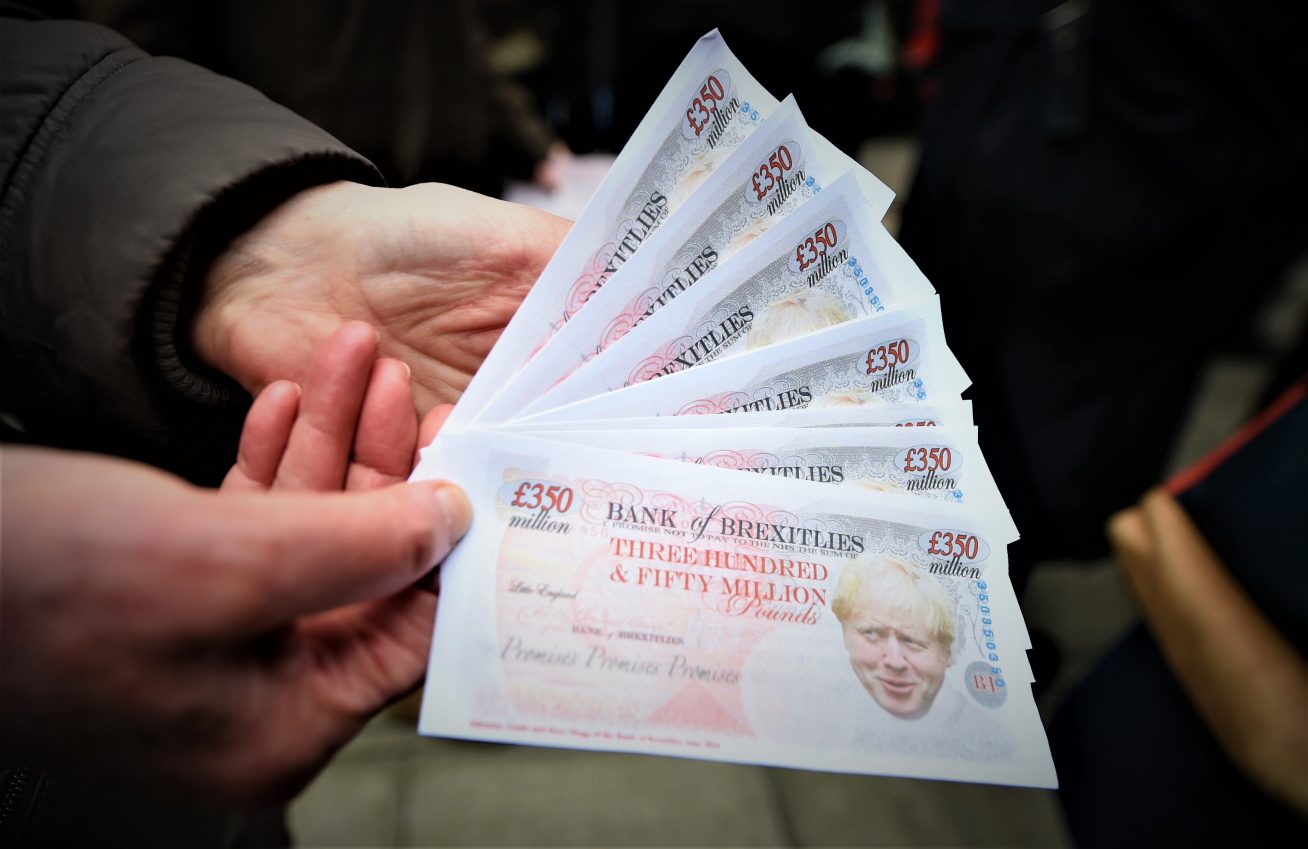 With billions of pounds set to be exchanged hands in London’s Docklands in arms sales, it is worth noting that both the NAO and the Public Accounts Committee has been highly critical of the MoD’s recent reliance on financial management strategies that result in higher overall costs and restrict the MoD’s ability to respond to new opportunities or threats.

Though an additional £16.5 billion of funding over the next four years was announced in November 2020, even this would not cover the worst-case scenario projected by the NAO – not to mention that much of it will likely be used to fund future projects rather than MoD’s current portfolio.

This short-term thinking has been aided by a lack of leadership in MoD procurement. Already under Boris Johnson’s premiership, there have been three Ministers for Defence Procurement, two leaving office after less than six months.

Neither were removed for issues related to poor management of MoD projects. Anne-Marie Trevelyan was appointed Minister for the Armed Forces after her first five months in office, before being promoted to a short-lived stint as International Development Secretary. James Heappey was reshuffled as the Armed Forces Minister after only two months in the position.

Such a lack of leadership raises further questions about whether the DSEI fair will witness huge amounts of public money being spent in the name of defence, without proper fiscal accountability.

After all, Byline Times has identified 10 programmes of interest – listed below – often with a specific focus on the digital future of warfare, which illustrate widespread programme management challenges, schedule delays and mounting costs. As Sanders said today, the British Military does not actually “have the diversity and skills needed to be competitive in the digital age… I have more need of Q, than I do 007 or M”.

In the absence of such personnel, there is a very real chance that significant amounts of British public funds could be wasted at the newly-opened trade show.

The Warrior Armoured Vehicle Upgrade programme was primarily concerned with the fitting of a new turret to accommodate a cannon supplied under a separate contract. A total of £430 million was spent on the project up to its cancellation as part of the Integrated Review of 2021.

2,000 jobs at Lockheed Martin UK and its supply chain – which is 80% British – are now at risk, as is the £1 billion gross value to the British economy that the project was expected to bring.

The aim of the Ajax Armoured Vehicle programme was to “deliver by 2025, a versatile and agile multi-role capability, operating at the heart of the Deep Reconnaissance Strike and Heavy Combat Brigades, that are able to succeed on current and future operations in the most complex and demanding operational environments”.

The programme has been rated ‘red’ in the Infrastructure and Projects Authority’s (IPA) Annual Report of 2021, indicating that “successful delivery of the project seems to be unachievable”. The project has been paused numerous times, including over concerns about noise.

Intended to deliver and support heavy transport aircraft into service, the A400M Transport Aircraft project was plagued with delays that resulted in losses and fines of billions of Euros to the lead supplier, Airbus Military SL, threatening the viability of the programme.

The Protector UAV is MOD’s attempt to improve on the current ISTAR (Intelligence, Surveillance, Targeting and Reconnaissance) capability delivered by the MQ-9 Reaper. However, the programme has suffered from substantial cost overruns and delays.

In 2016, the approved budget for the programme was £816.2 million. However, by November 2019, costs had increased by 40% to £325 million. The NAO indicated that this is primarily the result of delays for short-term affordability reasons and not for reasons of programme mismanagement. The programme is currently rated ‘amber/red’ by the IPA.

The contract for the Crowsnest Airborne Surveillance and Control Programme was awarded to prime contractor Lockheed Martin in 2017. The programme has faced extensive issues.

It is now one of only two surveyed in the IPA’s Annual Report of 2021 to achieve a ‘red’ rating in both 2020 and 2021. The NAO concludes that the MoD “did not oversee its contract with the prime contractor effectively and, despite earlier problems on the project, neither was aware of a key sub-contractor’s lack of progress until it was too late to meet the target delivery date”.

As of March 2021, the total spend for the seven-boat fleet of Astute submarine boats was £9,604 million, with a budgeted whole life cost of £10,380 million. The NAO reports that the project has seen significant post-contract cost increases.

The NAO reports that the Spearfish programme experienced cost increases of 16% between its early business cases in 2010 and formal approval in 2014, and that delays in the programme, were caused by the MoD and BAE Systems PLC’s programme mismanagement, likely in part because of difficulties negotiating the deal following the assessment phase.

The programme is cited by the NAO as an example of the MoD’s under-estimation of programme complexity.

New Style of IT (Deployed)

The New Style of IT (Deployed) programme aims to deliver an IT system capable of delivering operational information to land, air, maritime and joint users and was meant to have an “agile” style of procurement. However, the New Style of IT delivery team concluded in September 2020 that the programme could not deliver against its approved cost, time and performance parameters.

The Challenger 3 programme contract was awarded to Rheinmetall BAE Systems Land on 7 May 2021 but has already encountered cost-related issues.

Between its early business cases and formal approval, cost estimates were increased by 69%, and spiralling costs were only controlled by reducing the number of tanks to be upgraded from 227 to 148.

Skynet 6 is a part of the MoD’s Future Beyond Line of Sight satellite programme, functioning as a replacement to the existing Skynet 5 communications satellite. While the Skynet 6A contract is delivering to schedule, the Future Beyond Line Of Sight programme was rated ‘amber/red’ by the IPA in 2021, as a result of the impact of COVID on the operating environment.

The NAO notes that Skynet 6 has faced problems in recruiting and retaining staff to oversee digital programmes, in particular “finding it difficult to rebuild capacity in space-based capability after the department let its predecessor under a private finance initiative contract, thereby losing in-house skills” – 21% of the roles were filled by temporary contractors in March 2021.