As news reports suggest that the man behind the mass shooting in Plymouth identified as an “incel”, Sian Norris reveals the extremist misogynistic ideology that fuels the movement

The horrific shootings that took place in Plymouth have shocked the nation, as it was revealed that six people – including the killer and a very young girl – were shot dead on Thursday evening.

It is too early to say what the motivations were behind the worst mass shooting in the UK since 2010. However, videos created by the perpetrator, Jake Davison, on YouTube suggest that he appears to affiliate with the ‘incel’ community – a misogynistic online sub-culture of men who identify as ‘involuntary celibates’ because they feel sexually rejected by women.

Davison also apparently identified as ‘Black Pill’ – a common status among incels. Black Pill is a spin-off of the Red Pill men’s rights community that encourages men to become ‘alpha males’ via gaming women into sex and by getting fit. In contrast, Black Pills share a fatalistic outlook in which they believe that success with the opposite sex is determined by genetics.

In one shocking outburst, Davison said: “Why do you think sexual assaults and all these things keep rising? The reality is that women don’t need men no more and they certainly don’t want and don’t need average men and below average, you have to go abroad to fund [sic] a woman.”

If it is indeed the case that Davison identified with the incel sub-culture, the murders form part of a growing and terrifying pattern of attacks by men from this community who have killed an estimated 50 people in the US and Canada.

However, these killings are rarely categorised as terrorist incidents – despite evidence that members of this community are being radicalised and committing violent acts to advance their misogynistic, white supremacist ideology. 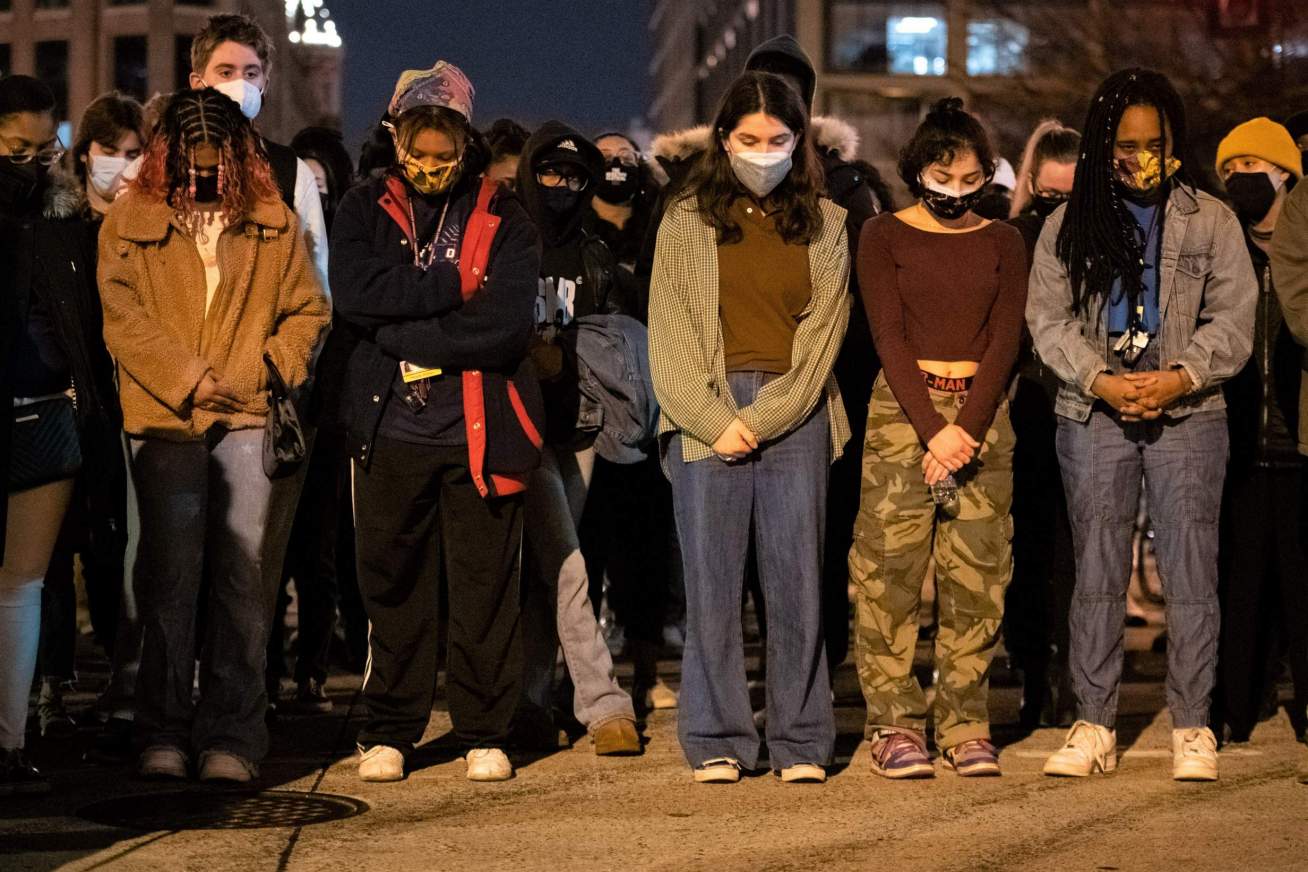 The incel community initially blossomed on the Reddit website, before being banned and moving onto independent forums where men swap memes, discuss whether to have the Coronavirus vaccine, and share violent and hateful views about women and women’s sexuality.

The driving force behind the movement is a belief that men are entitled to women’s bodies – both as a sex object and a reproductive vessel.

Initially, men who identified as incels claimed to believe that they had been sexually rejected by women in favour of popular jocks known as ‘Chads’. In contrast, the incels saw themselves as good guys, who had been “friendzoned” by women – i.e. seen as a platonic friend not a potential sexual partner.

However, this is potentially a simplification of what is ultimately an extremist misogynistic space riddled with white, male supremacy, violent ideology and even paedophilic fantasies.

It is a sub-culture in which men are radicalised to hate women, and where far-right conspiracies such as the ‘Great Replacement’ are shared and promoted.

The language used by incels dehumanises women – commonly recognised as the first step towards violence and even mass killings or genocide. They talk about women and girls as ‘foids’ – short for ‘femoids’ – as well as referring to women as ‘toilets’. One post referred to “toilets riding the Chad c**k carousel”. Women are known as toilets because they are seen as receptacles of bodily fluids.

Other incels refer to putting vaginas ‘on leashes’; sending women to ‘the slaughterhouse’; and imagine putting grenades up women’s anuses. They refer to women as ‘rape fuel’ and ‘scum’, and fantasise about having a ‘prime white virgin harem’. One man, in a thread about expressing fantasies, wrote that “every man would be guaranteed a wife”; while another put it succinctly: “Women shouldn’t have rights anyway.”

Many discussions on the forums involve men fantasising about ‘jail bait’, i.e. sex with girls under the age of consent. Girls who are categorised in this way are considered desirable because ‘they are still innocent before they ruin themselves’.

One poster said that he wasn’t attracted to “jail bait until I became an incel”. Another wrote that he “slowly but surely found myself attracted to JB foids” after joining the incel community, suggesting men are being radicalised to accept abuse of girls as normal.

The incel sub-cultures, and wider men’s rights activism spaces, are also often a gateway to white supremacist movements. Journalist Aja Romano wrote in 2016 how, for these communities of angry young men “who ultimately feel threatened and rejected by women, the movement promotes a sense of male entitlement that is easily radicalised into white nationalism and white supremacy”.

Posters often use graphically racist and anti-Semitic language, and there is an obsessive focus on ‘foids’ having sex with black and ‘Arab’ men.

The racialised nature of much incel content fits into conspiracist narratives that the West or Global North is apparently in decline and degenerating as a result of women’s sexual and reproductive freedoms, along with migration from the Global South.

In this respect, incel culture is close to the baseless far-right Great Replacement conspiracy theory, which posits that feminism is colluding with Western elites to repress the white birth rate and encourage immigration in order to create a ‘white genocide’.

For example, on a thread titled “women destroying cultures and countries”, one incel synthesises the Great Replacement, misogyny and racism by writing “the antifa and femoids support the invasion of africans and arabians [sic] in ALL Europe. In 50 years, thanks to the ‘diversity’… agenda, all Europe will turn into a third world s**t hole full of wars and Sharia law everywhere”.

Four years later in Canada, Alek Minassian killed 10 people by driving into a pavement. He said that he drew inspiration from the incel movement and posted on Facebook “all hail the Supreme Gentleman Elliot Rodger” – the moniker given to the mass shooter and other men admired by the community, including Supreme Court Judge Brett Kavanaugh.

The incel movement has now killed an estimated 50 people in the US and Canada, including a mass shooting in a massage parlour in Georgia; a machete attack at a Toronto massage parlor; and a shooting at an Arizona mall which injured three people.

In June, US President Joe Biden laid out his formal strategy to combat domestic terrorism – including threats from emerging extremist movements such as incels and the followers of the QAnon movement. A Californian man who confessed to killing his children referred to the conspiracy, while a pattern of violence is linked to the theory.

Incels responded on a thread about “creepy Uncle Joe”, criticising Biden’s move as “incelophobia” and claiming that feminists “are using violence to spread their message” while “us incels are pretty tame”.

“In a world full of w****s the virgin is frowned upon”, posted one individual.

According to the Crown Prosecution Service – the body that decides which criminal cases are prosecuted in England and Wales and conducts the prosecutions – for an offence to be classed as terrorism in the UK, it must be designed to “influence any international Government organisation or to intimidate the public”. It must also “be for the purpose of advancing a political, religious, racial or ideological cause”.

The latter point has often meant that misogynistic and incel-related violence is not classed as terrorism. But this is to miss the point that incels are driven by a white, male supremacist ideology that positions men as superior to women and promotes the belief that men have sexual and reproductive entitlement to women’s bodies. This is a belief linked to fascism.

Further, as is evidenced by the posts about ‘jail bait’ and the Great Replacement theory, incel websites are spaces of radicalisation to this male supremacist and ultimately violent ideology.

As one man put it: “I’ve learned to hate women, feminism and their sexual choices so much.”