The latest appointment to the BBC’s executive team said the Prime Minister has ‘all too often been misunderstood and maligned’ only four months ago, reports Sam Bright

It is an unwritten rule of political life that you can only switch once between journalism and party politics – at the very least until there has been a change in the party of government.

Imagine the chief spin doctor for a Conservative Prime Minister, for example, almost immediately bouncing into a senior role at the BBC – the UK’s ostensibly impartial public broadcaster. What would that say about the corporation’s independence?

Yet this is exactly what has happened in the case of Sir Robbie Gibb.

Formerly a BBC political journalist for 25 years, serving as the head of BBC Westminster in recent times, Gibb jumped ship in 2017 and was appointed as Theresa May’s director of communications – the same position held by Alastair Campbell under Labour Prime Minister Tony Blair.

When the Conservative Party ousted May in 2019, Gibb was similarly relieved of his political duties – though not before he was nominated for a knighthood by the outgoing Prime Minister, for “political and public service”.

Yet, reversing his career trajectory, the journalist-turned-advisor has been awarded a new job at his old stomping ground – appointed to the BBC board. Gibb is one of four non-executive appointments made by the Department of Culture, Media and Sport (DCMS).

“The Corporation has a big job to reform and make sure it once again becomes the gold standard for broadcasting impartiality,” Gibb said, after his appointment. “I am privileged to have the chance to play a part in helping the BBC achieve that.”

Yet, it is difficult to see how Gibb’s quest for a golden age of BBC impartiality is not self-defeating, given his close affiliation to one political party.

Indeed, while one of the central demands of political journalism is to hold power to account, Gibb has publicly expressed glowing admiration for Prime Minister Boris Johnson in recent times – even going so far as to say that he has been portrayed unfairly by the media.

Writing in December 2020 for the website ‘Conservatives in Communication,’ Gibb lauded Johnson’s Withdrawal and Trade agreements with the EU, which formalised the UK’s departure from the bloc. “This momentous deal not only marks a new chapter in Britain’s history but will rightly stand as a historic triumph for a Prime Minister who has all too often been misunderstood and maligned,” Gibb wrote.

Venerating the Brexit project, Gibb carried on to claim that: “We have a zero tariff deal that restores our sovereign rights in full. We will no longer have to align with EU rules nor will we be subject to the European Court of Justice.

“Our Parliament will be free to set its own laws, we will no longer have to pay into the EU coffers and we can set our own immigration policy.”

Indeed, it seems as though Gibb holds deep personal admiration for Johnson. “Mr Johnson has shown why the British people continue to keep their faith in him and why the polls have held up so well for the Government,” he wrote. “In his heart, the Prime Minister is a man who wants to unite not divide. For of all the myths about him there is none greater than that which seeks to portray him as a leader who revels in controversy and division – the very opposite is the case.”

Gibb has also backed Johnson’s Government in certain disputes with the BBC. Interviewed last year by the right-wing think tank, the TaxPayers’ Alliance, Gibb criticised Radio 4’s Today programme, suggesting their interviews with politicians were only designed to attract social media shares. He thus supported the Government’s decision to boycott the programme – a decision that has now been reversed.

“It was only working for the programme, so they would get retweets,” he said. “So I think the Government is entirely right to basically call them out on it.”

Byline Times approached the BBC to ask what procedures were followed on political interests and editorial impartiality, in relation to the appointment of Gibb. Specifically, we asked whether the Chief Advisor, Politics, had been consulted – given that the BBC’s Editorial Guidelines read:

“Anyone is entitled to be a non-active member of a political party or organisation.  However, there are some roles (for instance, those involved directly in political coverage) where public disclosure even of dormant membership may risk compromising perceptions of the BBC’s impartiality. In line with the Editorial Guidelines, managers or individuals should seek the advice of the Chief Adviser, Politics, where appropriate, to discuss individual circumstances.”

However, the BBC said that Gibb’s appointment was a matter for the DCMS. Generally speaking, board members are governed by a code of practice, which says that: “The Board has a duty to uphold and protect the independence of the BBC, and ensure the Corporation promotes its public purpose of providing impartial news and information.”

Gibb has not been shy from offering his political viewpoints, or from associating himself with controversial projects, since making the trip from New Broadcasting House to Downing Street in 2017.

In an article for the right-wing Daily Telegraph, he wrote that, “The BBC has been culturally captured by the woke-dominated group think of some of its own staff. There is a default left-leaning attitude from a metropolitan workforce mostly drawn from a similar social and economic background.”

Gibb also served as an early lynchpin in the creation of new current affairs platform GB News. It has been reported that Gibb led the fundraising drive for the platform in late 2020. The Mail on Sunday cited a GB News source, confirming that Gibb was a driving force behind it, including “leading efforts to raise money” for the group. In September 2020, Guido Fawkes corroborated the story, reporting that Gibb had “set up” GB News.

A GB News source told Byline Times that, since then, Gibb has left the venture and is no longer associated with it. GB News’ online content will be spearheaded by former BBC presenter Andrew Neil, whom Gibb worked closely with at the corporation. It has been reported that Neil will present a nightly show featuring a segment called ‘Woke Watch’.

At the time that Gibb helped to set up GB News, he was in a business partnership with John Woodcock, who sits in the House of Lords as Lord Walney, and William Shawcross, the former Charity Commission chairman. In April 2020, both Woodcock and Shawcross were part of a successful bid by the JC Acquisition Ltd consortium led by Gibb to take over the Jewish Chronicle. 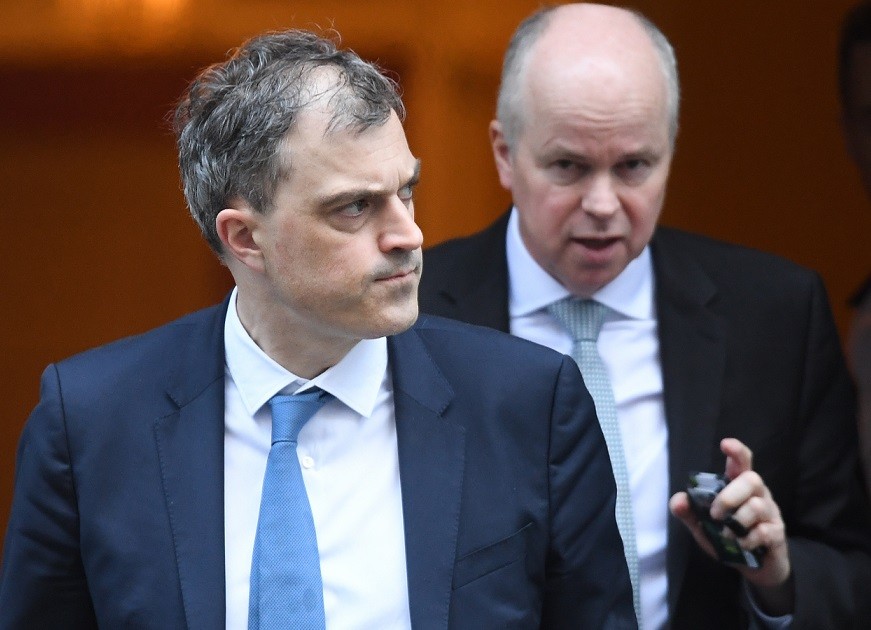 Woodcock, a former Labour MP who stood down from the Labour Party in 2018, has been appointed to two Government advisory roles since Boris Johnson’s election to Downing Street, while Shawcross has been appointed by Priti Patel to review the controversial counter-terrorism ‘Prevent’ strategy.

Yet Gibb is not the only BBC board member with a history of links to the Conservative Party. Newly-appointed BBC Chairman Richard Sharp has in the past donated more than £400,000 to the party. Sharp spent 23 years working for New York banking giant Goldman Sachs and reportedly oversaw the work of Rishi Sunak, during the now Chancellor’s early career in the finance industry.

Sharp has also since 2002 been a director at the Centre for Policy Studies – a right-wing think tank that has published studies calling for the abolition of the licence fee and accusing the BBC of having a left-wing bias.

Sharp’s appointment followed that of Tim Davie, who was announced as the corporation’s new Director General in September last year. Davie stood as a councillor for the Conservative Party in 1993 and 1994, and was deputy chairman of the Hammersmith and Fulham Conservatives in the 1990s.

Reporting on the appointment of Gibb to the BBC board, the corporation’s Media Editor, Amol Rajan, said his appointment “clearly strengthens the BBC’s links not just with Westminster, but with the Conservative Party specifically.”

This certainly seems to be the case.

“Sir Robbie Gibb was appointed following a fair and open competition. His skills and experience best met the published selection criteria for the role,” a DCMS spokesperson said. “The rules clearly state that political activity should not be a bar to appointment and Sir Robbie demonstrated his commitment to the independence, mission and public purposes of the BBC.”