Why are thousands of people regularly protesting on the streets of London against measures proven to protect people and save lives?

Early on in the COVID-19 pandemic, an insidious narrative began to emerge, one that transformed certain people’s view and response to the health crisis and has persisted to this day. It’s message, in essence, was that the vulnerable, and those with underlying health conditions, were suitable scapegoats, necessary victims that could be sacrificed in the pursuit of ‘freedom’.

Last April, the BBC’s health correspondent Nick Triggle wrote an article trying to make sense of the increased death rates in the UK, asking “to what extent the virus is causing the death”, and what impact COVID-19 might have on overall yearly mortality rates. The article suggested that previous health conditions, or old age, were key factors in making people die “more quickly” – rather than those deaths being “spread over the course of a year” – and, because nine out of 10 people who died had pre-existing health conditions, they were “at heightened risk of death anyway”.

As the pandemic progressed, right-wing voices began to twist and distort mortality data in order to further their claims that lockdowns don’t work and that the Government had a responsibility to fully open the country back up. Commentators from the Daily Mail, talkRADIO, the Sun and others continued to ramp up the rhetoric that COVID-19 only really killed the elderly and those with pre-existing health conditions, arguing that the danger to ‘healthy’ people was minimal.

Added to the mix was the so-called ‘naturally-acquired herd immunity’ approach, which plagued the Government’s initial response to the crisis. It advocated that the elderly and vulnerable could be shielded from the disease while letting it spread among the population at large – theoretically building up widespread resistance. It is an approach which has never before been used in epidemiology except through vaccination.

Yet, influential figures from disinformation groups such as the Great Barrington Declaration had the ear of the Prime Minister and the Chancellor. As Byline Times has previously reported, the people who lobbied the Government with this misinformation have power, money and influence.

Such influence results in the kind of anti-lockdown, anti-mask protests London has seen this year. Whilst such protestors believe that they are pursuing truth, justice and freedom, they are actually engaged in is a standard form of human behaviour that has been around since we first evolved and formed communities. 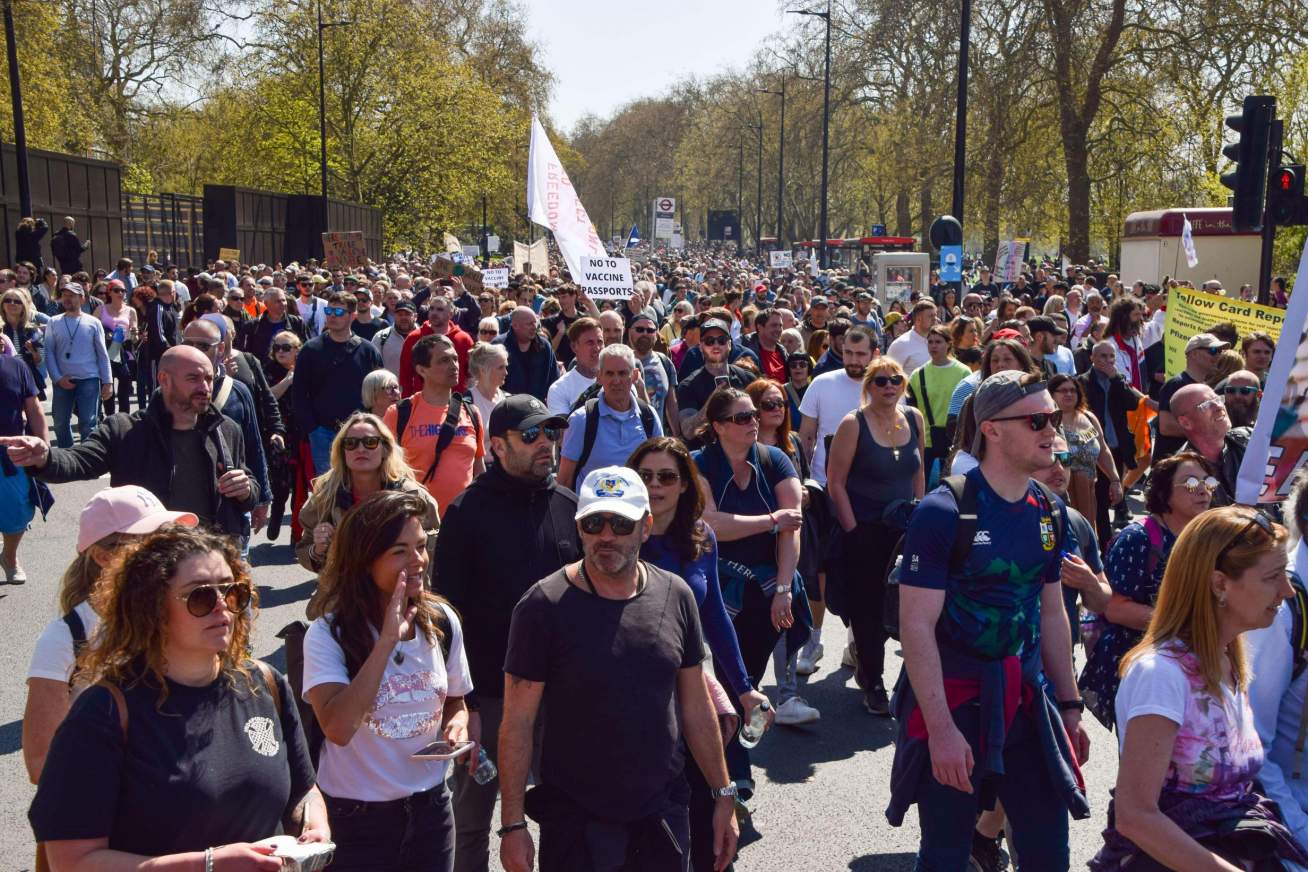 Anthropology and literary criticism has taught us that ancient communities gathered around the victimage mechanism.

The murder of a victim bound communities together via their unanimity of judgement; the act of violence cathartic, whereby collective fear and rage is poured out upon an ‘other’ – the scapegoat. It is the discovery of the scapegoat that prevented ancient communities from tearing themselves apart during destabilising moments of crisis.

These moments developed unconsciously through mimetic rivalry – the process by which we imitate one another in our desires, each of us desiring the other’s desires, until we are ‘doubles’, and there is escalating violence and the breakdown of social cohesion.

The arbitrary and spontaneous selection of the scapegoat, and the irresistible discharge of collective fury, enables the community to find solidarity within the act of sacrifice. Such is the power of the unanimity, and the resulting ‘miraculous’ resolution of the crisis, that people often viewed the scapegoat as both cursed and divine – the cause and cure of their fear and conflict. Myths were created around the victim to justify the murder, their death seen as an act that brought life to the community.

Ancient communities developed the practice of sacrifice, with strictly controlled scenarios that replicated the ‘founding murder’, enabling the community to maintain a sense of order. This is where religion, ritual and taboo emerged from.

Any crisis that arose was regarded as a failure to maintain the law; a sin of transgression; a curse of the gods, thus destabilising the community once again. Only a sacrifice to the gods resolved the crisis.

But what these communities failed to recognise – as we continue to fail to recognise today – is that it is our rivalry, our undifferentiation due to common desire, that leads us into conflict. When we are all the same, all after the same thing, someone ends up dying.

I have previously argued that freedom and choice are not the same thing. That freedom is the ability to love our neighbour. Yet, anti-lockdown protestors, COVID sceptics and anti-vaxxers believe that freedom is autonomous choice and it is the loss of that freedom which is of greatest concern.

Those protesting on the streets want the Coronavirus restrictions to end, even though this would allow the virus to freely circulate throughout the population, in order to reclaim that which they believe has been lost. Or, to put it differently, they are willing to sacrifice the vulnerable to solve the crisis.

The Coronavirus pandemic is a crisis of horrifying depths. It has resulted in a devastating death toll and long-term health complications for thousands of children and adults. Even faced with more than 150,000 deaths in the UK, these protestors create myths; stories that justify or remove these deaths in order that scapegoats can continue to be sacrificed upon the altar of autonomous choice.

Just as ancient communities collectively stoned to death their chosen victim in order to appease the wrath of the gods, so lockdown sceptics are willing to collectively spread COVID among the community, inevitably leading to further death. Myths are then created around these deaths, just as the ancients would do, to hide culpability and view the victim as guilty.

In this case, elderly and ill people are ‘guilty’ because of their vulnerability – ‘they were going to die anyway’. And, in this way, untimely and unnecessary deaths are hidden behind lies, cruelty and wilful negligence.