Mike Buckley speaks to experts about how an intersection of factors, which go beyond concerns around identity and Brexit, are contributing to the current unrest

The Good Friday Agreement of 1998 brought relative peace to Northern Ireland after three decades of conflict that cost more than 3,500 lives. Though the peace enabled by the Agreement was only ever partial – violence endured but at much reduced levels – it was far better than what had gone before it.

For violence and community tensions to reduce further, Northern Ireland needed leaders that, like those of 1998, would value compromise; recognise the need to build a shared identity instead of inflaming division; and would understand the need to produce a shared peace dividend evidenced by reduced deprivation, investment and growing prosperity.

Instead, Northern Ireland has sadly continued to suffer.

The past week’s violence there has largely been attributed to the Northern Ireland Protocol – the part of Boris Johnson’s EU Withdrawal Agreement which creates a customs border between Northern Ireland and Great Britain.

“Unionists feel betrayed by the British Government,” said Katy Hayward, professor of political sociology at Queen’s University Belfast. “They feel that Northern Ireland’s place in the Union is very much under pressure, so that sense of insecurity definitely raises the stakes.”

Many unionists believe that Brexit itself “was a breach of the Good Friday Agreement”, according to Owen Reidy, assistant general secretary of the Irish Congress of Trade Unions, arguing that the Agreement was only possible because of shared EU membership by the UK and the Republic of Ireland and the removal of borders enabled by the creation of the Single Market in 1993. 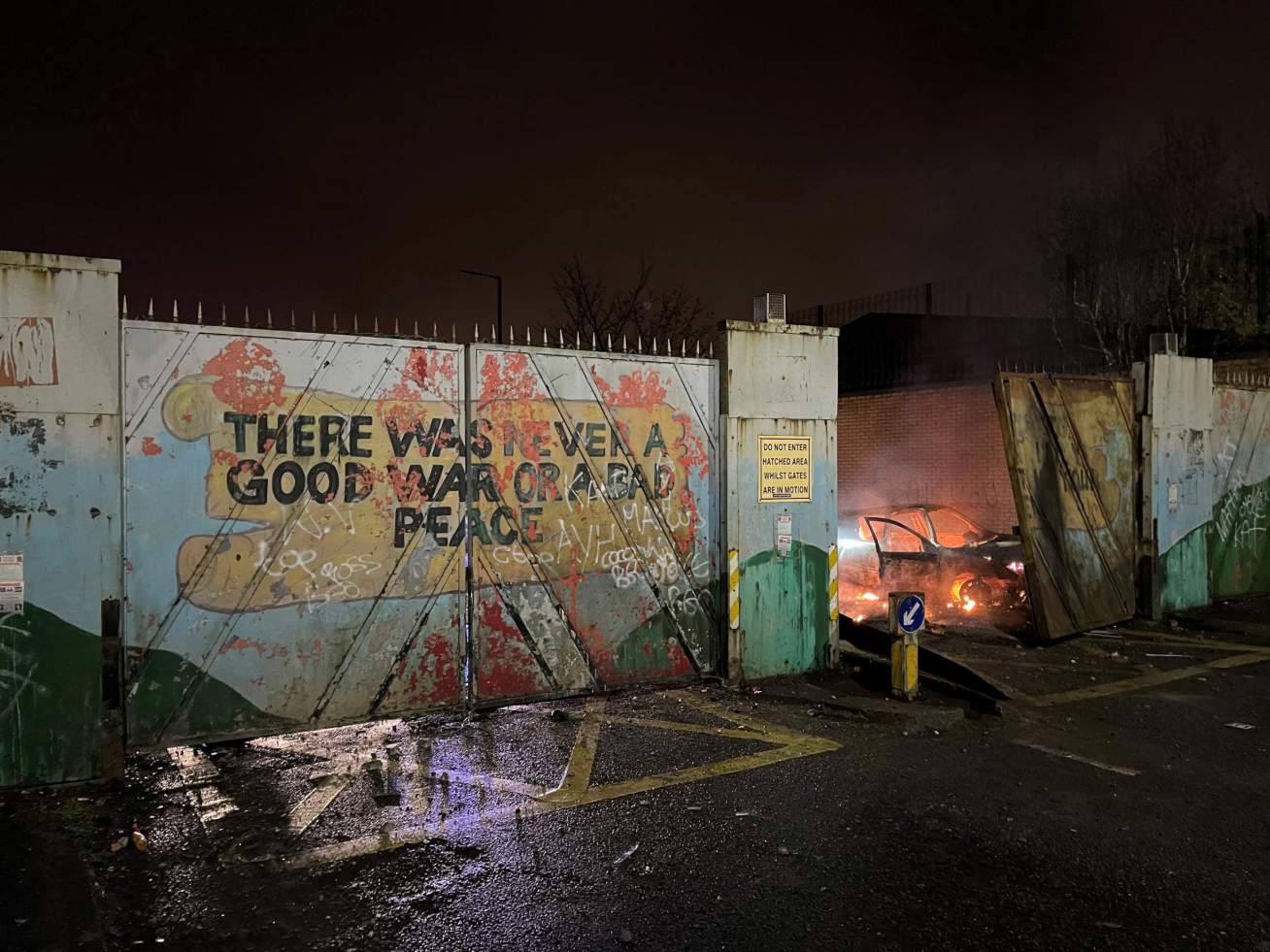 Project FearThe Writing Was Always on the Wall

The Protocol is a undoubtedly a key cause of the violence. The Loyalist Communities Council, an umbrella group representing loyalist paramilitaries, said in a statement that they had not been involved in the violence but nonetheless criticised a “spectacular collective failure” to understand their anger over Brexit, calling for the border protocol to be renegotiated.

“We have repeatedly urged HM Government, political leaders and institutions to take seriously our warnings of the dangerous consequences of imposing this hard border on us and the need for earnest dialogue to resolve matters,” it said. “We reiterate that message now.”

Unionist political leaders could calm tensions in their communities by promising to work with Republicans, London and Dublin to make the operation of the Protocol less onerous. They could push for realistic additions such as a veterinary agreement between the UK and EU which would remove the need for many checks on incoming food and agricultural goods.

Instead, they are using anger over the Protocol to entrench division and create unrealistic expectations. The Stormont Assembly will vote on whether to continue the Protocol in 2024. Unionist leaders are promising to vote it down in the hope that this will shore up support in next year’s Assembly elections, fearful of losing support to other Unionist parties or the non-sectarian Alliance Party, support for which has grown in recent years.

In reality, if Stormont rejects the Protocol, the EU and UK would have two years to negotiate a replacement. If a political solution is to be found, unionists will have to live with the Protocol until at least 2026. Even then, there is no guarantee that a new system would be to their liking. Without a change of stance in London, including renewed willingness to sign up to EU structures and regulations, the Protocol – or something like it – is unavoidable.

The protestors’ solution, said Katy Hayward, is to make the Protocol unworkable. Attacks or even the threat of attacks on border infrastructure would make them unusable. Border control posts were on alert as early as 22 January after threatening graffiti was found. “All border post staff are targets,” it read, prompting operators to suspend checks.

“The UK and EU could establish an assembly to consult on the Protocol and potential changes which might make it more acceptable to different communities,” Hayward said, “but unionists don’t want to be complicit.”

Stephen Farry, the North Down MP for the centrist, cross-community Alliance Party, agreed. “The problem is that unionism has decided to frame the Protocol as an identity issue,” he said, “and it’s very hard to see how you get round that and put the genie back in the bottle.”

The causes of the past week’s violence go beyond Brexit and the Protocol, according to Owen Reidy.

The Good Friday Agreement was only ever partially implemented. For much of the last 20 years, Stormont has not been operational because unionist and republican parties have refused to work together. Its absence during Brexit negotiations meant Northern Ireland had no representative voice at the table.

Reidy also points to the civil society engagement promised in the Agreement but which was never implemented. The lack of engagement with trade unions, employers and communities has given politicians too much control, which they have not always used wisely.

Just as important are socio-economic factors that politicians want to ignore but which create the conditions in which extremism can thrive: “Northern Ireland has the highest proportion of deprivation of the 12 UK regions,” he said. “We have the lowest average wages in the UK. One in four workers earn below the real living wage. There is high deprivation in unionist areas but the DUP (Democratic Unionist Party) have done little to change it. These communities haven’t seen anything like the peace dividend they need to see.”

Alliance Party MP Stephen Farry agrees, saying that the combination of unionist angst over Brexit and long-term structural issues caused by the continuing sectarian segregation of Catholic and Protestant housing and education in working-class communities, alongside persistent areas of poverty, make it hard to see a way through.

Northern Ireland needs more money from Westminster, according to Reidy. Public spending per head is the lowest in the UK and below spending in the Republic of Ireland. But any additional money should be used to create better employment, higher wages and reduced deprivation.

Reidy believes that political division in Stormont prevents politicians using devolved powers to improve lives. Unlike Scotland and Wales, for example, employment rights are devolved, but Stormont ministers have not used their powers to improve conditions or pay – even though doing so would take one pressure away from communities and make it easier to deal with identity and political issues.

BREXITThe Fracturing of British Identity& a Warning From Ireland

The days since the recent violence began have seen finger-pointing on all sides, with calls for politicians in London, Dublin, Brussels and Belfast to act. Commentators and politicians alike have picked out a single cause or solution which fits their agenda instead of recognising that today’s violence is more complicated than the Protocol or Brexit alone, and reflects the fact that a longstanding conflict remains unresolved while entrenched poverty continues to blight too many lives.

There is no doubt that Boris Johnson bears responsibility for wilfully inflicting the Protocol on unionists in full knowledge that it would inflame tensions. His refusal to hold a summit with the Irish Government to discuss ways to resolve the violence is a dereliction of his duty to uphold the Good Friday Agreement. But it is just as true that Dublin and Brussels knew what they were signing up to in 2019. All parties entered the agreement with their eyes open.

Politicians in Belfast must also take their share of responsibility, believes Reidy. Northern Ireland, he said, cannot always wait for London, Dublin or Washington to solve its problems. Its own leaders need to shoulder their responsibility and work together rather than in opposition to each other’s parties and communities.

Stormont leaders have the power to set up a forum in which republican and unionist communities could discuss changes to the Protocol, ideally with business leaders, trade unions and politicians from all sides. Their failure to do so creates the conditions in which violence is seen as the only available option available. More broadly, they should act to improve lives and reduce deprivation instead of using identity issues to distract from their failure in government.

Political will, courage and a willingness to recognise the views of others created the context in which the Good Friday Agreement could be built in 1998. If peace is to endure in Northern Ireland, it needs politicians of a similar calibre today in Brussels, London, Dublin and Belfast. Without them, Northern Ireland faces an uncertain future.