When the citizens of Hong Kong took to the streets in 2019 to demand China ended its attempts to infringe on their most basic human rights, they were confronted by heavily armed police officers, thousands of rounds of tear gas, rubber bullets and arbitrary detention.

The neon-drenched streets soon resembled war zones and the Hong Kong Police Force showed China that it did not need to go through with its threats of deploying troops to the streets – the police force had become just as effective.

Less than a year later, the people of Nigeria, inspired by the Black Lives Matter campaign sweeping the globe, demanded that their Government disband its Special Anti-Robbery Squad (SARS) which had been operating without any accountability. In a matter of months, at least 56 people were killed in clashes with the country’s security forces.

Likewise, in Colombia, people launched protests against inequality and police brutality, leading to the death of 13 people and leaving 400 injured. In Egypt, more than 500 protestors were detained for calling for Government reform, while others were met with tear gas, batons and live rounds.

In almost every one of these cases, the UK Government condemned the violence.

In Hong Kong, China was accused of violating the Sino-British Joint Declaration and city officials were urged to engage in a dialogue with protestors. Foreign Secretary Dominic Raab said of the violence in Nigeria that the Government “must urgently investigate reports of brutality at the hands of the security forces”, and Wendy Morton, Parliamentary Under-Secretary in the Foreign Office, said that the UK supports “the right of all Colombians to protest”. 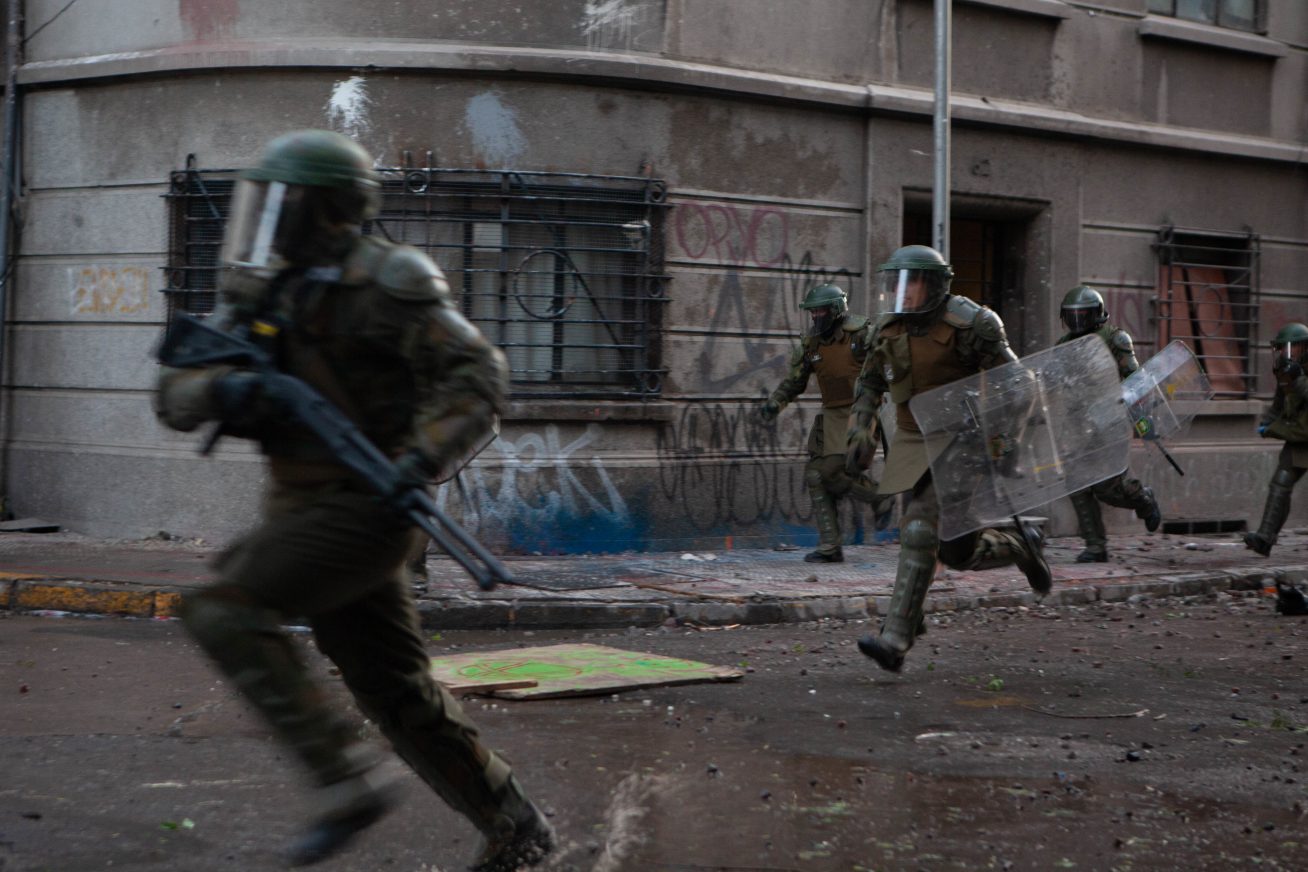 But what Government officials kept quiet was that the training of the security forces involved in each crackdown could be traced to the UK’s College of Policing.

Founded in 2012, the college states that its aim is “to provide those working in policing with the skills and knowledge necessary to prevent crime, protect the public, and secure public trust”.

It has given training and assistance to at least 78 countries, including many forces accused of torture and other abuses. This includes at least 12 countries listed by the Government as “human rights priority countries”, which include Afghanistan, Bahrain, China, Colombia, Egypt, Libya, Pakistan, Rwanda, Saudi Arabia, Somalia, Sri Lanka and Sudan.

There are also a number of countries not on the priority list which have been accused of torture including Brunei, Hong Kong, India, Nigeria, Oman, Qatar, Thailand, the United Arab Emirates and the US. A Freedom of Information (FOI) request by the Campaign Against Arms Trade (CAAT) found that training for forces in Bahrain, Hong Kong, Nigeria and Oman happened as recently as 2019.

When Byline Times asked the Government in an FOI last year whether the College of Policing had been involved in the training of security forces in Chile, it was told that revealing this “would be likely to prejudice relations between the United Kingdom and other states if it was disclosed”. This was despite protestors facing a level of violence not seen since the days of military dictator General Augusto Pinochet.

After the UK’s involvement in training the Hong Kong Police was made public, the Government announced that it would be suspended, however, the training of Nigerian forces appears to have continued. Conservative MP James Duddridge said in November that Nigeria’s now disbanded SARS force had been given “strategic assistance”.

Britain’s support for the training of repressive forces does not end with law enforcement. It is also heavily involved in supporting brutal militaries around the world – even some facing accusations of war crimes.

This indicates that, even in 2017, when the then International Development Secretary Penny Mordaunt warned that a Saudi blockade of Yemen indicated that the kingdom was “using starvation as a weapon”, it was the UK’s own military helping to train the sea, land and air forces responsible. The blockade, which Mordaunt went as far as to say was a violation of international law, severely restricted the flow of food, fuel, and medicine to civilians. With 90% of Yemen’s basic needs depending on imports, the blockade is widely regarded as a major factor in why millions of children are now facing starvation and many more are suffering from preventable diseases such as cholera and diphtheria.

A parliamentary question from July 2020 revealed that the training of Saudi forces is just the tip of the iceberg and that, between 2018 and 2020, the UK has provided similar training to 17 countries that were identified as “human rights priority countries”. This includes “officer training” in China, an “urban operations” course in Bangladesh, sniper training in Bahrain, and commando training in Egypt.

When asked in January if the Government plans to review whether this training contributes to “internal suppression of civilians”, it said that all training includes an assessment of risks including those linked to human rights.

Labour MP Kate Osamor, who heads the Commons’ All-Party Parliamentary Group on Nigeria, has also called for accountability and an independent investigation. She has suggested that all military and police training should be suspended. So far, this appears to have been ignored.

“There’s nothing inherently wrong with the UK providing military training to other countries, but it appears to be so lightly monitored as to be a virtual free-for-all,” Oliver Feeley-Sprague, Amnesty International UK’s military, security and police programme director, told Byline Times.

“The Government claims it conducts risk-assessments over its training, but if Bahrain, China, Saudi Arabia and Sudan can receive UK military training – who, if anyone, would be excluded?

“The provision of military training and assistance should be licensed in the same way as the export of arms and security equipment, with a legal obligation on ministers and officials to decline licences where there’s a clear risk that UK training could lead to military and security forces around the world carrying out fresh atrocities.”