A week after the deadly assault on the US Capitol, Caroline Orr reports on the prospect of the first sedition prosecutions for 25 years

“Hundreds” of pro-Donald Trump rioters could face charges as serious as sedition, conspiracy and murder in connection with the deadly riot at the US Capitol, federal officials have said at the first televised briefing on the incident.

Six days into the investigation, the public has only seen the “tip of the iceberg” when it comes to evidence, according to the FBI, and the worst is yet to come.

Federal prosecutors have already launched investigations into more than 160 people as part of an extensive probe into last week’s violent attack on the US Capitol, officials said on Tuesday, adding that they expect that number to grow “into the hundreds”.

“In six days we have opened over 160 case files, and that’s just the tip of the iceberg,” Steven D’Antuono, assistant director of the FBI’s Washington DC field office, said at a news conference. “The significance of this investigation is not lost on us. This is a 24/7, full-bore, extensive operation into what happened that day.”

So far, officials have brought charges against more than 70 people in connection with the violent attack that left five people, including a police officer, dead and forced the entire US Capitol complex to go into lockdown as pro-Trump rioters breached police barricades and proceeded to storm and occupy the building.

If charged and convicted, the pro-Trump rioters would be the first individuals found guilty of sedition since October 1995.

Those individuals face charges ranging from trespassing and property destruction to assault and weapons charges, but investigators say they are building a case for much more serious charges, including murder and sedition.

“This is only the beginning,” Michael Sherwin, acting US Attorney for Washington DC, said at the briefing. “We are looking at significant felony cases tied to sedition and conspiracy.”

The federal criminal code defines sedition as an effort by two or more people to conspire to overthrow the US government by force. The crime carries a sentence of up to two decades in prison.

If charged and convicted, the pro-Trump rioters would be the first individuals found guilty of sedition since October 1995, when 10 people were convicted of seditious conspiracy in connection with the 1993 World Trade Centre bombing.

At least 25 people, including members of the military, are reportedly under investigation on terrorism charges in connection with last week’s violent attack, and federal officials have said that they are approaching the investigation as a “counter-terrorism and counter-intelligence” matter, throwing extensive resources into the effort to identify participants and track their every move ahead of the event.

“We’re looking at everything: money, travel records, disposition, movement and communication records,” Sherwin said. Among other things, investigators want to determine whether rioters were working in coordination with some sort of “command and control centre”, which could increase the severity of the charges.

“Our office organised a strike force of very senior national security prosecutors and public corruption prosecutors,” Sherwin said. “Their only marching orders from me are to build seditious and conspiracy charges related to the most heinous acts that occurred in the Capitol.”

Sherwin also said that reporters were targeted and assaulted by some of the violent Trump loyalists at the riot and that a special task force had been set up to look into those incidents.

The FBI is also still investigating who planted pipe bombs that were discovered at the Democratic and Republican party headquarters during the riot.

Officials did not say whether they plan to pursue charges against those who helped to incite the violence but did not directly participate in the planning or carrying out of the attack. However, part of the probe is focused on social media posts and other online activity ahead of the riot, suggesting that investigators may at least be looking into people who instigated the deadly assault without participating in it. 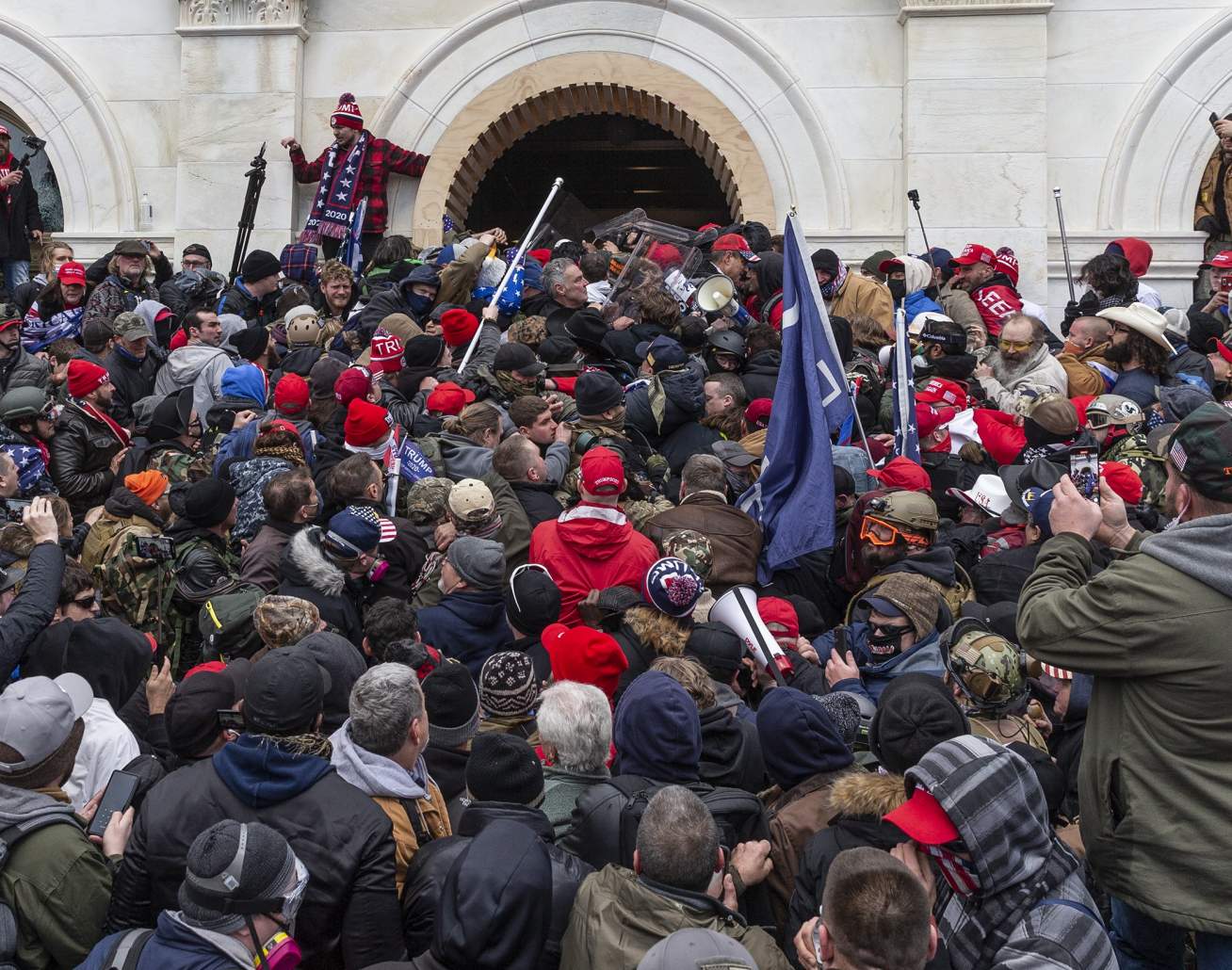 In the seven days since the riot, the FBI has already looked at more than 100,000 pieces of digital media submitted in response to a call for tips. That includes social media posts, comments and videos in which individuals discussed plans to travel to Washington DC and encouraged each other to bring weapons and to prepare to use violence if necessary.

The FBI was reportedly aware of some of these threats and included them in an internal report issued on the day before the riot – contradicting earlier claims that the FBI had no intelligence indicating anyone was planning violence ahead of the attack. The report cited social media posts in which pro-Trump users instructed people to “get violent” and prepare for “war” and even death in defence of Trump.

The incendiary rhetoric cited in the FBI report echoes that of Trump and members of his inner circle, several of whom issued their own threats and calls for physical confrontation at a rally just hours before the crowd stormed the Capitol.

Two of Trump’s top allies – along with his son Don Jr. – are reportedly under investigation by the Washington DC Attorney General, who has said that he is considering whether to bring riot incitement charges against the three men for their remarks at the rally. He also left open the possibility of launching a related investigation into Trump himself.

With numerous investigations already underway and new lines of inquiry being added every day, officials say that the public hasn’t seen the worst of it yet.

“People are going to be shocked at some of the egregious contact that happened,” Sherwin said. He concluded with a message for participants in the violence, warning:  “You will be found.”