The ‘MAGA’ Civil War has Begun

CJ Werleman argues that, with Donald Trump’s influence unlikely to wane soon and millions of people believing that the 2020 US Election result is illegitimate, his ‘Make America Great Again’ coalition will be going nowhere

Tens of thousands of radicalised right-wing Donald Trump loyalists descended on Washington DC on 6 January with the intent of overthrowing the US Congress and the result of a free and fair election.

The United States – and the rest of the world for that matter – should not be lulled into viewing the storming of the Capitol as a solitary lightning strike, however, but as the opening salvo in what promises to be a violent, protracted and diffuse civil war, a now inescapable reality given the mass radicalisation of tens of millions of right-wing Americans.

The assault on the Capitol wasn’t spontaneous – it did not suddenly spring from a peaceful protest gone awry. Those involved had not arrived from all over the country to politely voice their anger. They were there for one purpose only: to threaten, kidnap or kill elected members of the Congress and block the certification of Joe Biden’s victory. Most significantly, they were there because the leader of the plot – President Donald Trump – had implored them to take action.

In the month leading up to 6 January, ‘Storm the Capitol’ was posted more than 100,000 times in viral tweet threads that discussed taking over the Congress and outlined details for entering the building. Calls for “occupying the Capitol” with weapons were also plastered over thousands of right-wing online message boards. 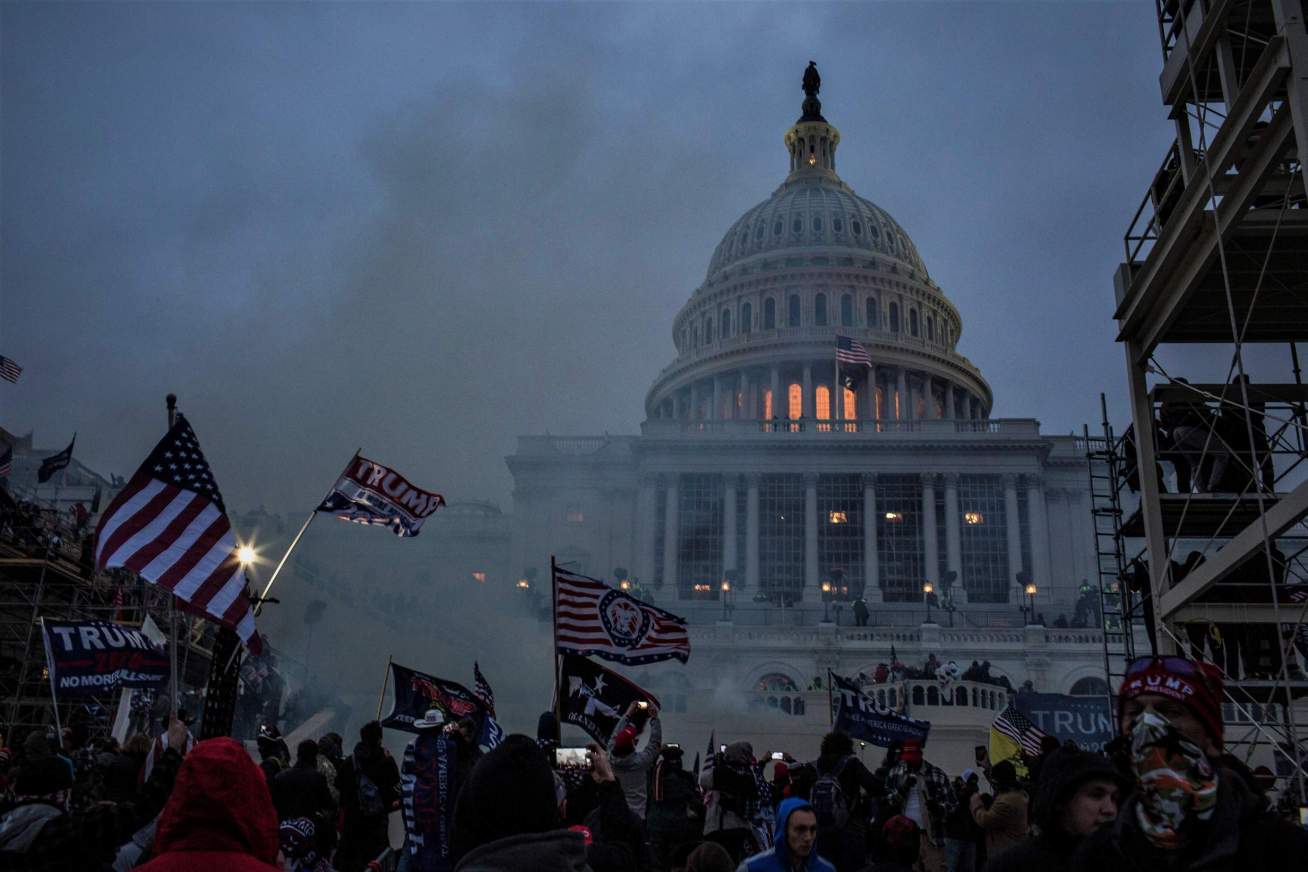 ‘Red State Secession’, a pro-Trump group on Facebook, urged its more than 7,000 followers to gather information regarding “addresses and residences of our political enemies in DC” and “their routes to and from” the Capitol.

“You had intense buy-in from the militia movement that came into DC,” Jared Holt, a visiting fellow at the Atlantic Council’s digital forensics lab, told the Telegraph. “In the run-up to it, users were sharing maps of the US Capitol; they were advising one another on how to potentially overwhelm police so that they could violate laws and enter federal buildings.”

When Trump urged the 8,000-strong crowd of his ‘Make America Great Again’ faithful to march to the Capitol by stating “you’ll never take back our country with weakness” and telling them to “show strength and “be strong” – after using the word “fight” a dozen times and moments after his personal lawyer Rudy Giuliani called an attack on Congress a “trial by combat” – the green light for this unprecedented assault on American democracy was given.

Moments later, the MAGA terrorists smashed and broke their way into the Capitol – many of whom were carrying zip ties, handcuffs, ladders, sledgehammers and crowbars, while wearing pro-Trump, QAnon and neo-Nazi paraphernalia and flying MAGA and Confederate flags.

Targeting the Vice President, they chanted “hang Pence”, vandalised and desecrated a congressional chamber and offices, and racially abused black police officers – before beating a white policeman to death with a fire extinguisher and hitting his lifeless body with Trump 2020 flags.

At the root of this violent radicalisation is widespread but baseless belief among Trump supporters in their leader’s lies and conspiracy theories about election fraud, alongside hostility towards non-white demographic change and leftward cultural drift. It is alarming enough that 70% of Republican voters believe the mistruths of a man who has told more than 30,000 documented whoppers during his presidency, but even more so that 45% of these same people approved of the storming of the Capitol, as revealed by a YouGov poll.

In other words, tens of millions of Americans – specifically a majority of Trump supporters – will believe that the incoming US President Joe Biden is illegitimate and thus political violence is a legitimate avenue for overthrowing his government. We are faced with the nightmarish conclusion that roughly 30 million Trump supporters are terrorists at worst and supporters of terrorism at best.

“To me, current conditions feel disturbingly similar to things I have seen in Iraq, Lebanon, Libya, Somalia and Cambodia,” observes Dr David Kilcullen, a former soldier and diplomat who is widely considered the world’s leading expert on counter-insurgency strategy.

He does not foresee a re-run of the American Civil War but rather “something more diffuse” and akin to the decades-long amorphous conflict that ravaged Colombia from 1948 to 1958 – an insurgency and counter-insurgency that left more than 200,000 men, women and children dead.

When the guiding ideologies and philosophical underpinnings of the MAGA movement are examined, a consortium of white supremacists, white nationalists, neo-Nazis, right-wing-militias and anti-government libertarians emerges.

If a single piece of literature can be identified as their shared guiding philosophy, it is likely to be the 1978 novel by Willing Luther Pierce, The Turner Diaries, which depicts a violent overthrow of the federal government and the subsequent extermination of non-white races. It contends that an assault on the US Congress is less about causing mass casualties, but rather about demonstrating that it can be easily attacked and that the government’s monopoly over violence is an illusion meant to pacify “true patriots”.

These groups are already mobilising and organising what they hope to be a much larger-scale assault on Washington DC, including a ‘Million Militia March’ planned for the day of Biden’s inauguration on 20 January. Twitter said that its extraordinary decision to permanently ban Trump from its platform was out of concerns of a looming “secondary attack” on the Capitol and surrounding areas next weekend, after finding streams of pro-Trump tweets urging violence.

“There’s a lot of people here willing to take orders,” a Trump supporter told The New York Times. “If the orders are given, the people will rise up.”

“We are representing the 74 million people who got disenfranchised,” said another. “We are still out here. We are a force to be reckoned with. We are not going away.”

They are not going away because, for them, Trump is the sole arbiter of truth and there is no indication that the soon-to-be former President will somehow temper his lies and vindictiveness, along with his disdain for democracy, any time soon. 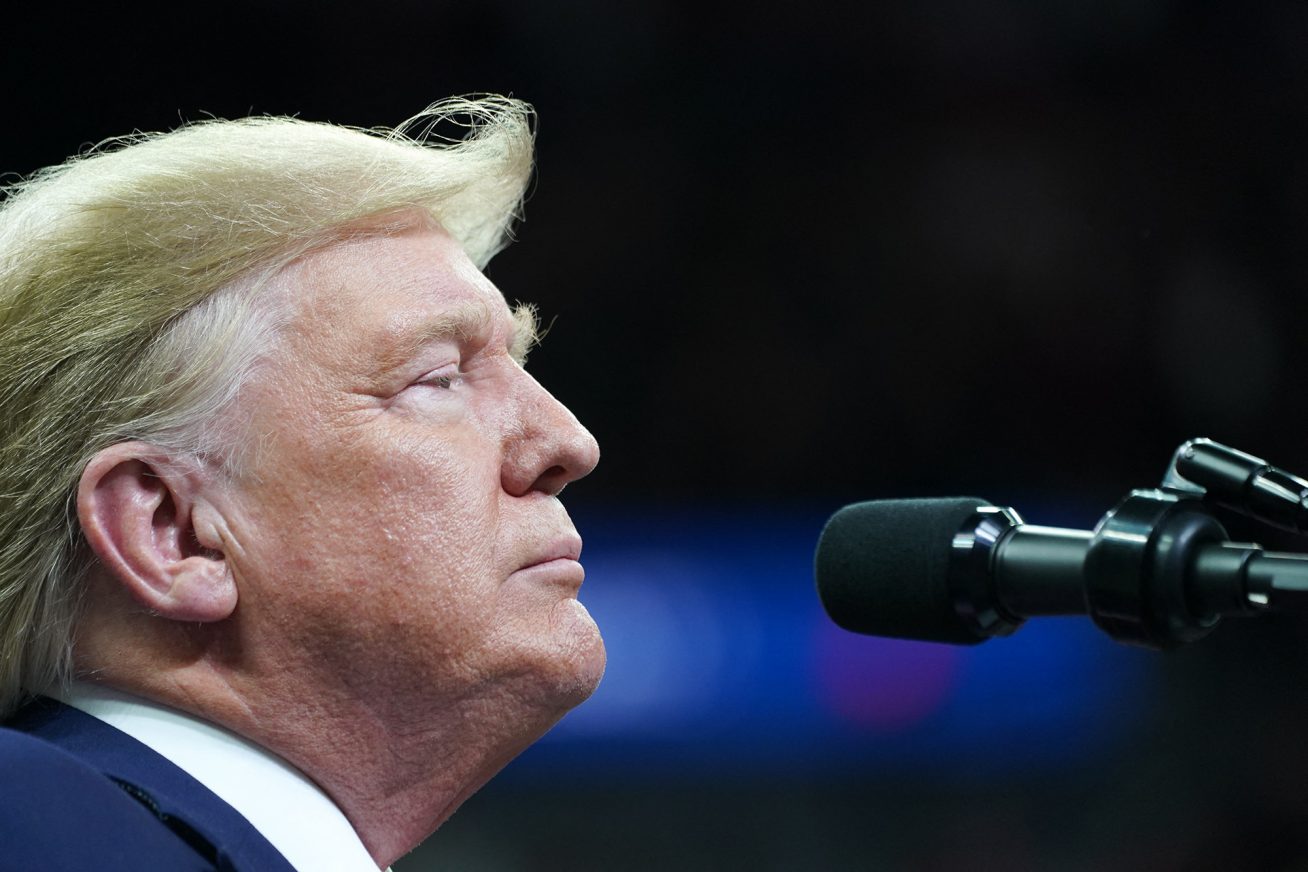 ATTACK ON THE CAPITOLTrump’s Presidency has beenDefined by Male Violence

Moreover, the Republican Party has acceded its authority to Trump’s popularity. Its leaders fully appreciate that he is far more popular than they are among conservative voters and a second or even successful impeachment is likely to do nothing to unmoor them.

When Lindsey Graham, arguably the most sycophantic of all of Trump’s congressional Republican enablers, strolled through Washington DC’s Reagan Airport the day after affirming Biden’s electoral victory, he was accosted by a group of Trump supporters who accused him of being a “traitor to the country” and warning him that “it’s going to be like this forever, wherever you go, for the rest of your life”.

While Trump no longer has access to his social media accounts, he will maintain daily call-in access to Fox News and the ever-increasing number of other conspiratorial conservative cable news networks and streaming programmes, including OAN and Newsmax, where he will propagate his lies, conspiracies and demagoguery – while calling for retribution against his perceived and imagined enemies.

He notes: “Starting as rioting in Bogota – driven by pre-existing urban-rural, left-right, class and racial divisions – violence spread to the countryside as the two main political parties… mobilised rural supporters to attack each other’s communities. Local governments weaponised police to kill or expel political opponents. Extremists joined in and ‘conflict entrepreneurs’ emerged to prolong and profit from the violence.”

The assault on the Capitol has been described as “the day that shook America”. Sadly, it is likely that far worse is yet to come.