In Argentina’s Patagonian region lies Rio Negro, a crystal blue lake called Lago Escondido. It is a sacred spot for the indigenous Mapuche, steeped in mythology and an important source of water for local communities.

But access to the site has been blocked by Joe Lewis, a British businessman and the owner of Tottenham Hotspur Football Club.

“Lewis and the Benetton group arrived in the region in the early 90s and forged strong ties to the powers that be,” Adrian Moyano, a local journalist, historian and activist said. “That involved the judiciary, local politicians and, in Lewis’ case, President Macri, by making substantial cash contributions to local hospital and institutions, winning the general public over.”

Lewis’ arrival in the region was mired in controversy from the start. According to local news sources, a local fixer for foreign investors wishing to buy land in the Rio Negro province, Nicolas Van Ditmar, spoke to Lewis about the property of the Montero family, which encircled a pristine mountain lake known as Lago Escondido (‘Hidden Lake’). Most of the members of the Montero family agreed to sell their collective property of around 14,000 hectares to Lewis for $7 million. However, one of the Montero brothers, Irineo Montero, refused.

Despite this Lewis promptly went on to complete the purchase and immediately began developing the estate, blocking access to the lake.

A Corporate-StateStitch-Up is Crushing Indigenous Communities in Argentina

Lewis’ extensive portfolio includes north London football club Tottenham Hotspur, a stake in Mitchell’s and Butlers, shares in Vans footwear, the Hard Rock Café, a Lake Nona development and the Tavistock group among others. He has a net worth of more than $5 billion, according to Forbes, and he has now has carved out what locals refer to as a small empire in Patagonia’s El Bolson, dubbed ‘Lewislandia’.

His projects have been met with fierce opposition from ecological, indigenous and social protest groups. Yet, despite the outcry and the impact on wildlife, he built an airport large enough to accommodate military aircraft. He reportedly hosts up to 10,000 IDF Israeli soldiers at his ranch every Summer. However, his most important visitor at the ranch is the former right-wing President Mauricio Macri, who he is in business with, despite Macri’s denials.

In February, locals in El Foyel, a village in Rio Negro, took to the streets in a huge demonstration opposing Lewis’ new plans for a golf and ski resort.

Named the ‘march for sovereignty’, the protest was headed up by the FIPCA Interactive Foundation for the Promotion of the Protection of Water. It was the fifth mass mobilisation against the British mogul dubbed ‘the real boss of Patagonia’. Protestors included social action groups and Falkland War veterans demanding access to Lago Escondido. “We have been threatened with consequences if we enter the property,” claimed one of the protestors.

These threats are far from empty. In 2018, two protestors campaigning for access to Lago Escondido were thrown into the lake by henchmen allegedly working for Lewis, suffering hypothermia. Lewis was contacted for comment on this allegation but declined to respond.

According to the Argentine Constitution, indigenous peoples are the legitimate owners of the southern lands where their ancestors were born. However, if the land isn’t registered as such, then it is viewed as fair game for magnates and investors keen to exploit the gas, mineral and agricultural resources in Patagonia.

Much of the land acquired by foreign investors has been achieved via perfidious means, as in the case of Sixto Gallardo, an illiterate Mapuche man who was plied with alcohol and his fingerprints added to a contract, stripping him of his right to his land. Now, 40 years on, his grandchildren have occupied their former dwellings resulting in a stand-off with the local law enforcement, known as gendarmerie. The land in dispute leads directly to the Lewis ranch.

The fingerprints of foreign interests are all over the region’s recent troubles and disappearances. Most of the violence has occurred in the context of land struggles between the indigenous Mapuche, laying claim to ancestral land, and foreign moguls who have entered the region to exploit its rich resources. In the mix are the police, who adopt whatever draconian measures they feel are necessary.

On 1 August 2017, Santiago Maldonado – also from El Foyel and a supporter of the Mapuche community – went missing after participating in a protest against the presence of multinationals in the region. His lifeless body was found in the river 72 days later.

Later, in another Rio Negro village, Villa Mascardi, Mapuche Rafael Nahuel was shot dead by the gendarmerie and three others were wounded. Another disappearance thought to be connected to the conflict is the case of Jose Alvarado, who has been missing for more than two years.

Criminalising the Mapuche’s struggle for autonomy and the right to live on ancestral land is part of the arsenal of repressive measures available to authorities who want to clear the land for mining and fracking.

Some officials have called the Mapuche Ancestral Resistance group a ‘terrorist cell’ in the region and accused its members of violent attacks on the Lewis property. The Mapuche community has denied it exists. There is no evidence to prove that it does, yet it is used to incarcerate Mapuche community leaders resisting multinationals encroaching on their land.

Shortly after former Chilean President Michelle Bachelet was criticised for her role in repressing the Mapuche people in Chile, she met with Macri and it was agreed that influential Mapuche leader Facundo Jones Huala would be extradited to Chile.

He is now in Chile’s Temuco Prison, serving a nine-year sentence under the country’s draconian terror law enacted by General Augusto Pinochet in 1984 that criminalised all form of protest. It is still in place today. 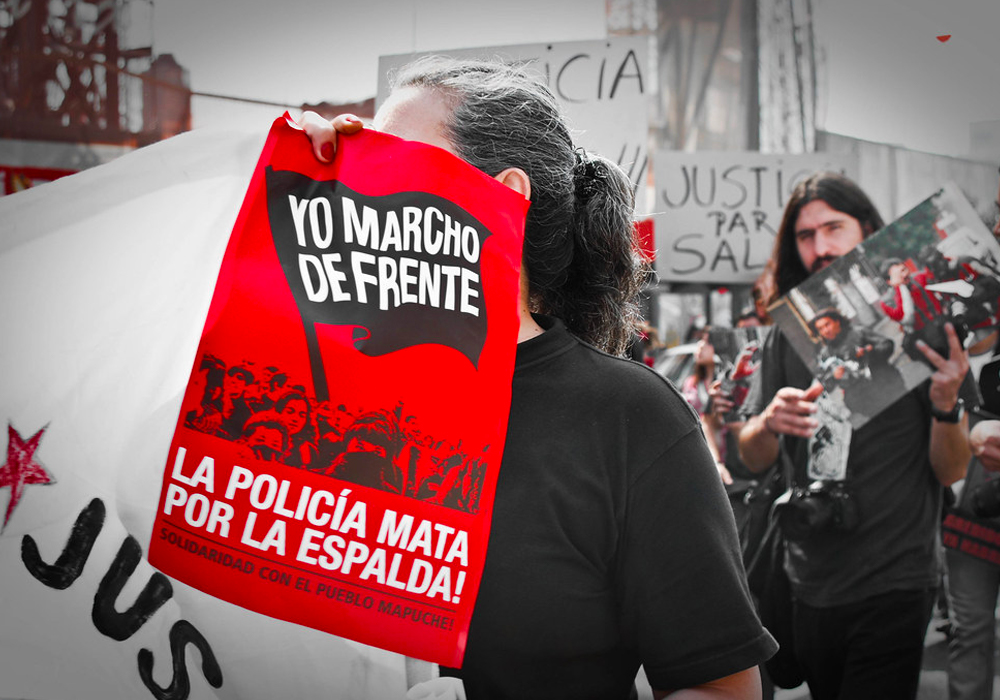 Meanwhile in Rio Negro, the presence of Joe Lewis continues to create conflict.

“This is a case of absolute impunity,” Adrian Moyano added. “Despite national calls, the lake remains inaccessible except via an 80 kilometre route down a steep mountain path. Lewis continues to block access even though the courts have demanded he reopen the path, which he ignores thanks to his economic and political power. When there have been protests, they turn violent as the police do what ever they think is necessary.”

It is hoped that the new-centre left administration under Peronist Alberto Fernandez will engage in dialogue with indigenous communities. But, while multinational speculators continue to lean on governments, the Mapuche’s struggle for autonomy and the preservation of native fauna and flora, fundamental to their way of life and medicine, remains in peril.

Byline Times contacted Joe Lewis via companies that he has ownership in: Tavistock, Tampa Energia and Edenor as well as individuals: Silvina Spector and Lucrecia Portillo who work in PR for his Argentine companies for comment. Nobody responded.